John Braun: U.S. Navy veteran, businessman, father of four, and now one of the most powerful Republicans in the state. 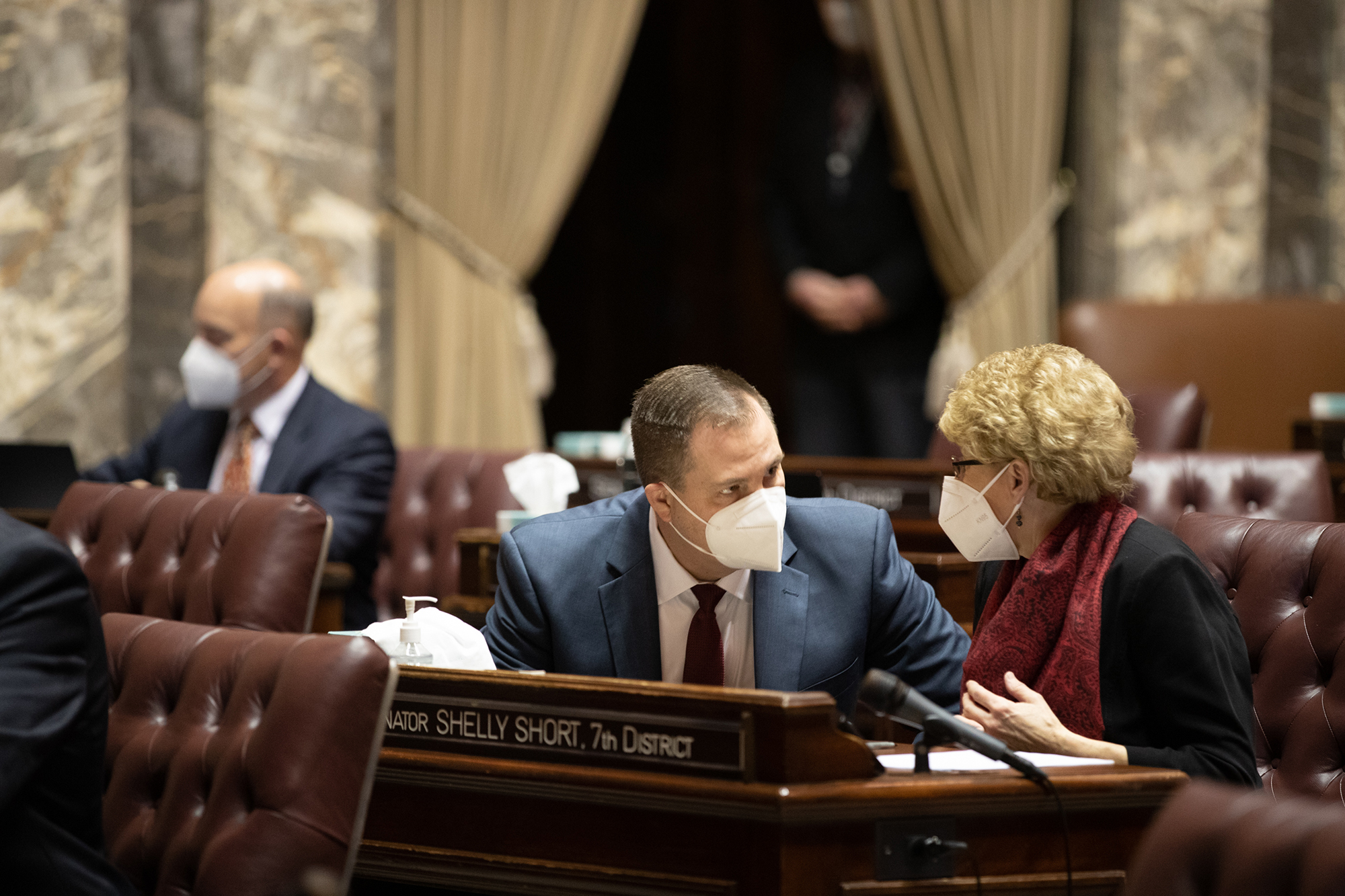 Under more normal circumstances, state Senate Republican Leader John Braun would not be in his south Chehalis office midmorning on a weekday. He would have already made himself a quick breakfast in his Centralia home, stopped by his family company, Braun Northwest, and made the drive to the state Capitol. But with the current session being held remotely, Braun spends more time in his home district, out of what he calls the “bubble” of Olympia.

From his pixelated Google Teams window in a Jan. 22 conversation with Crosscut, the 54 year-old Braun looks like any other Washingtonian.

He is dressed in three layers: a white T-shirt under a blue collared button-down, finished with a partially zipped Columbia puffer jacket that rubbed against itself as his hands spoke in quiet, controlled gestures. He keeps not one, but two stainless steel, thermal water bottles — what appear to be the Pacific Northwest staple brand, Hydro Flask — within an arm's reach.

“I’m sure there’s things people don’t know about me,” Braun says. “I’m not sure any of it’s very interesting.”

His humble demeanor gives no hint of how his GOP colleagues unanimously elected him last fall as the new Senate Minority Leader, making him one of the most powerful Republicans in the state.

Braun, a U.S. Navy veteran, businessman, father of four and University of Washington electrical engineering graduate, decided to try on yet another hat in 2012 by launching his political career.

“I’ve been in the Legislature eight years and if you go back nine years, I wouldn’t have pictured myself in this position — even an elected official,” Braun says.

In a three-way, all-Republican primary in 2012, Braun came in second to GOP incumbent Dan Swecker, who had held the position since 1995. Braun told The Daily Chronicle in Lewis County that despite a great respect for the incumbent, he believed Swecker had lost touch with the private sector during his 17-year tenure and it was time for a change.

The people of the 20th Legislative District voted for that change. In a major GOP upset, Braun, a then self-identified nonpolitician, overtook Swecker by nearly 11% of the vote.

Braun says he has tried to stay in-touch with regular folks even as he climbs the rungs of the Legislature.

Braun is the president of Braun Northwest, which was founded by his parents in 1986 and specializes in the design and manufacture of emergency vehicles. He credits the diligence of the company’s 185 employees for enabling him to simultaneously hold office in Olympia and run his company.

Even pre-pandemic, Braun made it to the facility everyday — twice, if budget negotiations didn’t keep him at the Capitol half the night. He believes his day job offers continued insight into the challenges of everyday, working people.

“I don’t work in a fancy office building – I mean, we’d like to think we have a decent facility here, but it’s shop floor work,” Braun says. “It's regular people who face regular-people challenges like day care, making sure their kids are getting a good education and finding housing at a reasonable price.”

With a background in a family-owned business himself, state Rep. J.T. Wilcox, R-Yelm, the leader of the House Republican caucus, relates to Braun.

Wilcox finds that in the minority, Republican efforts can feel fruitless. This can be frustrating for leaders like him and Braun who “grew up working hard with [their] hands” with the desire “to produce something tangible and measurable.”

In Washington state, Republicans have to reach across the aisle to accomplish anything “tangible,” Wilcox says. 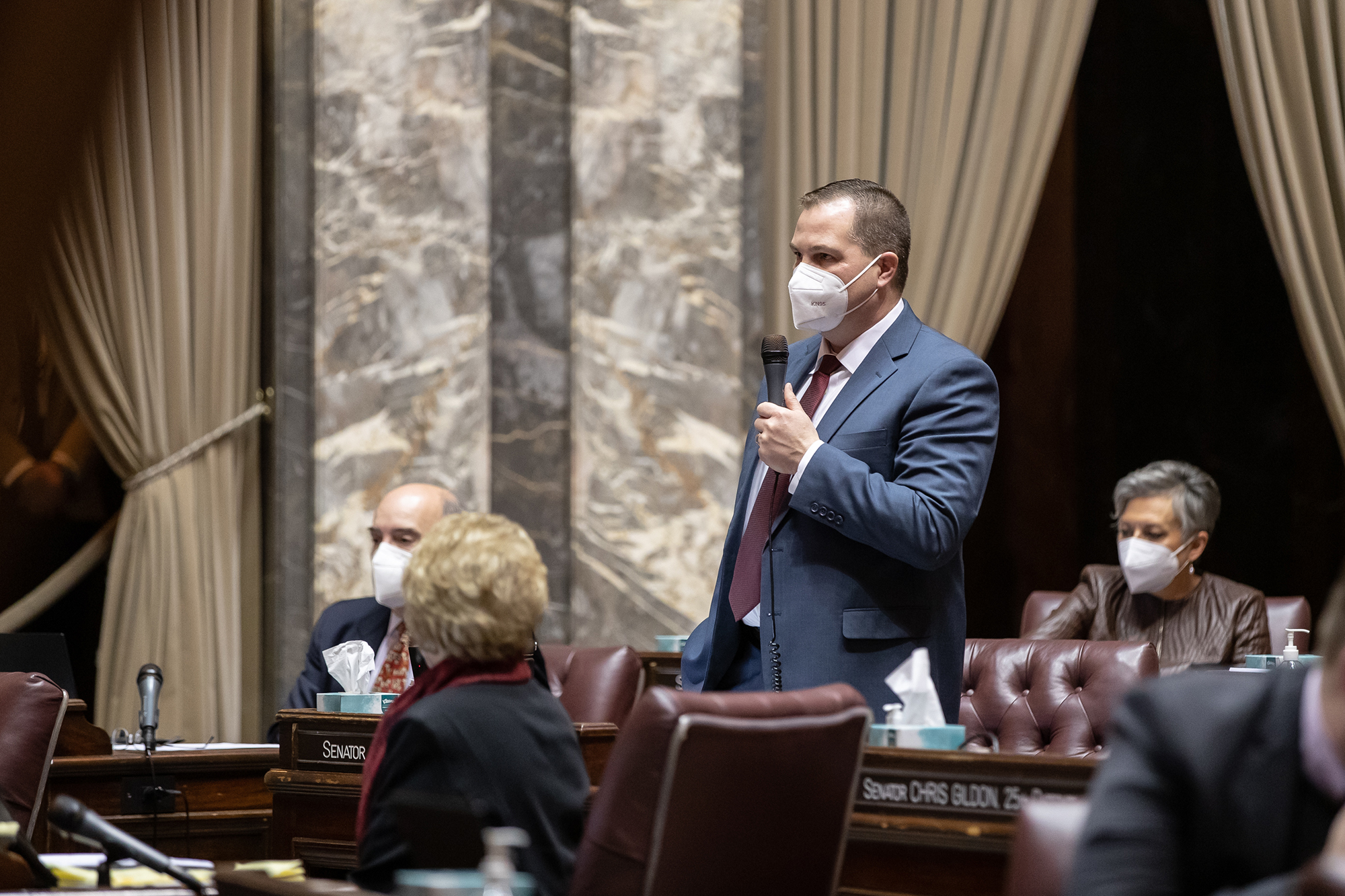 Though she refers to Braun as a “staunch conservative,” state Sen. Karen Keiser, D-Des Moines, has worked closely with him on policy she calls "nonpartisan." She describes him as a quiet actor, not drawn to the limelight of floor speeches.

Keiser admits that Braun is not someone she would normally collaborate with, but together they sponsored Senate Bill 6419 to implement recommendations from a December 2019 William D. Ruckelshaus Center report in order to better support Washingtonians with disabilities.

“[Braun] has the ability to not be ideological, to think things through, to make serious, thoughtful policy,” Keiser says. “I admire that from either side of the aisle.”

Keiser is happy to have someone like Braun as the minority leader, as he has a good working relationship with Democrats in addition to a quiet sense of humor she appreciates.

“Sen. Braun has two things: He has a sly smile and a twinkle in his eye,” says Keiser. “And when you spot that, you know he has something to say.”

According to Rolfes, after a spirited debate on the Senate floor over whether to ban plastic bags, Braun presented the bill’s prime sponsor, state Sen. Mona Das, D-Kent, with a peace offering of sorts: a reusable shopping bag his wife made out of disposable plastic bags. Rolfes said the gesture calmed the room.

Part of Braun’s vision in this new position is unity. But make no mistake: Braun is a resolute conservative.

“I think there’s a big misconception of John Braun based on his public persona of being soft-spoken and mild-mannered,” says Adam Bartz, executive director of the Senate Democrats' campaign committee. “The guy’s a far-right ideologue who gets treated as a moderate thought leader.”

Bartz points to Braun’s work as lead writer of the state budget and the drawn-out negotiations that nearly shut down the state government in the summer of 2017. Bartz also notes that one of Braun’s first actions as minority leader was to appoint Joe Fain, former state senator and accused rapist, to the Washington State Redistricting Commission.

Braun, a two-time Trump voter, is also an advocate for lifting pandemic restrictions. As part of his Economic Sense newsletter on May 9, Braun wrote an open letter to Gov. Jay Inslee in which he spoke against the governor’s COVID-19 induced shutdowns.

Braun is the primary sponsor of Senate Bill 5114, which would push the entire state through to Phase 2 of Inslee’s latest economic restart plan, and Senate Bill 5037, which would establish a metric tied to COVID-19 prevalence for the reopening of schools.

While being firm in his convictions, he is also committed to getting things done.

“It’s not like I’m inventing bipartisanship — it’s been around for a while,” Braun says. “There are places where we can agree and we should try to.”

He points to his experience with budget writing. There is no throwing in the towel over partisan disagreements when it comes to writing a state budget because, in Braun’s words, “you’re leaving with a budget one way or the other.”

Rolfes describes his negotiation style on the Ways and Means Committee as “forthright” and “intellectual,” something she believes is not always the norm in the world of politics.

She recalls Braun making proposals with a knowing laugh and the preface, “I’m not sure you’re going to like this.” To which she would often respond, “Yeah, that’s not going to work.”

Braun does not have a spotless record when it comes to playing nice with Democrats.

In 2018, campaign mailers about Democratic candidate for state senate Emily Randall hit mailboxes in the 26th Legislative District. The mailer attacked Randall’s support of then private citizen Tarra Simmons, who challenged the Washington State Bar Association in order to take the bar exam despite her felony record.

Braun is an officer for WA Forward, the political action committee that paid for the mailer. Braun never publicly apologized. According to Simmons, who is now a state representative in the 23rd Legislative District, Braun has never privately apologized either.

“It’s unresolved harm,” Simmons said. “If he did reach out to take accountability and be a person with integrity, I would absolutely want to work with him.”

Bartz says that mailer was not an isolated mistake by Braun and his team. Rather, he says, offensive ads appear to be a part of “their playbook." In the summer of 2020, the committee sent out mailers featuring a photo of then state Senate candidate T’wina Nobles, who is Black, and some people said the mailers appeared digitally altered to make her skin darker.

Bartz says these kinds of ads are not standard in the world of politics. He thinks the Kitsap Sun’s editorial responding to the 2018 ad said it best when they called for Braun to “do some real soul-searching.”

Simmons acknowledges lingering “hurt over what [Braun] has done” when she sees him virtually on the Senate floor. Though none of her bills have involved him yet, she anticipates that when they do need to communicate, there will be difficulties.

Although these mailers muddle his message of bipartisan unity, Braun does not have to reach across the aisle to cause a stir. Braun has experienced blowback from Republicans as well.

In a Dec. 18 press conference, a reporter from KOMO asked Wilcox and Braun about failed Republican gubernatorial candidate Loren Culp’s unfounded claims of voter fraud. When asked if he had a message for Culp, Braun simply said, “Who’s Loren Culp?”

Members of his own party were unhappy, and he suffered the consequences when Culp’s campaign manager gave the failed candidate Braun’s personal phone number. Between Culp and other state Republicans, Braun’s phone was “blowing up” for about two weeks.

Braun admits it was a “smart aleck” response. He knows who Culp is — he voted for him, but he was tired of answering for baseless voter-fraud allegations.

Still, as a strong believer that Washington is fundamentally purple or independent, he hopes to see a Republican governor soon.

Despite a relatively quick rise to become minority leader, Braun’s political ambition appears to end there. When asked about running for governor himself, he smiles, stammers for a moment and gives a firm “no.”

He would sooner see himself as majority leader, as his focus is flipping the Senate.

“It’s been a long time since we’ve had a Republican governor,” Braun says. “I’d love to see one, I’m happy to help, I don’t know that I’m the right guy for the job.”

Becoming governor would mean even less time at the family business, less time enjoying life with his wife, Marlo, as recent empty-nesters, and less time out of suit and tie.

And it seems like he enjoys retreating to his slice of normalcy in rural Lewis County, away from the “bubble” of Olympia.