Billions in federal aid, plus rebounding state revenue, leave legislators in a good position. Democrats are still looking to collect more in taxes. 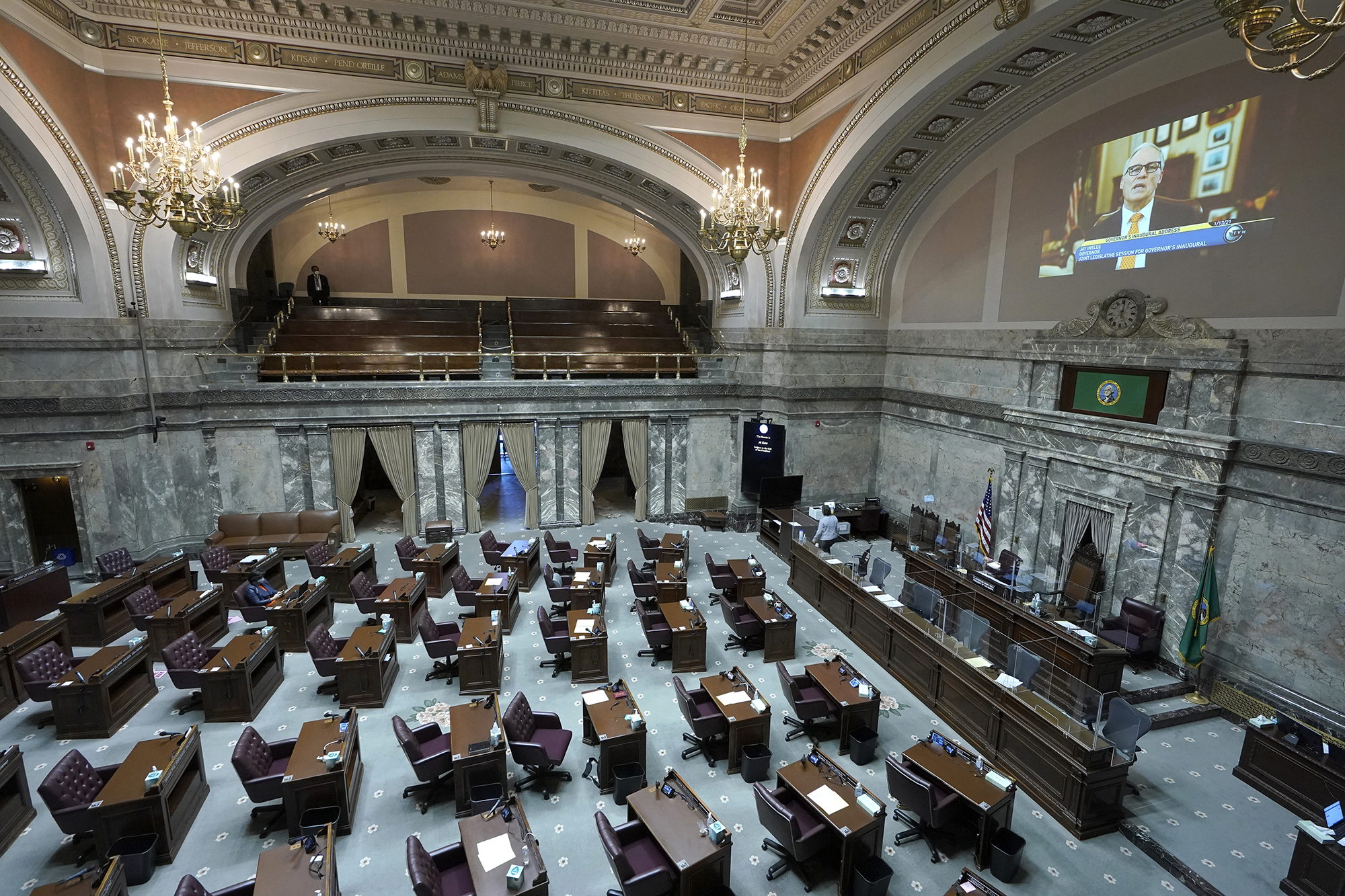 What once looked like a budget crisis for Washington state has turned into a pile of money for  legislators to spend on COVID-19 relief.

State tax collections have rebounded to roughly what they were before the pandemic. And the state has billions of dollars in federal aid money it has yet to distribute.

This week, Democratic leaders in the state Senate and the state House outlined their plans for how to spend all that dough.

Both budget proposals would mark a substantial increase from the state's current two-year, $53.7 billion budget, even without counting the influx of federal aid.

The Senate budget proposal would spend about $59 billion in state money over the next two years, on top of allocating about $7 billion in unused federal relief money.

The state House proposal would spend a little less — about $58 billion in state money — while also pushing out billions in federal aid.

The largest portions of the federal relief money would go toward reopening K-12 schools and addressing student learning loss. The Senate plan allocates $1.7 billion for that purpose, compared to $1.85 billion in the House plan.

Each chamber's budget proposal would also direct more than $1 billion in federal money toward distributing vaccines and improving the response to COVID-19.

In addition, both plans would tap about $1.8 billion from Washington’s own rainy day fund. The Senate would use the rainy day fund money to help add another $1 billion for school reopening, while using another $500 million to reduce spikes in unemployment taxes that some businesses are facing.

The House would move the rainy-day fund money to a new, separate account designed to handle unexpected needs.

“If this isn’t a rainy day, what is?” asked state Sen. Christine Rolfes, D-Bainbridge Island, the Senate’s lead budget writer.

In addition, both the House and Senate are proposing to enact a statewide tax on capital gains, Senate Bill 5096. The plan would raise about $350 million per year for improving the state’s child care system and about $200 million annually to help pay for a tax credit for low-income people.

The capital gains tax isn’t needed to balance the state budget, after the resurgence in state tax collections and the recent influx of federal relief money.

But Democratic lawmakers say enacting the tax is an important step toward ensuring wealthy Washingtonians pay their fair share to support public programs. Because Washington state doesn’t have an income tax and relies mostly on sales taxes and property taxes to pay for things like schools and social services, lower-income people can end up paying a larger share of their income in taxes — a system Democrats have criticized as highly regressive.

"The pandemic has really, I think, opened the eyes of a lot of folks about that inequity in the tax code and the economy more broadly," said state Rep. Noel Frame, D-Seattle, who chairs the House Finance Committee.

The 7% tax on capital gains would apply to profits that exceed $250,000 per year. Money from retirement accounts and real estate sales would be exempt from the tax.

If enacted, the capital gains tax will undoubtedly face a court challenge as opponents seek to overturn it, arguing it violates the state constitution. In the past, the state Supreme Court has ruled that a flat income tax is allowed under the Washington Constitution, but a graduated tax — one that taxes people at different rates based on their income level — is not.

Republicans have insisted that Democrats are pursuing the capital gains tax largely to force the court to revisit those rulings. GOP leaders argue that could open the door to a statewide income tax that goes beyond taxing capital gains.

But Democrats have countered that the capital gains tax isn’t an income tax at all, but rather an excise tax, which applies to the sale of assets. House Speaker Laurie Jinkins, a Tacoma Democrat and long time supporter of the capital gains tax, has said she is confident the measure would easily pass any legal test.

The House and Senate will need to negotiate a final budget deal, which they are expected to do before a scheduled adjournment date of April 25.

Here are a few other highlights of the budget proposals released Thursday and Friday.

Over the next two years, House and Senate leaders plan to finally pay for a program called the Working Families Tax Exemption. That rebate program, which gives money back to low-income families, was approved by the Legislature more than a decade ago, but lawmakers have never actually found the money to pay for it. Both chambers' budget proposals would spend $268 million to put the program into place, with a significant portion of that money coming from the capital gains tax.

Both budget proposals would invest heavily in upping the Medicaid reimbursement rates for health care providers. Rate increases would target primary care providers, behavioral health professionals and family planning clinics; all have said they desperately need rate increases to ensure they can continue to serve Medicaid patients around Washington state.

Each of the budget plans try to shore up the state’s underfunded public health system, with the Senate budget proposing $150 million for this purpose and the House budget including $100 million.

Another $100 million in the Senate budget would help low-income people afford health care plans through the state Health Benefit Exchange, by reducing their insurance premiums.

In the plan released Friday, House leaders proposed spending about $70 million to address the fallout from the state Supreme Court's recent Blake decision, which declared the state’s law criminalizing drug possession unconstitutional because it didn't require prosecutors to prove intent. That money would help cover counties' court costs, which are expected to increase due to the need to vacate or change people’s sentences. The money would also help cover county expenses that might arise because of the need to repay court fines that defendants have paid in the past.

The Senate budget would provide less money for Blake-related court costs — about $11 million — but also would set aside $1.2 million for the state Department of Corrections to hire temporary records staff to help manage the increased workload caused by the decision

About $300 million in the Senate budget would go toward immigrants who haven’t been eligible for other forms of COVID-19 relief money — including unemployment insurance benefits — because they aren’t U.S. citizens. The grants would be reserved for those who have been negatively impacted by the COVID-19 pandemic. This money would be on top of earlier relief the state has provided for undocumented immigrants.

The House budget would dedicate $340 million for this purpose.

Even after adjusting unemployment tax rates so most businesses won’t get slammed with huge increases this year, the state Employment Security Department still has problems.

Because so many people needed unemployment insurance payments during the pandemic, the trust fund that pays for those benefits has been drawn down considerably, automatically triggering tax increases on business owners. The Senate budget would spend about $500 million to help replenish the trust fund, blunting some of the tax increases businesses will face in the future. This money is coming from the state’s rainy day fund and will benefit businesses such as restaurants that have had especially high rates of layoffs, putting them in line for some of the biggest tax increases later this year.

The House budget would spend $600 million to soften these impending tax spikes, using federal relief money rather than the rainy-day fund. Senate leaders said they weren't sure the federal money can be used for that purpose, highlighting some of the uncertainty surrounding allowable uses of the federal aid dollars.

Both budget proposals set aside significant money to help people pay their rent and mortgage bills.

The House budget would put more than $900 million in federal aid money toward rental assistance and another $284 million toward other types of housing relief, such as foreclosure prevention.

The House would also spend $292 million in state money on other housing and homelessness programs, as outlined in House Bill 1277.

Separately, a capital construction budget proposed by Senate Democrats would spend $315 million on affordable housing projects. About $205 million of that money would come from the state’s Housing Trust Fund.

House leaders are similarly proposing a construction budget that spends about $300 million on affordable housing and shelter projects.

An older state pension plan for teachers is underfunded, and some state lawmakers would like to correct that. The Senate budget would spend about $800 million over two years to reduce the unfunded liability of the Teachers Retirement System 1 plan, which provides retirement benefits for people who entered the teaching profession before October 1977.

In the Senate budget, about $800 million in state dollars would be moved to the state’s disaster response account for the Legislature to address crisis situations like the pandemic or fighting out-of-control wildfires. Separately, about $125 million in state general fund money would go toward preventing wildfires through forest health initiatives. That’s an investment that state Public Lands Commissioner Hilary Franz has been working to secure for several years.

The House budget, too, includes the $125 million for forest health initiatives.

Additionally, the House would move the entirety of the state rainy day fund into a new, separate disaster relief account. Once the money is in this new account, it could be spent more easily than if it remained in the rainy day fund, which requires a 60% vote of the Legislature to access in most circumstances. House Majority Leader Pat Sullivan, D-Covington, said the idea is to give lawmakers "more flexibility" in how the money can be used.

A separate transportation budget is also being discussed that would pay for road maintenance, new highway projects and some public transit programs. Democratic lawmakers are negotiating how to pay for all those needs, with talks underway about possibly using revenue from a new cap-and-trade program, or alternatively, from a tax on carbon emissions.

The Senate also released a $6.2 billion capital construction budget on Thursday that would spend about $490 million to expand broadband internet service throughout the state. Most of that money comes from the federal government.

The Senate capital budget would also spend about $406 million on investments in behavioral health facilities, including $191 million for construction of the University of Washington Behavioral Health Teaching Facility. Additional money would go toward expanding community treatment centers that can serve people with mental health disorders.

The House capital budget would similarly spend about $420 million on behavioral health projects, to include adding community mental health beds and building the UW teaching hospital.

This story has been updated to add more information about the House budget and the transportation and capital budgets, as well as money for immigrants who lack U.S. citizenship and responses to the Blake decision.