Far-right GOP state senators form their own caucus in Olympia

The leaders of the new Freedom Caucus say they just want to make sure their viewpoints are heard, but some Democrats take issue with that name. 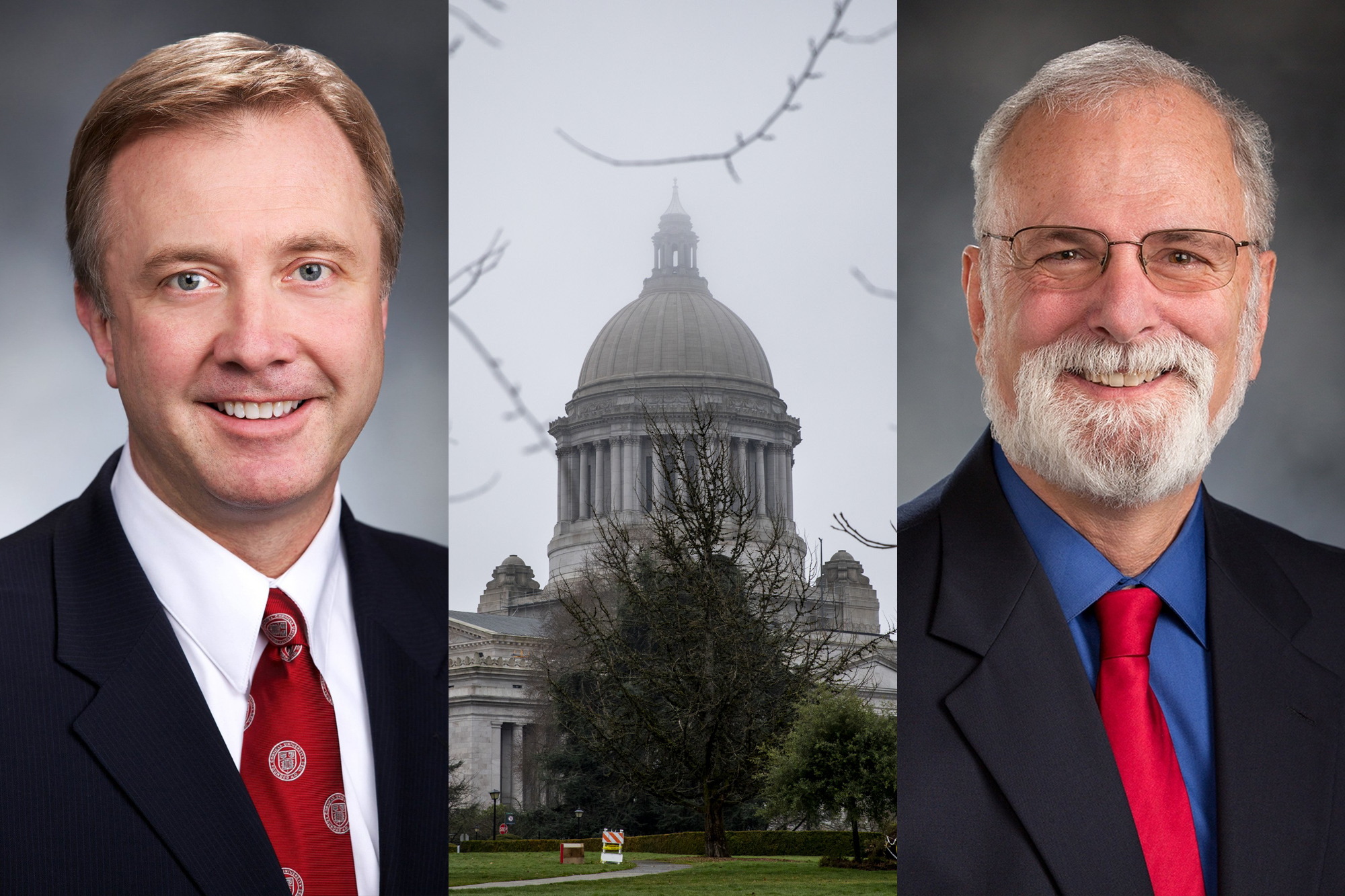 On Feb. 4, four of the most conservative state senators in Olympia announced that the Freedom Caucus movement had touched down at the Washington State Capitol, joining seven other state caucuses taking inspiration from the U.S. House Freedom Caucus.

In an inaugural press conference, members described the new caucus as a small subgroup advocating for much of the same policies as Senate Republicans in general, with a focus on combating government intervention: lowering taxes, lifting COVID-19 restrictions and pushing against what they call the left’s “radical agenda.” At the same time, members also characterized the caucus as a “big tent” policy-making space.

Although the broad description seemed designed to dampen concerns that lawmaking in Olympia would soon be marked by the division seen in the nation’s capital, both Democrats and more moderate Republican leaders seem concerned about this new caucus.

According to Washington Freedom Caucus member Sen. Doug Ericksen, R-Ferndale, the goal was not division of the Republican Party, but inclusion of freedom-oriented lawmakers across party lines in what he calls a “big tent.” But their Democrat critics seem to view the caucus’ existence as more of a rejection of inclusivity.

“When you’re used to privilege, equality feels like oppression,” state Sen. Joe Nguyen, D-West Seattle, said. “It’s not an accident that we have the most diverse Legislature in the history of Washington state, and now they are putting together this ‘White Fragility Caucus.’”

Washington Freedom Caucus members Ericksen and Sen. Phil Fortunato, R-Auburn, say members are not “rebels in the Republican Caucus.” However, there are ways in which the founding members — who also include Sen. Jim McCune, R-Graham, and Sen. Mike Padden, R-Spokane Valley — don’t fall in step with their moderate colleagues.

Several members are calling for an end to mail-in voting despite Republican Secretary of State Kim Wyman’s solid support for the system.

In 2016, Ericksen served as deputy director of former President Donald Trump's campaign committee in Washington state. That same year, he proposed a bill to criminalize what he deemed illegal protesting.

Fortunato took an unconventional approach to gun rights in 2019 when he introduced a bill that would have required legislators to complete advanced firearms training in order to propose gun control legislation.

Padden is also no stranger to straying from the pack. In 1976, he acted as a “faithless elector” when he cast his Electoral College vote for Ronald Reagan instead of Gerald Ford after the November election for president. In the election, Washington voters chose the incumbent, Ford. President Jimmy Carter won that race. Reagan was not on the general election ballot until 1980, but Padden likes to say he was ahead of the curve. Padden has also railed against abortion rights.

“It sort of mirrors the national story: The Republican Party seems to be dividing,” said Seferiana Day, a political strategist at Upper Left Strategies who works with Democratic candidates. “There’s not a clear path forward for the identity of the Republican Party right now.”

In 2015, nine hard-line conservative members of the U.S. House of Representatives banded together to form an invitation-only alliance they called the Freedom Caucus. They quickly grew their ranks to about 40 members, creating a far-right bloc strong enough to shape debate, tank legislation and pressure Republican leadership. In effect, they dominated the discussion in the House.

The Washington Legislature — dominated today by the Democratic Party, but long known for bipartisan cooperation on many issues — is more than 2,000 miles away from the legislative body in the nation’s capital.

And while the Washington Legislature is still whiter than the state population, it is the most diverse it has been in history so far. As of 2021, members of color make up 33.3% of House Democrats and 28.5% of Senate Democrats. The Secretary of State's Office identifies only 17 Black lawmakers who served in Washington's Legislature before 2013. There are currently nine Black legislators, after Black women made historic strides this past November.

With this increase in racial diversity comes “bolder, more progressive” policy, according to Day, the Democratic political strategist. She cites the proposed wealth tax and capital gains tax as the kind of policies that scare even the moderates, but may be possible in today’s Legislature.

On Tuesday, the caucus held a news conference to call for responsible spending of federal stimulus dollars. Ericksen said the most recent stimulus bill out of Congress was "packed with pork."

After Initiative 1185 to require a two-thirds vote to raise taxes passed by a large margin in 2012, Ericksen knew there was a demand for his concept of freedom beyond the Republican Party.

“It’s not Tim Eyman voting 2.5 million times,” Ericksen said of I-1185. “It's a coalition of Republicans, Democrats, independents, moderates who come forward and vote for this.”

What is the mission?

Sen. Jamie Pedersen, D-Seattle, the most senior member of the LGBTQ Caucus, and Nguyen, co-chair of the Senate Members of Color Caucus, do not expect Democrats to join Ericksen’s group or that their respective caucuses will build coalitions with the new GOP spinoff.

Beyond the word “caucus,” Nguyen sees no connection between the Freedom Caucus and caucuses like his own.

Pedersen has a history of advocating for the freedom of marginalized people. Before he was elected in 2007, he served as co-counsel on the Andersen v. King County case, which sought the right for same sex couples to marry in Washington state.

Pedersen believes, in what he calls a “Pollyanna way,” that the LGBTQ Caucus is also a Freedom Caucus — just a different kind of freedom.

“Freedom is a word that means different things to different people, so they are free to use the word and invoke those ideas and so are we,” Pedersen said. “Our concept of freedom has certainly been more successful in gaining public support.”

Alex Hays, a Republican political consultant from Tacoma, said the use of the word “freedom” is a good branding choice. (“No one ever calls themselves far right: ‘We are a part of the extremely unreasonable caucus,’ ” he joked.). Nguyen said the name begs the question: “Freedom for who?”

“The point of every other caucus is to raise awareness for issues that support communities that are historically underrepresented,” he said. “Last time I checked, white men were not underrepresented minorities.”

For Freedom Caucus folks, their group rose out of  a shared unpopular opinion.

In April 2020, during the early days of the COVID-19 pandemic, Fortunato was at odds with Senate Republican leaders when he strenuously objected to extending Democratic Gov. Jay Inslee’s emergency proclamations. He said he did not believe the health crisis justified emergency powers, which was a driving message in his campaign challenging Inslee for the governorship.

Fortunato was not alone. Three of his Republican colleagues, all future Freedom Caucus members, also opposed the extensions. The first action of the alliance involved calling on Republicans to refuse to extend the governor's emergency proclamations as leverage for a call to a special legislative session.

By the end of May, Fortunato claimed, it looked as though they had succeeded. Senate Republicans resolved to not extend the proclamations past June 17. According to Fortunato, two days after that meeting, Republicans in the Senate changed their minds.

Republicans from both chambers sent a letter to the governor demanding a special session without using what Fortunato called “the hammer”: threatening to not extend the proclamations. Fortunato said the letter might as well have been addressed to Santa Claus.

There are 54 names of Republican lawmakers on that letter, none of which are the four founding members of the Freedom Caucus. After that, the four senators felt compelled to make a formal political distinction.

“It ticks me off when I get an email that says, ‘You guys are doing this,’ and it's addressed to 147 legislators,” Fortunato said. “Don’t send me an email like that! Don’t include me in that!”

But so far, the Freedom Caucus and its principles appear to be accepted by the general Senate Republican Caucus.

According to Hays, the Republican political consultant, moderate Republican leaders make a solid effort to include the more conservative Freedom Caucus members. He noted their leadership positions: Ericksen, Fortunato and Padden are all ranking members in committees.

Senate Minority Leader John Braun, R-Centralia, told The Olympian that most senators support the ideals of the subgroup. He does not believe the formation of the caucus is “intended as commentary on [his] leadership.”

The difference between the Senate Republican Caucus and the new subgroup does not appear to be ideological, according to Hays, but rather based on “temperament” and “aesthetic.”

“[Moderate Republicans] think it is our mission to persuade people in the middle to choose us over Democrats,” said Hays, a past executive director of the Mainstream Republicans of Washington, a moderate GOP group. “There’s another theory out there that if we offer a bolder, more dramatic contrast — something more ‘Freedom Caucus-y’ — then voters will choose us because we are offering a different answer.”

Because Fortunato represents a relatively conservative district, he said he can take this more “hardcore” approach, while he agreed that the Senate Republican Caucus needs to appeal to a broader demographic.

In combination with moderate Democrats losing their seats to progressive challengers, moderate Republicans may see this moment as a wake-up call, according to Day.

“There’s definitely a question of whether or not there’s room for moderates in Washington state,” Day said. “If this Freedom Caucus grows, will it become the litmus test for being a part of the Republican Party?”

Correction: Fixes a link and corrects to say that Sen. John Braun spoke to The Olympian about the Freedom Caucus.