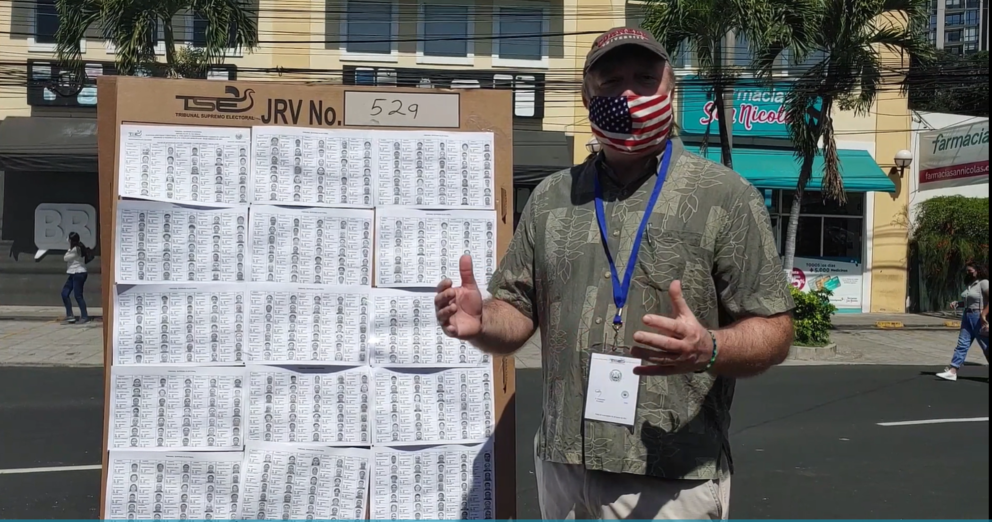 State Sen. Doug Ericksen, R-Ferndale, explains his trip to El Salvador to observe the country's Feb. 28 election in this screengrab from a video he posted after he returned from his trip. Ericksen missed several legislative votes and also had difficulty connecting to at least one Senate floor session during his time away.

The look of mortification on state Rep. Mike Sells’ face after he swore during an online town hall is probably how many of us have felt during Zoom mishaps over the past year.

But Sells’ slip was perhaps unique in that, after he cussed out a town hall participant, he immediately got a phone call informing him of his mistake — a call that was also caught on camera.

“Mike, you’re still live on Facebook,” the voice on the other end said, as Sells listened on speakerphone.

At times, lawmakers have had trouble logging in to vote. Muting fails have been regular occurrences, causing noise and activity from people’s homes or offices to spill into legislative meetings. On at least one occasion, unwanted guests have spewed racist and homophobic slurs during a virtual press conference.

Here are a few notable Zoom and Facebook Live fails that have occurred during the 2021 legislative session, the first that Washington lawmakers have conducted mostly online. This is not an exhaustive list; if there’s a major blooper you think we missed, email melissa.santos@crosscut.com. The Legislature is scheduled to adjourn Sunday.

Warning: This video contains profanity. State Rep. Mike Sells, D-Everett, cursed at the end of an online town hall in February, not knowing he was still broadcasting on Facebook Live.

Sells, D-Everett, told Crosscut that during his caught-on-camera moment, he was griping about how a town hall participant — one apparently named Solomon Kane — had made belittling comments toward one of Sells’ female seatmates. One of those comments referred to the female lawmaker as a “little girl,” Sells said.

Sells’ unfiltered comment — that he had wanted to say, “F--- you, Solomon Kane” — was what was captured on camera at the end of the Facebook Live broadcast.

In a phone interview this week, Sells said he regrets saying it that way, but he doesn’t regret feeling angry about what he described as “trolling” behavior.

“It was not very professional of me but it caught my feeling at the moment,” Sells said Tuesday.

He’s been much better about muting himself in the days since, he said.

“For me, ever since then, I have always been looking at the mic thing and double-checking,” Sells said.

Crosscut reached out to multiple people who use the name Solomon Kane on Facebook to ask about this incident. One replied, “No comment," before later saying he didn't remember if he participated in the town hall or not.

The inaugural press conference of Washington state’s conservative Freedom Caucus had some unexpected guests back in February.

When the time came for press questions toward the end of the news conference, an unwanted interloper began playing a profane rap that included several references to the male genitalia.

Before signing off, state Sen. Doug Ericksen, one of the Freedom Caucus members, addressed the Zoom bombing, the common term used to describe these kinds of incidents.

“It’s not a party until you get people like that to show up,” said Ericksen, R-Ferndale. “It’s the highlight of what we’re working against here in Washington state.”

Later, one of the Zoom bombers repeated racist and homophobic slurs until the press conference was quickly shut down. 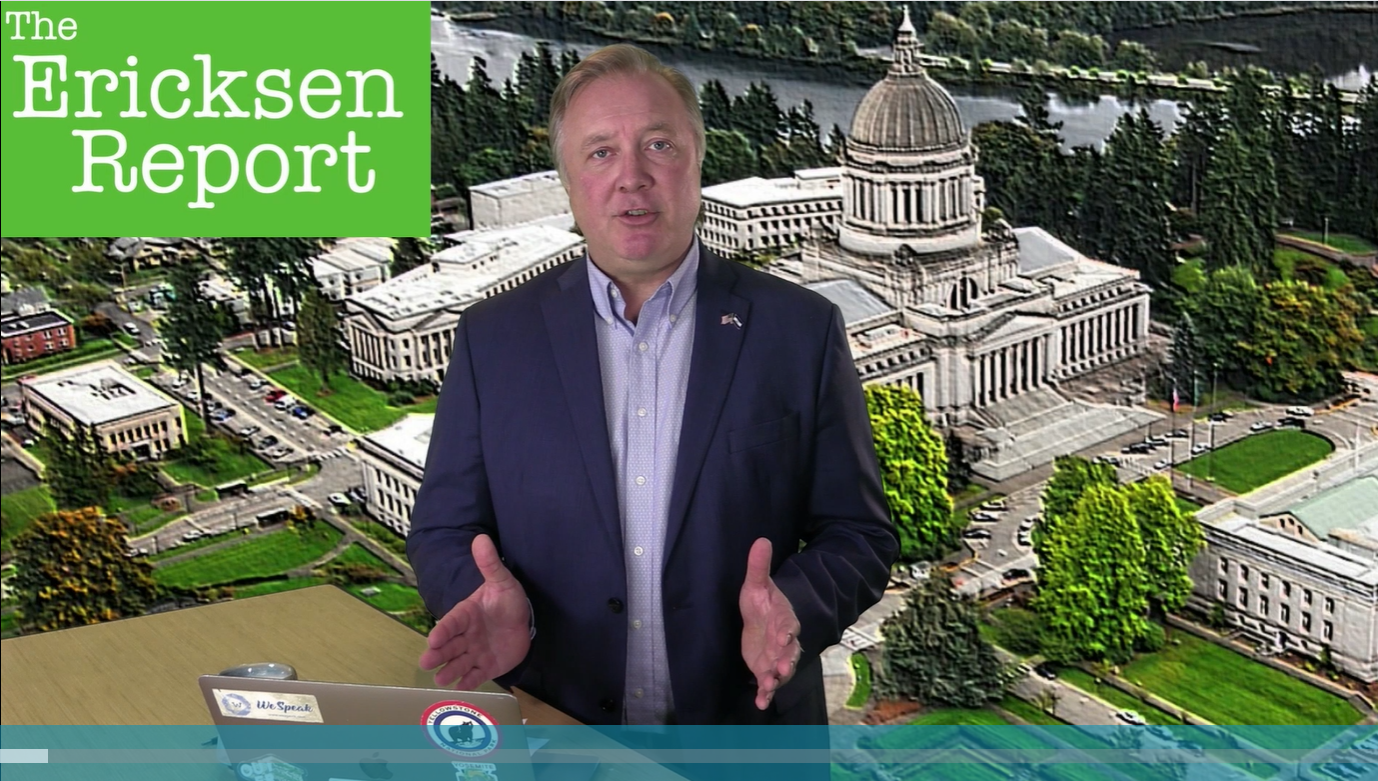 State Sen. Doug Ericksen, R-Ferndale, explained his Feb. 28 trip to El Salvador in a video he uploaded after returning from his trip. He missed some votes while away observing the Central American country's election.

State Sen. Doug Ericksen, R-Ferndale, explained his Feb. 28 trip to El Salvador in a video he uploaded after returning from his trip. He missed some votes while away observing the Central American country's election.

Ericksen also recently had trouble logging in to a Senate floor session to speak on amendments he was proposing to a bill.

The reason, however, didn’t appear to be simply a network error at Ericksen’s home in Whatcom County. He was actually in El Salvador at the time, McClatchy’s Sara Gentzler reported.

There isn’t a Senate rule saying that senators can’t be out of state when attending remote floor sessions. However, Ericksen did miss a series of votes during the dates he appeared to be in El Salvador, according to McClatchy’s reporting.

In a video explaining the reason for his out-of-country trip, Ericksen said he was there observing the country’s Feb. 28 election. Ericksen previously courted controversy when he flew to Cambodia and observed that country’s election, despite being advised by U.S. diplomats that his presence could serve to legitimize an election that was neither free nor fair.

Ericksen didn’t respond to a text message from Crosscut seeking additional information about his trip to El Salvador or his difficulty connecting to floor sessions while there.

One of Ericksen’s colleagues, however, gave a floor speech at the time noting that Ericksen’s constituents were poorly served by him not being able to participate. Sen. Mike Padden, R-Spokane Valley, used Ericksen’s absence to argue that the Legislature should convene in person again. Padden later told McClatchy that he didn’t know Ericksen was out of the country at the time.

In this video, state Sen. Rebecca Saldana, D-Seattle, speaks during an April 6 committee meeting. Saldana logged into the meeting while driving her car; she later apologized for doing so. (Video from TVW)

State Sen. Rebecca Saldaña, D-Seattle, made headlines earlier this month when she logged into a Senate Transportation Committee meeting while driving.

While Saldaña didn’t appear to be looking directly at the video screen while she spoke about the transportation package she was working on, she did appear to violate a state law that bans the use of video while driving.

Saldaña said in a prepared statement that she made a bad decision while juggling work and parenting responsibilities. She apologized and said she will pay a traffic fine if she is cited for violating the law.

“I sincerely regret having made this choice, and I do not condone distracted driving or the violation of our state's traffic laws for any reason,” Saldaña said.

At least one other senator has logged into official legislative meetings while driving. Senate Minority Leader John Braun, R-Centralia, briefly turned on video while he appeared to be driving so he could vote during a Senate Ways & Means Committee meeting on March 23. A spokesperson for Braun said the senator didn’t have a statement to make on the matter.

Senate rules require that senators use their video function to vote during committee meetings, meaning voting using only the audio function would violate the rules. During the March 23 meeting, Braun didn’t leave his video on for an extended period of time while operating his vehicle.

Freshman state Rep. David Hackney, D-Tukwila, had a little difficulty during a floor vote early in the legislative session.

He was called upon to clarify his vote after he apparently didn’t put it through using the House’s electronic voting system.

Then, audio came through of Hackney talking to someone else on the phone. Hackney seemed to be trying to locate a missing check or figure out some aspect of his finances. “I don’t think I got paid,” Hackney said at one point.
House Speaker Laurie Jinkins, D-Tacoma, had to ask Hackney multiple times, “How do you vote?” before he told the person on the other line, “Sorry, I’m supposed to be voting.”

In a written statement, Hackney called the slip up "a rookie mistake early in session, when I was not fully adapted to the Zoom environment."

He eventually voted yes on the bill, which dealt with foreclosures.

Sometimes people would sign in to testify sideways. Other times, their video feeds cut off part of their faces.

On occasion, lawmakers also played tricks on one another. State Rep. Drew Hansen, D-Bainbridge Island, wrote on Twitter that he once switched his colleagues’ background to a Minecraft theme, forcing “all the Democrats on the House Appropriations Committee to have a caucus meeting alongside little buzzy bees etc.”

State Rep. Sharon Shewmake, D-Bellingham, said at one point her young child sat behind her computer during a legislative break and, when she returned, he was chatting up legislators on both sides of the aisle.

Other children have also made occasional appearances.

“Is it super unprofessional that I wave at Rep. @NoelFrame’s adorable baby in House Appropriations (via Zoom)? I vote right after Rep. Frame so cute baby right there on my screen and I HAVE TO WAVE,” Hansen tweeted March 31.

Sometimes, he said, the baby waves back.