The future of WA transportation hinges on carbon pricing debate

Top legislators want to put a price on carbon to raise money for transportation projects. But with time running out, they can’t agree on the details. 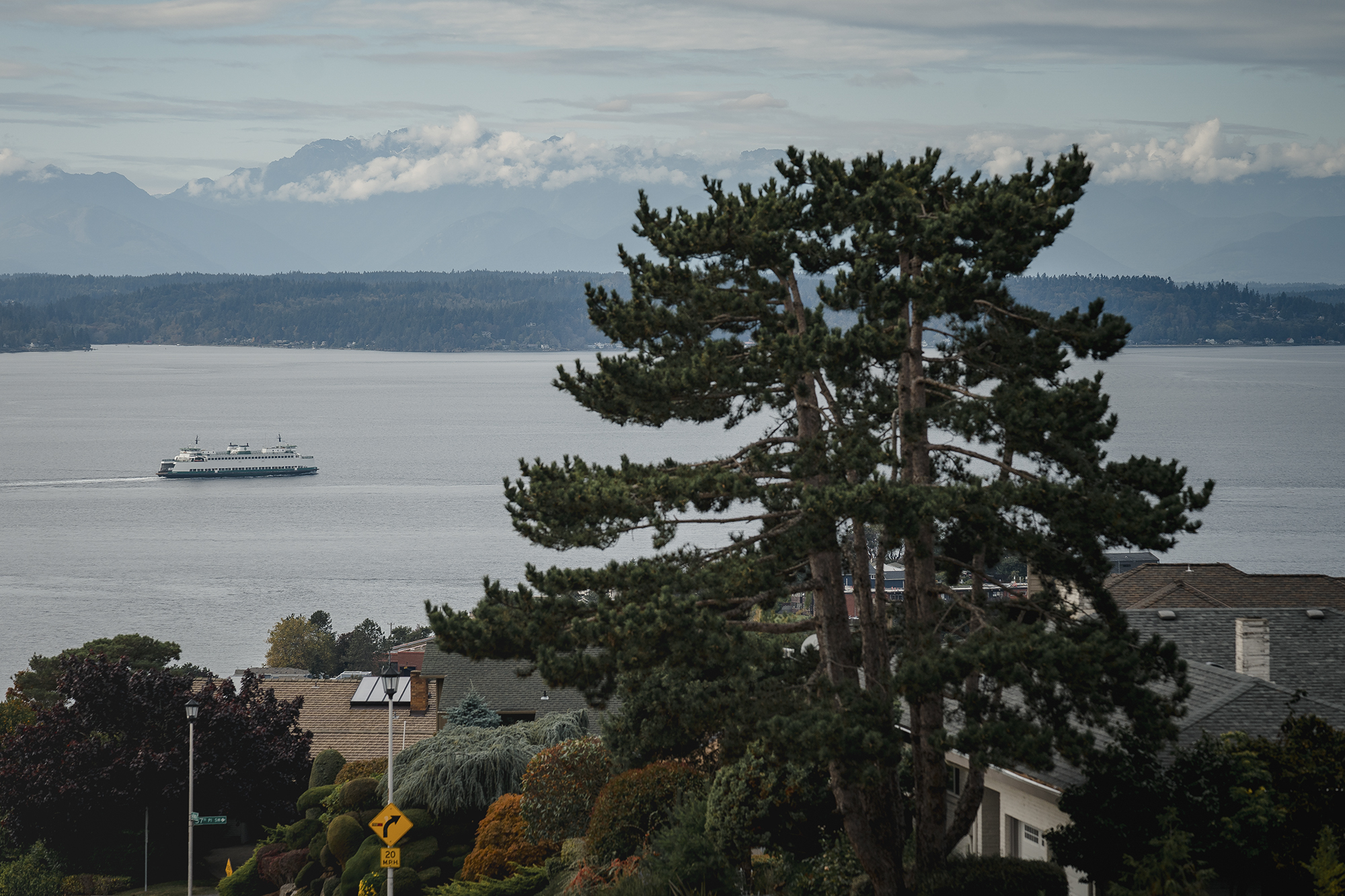 A ferry crosses the Puget Sound on Thursday, Oct. 15, 2020, as seen from West Seattle, Wash. (Jovelle Tamayo for Crosscut)

A new bridge over the Columbia River at Interstate 5. Improvements to the state's ferry system. A new State Route 2 trestle in Snohomish County. Replacing culverts that block fish passage throughout the state.

Washington state lawmakers hope to pass a new transportation tax package to pay for all these things. But this year, lawmakers want to try to improve the environment while paying for the state’s transportation infrastructure needs.

So far, however, they can't agree on the right approach to putting a price on carbon emissions. Many House members prefer a carbon tax, while Senate leaders are advancing a cap-and-trade model.

If the two chambers can't iron out their differences by the Legislature’s scheduled April 25 adjournment, transportation projects such as a new I-5 crossing over the Columbia River may be put on hold for another year — or maybe even longer.

“I’m feeling nervous,” said state Sen. Steve Hobbs, D-Lake Stevens, who chairs the Senate Transportation Committee. He said he thinks many lawmakers may not want to vote to raise transportation taxes next year, when most of them are up for re-election, making the next 10 days vitally important.

Last week, Hobbs proposed a $15 billion, 16-year transportation tax package that would rely on about $5 billion in revenue from a cap-and-trade bill. That cap-and-trade proposal, Senate Bill 5126, cleared the Senate on April 8. A previous transportation revenue package from the state House would have relied instead on a carbon tax.

Hobbs said passing a transportation package this year is crucial to help stimulate the economy as the pandemic wanes, as well as ensure the state’s roads and bridges aren’t crumbling. Both chambers are proposing $25 million to repair the cracked West Seattle Bridge, among dozens of other projects.

“We’ve really got to get people back to work, we’ve got to get jobs going,” Hobbs said this week.

Leaders of both chambers also want to spend hundreds of millions of dollars to convert some of the state’s diesel-burning ferries to ones that run on electricity, as part of an effort to reduce carbon emissions from transportation.

At the same time, revenue from the gas tax, which has been the main source of state money for roads and other transportation infrastructure, is down, largely due to people driving less during the pandemic and drivers switching to more fuel efficient vehicles. That has made carbon pricing an attractive new option for raising money.

Some transportation projects, including trails, bike lanes and public transit investments, can’t be bought using gas tax revenue, putting additional pressure on lawmakers to find a new source of money to pay for them.

House Transportation Chair Jake Fey, D-Tacoma, wrote in a text message this week that he thinks the cap-and-trade bill — also called “cap and invest” — “needs a lot of work.” Still, he said talks are underway to see if it can be amended to help cement a deal on a transportation package.

Some of his colleagues remain skeptical. Last week, 17 Democratic members of the state House wrote a letter urging leaders to advance a rival carbon tax proposal, Washington STRONG, to pay for transportation projects instead.

Those lawmakers characterized a carbon tax as more “straightforward” and predictable than cap and trade. They added that in the eyes of many Washingtonians, a carbon tax would be “more fair, transparent and would raise sufficient revenue to address climate change.”

The carbon tax established by Washington STRONG would establish a tax of $25 on each metric ton of greenhouse gas emissions, increasing the price of pollution annually by 5% plus inflation.

By contrast, the cap-and-invest bill would set a statewide limit on pollution as well as specific limits for individual polluters. Companies would buy allowances corresponding to the amount of pollution they are allowed to emit. Companies that pollute less than their allotment could sell their unused allowances to other companies that aren’t able to reduce their pollution as quickly. The total number of pollution allowances statewide would decline over time as the pollution cap is reduced. Money from the sale of allowances is what Hobbs’ plan would use to pay for transportation projects.

Supporters of the cap-and-trade approach question whether a carbon tax would be as effective at curbing pollution, since the tax wouldn’t be tied to an emissions cap that is lowered over time.

State Sen. Reuven Carlyle, the sponsor of SB 5126, said that for a carbon tax to be successful at getting the state to net-zero emissions by 2050, every cent of the tax money must be spent on emission-reduction programs. On top of that, he said, people would need to change their behavior in response to the rising cost of fuel — something he doubts would actually happen.

“When we saw gas prices hit four-and-a-half dollars a gallon years ago, we didn’t really see a meaningful reduction,” said Carlyle, D-Seattle. “It just made it more painful for the public.”

There’s also the reality that voters have rejected a carbon tax at the ballot box twice in the past five years. Carlyle said he thinks if the Legislature passed a carbon tax like Washington STRONG, opponents would launch a successful referendum effort to overturn it.

Critics of cap and trade, however, say the policy would allow polluters to skirt emissions limits by letting them use offsets to satisfy up to 8% of their pollution reduction obligations.

These offset credits could be earned by investing in greenhouse-gas reducing projects elsewhere, such as carbon sequestration in a forest far away from the site of a company’s actual pollution.

Those are the kind of loopholes that could allow polluters to continue emitting greenhouse gases in neighborhoods that are disproportionately made up of people of color, some critics of the plan testified at a public hearing Wednesday.

“All our members want is to live in a healthy community, free from environmental injustice and pollution,” said Jill Mangaliman, executive director of Got Green, a South Seattle-based grassroots organization led by people of color and low-income people. “Do not trade our futures away.”

Others, including the Washington Black Lives Matter Alliance and leaders of many of the state’s tribes, voiced support for cap and trade, saying people of color are bearing the brunt of the effects of climate change and need a statewide policy to combat those dire impacts.

State Sen. Rebecca Saldaña, D-Seattle, said in a written statement that she and others have woven environmental justice language into the cap-and-trade bill to try to protect low-income people and communities of color. One of those additions would allow the state Department of Ecology to reduce the use of offsets if emissions reductions goals aren’t being met. Another provision would give the Ecology Department the authority to regulate other health-harming pollutants — such as particulate matter — in overburdened communities.

It’s a lot for the Legislature to work through in the next 10 days. But state Rep. Joe Fitzgibbon, a Seattle Democrat who chairs the House Environment and Energy Committee, said he was “cautiously optimistic” this week that lawmakers could reach an agreement on both the cap-and-trade bill and a transportation package.

One remaining sticking point is how closely to tie the money from cap and trade to transportation projects that reduce carbon emissions, versus allowing some of that money to be spent on highways.

Fitzgibbon and Fey said some House members also feel the Senate plan would spend too much money overall on highway projects, as opposed to spending more on public transit and projects such as sidewalk improvements and bike lanes.

“We have a more progressive caucus that is going to be looking for different things,” Fitzgibbon said this week. “There’s a lot of really serious questions … and we’re just racing to try to resolve those as fast as we can.”