Help for renters and homeowners is on the way as the state’s eviction moratorium is set to expire June 30. 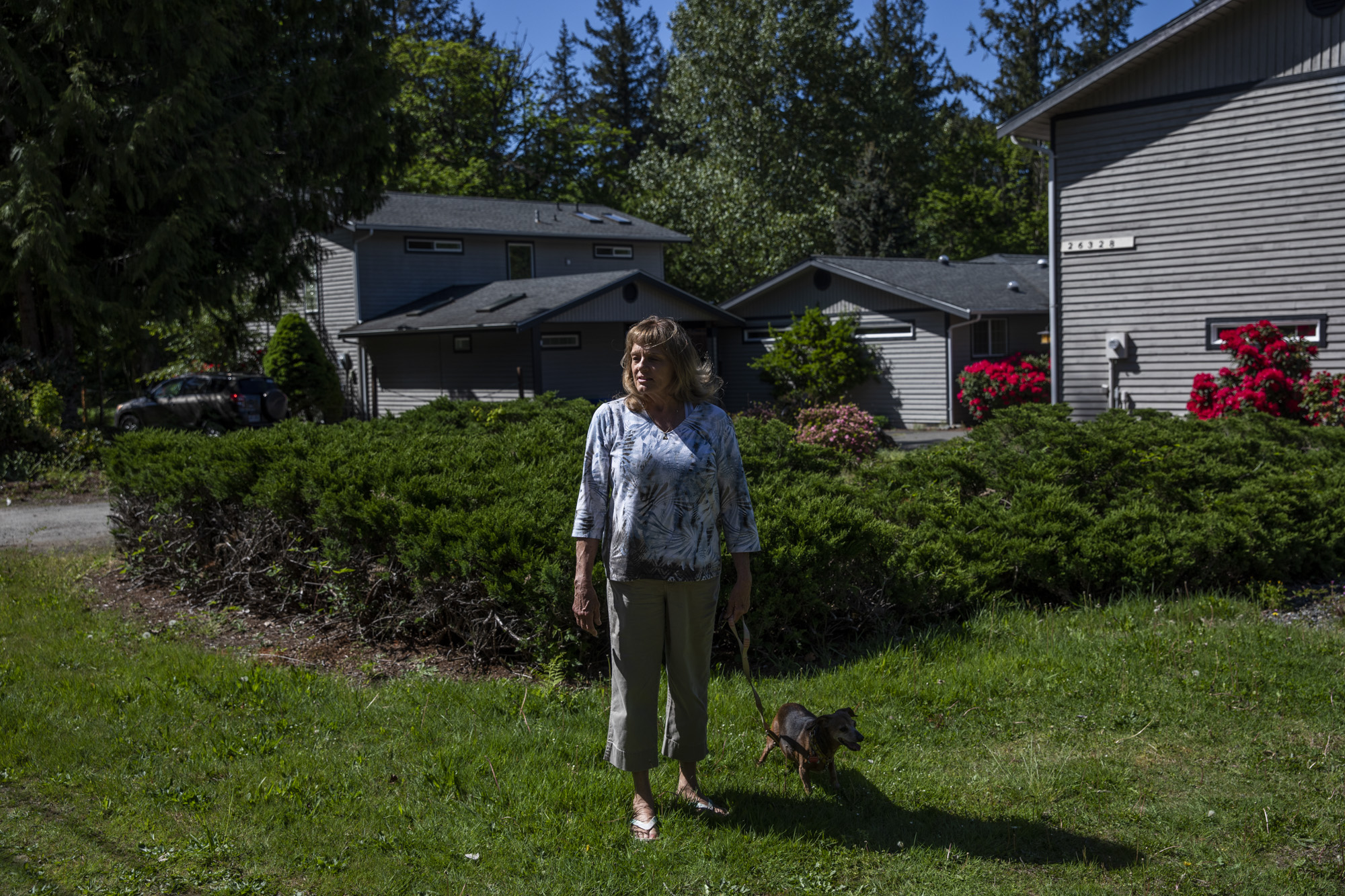 Carol Porter outside of her former home in Issaquah that she lived in for 25 years, May 17, 2021. Porter lost her home when she filed for bankruptcy in 2015 because the Washington law meant to prevent this from happening had not kept up with rising home prices. A new law aims to keep people in their homes if they file for bankruptcy, raising the protected amount to better match King County’s median home price. (Dorothy Edwards/Crosscut)

When Carol Porter filed for bankruptcy in 2015, she didn’t expect she would lose her Issaquah home in the process.

That’s because, for more than a century, Washington law has contained language to protect people’s homes from being sold to pay off their debts.

But the law hasn’t kept up with the state’s rising home prices. As a result, only $125,000 of the equity of Porter’s home was off-limits from her creditors — an amount far shy of what the property was worth.

After Porter’s home was sold as part of her bankruptcy case, she ended up moving out of King County and resettling in Walla Walla, where she now rents an apartment.

It’s a situation state lawmakers don’t want others to have to go through — especially as more people are expected to file for bankruptcy as a result of the pandemic.

A new law aims to keep people from losing their homes when they file for bankruptcy.  Senate Bill 5408, which Gov. Jay Inslee signed into law last week, increases the state’s homestead exemption, so that it will no longer protect only $125,000 of a person’s home value. Instead, the new law will protect a much larger amount — up to the county’s median sale price, based on homes sold the prior year.

Lawmakers took several other actions this year aimed at keeping people in their homes. Those included putting more money toward rental assistance; passing laws restricting landlords from evicting tenants without cause; and requiring landlords to let tenants repay back rent using long-term payment plans, rather than having the debt due all at once.

Together, lawmakers hope the bills will prevent more people from becoming homeless, particularly after the state’s eviction moratorium expires June 30.

“This year’s budget provides more resources than ever related to housing stability and homelessness response, which I think is definitely relevant during the pandemic,” said state Rep. Nicole Macri, D-Seattle, who frequently works on housing issues.

Porter, now 72, said she was doing fairly well until about 15 years ago, when she lent money to her business partner and never got it back. When the 2008 recession hit, her credit card debt began to climb. That began a snowball effect in which she lost her home, her business and her retirement savings, she said.

“I was devastated — here I was, 70 years old, with all my retirement and everything I worked for my whole life, gone,” Porter said earlier this month.

Had SB 5408 been in effect when Porter filed for bankruptcy, she likely could have kept her home, she said.

Several people shared similar stories in public hearings. One man who lost his job during the pandemic said that if the new law had been in place at the time, he could have avoided draining his retirement savings, which he said was the only way he managed to keep his home.

Others on the verge of bankruptcy said they may now be able to keep their homes because the bill passed.

Attorney Christina Henry said increasing the homestead exemption was a no-cost way for the Legislature to help combat some of the economic effects of COVID-19. Henry serves on the board of the Northwest Consumer Law Center, one of the main groups that advocated for the new law.

“The purpose of the homestead [exemption] is to place a family home beyond the creditor’s reach, when individuals face financial misfortune, so their entire households and families do not suffer from homelessness,” Henry told lawmakers at a public hearing in April.

“... With homeownership being the most important vehicle to build wealth for most Washingtonians, protecting the homestead is vital to supporting a healthy middle class in our state and to support the building of generational wealth among families of color and others.”

Tying the homestead exemption to median home prices ensures lawmakers won’t have to constantly come back and pass a new law when home prices spike.

Porter, the woman who lost her home in Issaquah, said even though lawmakers acted too late to help her, others will be able to stay in their homes because of the change in law.

“I’m glad it passed,” Porter said. “I’m sure lots of people have experienced the same thing.” 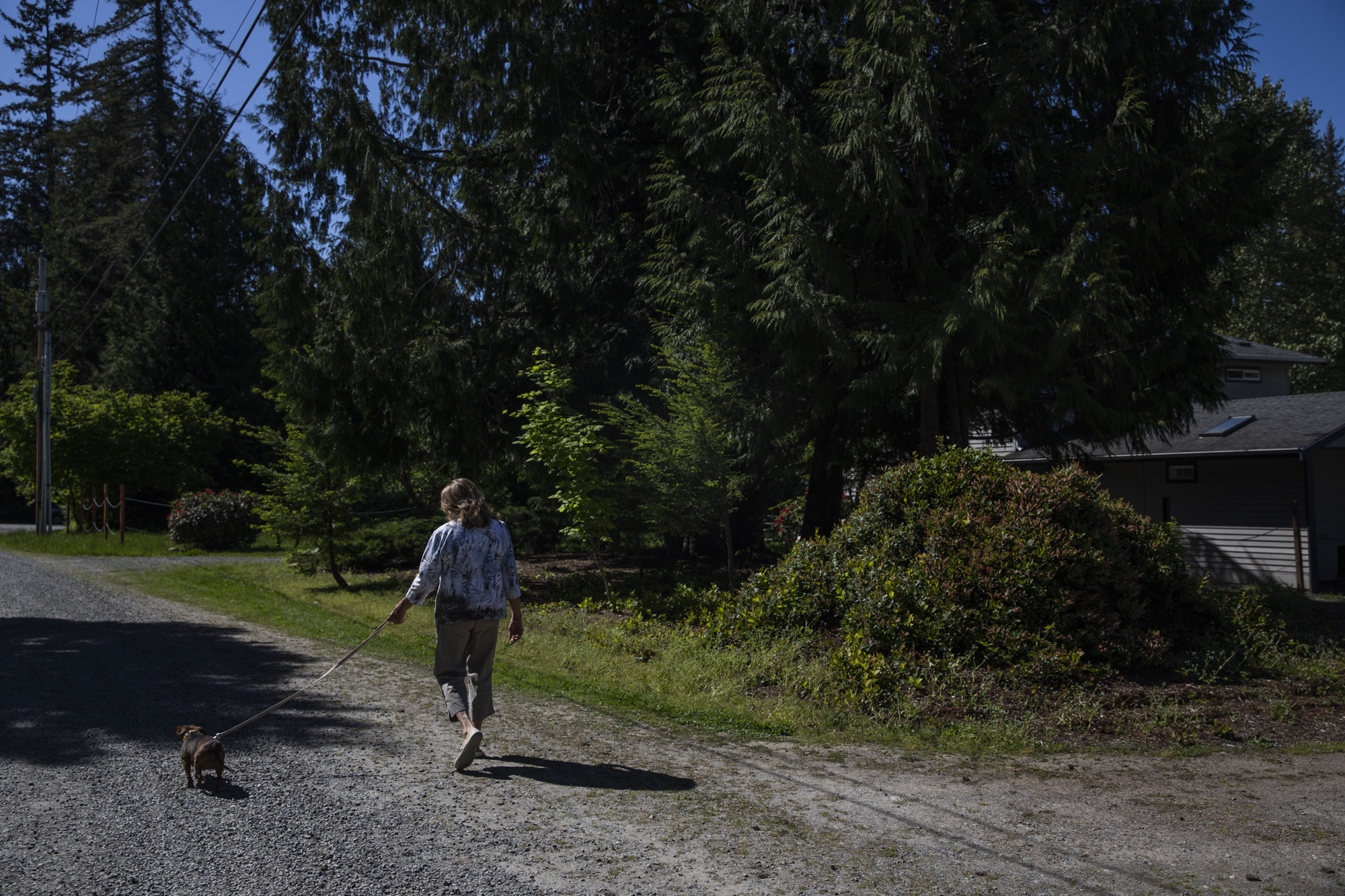 Carol Porter outside of her former home in Issaquah, where she lived for 25 years, May 17, 2021. Porter lost her home when she filed for bankruptcy in 2015 because the Washington law meant to prevent this from happening had not kept up with rising home prices.  (Dorothy Edwards/Crosscut)

Carol Porter outside of her former home in Issaquah, where she lived for 25 years, May 17, 2021. Porter lost her home when she filed for bankruptcy in 2015 because the Washington law meant to prevent this from happening had not kept up with rising home prices.  (Dorothy Edwards/Crosscut)

Macri, the Seattle lawmaker, said she and other legislators have been worried about landlords evicting tenants after the state’s eviction moratorium ends June 30.

Many people have fallen behind on rent during the pandemic, an issue likely to come to a head when landlords can once again tell people to pay or vacate, Macri said.

To soften the impact on struggling renters, the Legislature approved a bill to ban landlords from imposing late fees for rent not paid during the pandemic. Senate Bill 5160 also requires landlords to offer repayment plans to tenants, so they can pay back rent gradually instead of all at once.

Other parts of the bill will provide attorneys for low-income renters facing eviction and expand a mediation program that seeks to resolve issues between landlords and tenants.

Macri said those changes are designed to go hand in hand with a new law that restricts landlords from evicting people without just cause. The new just-cause eviction law, House Bill 1236, bans landlords from evicting people who are renting month to month in most circumstances, unless the landlord can cite one of 16 reasons allowed in the law. Previously, landlords could evict month-to-month renters with 20-days notice, without providing a reason.

Macri said without the change in law, housing advocates were worried that landlords might evict people who were down on their luck during the pandemic, even if those tenants have since brought themselves up to date on rent payments.

“Maybe they were behind on rent a year or six months ago, and they got caught up,” said Macri, the sponsor of HB 1236.

Under the old law, landlords could say, "I don’t want to be bothered and have the risk that could happen again,” Macri said. That has changed now, she said.

Groups representing landlords largely opposed the just-cause eviction measure, saying it would impose too many new restrictions on contracts between renters and landlords.

“It’s overreach into a private contract,” said Cory Brewer, who serves on the board of the Rental Housing Association of Washington, a group that represents landlords. “It takes a mutually agreed contract between two willing parties, two willing and able parties, and it makes it a one-way contract, and that’s not right.”

Under the new law, landlords can still evict people for failing to pay rent or engaging in criminal activity on a property, as well as for other reasons established in the law. For instance, with 90 to 120 days’ notice, a landlord can evict renters in order to sell a property, complete major renovations, or convert a building to condominiums.

In the state’s new two-year budget, state lawmakers approved more than $650 million in rental assistance money. Macri said that sum will go a long way toward keeping people in their homes and helping others who have fallen into homelessness.

To help pay for housing programs, the Legislature approved a $100 increase in fees charged on recorded documents. The fee increase, House Bill 1277, is expected to raise about $300 million over the next two years.

Much of that money will go toward permanent supportive housing and rental vouchers for chronically homeless people. Another portion of the money will go toward preventing evictions among people in danger of losing their housing, with an emphasis on helping people of color who experience homelessness at disproportionate rates.

A small segment of the money from the increased document recording fee will go toward helping landlords, many of whom have lost income during the pandemic, due to tenants unable to pay rent.

“This gives the pathway for both tenants and landlords to address the financial problems they had in the pandemic,” Macri said.