Where Seattle is on police reforms, one year after protests 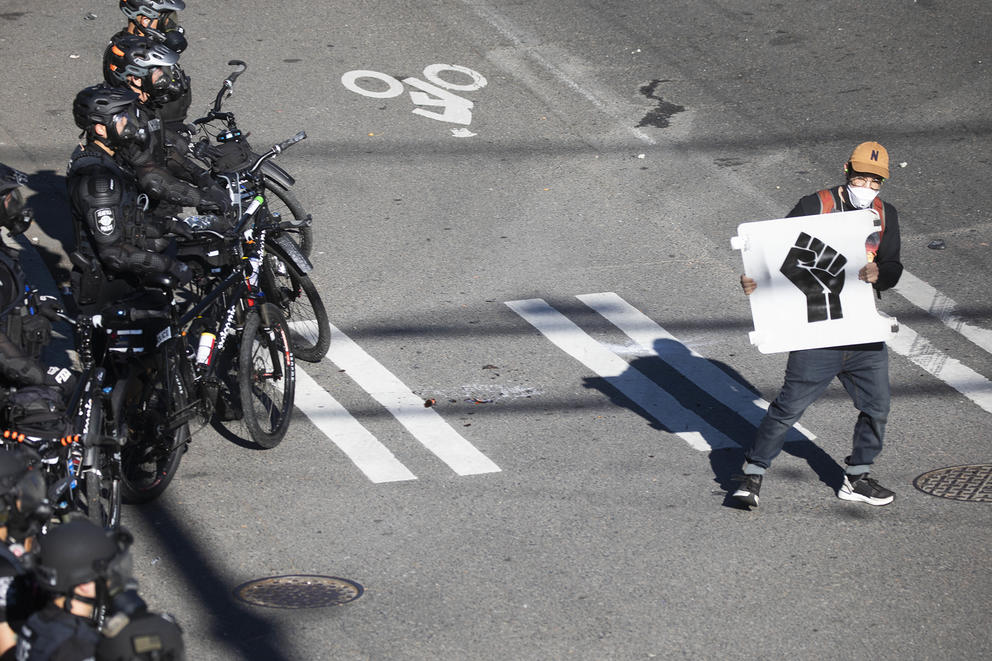 The city’s timing couldn’t have been worse. Just as the protests against police violence were cresting last summer, lawyers and elected officials in Seattle City Hall argued to a judge that most federal oversight of the city’s police department should be lifted.

The request was the culmination of nearly a decade under the eye of the federal court. But to the protesters on the streets, it looked like the city was attempting to shed police accountability at a time when thousands of people were demanding more.

The backlash was so intense that the city pulled its request, and federal involvement in Seattle policing continues today.

But a year since George Floyd was murdered by police in Minneapolis, feelings toward the ongoing consent decree — the bureaucratic term for the police oversight agreement between Seattle and the federal government — are mixed.

At a time of tremendous grassroots organizing for change, the consent decree is heavy from the top down. The decree, a preferred tool of former President Barack Obama and possibly President Joe Biden, has a singular goal: to ensure that local policing is constitutional. But it doesn’t go deep enough to meet the demands of people advocating systemic change.

Activists demand a reshaping of the very definition of public safety. The result is a City Hall struggling to balance pressure from protesters, their own recognition of the need for change and the obligations they face under the still unfulfilled court agreement.

Some continue to value the outside oversight from the courts as a baseline standard for law enforcement. The Rev. Harriett Walden, who founded Mothers for Police Accountability and was a former co-chair of the Community Police Commission, said the Seattle Police Department’s response to the protests was proof of that need.

“It still has value,” Walden said. “The city has to come back into compliance.”

Meanwhile, others have come to view the consent decree as a crutch for a system that should be allowed to fall and a barrier to systemic change.

“I do think it is an obstacle to building and strengthening community-based and community-led responses to harm and prevention and intervention,” said Nikkita Oliver, one of the most prominent voices in last summer’s protests and a candidate for Seattle City Council. “Because it does, in some ways, make it challenging to do the work of divesting from a failed system and investing in alternatives we know can work better.”

The consent decree was signed in 2012, following a federal investigation — led by then-U.S. Attorney Jenny Durkan — into the police department’s use of force. Durkan and the U.S. Department of Justice concluded it was excessive to the point of being unconstitutional, setting into motion the agreement to overhaul the Seattle Police Department.

For community organizations that called on the DOJ to launch the investigation after the shooting death of John T. Williams, a Native American woodcarver. Williams was shot by police in 2010 after crossing a street in front of a police car while carrying an open pocketknife and a piece of cedar.

“It felt very monumental in the sense that it required SPD to make specific changes,” said Oliver.

But the question now is whether the solutions of 2012 are the answers for today. The very notion of “reform” has been called into doubt, including by some, like Council President Lorena González, who worked for years pushing the consent decree forward.

Skeptics of the oversight agreement say the paradigm has shifted and so, too, must the solutions.

“In 2021, we have so much more information, and with this information we need to make different choices,” said Sean Goode, executive director of Choose 180, a criminal justice diversion program for young people. “If we make the same choices we made in 2012 with the information that we have in 2021, what we're really saying is that nothing has changed over that period of time. And we know that that's not the case.”

Angélica Cházaro, a University of Washington law professor who is active with the group Decriminalize Seattle, said the time for the consent decree model, which requires more investment into police departments — for training, technology, staff — has passed.

“I think the consent decree champions are still functioning on this sort of outdated model of we need to keep pouring resources into SPD to ensure that their use of force is consistent with the Constitution,” she said, “whereas the movement to divest from policing and invest in community has come to a different conclusion about how to meet that end.”

But for others looking for change in policing, the consent decree remains an important tool. The fact that the department remains out of compliance with even that baseline requirement means the decree should stick around.

“I personally think all of the rhetoric around it being old or outdated ignores the fact that the city hasn’t met that low threshold,” she added.

It’s unclear how much the formal agreement may clash with the goals of the activists; the question of whether the police can be “defunded” and still remain in compliance with the agreement has not been formally tested in court.

But there have already been some early signs of friction. U.S. District Judge James Robart, who oversees the consent decree, reminded the city of its obligations under the consent decree as it considered the police department’s staffing and budget size. He warned the council earlier this year against charging “off in a direction without knowing what the consequences are and having in place plans to replace essential services currently being provided by the police. If you do that, then you start to violate provisions in the court’s consent decree.”

At the same time, the monitor tasked with evaluating the city’s progress, Antonio Oftelie, has asked the city several pointed questions about how its ambitions do or do not get in the way of creating a constitutional police force.

The message has apparently been received in City Hall on several occasions. The city council tabled conversations around deeper cuts to the police department earlier this year in order to first consult with attorneys and an independent monitor. Last summer, Mayor Jenny Durkan said that the city must consult the court when considering changes to how police manage protests.

Isaac Joy of King County Equity Now said he still believes the consent decree is “definitely a useful tool, albeit insufficient,” as an official acknowledgment of problems in policing.

To the extent that the agreement is slowing down activists’ work on policing, he said, it’s not the fault of the consent decree itself so much as the elected officials who employ  it to go more slowly.

“Folks might try to use the decree as a shield, but that doesn’t speak so much to the decree as it does the lack of conviction and principle on the part of some of the council,” Joy said. “I don’t know if the decree didn’t exist they wouldn’t have found a different excuse.”

The city has so far not refiled its request to the judge to end parts of the consent decree, nor has it offered a plan for bringing police accountability structures up to the judge’s liking. Durkan’s departure from office in seven months all but guarantees the consent decree will continue to exist well into 2022, possibly later.

Meanwhile, the city is still struggling to figure out various processes for doling out tens of millions of dollars for community-based alternatives. This is unfolding as hundreds of police officers leave the department of their own accord.

Reflecting on the protesters’ anger last summer when the city first requested the consent decree be rolled back, Oliver said it showed a certain amount of fear of the unknown. “I think there was definitely a bit of fear, because we've had those sort of bumper guards for a number of years,” Oliver said. But now there exists the real possibility of making a different sort of change.

“I think it's important that the work be able to evolve as the context continues to shift,” said Oliver, “and gets closer to actually addressing the root causes and having solutions that get to that.”