That voting-rights bill Congress rejected? Most of it is WA law

With mail-in voting and same-day voter registration “we really are ahead of the curve,” one state lawmaker says. 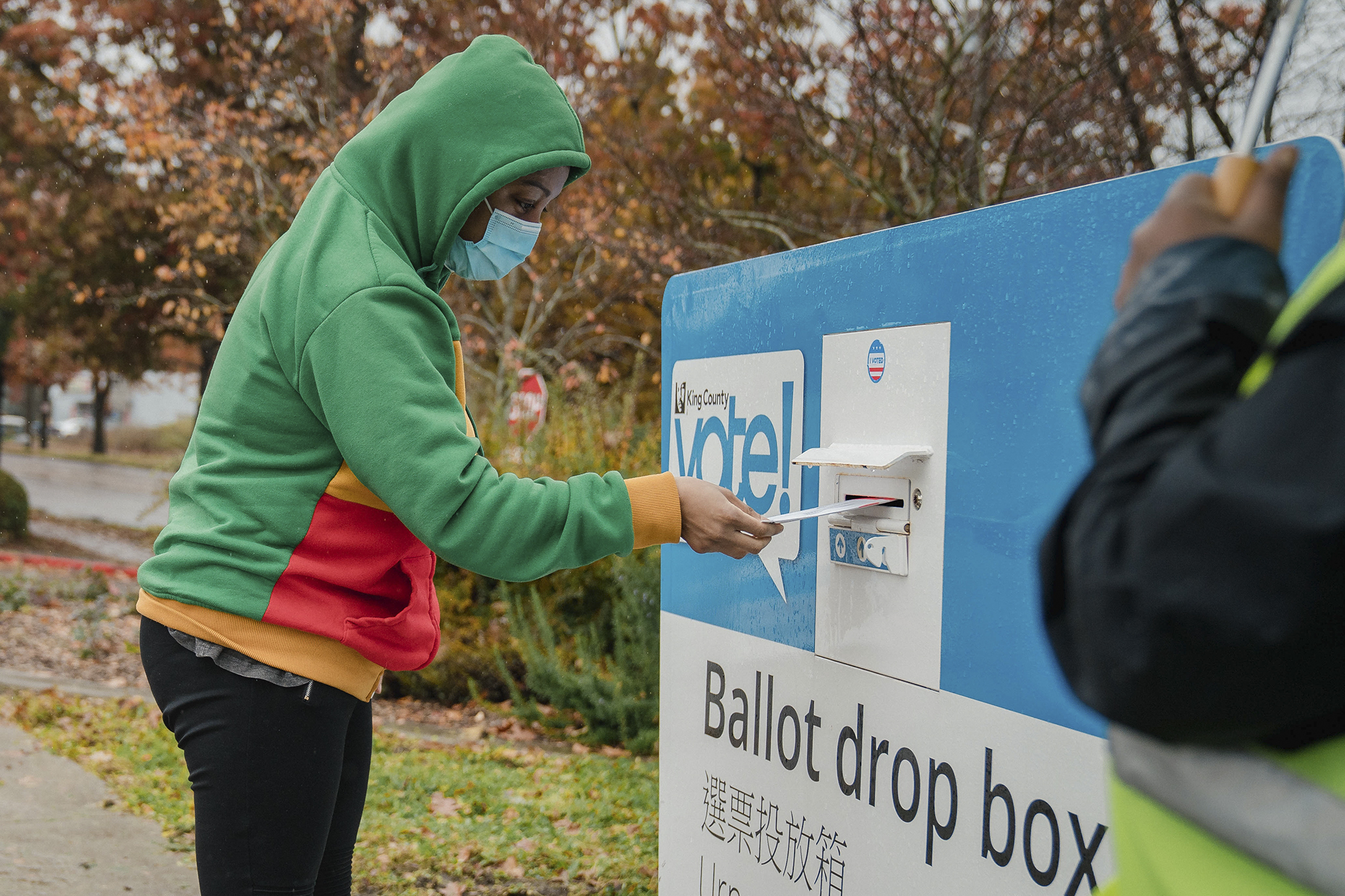 Now Washington state is being held up as an example of how to do elections right.

Many key provisions of the federal For the People Act are already law in Washington state, including the widespread use of mail-in voting, easily traceable paper ballots and same-day voter registration.

“Almost everything that’s in the bill we are already doing or have already enacted,” said Secretary of State Kim Wyman, a Republican who serves as the state’s top elections official.

To be sure, expanded ballot access in Washington won’t help voters in Georgia and Florida, two states that recently enacted laws making it harder to vote by mail and limiting access to ballot drop boxes, among other changes. The U.S. Department of Justice announced Friday that it is suing Georgia over its new law, alleging it is an attempt to suppress Black people’s votes.

But Washingtonians won’t have to wait on Congress before taking advantage of some of the election reforms contained in the failed federal bill.

Here are some of the main pieces of the federal voting rights bill that are already law in Washington state.

Three years ago, Washington state adopted new laws allowing eligible voters to register to vote as late as Election Day, as well as letting 16- and 17-year-olds pre-register to vote. Both reforms would be required under the federal bill that failed to advance last week.

Washington state also automatically registers eligible people to vote when they apply for an enhanced driver’s license or ID card, unless they opt out. This type of automatic voter registration — known in Washington as the motor voter law — is something the federal bill would require other states to implement more broadly.

State Rep. Mia Gregerson, D-SeaTac, said passing those bills in Washington state was about eliminating barriers to voting, especially for people of color, young people and others who feel shut out of the process. Gregerson is the former chair of the state House committee that considers elections legislation.

Compared to what is outlined in the federal bill, Gregerson said this week, “I think we really are ahead of the curve.”

On top of same-day and automatic voter registration, Washington state allows people to register to vote online, as well as to submit updates to their registration online. That, too, is a key part of the federal legislation.

Voting by people convicted of felonies

The federal bill that stalled last week would require all states to let people with felony convictions vote after they are released from prison. Right now, many states ban people convicted of felonies from voting even after their release, with some states suspending those people’s voting rights indefinitely.

Earlier this year, Washington state changed its law to restore people’s voting rights as soon as they leave prison, instead of banning them from voting even when they are on probation. The new changes, which will take effect in 2022, mirror what would be required by the federal voting rights bill.

The federal bill would require states to offer universal mail-in voting, prohibiting any state or local restrictions on a person’s ability to cast a vote by mail.

Washington state has been voting almost entirely by mail for more than a decade, so for Washington voters, this would not be a change.

Additionally, the bill before Congress would require pre-paid postage on return envelopes for mail-in ballots, so voters don’t have to scrounge for stamps to vote. In 2019, Washington legislators decided to provide pre-paid ballot postage to every voter, passing a law that stated in part: “The legislature finds that voting should be free for all citizens.”

Washington state’s early voting period also exceeds what is outlined in the federal bill. Across Washington, election officials mail ballots 18 days before Election Day; the federal For the People Act says the window for early voting should last at least 15 days.

One of the accountability measures built into Washington state’s system of voting is a ballot-tracking system. Each ballot envelope is assigned a number, which allows voters to go online and check the status of their ballot as it goes through the process of being counted. Election officials say this builds confidence in the system and helps voters identify and correct any problems that may arise -- such as a voter not receiving a ballot that has been mailed out, or a ballot that has been challenged because of a mismatched or missing signature.

The federal voting bill would require all states to implement a tracking system similar to Washington’s.

Voter-verified paper ballots are a hallmark of secure voting systems, experts say, because they can’t be easily hacked and altered.

Washington already has paper ballots, but some states that use electronic voting machines do not. Both HR 1, the House version of the federal voting bill, and SR 1, the Senate version, would require all states to use paper ballots, following Washington’s lead.
Having paper ballots that can be recounted and reviewed is an important part of ensuring elections can be audited and ballots can be recounted, confirming the results of close races.

Washington state law already bans the use of multiple “shell” political action committees to conceal the true source of a campaign donation or campaign ad. Similarly, the For the People Act would prohibit money transfers between organizations that can be used to conceal a donor’s identity. Policymakers say this emerged as a bigger problem after the Supreme Court’s 2010 Citizens United decision, which opened the door to greater amounts of corporate money in politics.

The For the People Act would require all states to appoint an independent redistricting commission that would be in charge of redrawing the boundaries of legislative and congressional districts, a process that happens every 10 years. These independent commissions would have to include representatives from multiple parties, so that one party doesn’t have complete control over how the state’s political lines get drawn.

This is a different system than employed in most states, where state legislatures control the redistricting process and can thereby draw lines that benefit the party that controls the statehouse.

And, outside of the city Seattle, Washington state doesn’t have a public financing system for campaigns, like the small-donor matching program that would be created under the For the People Act.

What’s next for federal voting-rights bill

Senate Republicans used the filibuster to block the For the People Act from being debated on the Senate floor. That’s prompting renewed conversations about whether to eliminate or substantially reform the filibuster, which requires the consent of a 60-vote supermajority of senators for most legislation to advance.

Democratic U.S. Sens. Patty Murray and Maria Cantwell, both from Washington state, say they support substantial changes to the filibuster process to help get legislation like the For the People Act through Congress.

“What we need to be doing here is to show states that an 83% voter turnout in the state of Washington is a great victory,” Cantwell said while speaking in support of the federal bill last week, citing turnout in last fall’s general election. “A high turnout is a great participatory system, and that's what we should be striving for with these reforms that are about security and about our constitutional rights.”

Yet the wide-ranging federal bill has its critics. Wyman, Washington’s GOP secretary of state, said she has concerns about technical aspects of the bill, including whether some of its more detailed provisions would actually end up rewinding or rolling back some of the more advanced reforms enacted in Washington state.

Ensuring that elections officials get ample funding to carry out any changes prescribed at the federal level is also vital, Wyman said.

“You're going to make some pretty sweeping changes that, you know, we had the good fortune to take years to implement, like moving to vote by mail, automatic registration,” Wyman said of the federal proposal. “... But all that costs money.”