What it means for Juneteenth to be an official holiday

The U.S. and Washington state are now formally celebrating June 19 to mark the end of slavery. 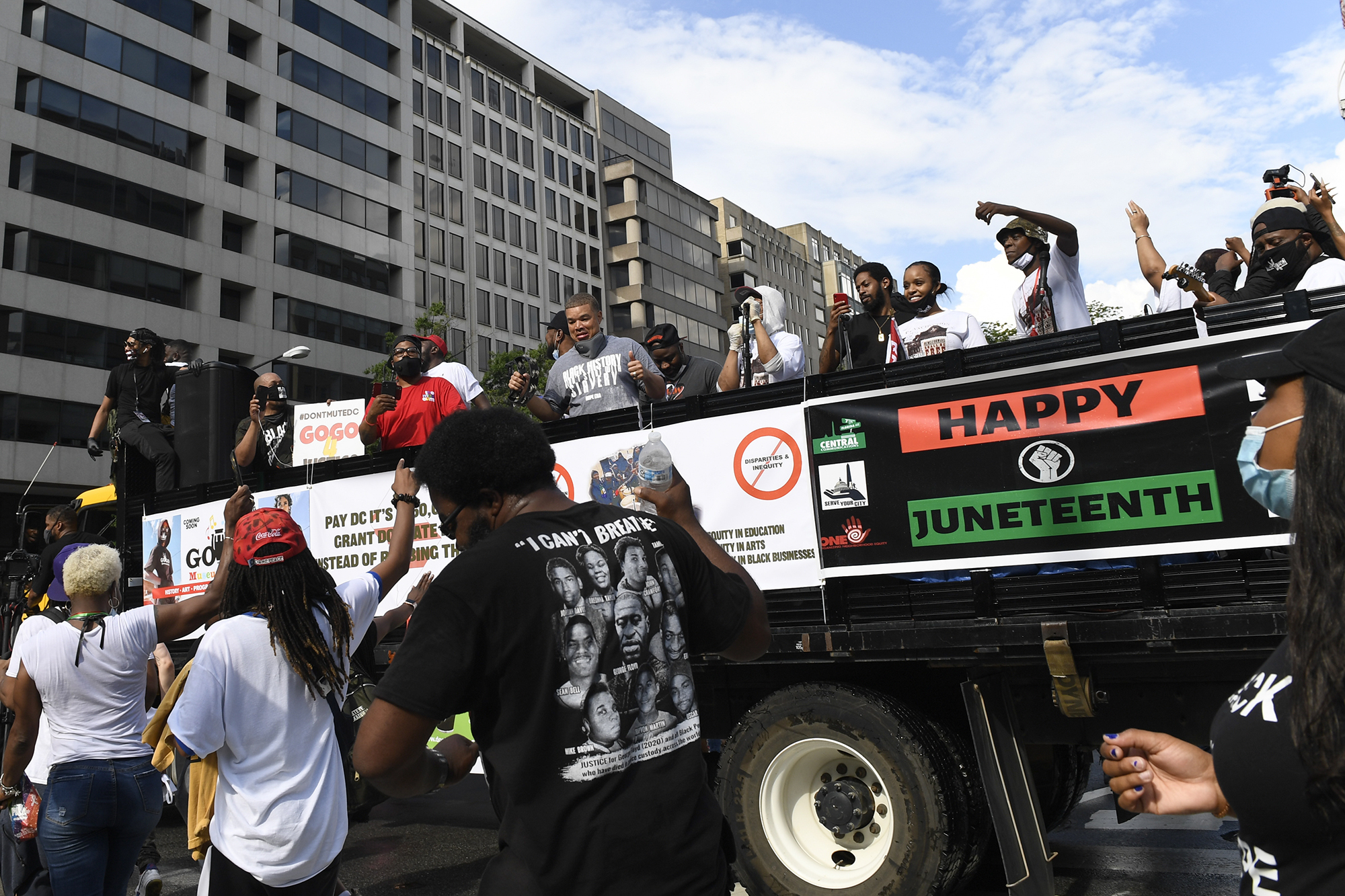 Musicians on a flatbed truck play Go-go music as people head down a street in Washington, D.C., on June 19, 2020, to mark Juneteenth. Juneteenth celebrates the day in 1865 that enslaved Black people in Galveston, Texas, learned they had been freed from bondage, more than two years after the Emancipation Proclamation. (Susan Walsh/AP)

When Washington state Rep. Melanie Morgan was growing up, she didn’t learn about Juneteenth in school.

In the history books that she and many others were assigned, “Juneteenth may have been a one-line thing,” the Democrat from Parkland said this week.

Now, Morgan hopes students and adults alike will get a more thorough education about Juneteenth, or June 19, the day frequently celebrated to mark the end of slavery in the United States.

This week, Congress approved a measure to make Juneteenth a federal holiday, a measure President Joe Biden signed into law Thursday. That makes Juneteenth the first new legal holiday to be established by the federal government in nearly four decades.

In a public hearing in January, Morgan said making Juneteenth a legal holiday sends a clear message that “Black people deserve to have their histories remembered.”

Speaking on the phone this week, she elaborated. “It acknowledges us as human beings,” said Morgan, who is Black. “That’s the acknowledgement — that you can’t just throw us aside.”

“It’s saying, ‘You must celebrate us,’ which puts us in a more human role,” said Morgan, who has pushed to make Juneteenth a state holiday for multiple years.

Juneteenth is a celebration of June 19, 1865, when federal troops came to Texas and told enslaved Black people there that they were free.

Enslaved people in other states had been freed earlier, including by the 1863 adoption of the Emancipation Proclamation and the April 1865 surrender of the Confederate army in the Civil War. But many enslaved people in Texas spent additional months in bondage, unaware of their emancipation, according to an article by historian Quintard Taylor, a professor emeritus of history at the University of Washington.

Taylor, who founded BlackPast.org, wrote that Texas — which was somewhat isolated from Union and Confederate forces during the Civil War — “became a place of refuge for slaveholders seeking to insure that their ‘property’ would not hear of freedom.”

But on June 19, 1865, all of that changed, Taylor wrote. That was when federal troops, having just arrived in Galveston, read a proclamation informing local enslaved people of their emancipation. The date of that proclamation is what is commemorated on Juneteenth, which has become a celebration of the end of chattel slavery in the United States. 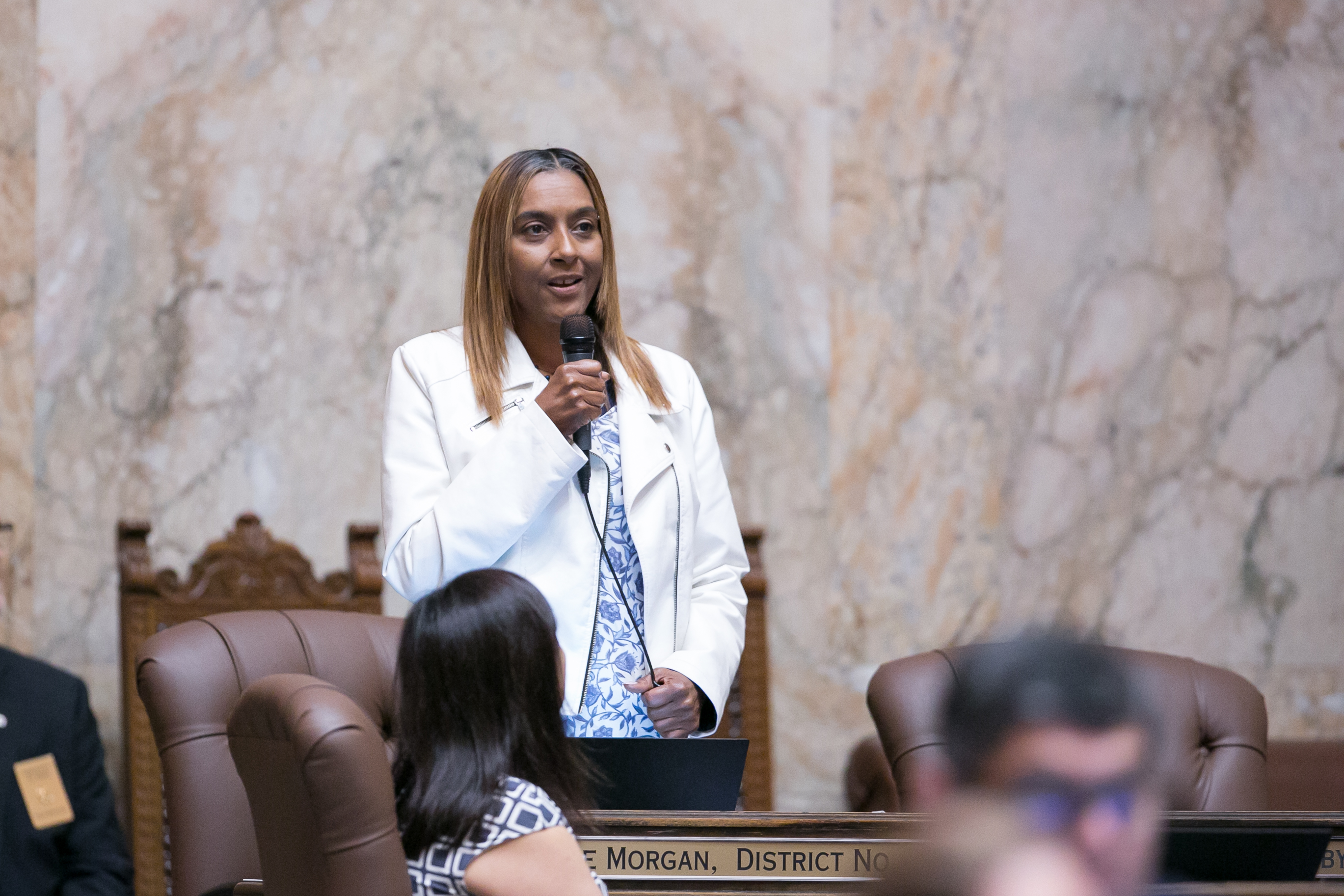 RaShelle Davis, a senior policy adviser to Inslee, told a panel of state lawmakers earlier this year that making Juneteenth an official holiday was very personal for her.

“I am a descendant of enslaved people, and Juneteenth is my independence day — and it is  the independence day of all Black Americans,” Davis testified during a public hearing. “Our freedom was denied and then later delayed, and we owe it to my ancestors to never forget.”

“Making Juneteenth a state holiday and a national holiday allows us all to begin the journey of healing, reconciliation and transforming this society into one that is truly anti-racist,” Johnson said.

Johnson said she recently reread Frederick Douglass’ 1852 speech about the Fourth of July, in which he spoke of how people who were enslaved did not share in the freedom brought by the American Revolution. For her, it underscored the importance of celebrating Juneteenth in addition to the Fourth of July.

“Basically, what he was saying to people who did not look like him was, ‘Your ancestors died in a war to fight for your freedom that did not extend to me and my forefathers,’” Johnson said.

“So, for me, the question is, ‘Is not the blood that ancestors of Black Americans shed just as valuable?’”

“If we can make Fourth of July a national holiday, when that independence did not extend to people who looked like Frederick Douglass, how can we not make a national holiday of when we abolished chattel slavery in the United States?” asked Johnson, who has a doctoral degree in urban services.

The move to honor Juneteenth didn’t receive much opposition this year in the Washington state Legislature, but there were a few critics.

State Rep. Robert Sutherland, R-Granite Falls, was one of 10 Republican lawmakers who voted no on the bill. During a House floor speech, Sutherland talked about how America wasn’t alone in having allowed the enslavement of human beings — “slavery has been with this planet for eons of time, and that’s just a shame” — but his main objection to the Juneteenth bill was cost.

While most state workers will get the day off, not all agencies are able to shut down for the day, meaning the state will have to hire replacement workers to keep state prisons, ferries, health care facilities and other round-the-clock operations running. These replacement workers are expected to cost the state about $7.5 million every two years, according to a nonpartisan fiscal analysis.

“Seven million dollars, and what does that money go toward? Government employees getting a paid vacation day off,” Sutherland said. “This doesn't help the communities of color.”

Morgan, the bill’s sponsor, said she designed the bill to not give workers a paid day off until June 2022, partly to ensure that the measure wouldn’t take away any money from this year’s response to the COVID-19 crisis.

She has noted that the bill’s $7.5 million price tag is only a small part of a two-year state budget that totals $59 billion.

“It’s not even close to the real cost of racial injustice," Morgan told her colleagues in January.

Lyn Idahosa, executive director of the Federal Way Black Collective, said she thinks there is a danger that the Juneteenth holiday might become a day where corporate employees and state workers — most of whom are white — get the day off, while many Black people will continue to work. She said that results from the overrepresentation of Black people and people of color in service jobs, as well as the role Black people play in running Juneteenth events and educating others about the significance of the holiday.

To ensure the Juneteenth holiday amounts to more than symbolism, Idahosa said, celebrations should go beyond spotlighting Black people’s trauma by focusing on ways to directly help them — such as by patronizing Black businesses, or discussing concrete steps that can be taken to improve Black people’s lives.

This week, Idahosa and members of the Federal Way Black Collective have held daily events at Federal Way City Hall to talk about issues that affect Black people and how those are being addressed, with an eye toward effectively implementing new laws passed by the Legislature. Those conversations — on topics ranging from early learning to gun violence to mental health — are being broadcast on Facebook Live and will culminate in an in-person event on Saturday at the Federal Way Farmers Market.

“We’re having this weeklong celebration, but it is dedicated to conversations about implementation,” Idahosa said. “Because we’re not done.”