Now, legislators think they have a fix to bring the public-option law they passed two years ago to every county. 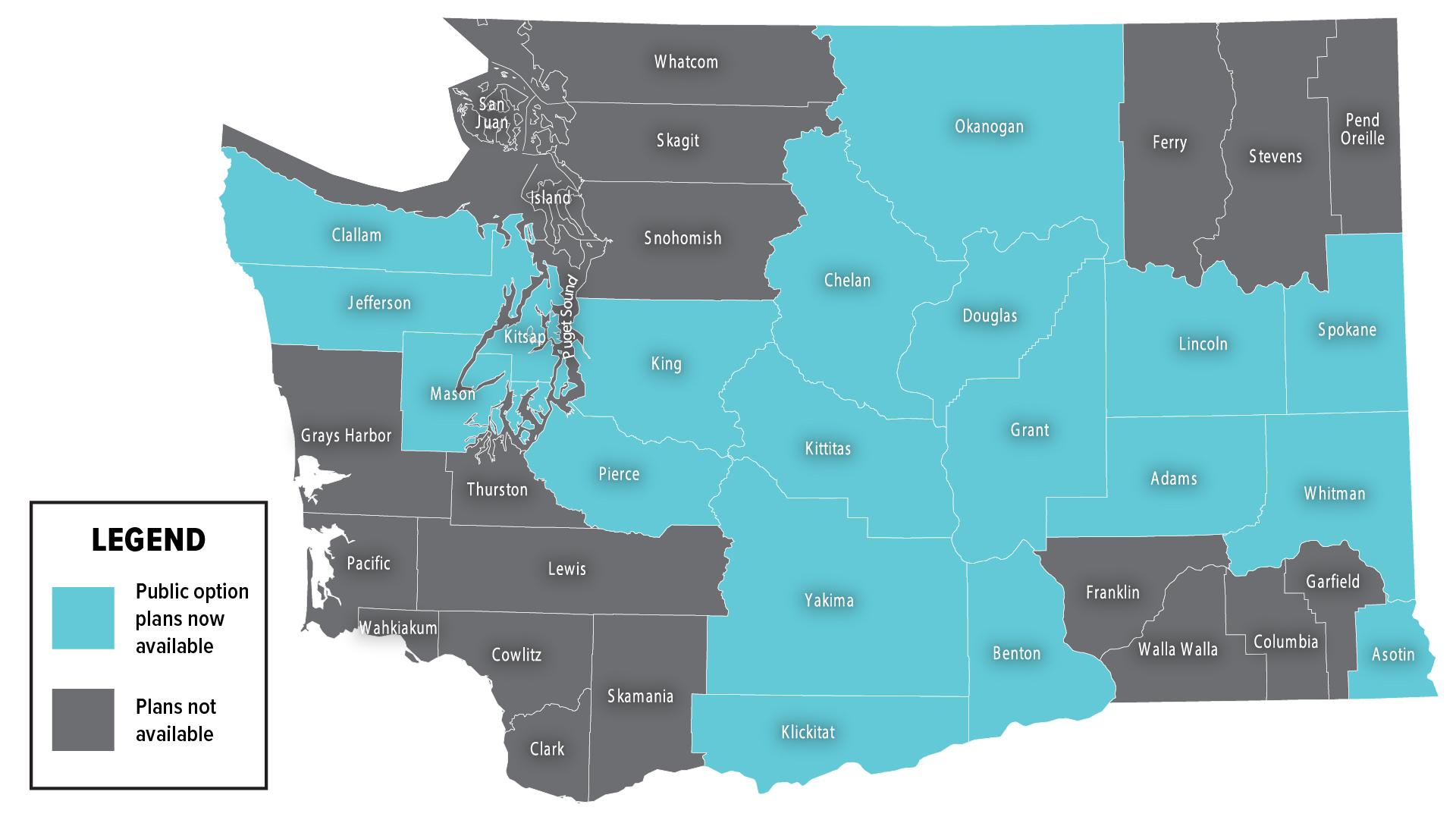 Two years ago, Washington state lawmakers passed a public-option health care bill, with the goal of making it easier and cheaper for Washington residents to buy health insurance.

Yet in about half the state’s counties, if you try to buy a public-option plan run by the state government, you'll be out of luck.

The spotty availability of the new public-option plans is one of several hiccups that arose during the rollout of Washington’s new, government-procured health care program.

Now, Washington legislators think they have found a solution to bring the public-option plans to all of the state’s counties by 2023.

Washington was the first state to approve this kind of public-option program, which doesn’t involve the state setting up and running its own insurance plan or providing universal health care, like Medicaid for All.

Instead, the state contracts with private insurers to offer the plans, while setting certain rules and cost limits. The public-option plans are then sold alongside other insurance plans on the state’s public insurance marketplace.

Except this year, people could buy the plans in only 19 of the state’s 39 counties.  As of May, fewer than 2,000 Washingtonians were enrolled.

State Rep. Eileen Cody, who chairs the House Health Care and Wellness Committee, said the main reason so many counties didn't have public-option plans available is because some hospitals refused to participate.

“That’s where the problem has been, the hospitals,” said Cody, D-West Seattle.

A bill the Legislature approved in April aims to address that issue. Senate Bill 5377 says that, in counties where public- option plans don’t yet exist, hospitals can’t simply refuse to take part in one.

Instead, the hospitals will have to contract with at least one public-option plan, if they are asked by an insurer to be part of a public-option network.

Those requirements take effect in 2023.

Right now, they aren’t necessarily the cheapest health insurance options in every county where they’re offered, according to the Washington Health Benefit Exchange, the state-run insurance marketplace.

Cody said that’s “hard to understand,” since the backbone of the public-option plans is the state stepping in to limit reimbursement rates, a key driver of health care costs.

State Sen. David Frockt, D-Seattle, said Washington’s public-option system is a work in progress, partly because when lawmakers approved it, they were experimenting with something new.

“This is the first time we have tried to do this in the country,” said Frockt, who sponsored the original public-option bill in 2019, along with this year’s SB 5377. “We really didn’t know how it was going to play out.”

Plenty of people are watching Washington’s system to see how things go. Legislators in Nevada and Colorado recently passed public-option plans that are not yet up and running, while U.S. Sen. Patty Murray, D-Washington, is developing new public-option legislation at the federal level.

How public option works in WA

Instead, the state’s system is more of a public-private partnership, in which the state contracts with private insurers and requires the plans they offer to meet certain standards.

Washington state also regulates costs. Under state law, insurers offering public-option plans are limited to paying hospitals and providers 160% of what Medicare — public insurance mostly for the elderly — would pay.

But there’s some flexibility. Because the 160% cap on reimbursement rates is calculated across an insurer’s entire network, some doctors and hospitals can be paid more, while others can be paid less.

Cody thinks that wiggle room could be making it harder for insurance companies to keep the costs of public-option plans low.

“It’s an average and not a hard cap, so what happens is everyone tells the plans, ‘Get it from somebody else,’ ” she said, describing how hospitals and providers may not agree to the 160% reimbursement rate.

That “soft cap” on rates is something the Legislature may have to revisit in the future, Cody said, if public-option plans still aren’t offering customers the savings lawmakers had hoped to see.

Hospitals and doctors have never liked the rate -setting part of Washington’s public-option law. saying it threatens their financial model and could even put them out of business.

“The challenging part of the public option for hospitals is that the premise of the bill is that providers and hospitals will be paid less to control costs,” said Chelene Whiteaker, lobbyist for the Washington State Hospital Association.

Because Medicaid — public insurance mostly for low-income families — and Medicare don’t pay enough to cover the costs of patient care, “where the hospitals make up those losses is in commercial health plans,” Whiteaker said.

One of the hospital systems that was the target of the new bill was Providence Health Services, which runs 15 hospitals across Washington state.

A spokesperson for Providence wrote in an email that the nonprofit intends to participate in public-option plans next year, a year before the new participation requirements take effect.

So far, it looks as if six more counties will offer public options next year than did so in 2021, according to the Health Benefit Exchange.

Frockt said he thinks some of that expansion results from hospitals and insurers getting ready for the new mandate taking effect in 2023.

While lawmakers want to see the public-option plans become even cheaper, there are some signs that’s already happening.

“It’s starting to take hold,” said Michael Marchand of the state Health Benefit Exchange. “it just takes a while … for new products to come and get their foothold.”

The state also approved new subsidies this year to the tune of about $50 million a year. That should help make plans more affordable, especially for those who don’t qualify for federal health insurance subsidies. The state subsidies will help reduce premiums not only for the public-option plans, but also for other state-endorsed plans that are sold on the state’s insurance marketplace.

Once more people start buying the public-option plans, that should create competitive pressure, which lawmakers hope will drive insurers to lower their prices across the board, Frockt said.

So far, that competitive pressure hasn’t been there, he said.

Still, the new system has provided other benefits for patients. In addition to creating the public-option plans, the 2019 law created other standardized health plans with lower deductibles, which are designed to be easier to compare and evaluate when shopping for insurance. Lawmakers took additional steps this year to make the state’s insurance marketplace easier to navigate.

Frockt said the next step is to wait and see how the changes to the state’s public-option system play out. He’s optimistic.

“It’s still early,’ he said. “We’re still kind of at the leading edge of this, if we can make this work.”