Harrell, González will likely compete to be next Seattle mayor

In the contest to replace Lorena González on the Seattle City Council, Fremont Brewing founder Sara Nelson and attorney and activist Nikkita Oliver jumped out to a clear lead. 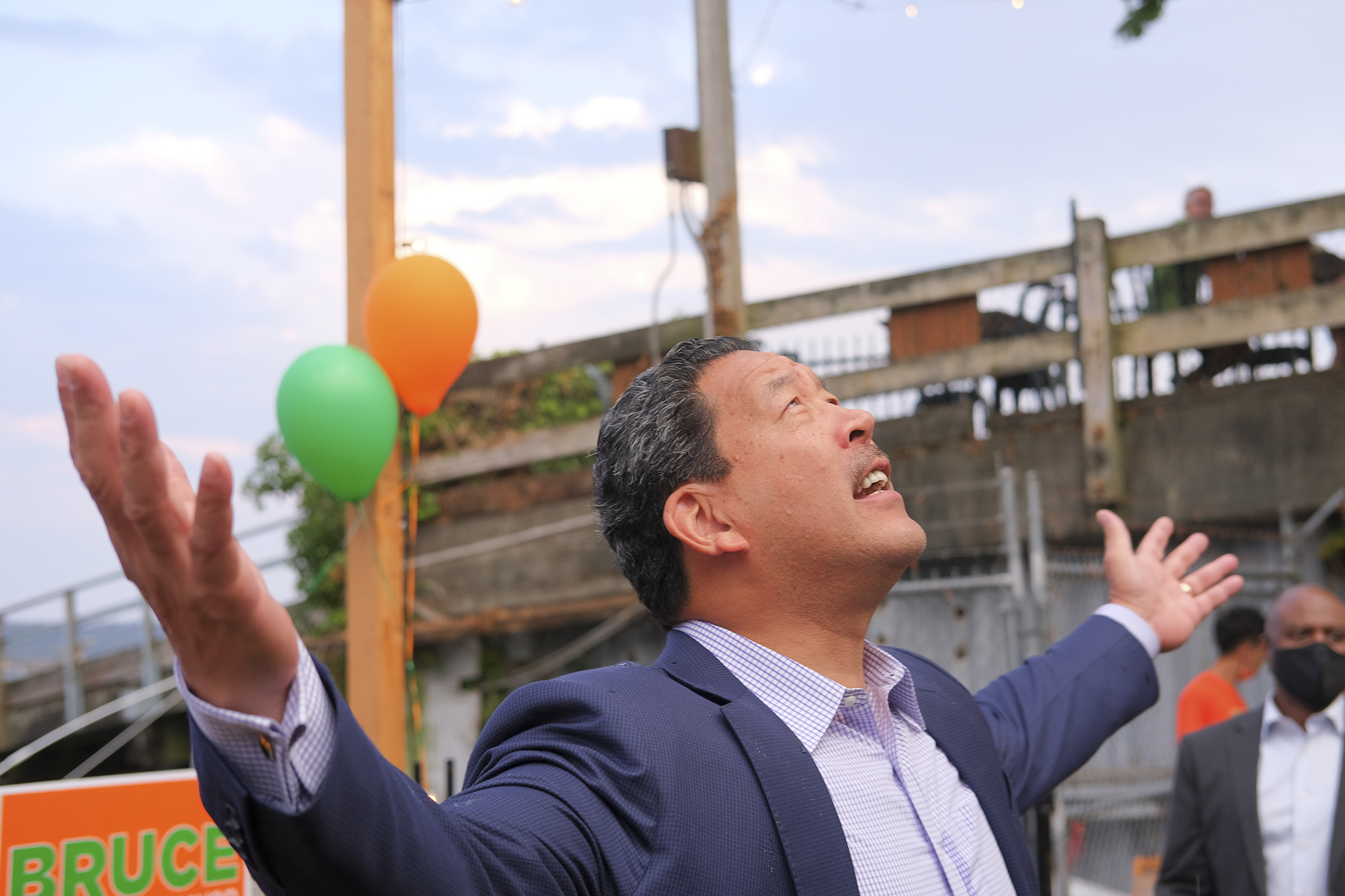 Bruce Harrell looks up to the sky as it begins to rain during his election night party for his mayoral campaign, Aug. 3, 2021 at BluWater Bistro. (Genna Martin for Crosscut)

Bruce Harrell and Lorena González will face off in November to become Seattle’s next mayor — the former president of the Seattle City Council against the person who holds that position today.

At stake: the vision for what Seattle may become as the city grapples with the pandemic’s economic fallout, policing and, of course, housing and homelessness.

RESULTS: See which candidates will move on to the general election here.

“The city is now redefining itself, what it’s going to be,” said Harrell. “And I truly believe that the decisions that will be made next year, in 2022, will define it for years to come. And that's what we're going to focus in on: what the city is going to be.”

Harrell took a clear lead Tuesday night with 38% of the vote to González’s 28%. As late ballots are counted in the coming days, the margin between the two could narrow — a consistent trend in Seattle elections, in which subsequent ballot counts favor the more progressive of two candidates, in this case González.

But regardless of what happens in the coming days, both Harrell and Gonzalez’s margins are almost certainly insurmountable for the next closest candidate, Colleen Echohawk.

González said the results showed that voters “want a mayor who will stand up to big wealthy corporations that have spent millions, millions to try to stop progress, but refuse to pay their fair share when it comes to addressing our most significant issues in this city.”

“We are done biting around the edges. It is time for a mayor who is going to center working people and our issues at City Hall and that is what tonight represents,” González told supporters at an election night party at Jellyfish Brewing Company. 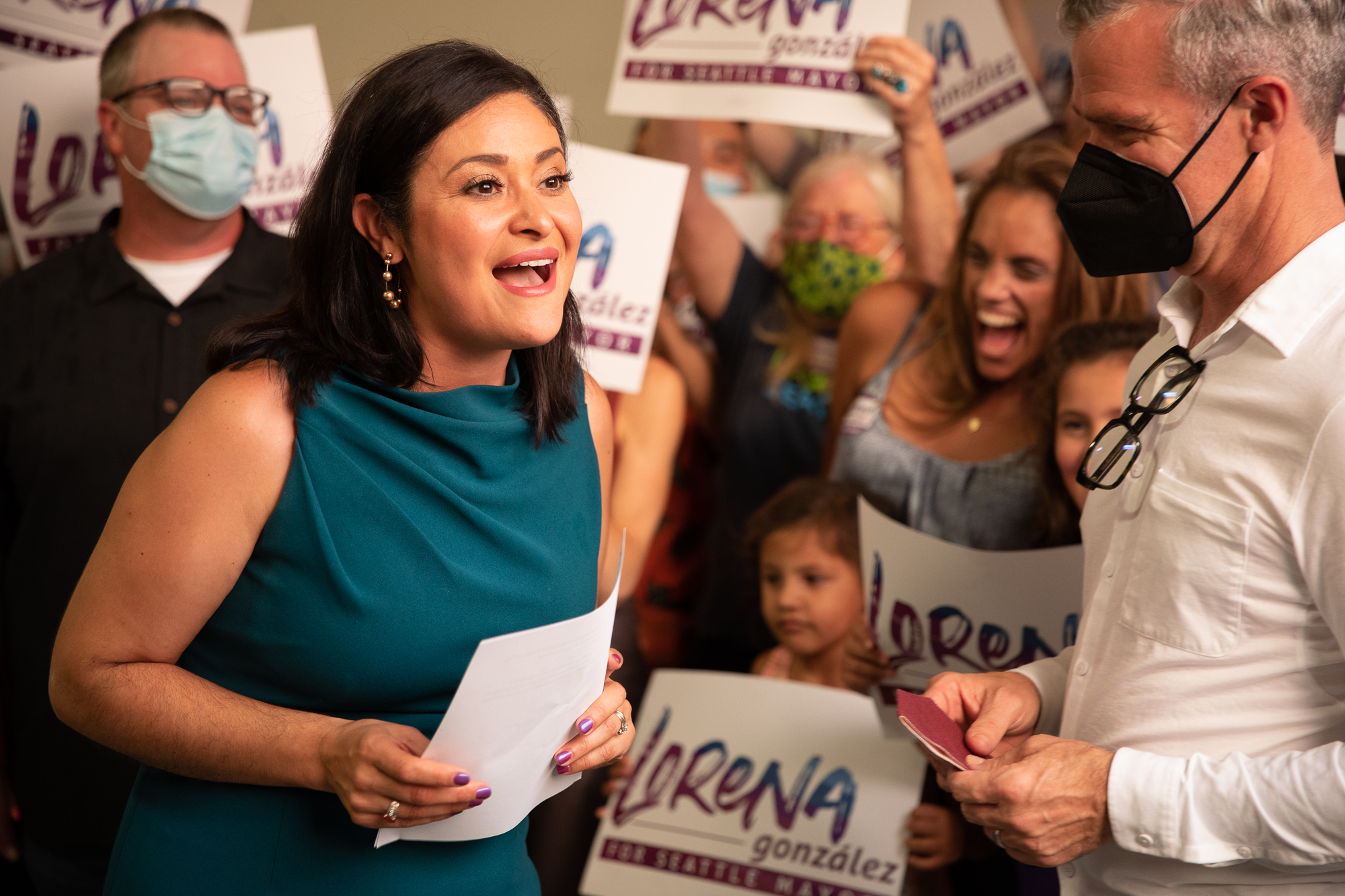 In the contest to replace González on the council, Fremont Brewing founder Sara Nelson and attorney and activist Nikkita Oliver jumped out to a clear lead and will compete for a seat this November.

Speaking by phone after the results dropped, Nelson said her feeling on Tuesday was the complete reverse of what she felt on primary night four years ago, when she ran for a council seat, but placed third in the primary.

“They want change, they want pragmatic progresisve leadership that moves the needle on some of our greatest challenges as we emerge from this pandemic,” Nelson said of Seattleites. “They want diversity of thought on the council; they want someone who is going to put forward implementable policy solutions and not rhetoric.”

Oliver said they are “very excited” about the results and expect that their showing will improve as more votes are counted later in the week.

Even the early results, however, show that Seattle voters “are ready for housing for all, transportation for all, a green new deal, progressive revenue generation and a public health and safety system that works for everyone,” they said.

“That is what our campaign is about,” Oliver said.

In the second race for city council, incumbent Teresa Mosqueda held a comfortable lead, as was expected, and will likely face either Kenneth Wilson or Kate Martin this November.

Meanwhile, the race for Seattle city attorney is shockingly close, a red warning light for three-term incumbent Pete Holmes. Holmes is narrowly in second place behind Ann Davison, who ran for statewide office as a Republican in 2020. Public defender and abolitionist Nicole Thomas-Kennedy is in third place, but only barely behind Holmes. The race will almost certainly be decided in the coming days as more ballots are counted.

Holmes' campaign manager, Christian Sinderman, said they’re feeling optimistic that their “late messaging” will swing votes their direction. “Seattle has a history of close races that get decided by a late ballot, and this is going to be one of them,” he said.

Davison, meanwhile, said she was “touched” by the results. “Seattleites clearly are showing 16 years of one approach is too long,” she said in a statement.

King County Elections had previously estimated a 40% turnout, but spokesperson Halei Watkins said “that was admittedly a little optimistic.” Turnout in 2019’s summer primary was 35%. Watkins said roughly 240,000 ballots were being released in today’s only drop, just after 8 p.m., with many more to come in subsequent days.

For Seattle-based candidates, the months ahead are likely to be a referendum on the direction of the city. As the twin crises of homelessness and housing prices balloon and as the city looks to recover from the pandemic while redefining the role of police in public safety, who takes the reins of City Hall will be pivotal.

With Mayor Jenny Durkan declining to seek a second term — guaranteeing that Seattle would have its third one-term mayor in a row — the field to take her place quickly expanded. For candidates Echohawk, Jessyn Farrell, Andrew Grant Houston and Casey Sixkiller, the timing and execution of their campaigns fell short.

In the months to come, Harrell said he’s going to run a “positive” campaign that’s not about looking in the “rearview mirror.” González, meanwhile, is likely to seize the more progressive mantle of the two, pushing voters to look forward instead of back and preaching transformational change.

While the pandemic and questions of the best road forward on policing will loom large, the dominant campaign issue will almost surely be homelessness.

In the King County elections, there were few surprises. Incumbent County Executive Dow Constantine led with 54% of the vote, a comfortable margin over his most serious challenger in years, state Sen. Joe Nguyen.

On the county council, the incumbent Republicans all did well, although Kathy Lambert is currently below 50% of the vote.

The renewal of the Best Starts for Kids levy — an antipoverty effort led by the county since 2015 — appears on its way to passing with 58% of the vote.