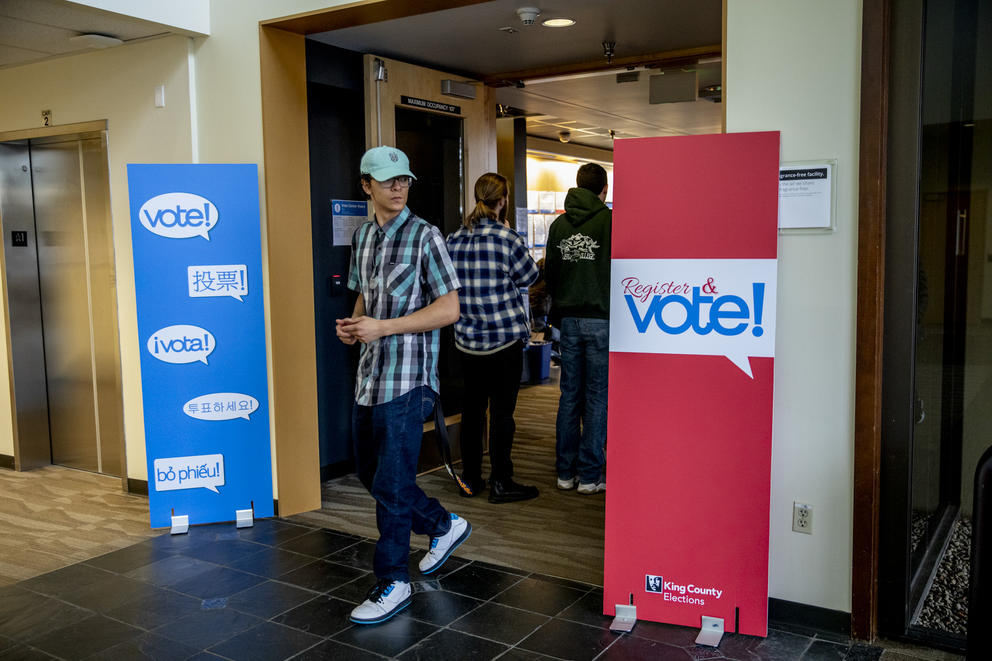 People visit the voting center at the King County Elections headquarters in Renton for Washington state’s primary election on March 10, 2020. Though gloves have always been optional for elections workers, it has become mandatory to prevent COVID-19. (Dorothy Edwards/Crosscut)

A large swath of Seattle voters is still mulling whom they’ll support in this November’s election, but among those who’ve made up their minds, the more moderate candidates hold the edge, according to a new Crosscut/Elway Poll.

In the race for mayor, the clearest advantage belongs to a former president of the Seattle City Council, Bruce Harrell: 42% of likely voters surveyed said they planned to vote for him, compared with 27% for his opponent, the current council president M. Lorena González. At the same time, nearly a quarter said they were undecided.

Homelessness is still voters’ top priority by a wide margin, as has been the case in Seattle for years now, while support for hiring more police officers remains solid.

Incumbent Teresa Mosqueda is the one progressive in four citywide contests who is currently besting her opponent — leading the race for one of two open seats on the Seattle City Council with 33% support, compared with Kenneth Wilson’s 17%. But nearly 40% of voters said they were still undecided, a sign that Mosqueda cannot run on autopilot in the coming weeks

And in the stark race for city attorney between Ann Davison, a former Republican candidate for Washington lieutenant governor, and Nicole Thomas-Kennedy, an abolitionist former public defender, a whopping 45% of voters say they’re still undecided. Of those who have made up their mind, Davison leads with 26% support to Thomas-Kennedy’s 22%.

The leads held by both Nelson and Davison fall within the poll’s five-point margin of error. The survey was conducted last week and includes 400 likely Seattle voters who participated in at least one of the 2017 and 2019 general elections. The poll was conducted using a mix of calls to landlines and cellphones, plus text messages directing people to an online survey.

Char 2: Who will you vote for mayor?

The results of the survey reflect more favorably on the moderate candidates than their showing in the primary election last month. In fact, in every race but mayor, the more progressive of the two candidates came out on top in August.

Stuart Elway, who conducted the research, emphasized that the poll is a snapshot in time and that the numbers are likely to shift in the days and weeks to come. “We’re not trying to predict the election,” he said.

Elway also emphasized that the electorate in November is likely to look different than August’s. In the 2017 race for mayor, turnout in the general election was 10 percentage points higher than in the primary.

“The contextual takeaway is that people are just now starting to tune in to this” election, he said.

The stakes of this year’s election have taken a near-hyperbolic tone, as candidates contend that the very identity of Seattle is on the ballot. The pandemic and the protests around policing have, in many ways, set the city’s priorities over the past year and a half, forcing a reexamination of how Seattle delivers services and the definition of public safety.

And yet, it’s homelessness more than anything that is likely to decide this year’s contest. As has been true for several Seattle elections now, voters overwhelmingly named the issue as a top priority.

“What we have is a scattershot approach,” said West Seattle resident Erich Iveans, 50, who participated in the poll. He said the images of encampments downtown remind him of slums he’s seen in other parts of the world. Iveans is voting for Harrell for mayor, calling him the “least bad choice.”

When provided a list of issues to choose from, with more than one answer allowed, 79% said homelessness was important to them as they weighed their choices. Forty-seven percent named the police department and 45% named crime.

Asked in an open-ended question to name only one priority for the next mayor, 56% of voters named an issue related to homelessness — be it encampments, housing for homeless people, affordable housing or simply homelessness more broadly.

“Being in the U District, there is so much homelessness here,” said voter Michele Case. Case, 59, is voting for González because she believes the council president will be more in tune with the fact that so many people struggling with homelessness are people of color. “From what I can tell here in the U District, a lot of the homeless people are minority people, inordinately so, considering the population makeup in Seattle.”

Most voters still favor a more lasting solution to homelessness, with 54% of those polled saying the government should prioritize developing permanent housing and mental health services, compared with 41% who want to see tents moved from public spaces and people pushed toward temporary shelter.

“I think it all goes together — better policing, more housing, fewer people on the streets with mental illness,” said Case.

When it comes to public safety, 46% of those polled said they were inclined to favor more arrests and prosecutions of misdemeanors, compared with 36% who support decriminalizing crimes of poverty and addiction. Fifty-four percent said they support hiring more police officers with more training, compared with 38% who supported moving money out of the police department’s budget in order to address root causes of crime.

“That overemphasis and overabundance of empathy has led to a city that’s falling apart, and it’s impacting everybody who lives in it,” said West Seattle resident Iveans. “It’s not getting better, it's only getting worse.”

Still, other voters said it was time for the city to think differently about criminal justice.

South Seattle resident Leonor Robles, 40, is voting for González, as well as Oliver, Mosqueda and Thomas-Kennedy. She supports “the idea of expanding our view of what’s needed to address these issues. It’s not just the punitive approach. There’s a wider array of options we have with community organizations and funding for all sorts of social service programs.”

Voters so far appear to be coalescing around moderate or progressive blocs, with few saying they would vote for Harrell and Oliver on the same ticket, for example. Of the votes up for grabs after the primary, those who said they voted for Jessyn Farrell and Casey Sixkiller in the mayoral primary appear to be splitting evenly between Harrell and González. Most of Colleen Echohawk’s voters are turning toward González while all of Art Langlie’s voters are going toward Harrell.

Sand Point resident Sidney Wright, 70, said she’ll support Harrell. “I like that he wanted to get the business community involved,” she said of his campaign. “And he’s not gotten on board with rezoning. I think everyone else has gotten on board with increased density and doing away with single-family zones.”

Robles’ support for González is based on the belief that she’d be more focused on vulnerable populations. “I want somebody in the mayor’s office who’s going to be more attuned to gentrification and people of color in Seattle than I think Bruce will be,” she said.