The candidates’ stances differ on major topics, including housing, policing and taxation. 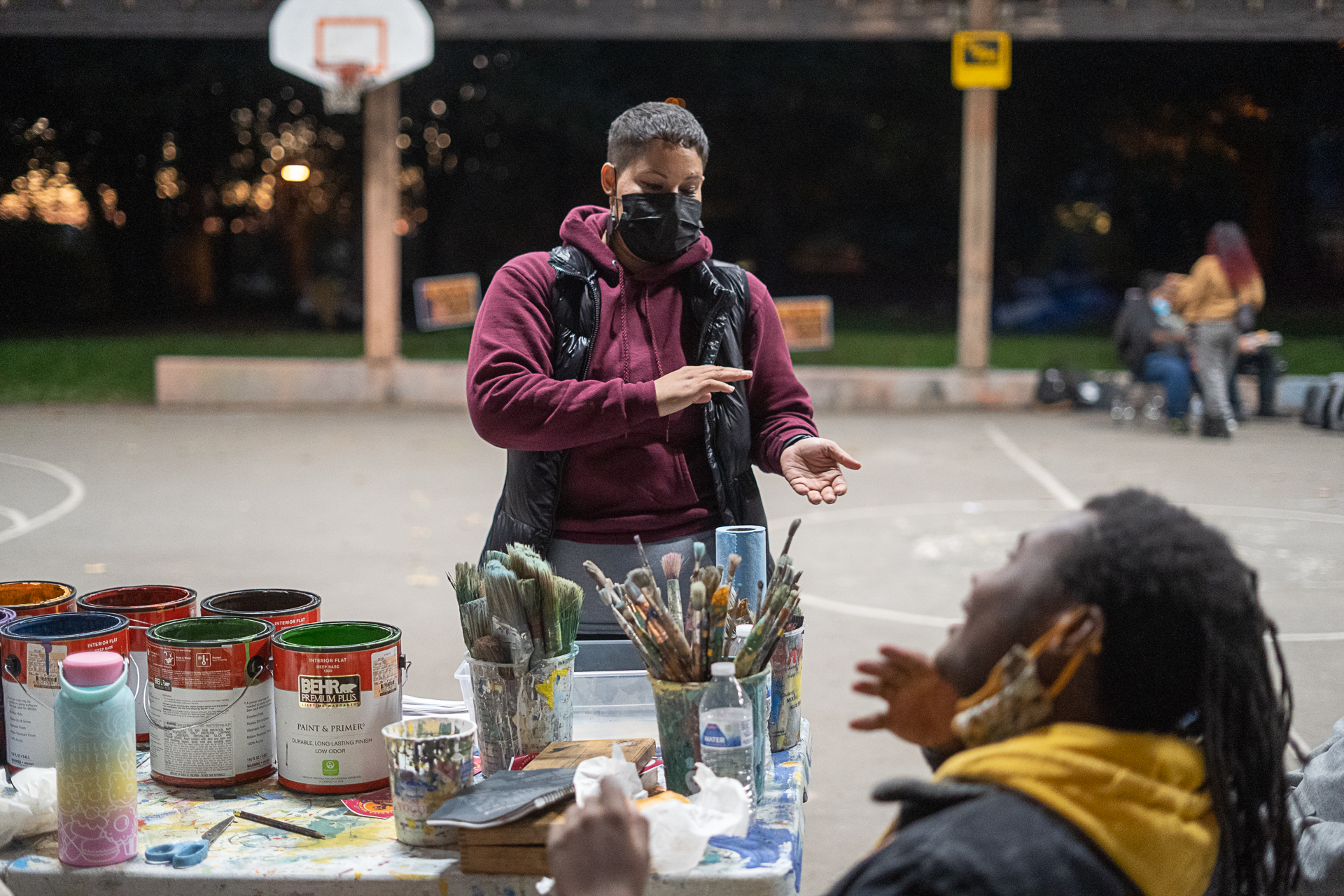 Seattle has changed since 2017, but at its core, it’s still Seattle.

The same can be said for Sara Nelson and Nikkita Oliver, each competing against the other for the single open seat on the Seattle City Council, each repeat candidates for office after coming up short four years ago.

For Oliver, an attorney and well-known activist, the change is turning the surprise success of a volunteer-driven campaign for mayor into something better funded and with more paid staff. For Nelson, co-founder of Fremont Brewing, it’s becoming sober and taking speech classes to improve her public speaking. But while they’ve both tweaked and distilled, their fundamental issues remain the same.

The race for city council parallels Seattle itself, a city in which homelessness, housing affordability and public safety each mattered immensely in 2017 and yet somehow matter more today.

The choice before voters between Oliver and Nelson is stark. Oliver is Black, uses they/them pronouns and lives in the south end; Nelson is a white woman who lives in the north. Nelson was recruited to run for office in 2017 as a possible replacement candidate for former Councilmember Tim Burgess. Oliver was vaulted into the race by colleagues from the newly formed Seattle People’s Party.

Oliver talks about Seattle’s issues from a holistic place, always connecting the dots between poverty, policing, homelessness and climate change. They’re a police abolitionist, but promises that abolition is more about what needs to be built than what ought to be torn down. Oliver fully endorses finding new “progressive revenues” to fund more permanent affordable housing, while stopping “sweeps” of public encampments. They’ve been among the most vocal proponents of diverting police resources elsewhere.

Nelson, meanwhile, starts smaller, drawing on her time as a legislative aide in City Hall. Her pitch is one of good governance, of finding the budget dust that may have slipped through the cracks in previous councils. Yes, it’s a transformative time, she said, and, yes, we should think of the root causes. But incrementalism can also be a city’s friend, she said. Nelson supports a dramatic increase in temporary housing options in order to clear public spaces of tent encampments — similar to what was promised in a now-defunct ballot proposal, Compassion Seattle. She also pledges to provide the police department with more resources for recruitment and retention.

Their candidacies are each a gamble that Seattle is more ready for a certain kind of politician than it was in 2017. The question for voters is which kind.

There are two experiences in Nikkita Oliver’s life that shaped their political views more than any other. The first was watching their father struggle to pay child support, not because he was a “deadbeat” dad, Oliver said, but because the cost was just too high. The punitive measures that followed, including jail time, destabilized him and caused him to struggle with homelessness for the better part of a decade. He died in December, and Oliver believes his lack of consistent housing accelerated his decline.

The second was Oliver’s time working in King County’s Child and Family Justice Center — simply the “youth jail” to its critics — and hearing from young people who had resigned themselves and even grown accustomed to an institutionalized life.

“At the root of both of those was, how do you meet the needs of a family?” said Oliver, sitting beneath the covered basketball court in Pratt Park, wearing earrings the shape of Africa. In the background was a campaign and community event for young people to contribute policy ideas to their platform. 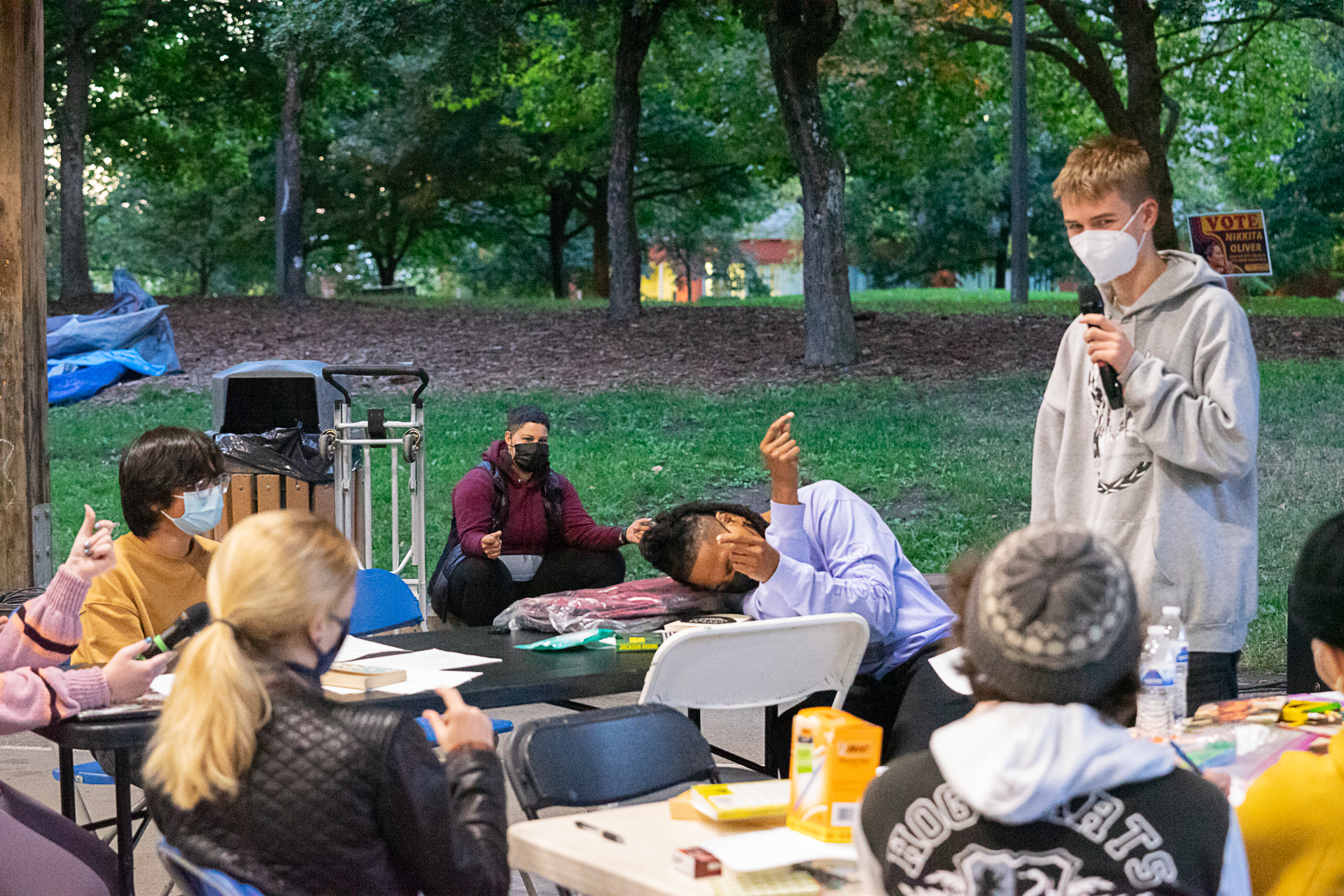 Nikkita Oliver (center left) and Jerrell Davis (center right) snap in response to the teen poets taking part in a workshop provided by the Nikkita For 9 campaign at Seattle’s Pratt Park on Sept. 20, 2021. (Chloe Collyer for Crosscut)

Nikkita Oliver (center left) and Jerrell Davis (center right) snap in response to the teen poets taking part in a workshop provided by the Nikkita For 9 campaign at Seattle’s Pratt Park on Sept. 20, 2021. (Chloe Collyer for Crosscut)

“At every turn, rather than responding with care and helping a person have a stronger base or foundation, the state responded with punitive methods that either took them away from their family or made it so they couldn't imagine a future beyond being in prison,” Oliver continued.

Oliver entered the 2017 race for mayor at a time when then-Mayor Ed Murray was largely viewed as unbeatable — months before he bowed out amid allegations of past sexual abuse. Even as a slew of candidates declared their candidacy, Oliver’s campaign proved lasting, buoyed by a groundswell of support.

At the same time, Oliver was not fully embraced by establishment organizations, which approached Oliver’s calls for a smaller police presence with caution. Oliver finished third out of 21 candidates, missing the general election by just over 1,000 votes.

In the years since, however, Oliver’s stances on police and criminal justice have become more ingrained into society — sometimes controversially — largely because of the protests following George Floyd’s murder.

“The public is becoming more comfortable with thinking about what are the other options?” said Oliver. “And actually, maybe these folks aren't that radical…. I think I'm unafraid to seize the moment.”

That shift is reflected most clearly in Oliver’s backing from labor. In 2017, the Martin Luther King County Labor Council — a union of unions of sorts that represents 100,000 workers from a broad swath of industries — endorsed Jenny Durkan for mayor. But in recent months, the council has taken a leftward turn, voting last year to expel the Seattle Police Officers Guild from its ranks. This year, members voted overwhelmingly to endorse Oliver for the council seat.

Nicole Grant, executive secretary-treasurer of the labor council, acknowledged the change is notable. “It’s a sign of MLK labor’s realignment around anti-racism. Oliver’s a renowned anti-racist and community leader,” Grant said. “[Union representatives] want somebody who’s going to be transformative.”

“I think Nikkita’s 2017 race for mayor was one of the earliest signs I can remember that the era of pecking order politics is coming to an end,” said King County Councilmember Girmay Zahilay, a progressive who unseated veteran activist and politician Larry Gossett for the county council seat.

From academia to City Hall

Sara Nelson’s politics are rooted in a deeply Democratic upbringing. At a time when Richard Nixon supporters seemed to surround her family in Sacramento, her parents were the only ones on the block with a George McGovern sign in their yard.

“Republicans were the bad guys,” she said, sitting in the living room of her Wallingford-adjacent home, which she and her husband recently built on the property they’ve owned for years.

Nelson said she’s always been drawn to public service, toying with the idea of entering the State Department. Her path instead led her to academia, where she earned a Ph.D. in anthropology. Her dissertation was about police stations in Brazil staffed entirely by women — a project that still informs her “anti-essentialist feminist” beliefs that a given identity goes only so far without adequate support and training.

It was her anthropological background that eventually landed her a job with former Seattle City Councilmember Richard Conlin. Because she had so little in the way of political experience, she was not the favorite coming in, said Conlin. But “she was able to apply an anthropological perspective to some of the things that we worked on and how people operated and how people thought about themselves, so that was really interesting,” he said. 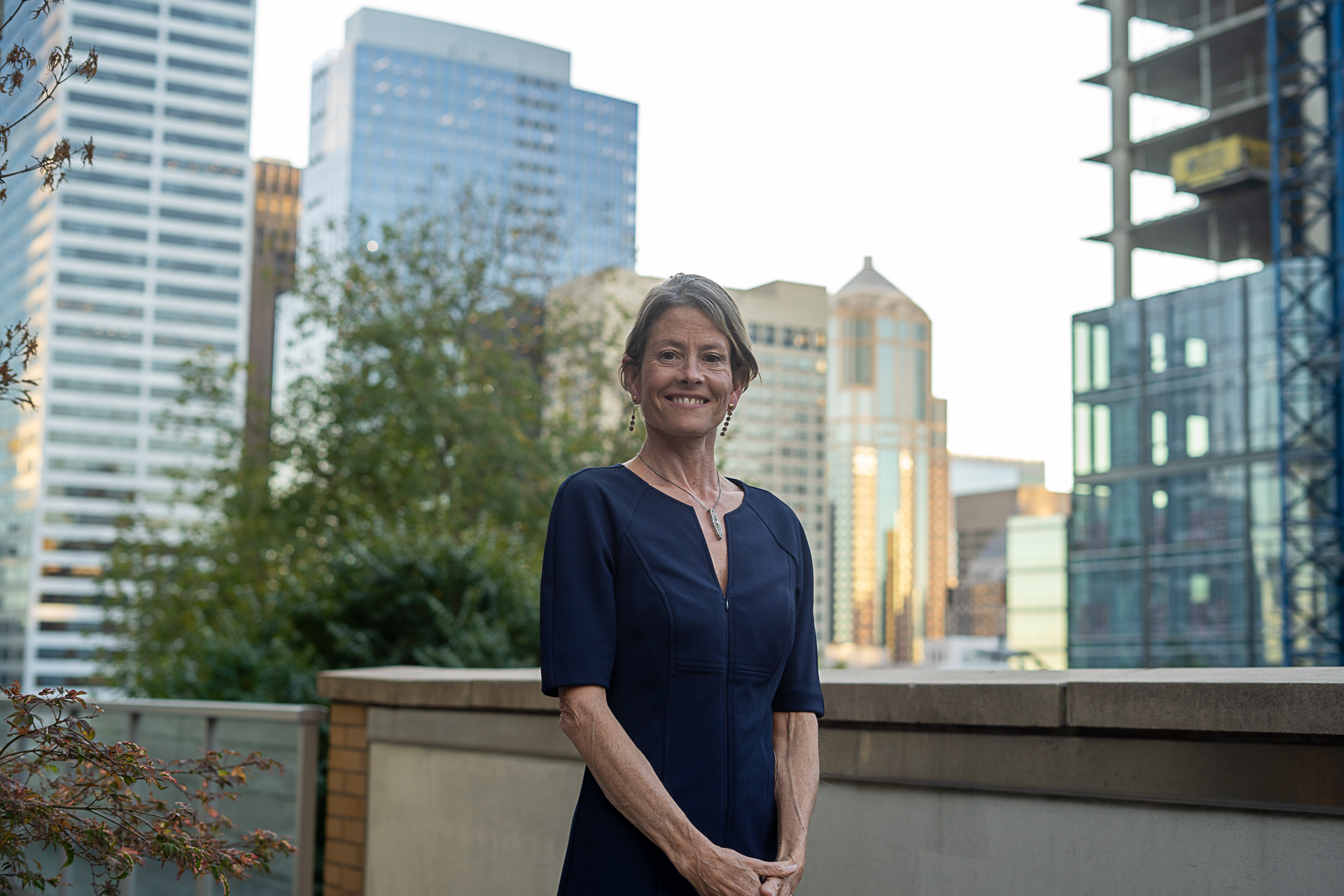 The learning curve was “almost vertical,” said Nelson, but she nevertheless became a workhorse in Conlin’s office. Among her biggest projects was pushing back on a proposal for a third waste transfer station, this one in the Georgetown neighborhood. After fielding complaints from residents, Nelson and Conlin instead worked on what became known as a “zero waste” strategy, aimed at reducing waste overall rather than further expanding the resources to collect it.

“That ability to dig into those finances, dig into the details, and say, ‘Wait a minute, this doesn't really add up,’ I think, was really, really important,” said Conlin.

Nelson left Conlin’s office for a time to raise her children. While she was away, she and her husband founded Fremont Brewing. But Nelson remained drawn to politics. She returned to Conlin’s office until he was defeated by Kshama Sawant. Even within the brewing world, she was a political figure, joining the national Brewers Association, where she helped push to overhaul how small breweries were taxed.

“She fights for what she believes in,” said Garrett Marrero, CEO of Maui Brewing and fellow active participant with the Brewers Association. “When she takes on a project and she commits to doing something, I have no doubt she’ll follow through on that,” he said.

Nelson’s background as a legislative aide inevitably leads her to talk about process — what’s possible, what’s not and what counts as a win in City Hall.

“I think it's time for a focus on implementable, doable policy solutions that will have an impact now,” she said, “keeping in mind that we do have to address root causes of a lot of the problems that we're dealing with. But the job of local government is to solve problems.”

The primary and the first months of the general election campaign have so far remained fairly tame between Oliver and Nelson. But the two have recently begun taking each other on more directly.

Asked what’s at stake in this election, Nelson answered, “The future of Seattle. I mean, that sounds grandiose and dramatic, but the extremest policies that I believe Nikkita represents and will put in place, that the council is doing right now, have not proven to help the vulnerable and have not advanced any progress on our big challenges.”

Oliver, meanwhile, said that Nelson is on the other end of Seattle’s widening “economic apartheid.”

“Sara is coming at the needs of the city from the place that she lives in the city, and the communities that she often interacts with,” Oliver said. “And for better or worse, that is not often our most marginalized and vulnerable community members…. When Sara talks about gun violence, it's something she's read about. She's not gone to any of these kids’ funerals. I have. And so I just think we live very different lives.”

Their starkest difference is arguably their views on the police, with Oliver rallying people to push the council for fewer police resources, while Nelson said she supported a failed proposal from Councilmember Alex Pedersen to spend more on recruitment and retention.

The two also differ on taxation, particularly in support of combating homelessness. Oliver is all in on finding new sources of more progressive taxation; Nelson is not, saying she first wants a better accounting of how money is being spent now. Nelson has made clearing public spaces of tent encampments a key part of her campaign, with some questions still unanswered about where those people should go. Oliver is calling for the “sweeps” to end.

Nelson also raises concerns about landlords buckling under the weight of the council’s tenant-forward regulations; Oliver has called for more protections for renters.

What each shares is the belief that they’re pushing for a change away from a status quo that’s falling short — and a belief that enough voters are on their side in support of the sort of change that needs to happen. One of them is right.