Harrell and González spar over Seattle zoning, housing and more in debate

The first televised debate of the candidates for Seattle mayor focused heavily on homelessness, despite the planned topics of business and the economy. 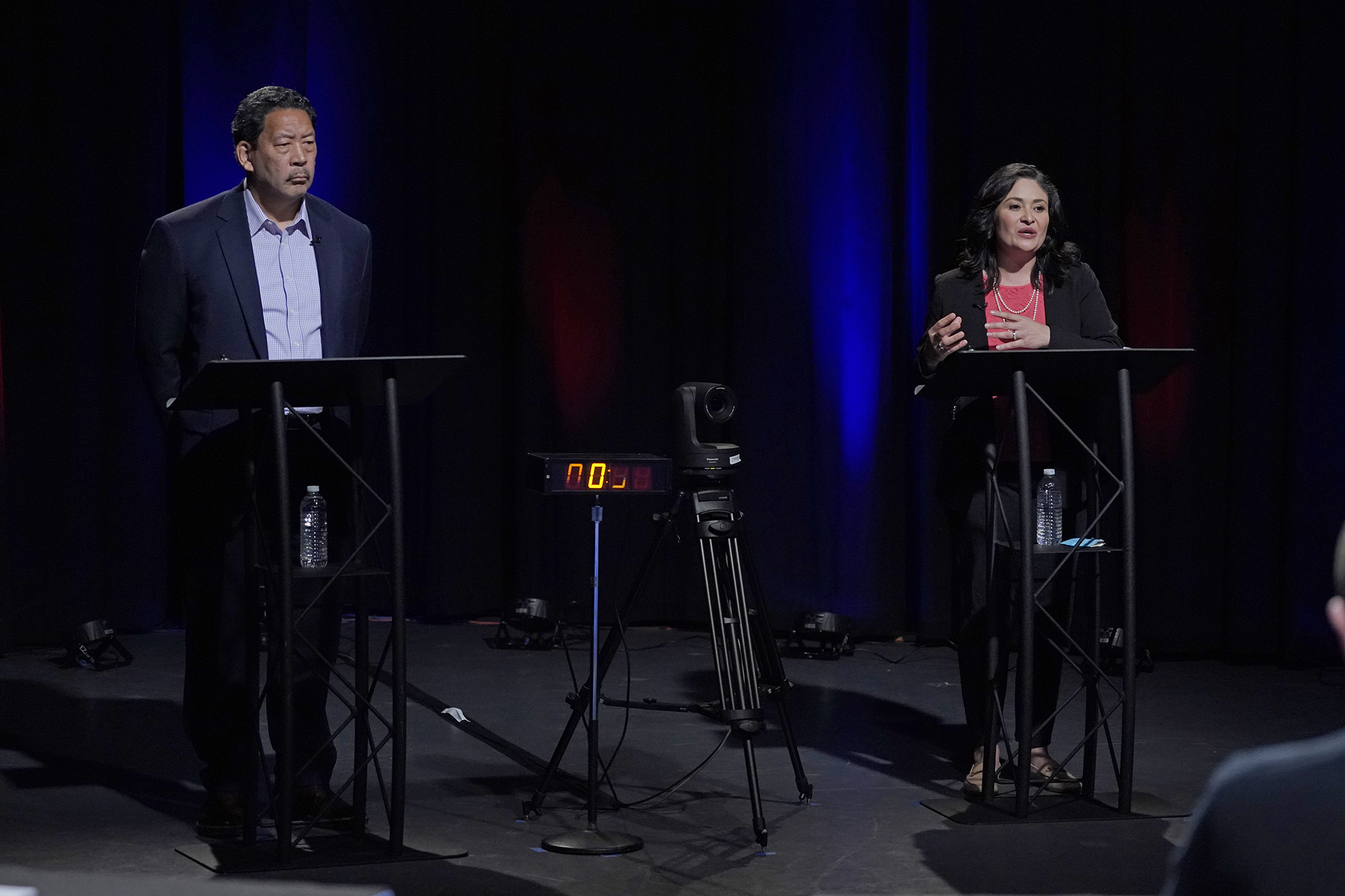 The tone of the first televised debate between the two candidates who want to be Seattle’s next mayor, Bruce Harrell and Lorena González, quickly turned confrontational Thursday, as the two former colleagues fought to distinguish their strategy and vision for the city.

The two worked together in City Hall for four years, often civilly, but on Thursday they exchanged frequent verbal blows, referring to one another only as “my opponent.”

The theme of the debate was, in theory, about the city’s economy. It became a much wider ranging discussion about taxes, homelessness, zoning and public safety — a sign of just how interconnected so many of Seattle’s most pressing issues have become.

Harrell, who served on the Seattle City Council for 12 years ending in 2019, sought to contrast himself with what he cast as a City Hall that’s failing on issues of homelessness and public safety. He repeatedly brought up the issue of public-facing homelessness, promising that his administration would be less tolerant of encampments while also working to rapidly stand-up temporary shelter.

González, who is the current president of the Seattle City Council, presented herself as the candidate most aligned with workers and the underrepresented — celebrating her broad support from labor unions and her goal of finding more avenues for progressive taxation. Like Harrell, she called homelessness the most pressing issue facing the city, but reframed her approach as prioritizing long-term solutions.

On the issue of homelessness, both said their ultimate goal was to move everyone off of the streets. Harrell said he would work hard to get people the mental health and substance abuse treatment they needed, but González said she would take a gentler approach toward helping people get inside without forcing services they aren’t ready for.

“I think it is unacceptable for people to live in our parks and in our doorways,” said González. But she framed her approach as more compassionate than Harrell’s. In addition to rapidly building 4,000 units of shelter, she said, the next mayor should make sure “that we are adequately resourcing mental health and always working on a sustainable approach, on what's the most sustaining solution to homelessness, which is affordable housing.”

Harrell also said he wanted to rapidly stand up shelter. But he spoke more forcefully against what he called a dangerous environment contained within homeless encampments and at one point threatened consequences for refusing to accept help.

“Certainly there are people with mental illness and drug and alcohol issues,” he said. But, he added, “there are also people in there that are engaging in sex trafficking and preying upon the other demographics and we do have criminal laws for a reason.”

The most forceful clash between the two came following a question about the role of large businesses in Seattle. Harrell repeatedly called on those corporations, like Amazon, to “be aligned with the issues, many of the issues that they caused.” On taxation, Harrell said the authority largely lay with the state to come up with a more progressive tax structure. He pointed to his numerous endorsements from state legislators.

González, who has been a fierce proponent of various incarnations of a payroll tax on the city’s largest businesses, said the next mayor should not punt responsibility to the state. “It is critically important for us to make sure that we have a mayor who is serious about requiring all large, profitable corporations to pay their fair share,” she said.

González then went after Harrell for his base of donor support among large businesses and real estate and development interests as evidence that he would not fight as hard on behalf of workers.

“Follow the money and the money will tell you that my opponent is benefiting in this campaign from those particular corporate and moneyed interests in our city,” she said.

Harrell hit back, pointing to his support from construction unions, major political figures in the state and, more importantly, from certain pockets of voters in Seattle during the primary.

“When I met people at Green Lake and Broadview-Thomson Elementary, there were no corporations there,” he said. “These are the people of Seattle that are saying, ‘We like your messaging.’ So that narrative is a false narrative.”

Another point of clear contrast was on zoning. Harrell attacked González for allegedly wanting to abolish single-family zoning across the city. “My opponent is part of supporting the total elimination of single-family zoning, which is just not my narrative and not my approach,” he said. The city still has unused density capacity, he said.

González did not specifically call for eliminating single-family zoning, and said she was seeking more livable and affordable neighborhoods. She also tied the issue back to racist redlining laws in the early 20th century.

“I believe that it is important for us, in order to create a city that is not just available to the wealthy with exclusive neighborhoods and million dollar homes, that we must reform our zoning laws to allow for more housing choice in our most attractive neighborhoods,” she said.

The debate ended on the issue of policing. Harrell repeatedly tied González to her comments from last summer, when she endorsed the idea of defunding the police by 50%.

“When you openly say your goal is to defund the police department by 50%, realizing that 90% of the cost of that department is personnel related, there is going to be an aftershock to that,” Harrell said. “And one of them is going to be small businesses needing protection and they need help.”

González sought to dispel any notion that she held personal animosity toward police officers. But, she said, the Police Department and public safety remain in need of a major overhaul. But she did not think the city should agree to demands from the business community to pay for private security downtown.

“I made a commitment to look at shifting dollars away from the Police Department in direct response to the murder of George Floyd and the action we saw in the city,” she said. She added, “We have to have a leader at the top who is going to make it clear that it's her expectation that these public safety employees show up every day and deliver the services that are being asked of them to deliver.”

The two opponents will face each other in one more major televised debate in two weeks, which will focus more specifically on public safety. Meanwhile, ballots were mailed this week and must be postmarked or placed in drop boxes by Nov. 2.