Candidates Lorena González and Bruce Harrell speak Thursday, Oct. 28, 2021, in Seattle during the second of two debates before the November election for  mayor. (Elaine Thompson/AP, Pool)

Bruce Harrell pushed for having a sufficient number of officers — albeit reimagined ones — to respond to crimes and other incidents. Lorena González emphasized the need to take different approaches to get at the root causes of crime and gun violence.

Harrell, who served on the Seattle City Council for 12 years, through 2019, made a point to highlight what he felt were failures of the current city council, including González. He repeatedly pointed to promises to "defund the police" that were made after George Floyd was killed in 2020 by police in Minneapolis.

González, the current city council president, said Harrell is stuck in an unsuccessful effort to reform a police department with deep-seated cultural issues. She noted that the Seattle Police Department had a large contingent of officers under investigation for their involvement in the Jan. 6 Capitol insurrection and who used tear gas against thousands of citizens during the 2020 protests.

The solution, she said, was to look at alternatives to traditional law enforcement and to reduce the body of work handled by police, rather than focus on the number of officers.

“I still think it’s important for the city in this historic moment to continue to evaluate how we can invest in community safety and non-law enforcement systems,” she said.

Harrell called for more officers and noted that under González’s tenure as public safety chair of the council, a position he also held, there was a drop of 143 Seattle Police Department officers. Seattle and other large city police departments have had trouble with turnover for years, with many departments offering large signing bonuses to new recruits.

The candidates addressed policing at the end of a televised debate earlier this month, but were able to discuss the issue further  Thursday night. And as was the case with the earlier debate, the two candidates continued to address one another as “my opponent,” rather than by name. 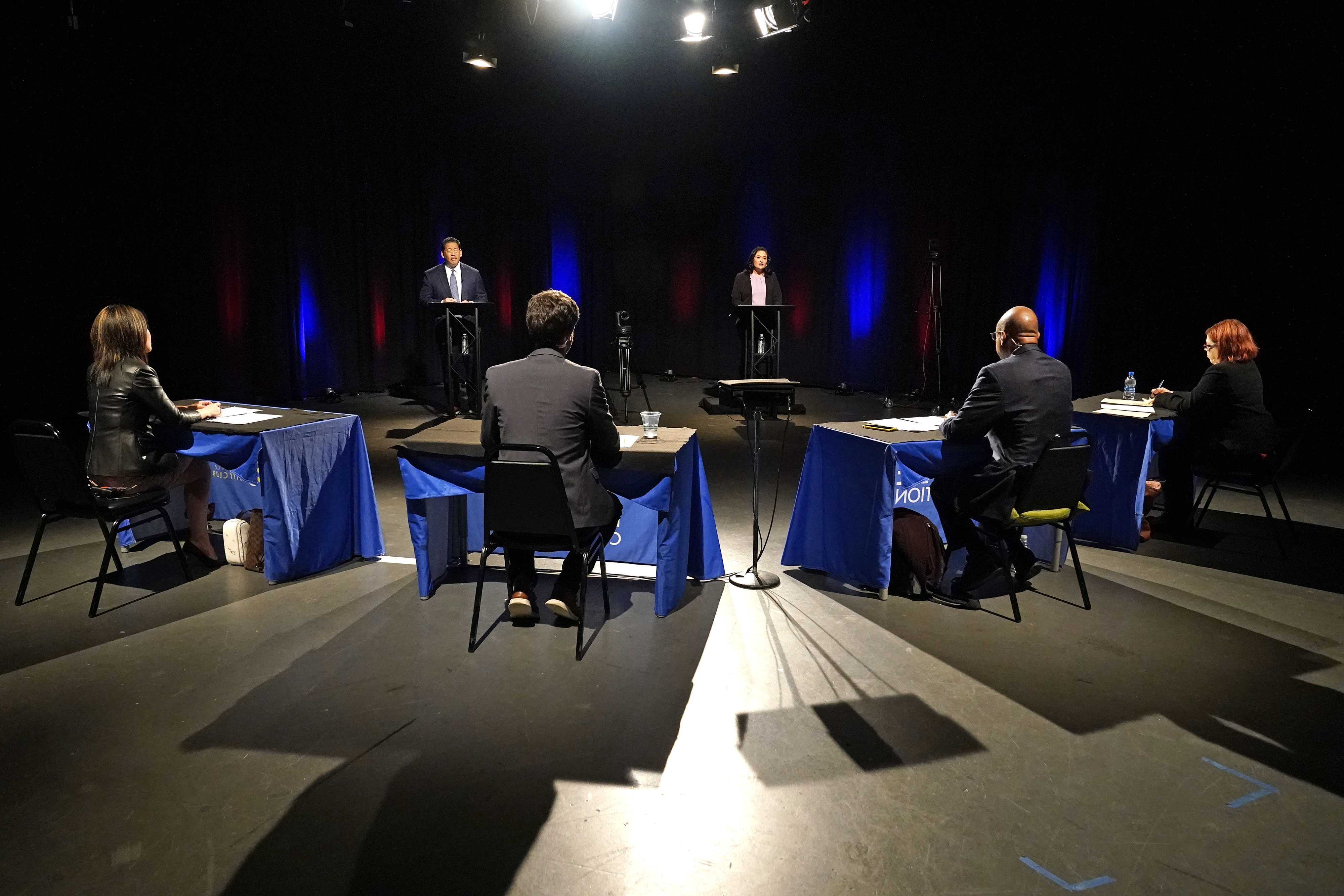 Bruce Harrell, back left, and Lorena González are questioned Thursday, Oct. 28, 2021, in Seattle during the second of two debates before the November election for mayor. (Elaine Thompson/AP, Pool)

Bruce Harrell, back left, and Lorena González are questioned Thursday, Oct. 28, 2021, in Seattle during the second of two debates before the November election for mayor. (Elaine Thompson/AP, Pool)

The two televised debates were presented by the Washington State Debate Coalition, which includes Cascade Public Media. Crosscut reporter David Kroman was on the media panel.

Harrell, as he has done during his campaign, continued to paint his candidacy as a solution for the problems created by the current council, including its inability to tackle key public safety issues, homelessness and gun violence.

He proposed a new technology to monitor gunshots and violence, which González said would be invasive to communities and would not address the root causes of gun violence.

Harrell also advocated mentoring of repeat offenders and offering them an empowerment curriculum to show them why they do not need to repeatedly commit crimes. González responded with a hint of dry humor, asking if Harrell wanted to address people with significant mental and behavioral issues, including drug abuse, with mentoring and a “self-affirmation course.”

González responded to the same question about repeat offenders by saying the city needs to address underlying causes, including substance abuse and housing insecurity, and to stop chronically underfunding programs that do just that.

Harrell also pushed for efforts to remove guns from people who are intoxicated and to reduce the number of guns an individual can buy. González pushed for responding to mental health issues that may cause suicide and gun violence and advocated for better firearm storage and enforcement of existing laws to remove guns from people who illegally possess them. She also backed penalties for not reporting lost or stolen guns.

“My vision in this area is to prevent the gunshots in the first place,” she said. “We do that by getting the guns out of our communities and by giving our youth and others in our community the tools they need to survive and be resilient — that is jobs, housing and better education, so they don’t have to resort to guns in the first place.

Harrell also talked about graffiti — in response to a question about shoplifting. “Graffiti is driving me crazy in the city ... in all this anti-social behavior, we have to do a deeper dive and understanding the root cause of this,” he said.

González brought the conversation back to public safety outcomes and said, “Let’s talk about what are the real solutions in addressing public safety. It’s not just about hiring more guns and badges for the city of Seattle. It’s also about finding alternatives to law enforcement.”

While public safety was the topic of the debate, the candidates also spent several minutes on a recent campaign ad from González regarding Harrell’s statements following sexual abuse allegations against former Mayor Ed Murray

The point of the ad was to question Harrell’s support of abuse survivors, including those involved in the Murray allegations. However, the ad was pulled after Black community members said it was racist because of its juxtaposition of a white sexual abuse survivor the ad featured with Harrell, who is Black and Asian American.

Harrell called the ad a “Hail Mary” that was divisive, and he praised the communities of color for calling González out.

“The community has spoken and that’s the kind of unity we want to see,” Harrell said.

González acknowledged that the ad had caused harm to communities of color and that she was “deeply sorry.”

“It became clear the ad was no longer productive because of the harm it was causing and was doing the last thing I want to do, causing harm in communities of color and causing silence among our BIPOC survivors,” she said.