As city council members, Lorena González and Bruce Harrell frequently voted on the same side, except on a few key issues. 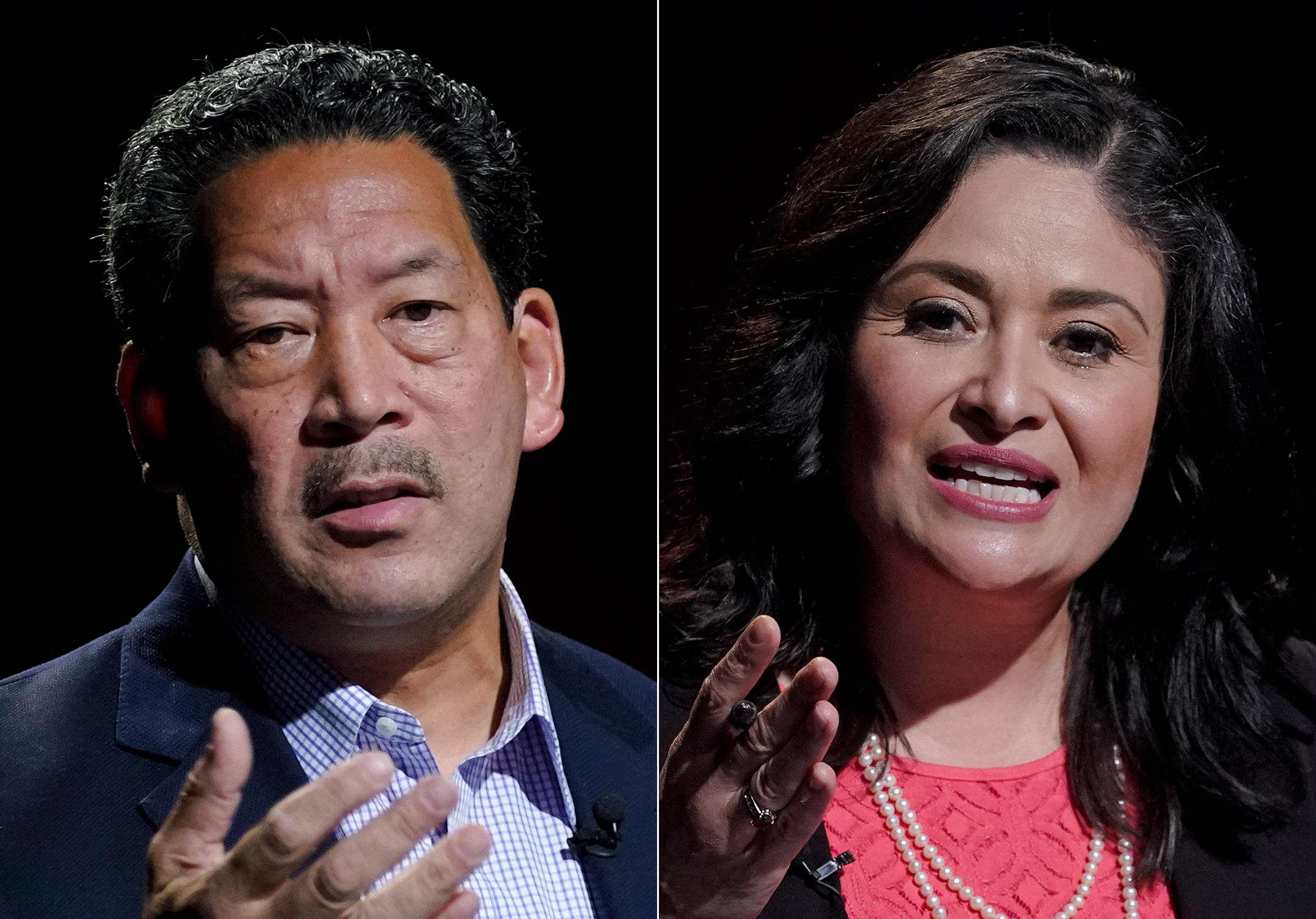 Over the course of four years and thousands of votes together on the Seattle City Council, mayoral candidates Bruce Harrell and Lorena González were on opposite ends of just seven full-council decisions — two nonbinding resolutions, one high-profile street vacation and four pieces of legislation, according to records kept by the city clerk.

Among those seven votes, most were relatively obscure measures unlikely to influence anyone’s ballot this November. One related to moorage in Leschi, another involved the city’s waste management contract and a third dealt with monitoring vacant buildings.

But two of the votes related to the essential issues of the current race for Seattle mayor: homelessness and taxation. The split on these measures between González and Harrell — and their subsequent justifications of their decisions — offer clues into how their philosophies on government differ.

Harrell’s vision of government is one that partners with private businesses and philanthropic organizations, mining them for expertise and, as he’s pledged to do on the campaign trail, voluntary financial support. He supports state-level reform of the tax system, but has not committed to exploring new local taxes. On homelessness, he’s fiercely optimistic that Seattle and suburban cities can unite to solve the problem.

González, on the other hand, is skeptical of relying on private partnerships to solve deep-seated problems, arguing that, at the end of the day, it's the government's duty to write lasting and effective policy. Her experiences with business groups while on the council has convinced her that asking for donations won’t work. She is committed to a regional response to homelessness, but has deeper concerns about how those efforts have unfolded so far.

That the two voted together so often reflects  the city council’s penchant for consensus — the vast majority of council votes are unanimous. Looking only at the final tallies papers over the fights in private meetings and amendments in committee that preceded the ultimate votes.

For city residents, however, that record of consensus means they must plumb deeper than voting records to decide whom to support for the city’s next mayor. Splits between council members are meaningful, but also more nuanced than the ideological canyons at the federal or even state levels.

It was 2018 and the Seattle City Council had just passed a new tax on large businesses. The negotiations preceding the vote were tense, with Harrell fighting for a lower amount and González for higher, but the final count was unanimous in favor of a new tax.

The vote that immediately followed, however, was not. This was the plan for how the council would spend this new source of revenue. Harrell wanted more time to plan and voted against the spending plan.

“If there’s one thing I personally don’t think we’ve convinced the public of, it’s that our plan is the right plan or is strategic or we’re pulling on the resources of all around us,” he said at the time. “There might be real estate executives or software developers that could lend us a hand.

This refrain has been a familiar one for Harrell as he has hit the campaign trail — an optimism that he can marshal the vast resources of Seattle to improve government’s operations. Persuading the city’s powerful companies and philanthropic organizations to participate is central to his platform. “I believe I will be very successful in raising over $100 million in philanthropic funds that will be used for Seattle,” he said in an interview, adding, “There are untapped resources out there if we know how to tap into those resources.”

González voted in favor of the plan for spending the head tax dollars, expressing her confidence that the mix of permanent affordable housing and shelter the council had struck was the right one. For her, the vote was the culmination of a yearlong reckoning with the major business advocacy groups in Seattle. In late 2017, she voted against a similar tax, hoping that she could have a conversation with the business community about what sort of taxes they’d accept. But those groups declined to participate.

“Those experiences have led me to believe that simply relying on [business’] purported social responsibility and philanthropic efforts has not, will not and cannot solve for the reality that we do not have adequate resources to shelter and house people who are living in our parks and in our rights of way,” she said in an interview.

In the final weeks of Harrell’s last term on the council, he and his colleagues were considering an agreement to establish a new, county-level homelessness authority — a step toward the long-sought goal of a more “regional” approach to addressing the issue. For Seattle, this would mean moving much of its work and money dedicated to homelessness into a body that would include suburban cities.

The vote was the culmination of months of work and an urgent priority for Mayor Jenny Durkan, just before several members of the council — Harrell, Sally Bagshaw and Mike O’Brien — were about to cycle out.

When the vote was put to the council, only González voted against it. She raised several concerns, namely that the body foreclosed the option of raising new taxes to address homelessness and that the suburban cities with which Seattle would share the table were not explicitly required to follow “evidence- based practices, so that our money is being used to fund programs or strategies that we know will work or have worked or show the promise of working for the specific needs of specific communities,” González said at the time.

Today, González is emphatic in her support for regional solutions and sits on the governing committee of the new authority. But, she said, her concerns are being realized. She pointed to fights that some of those suburban cities have waged against new shelter space in their cities, including the Renton City Council voting to limit shelter after hosting clients of Seattle’s Downtown Emergency Service Center in an empty Red Lion hotel. Some of those cities, including Renton, Issaquah and Snoqualmie, have also opted to go their own way when it comes to raising taxes for homeless services rather than participating in the county-led effort.

“That was just within the first year of the regional homelessness authority being in place, so that doesn't inspire a whole lot of confidence,” she said.

Her solution as mayor is, one, “to make sure that we are advocating for the needs of unhoused folks in our city and for the regional homelessness authority to actually be producing results that are consistent with things that we know work,” she said. But it also goes back to the question of taxation. Seattle needs to simultaneously fund more shelter options and to do so with “progressive revenue on the wealthiest and largest corporations in our city,” she said.

Harrell, who voted in favor of establishing the new authority, said it is still a work in progress. But of the challenges of bringing together suburban cities, he said he’s optimistic that his endorsements from the mayors and representatives in those areas can collectively push the body toward collective solutions.

“I fully understand that they are under pressure from their constituents as well,” he said. “And many of them may want the problem to leave their jurisdictions and simply come to Seattle. So rather than denigrating them, I need them to understand that they can play a partnership role with us.”

And, again, he said Seattle should simultaneously tap the resources of private companies and philanthropies to supplement shelter.

Former Councilmembers Sally Bagshaw and Mike O’Brien shared the dais with both González and Harrell over all four years the two overlapped. Bagshaw is now backing Harrell for mayor while O’Brien is backing González.

For Bagshaw, who initially supported Colleen Echohawk for mayor, Harrell’s confidence in his ability to rally people and entities together is not unfounded.

As a colleague, “he didn’t strike out on his own,” she said. “He brought people together. He did a nice job of offering places for people to talk and think and consider options. In my experience I could count on him. If he told me something he would do, I could count on him to do it.”

O’Brien agreed that, as council president, Harrell made space for other members to pursue their own goals. But he was not someone who had many of his own initiatives. González, on the other hand, was more likely to take a strong stand, he said.

“Lorena as council president approached it as more of an activist, which is how I would have approached it,” he said. “I appreciated getting to partner with her to get legislation done that she was championing. I imagine if you were opposed to her actions that would have been frustrating, but that was not the case for me.”

Harrell is now running a campaign against City Hall and the council in particular. It’s a tenuous exercise at times, because he also speaks glowingly of the legislative body while he was a member. “I will defend the IQ and the ability of the city council compared to any city council in the country,” he said of his time there. “I took pride in the fact that we had a council that did their best to work together” — including with González.

But, he said, the council has changed since he left and the comity that was there when he served is lacking. “You see them casting aspersions on one another, and the public can sense that lack of cohesion,” he said.

González agreed that things have changed since Harrell left — namely because of the pandemic and the protests following George Floyd’s murder. “I was on the city council for four years without having protesters come to my house,” she said, “without having to figure out how to create ongoing relational connectivity with people I'm serving when it's quite literally deadly to be in the same space together.”

González argues she understands the new reality and will slide more easily into being mayor. “I think I represent the new generation of politics in our city and in our nation,” she said.