If the results hold, this election will represent a major setback for the growing numbers of people in Seattle calling for a radical rethinking of criminal justice in the city. 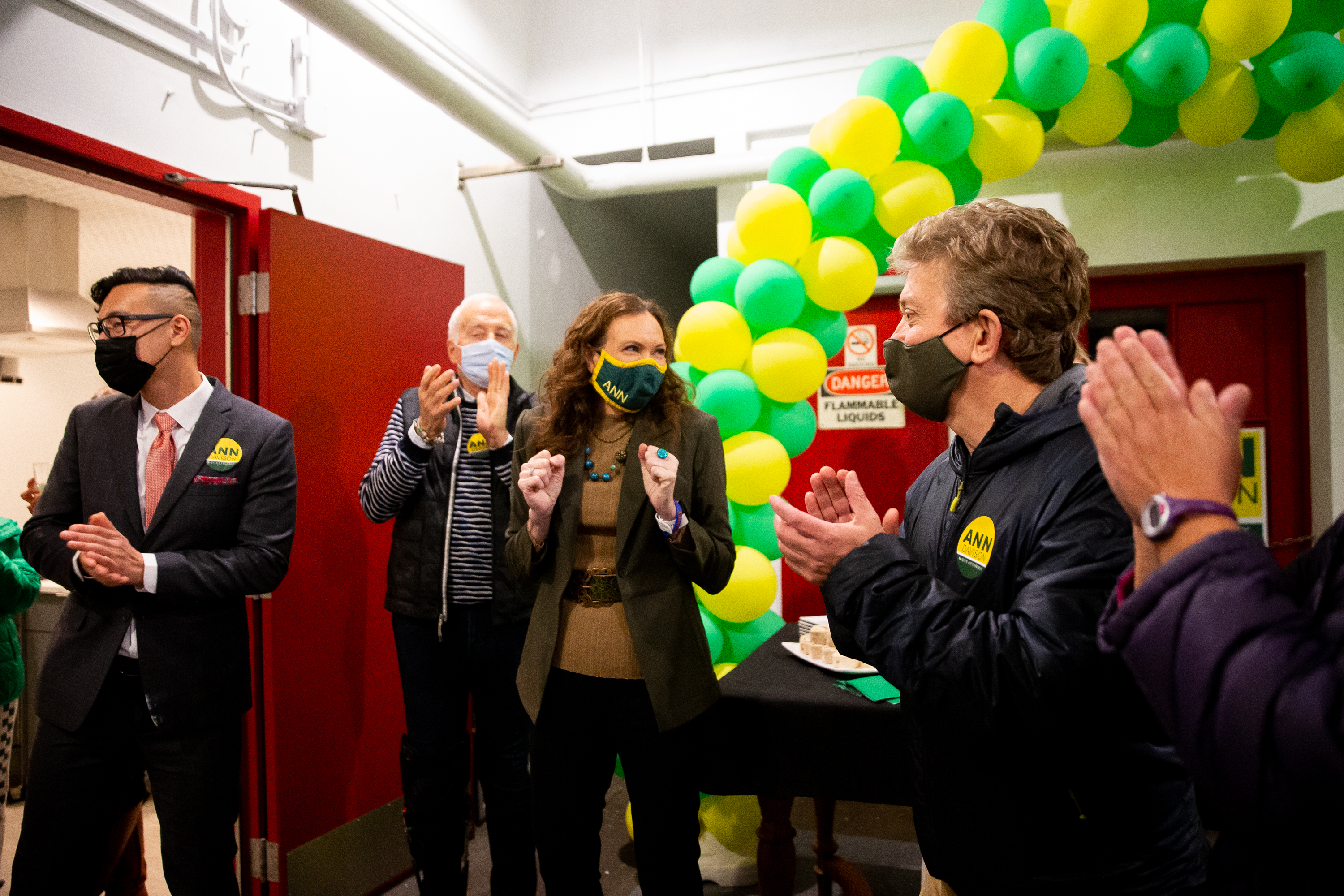 Seattle is poised to elect Ann Davison to be the city’s top attorney, making her the first woman to hold that role since the position’s founding in 1875 — and the first Republican in the office since 1989.

Davison, a civil lawyer and arbitrator with limited courtroom experience, is leading former public defender Nicole Thomas-Kennedy 55% to 44% in results as of Thursday. That margin is likely to shrink in the coming days, but almost certainly not enough to close the gap.

Davison supporters filtered into a fire station Tuesday evening during the half-hour leading up to the election results drop. A green and yellow arch inside welcomed enthusiasts, some of whom donned Davison-themed stickers with the same color scheme.

They cheered and clapped when the announcement came around 8:15 that Davison led in the city attorney race.

“I probably will cry,” she said. “If you’ve heard me speak in public you’ve probably seen me cry already.”

Davison thanked those who she said put some of their lives on hold for the campaign and “for what we can do for the future of our city.”

“It is great to have this result,” she said. “But I specifically want to say thank you to the people who have worked so hard in this campaign, because this really is about all of us. And it’s always been about all of us.”

Thomas-Kennedy ran as a police abolitionist, entering the race on the momentum of 2020’s protests against police violence. Throughout her campaign, she called for a drastic rethinking of the way Seattle handled low-level crime. But her pledge to cut back on prosecuting misdemeanors was cast by Davison as reckless. Thomas-Kennedy’s posts on Twitter, railing against police and celebrating property destruction during the 2020 protests, seemed to bolster Davison’s case.

"I'm incredibly grateful for every single person who joined together in this campaign to demand a safer, more just Seattle for everyone who lives here. The primary prepared us to have to wait several days for complete results of this election, but I'm as hopeful tonight as I was then," Thomas-Kennedy said in a statement. "I know that when every vote is counted, the people of Seattle will have sent a clear message to the corporate interests that tried to buy this election: our democracy is not for sale."

Davison, meanwhile, has promised to hold a stricter line when it comes to prosecuting misdemeanors in the city. She cast incumbent Pete Holmes’ office as too lenient, which she said allowed disorder in the city and fostered an environment for more serious crime.

The Office of the City Attorney is tasked with two main functions: the criminal prosecution of misdemeanors and civil litigation on behalf of the city.

Davison’s likely election is a stunning turnabout from last summer, when Holmes looked positioned to walk to a fourth term. Both Davison and Thomas-Kennedy filed to run at the last minute, attacking Holmes from all sides. Aided by endorsements from The Stranger for Thomas-Kennedy and The Seattle Times for Davison, the two relatively unknown candidates siphoned enough votes away from Holmes that he fell short in the primary.

After Holmes was squeezed out in the primary election, Seattle voters were left with a choice between the more conservative Davison or more liberal Thomas-Kennedy. The task seemed tall for Davison, who ran as a Republican for Washington lieutenant governor in 2020 after renouncing the Democratic Party. Just 8% of Seattle voters went for Donald Trump that year. 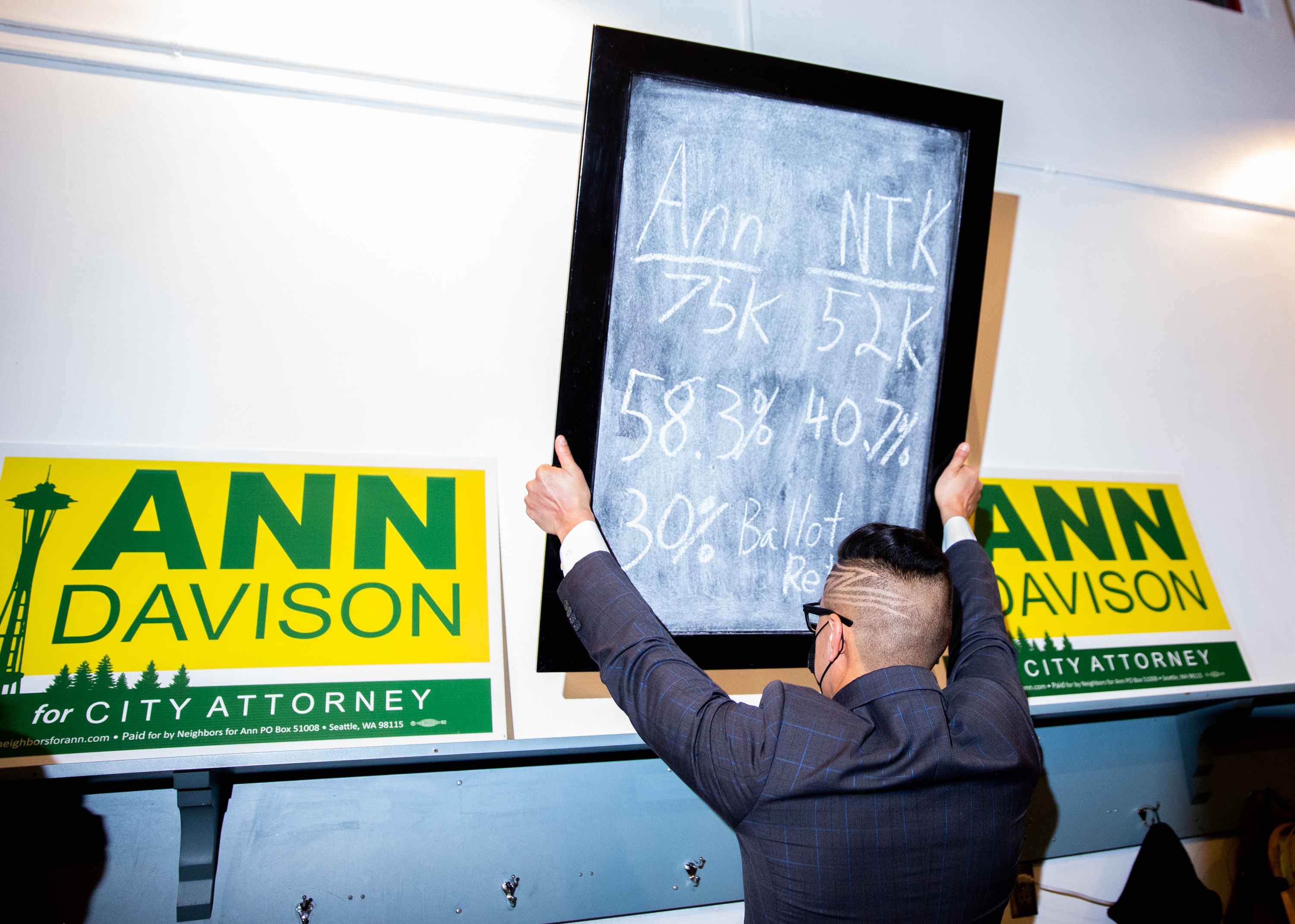 Field director Joe Rouse puts up a chalkboard showing the results of the first ballot return at an election night party for Seattle city attorney candidate Ann Davison in the Ravenna neighborhood, Tuesday, Nov. 2, 2021. Davison had a sizable lead over opponent Nicole Thomas-Kennedy in early returns. (Lindsey Wasson for Crosscut)

Field director Joe Rouse puts up a chalkboard showing the results of the first ballot return at an election night party for Seattle city attorney candidate Ann Davison in the Ravenna neighborhood, Tuesday, Nov. 2, 2021. Davison had a sizable lead over opponent Nicole Thomas-Kennedy in early returns. (Lindsey Wasson for Crosscut)

But endorsements from two former governors, Gary Locke and Christine Gregoire, both Democrats, seemed to give Seattle residents permission to side with Davison.

If the results hold, this election will represent a major setback for the growing numbers of people in Seattle calling for a radical rethinking of criminal justice in the city. Thomas-Kennedy was seen as a torchbearer for the policy demands of 2020’s protests — including calls to move money currently spent on the criminal justice system into upstream solutions.

But Holmes’ early exit, combined with fear of Thomas-Kennedy’s tweets and her message of police abolition, gave Davison an opening that she seized. The result is a City Attorney’s Office that could look far different than the one today. Davison has repeatedly pledged to file more misdemeanor cases for prosecution, while taking a more hands-off role to advising the city on civil matters. 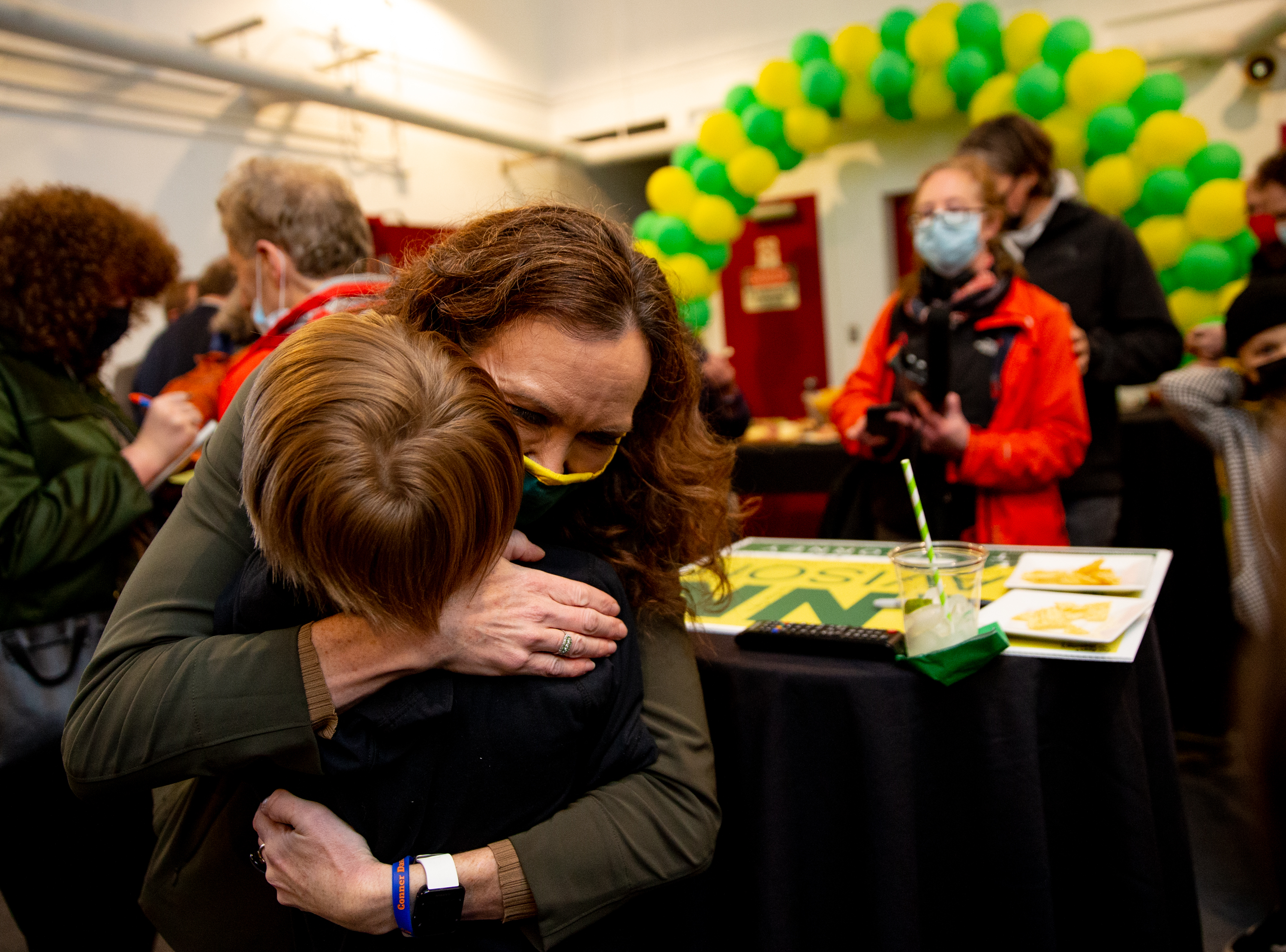