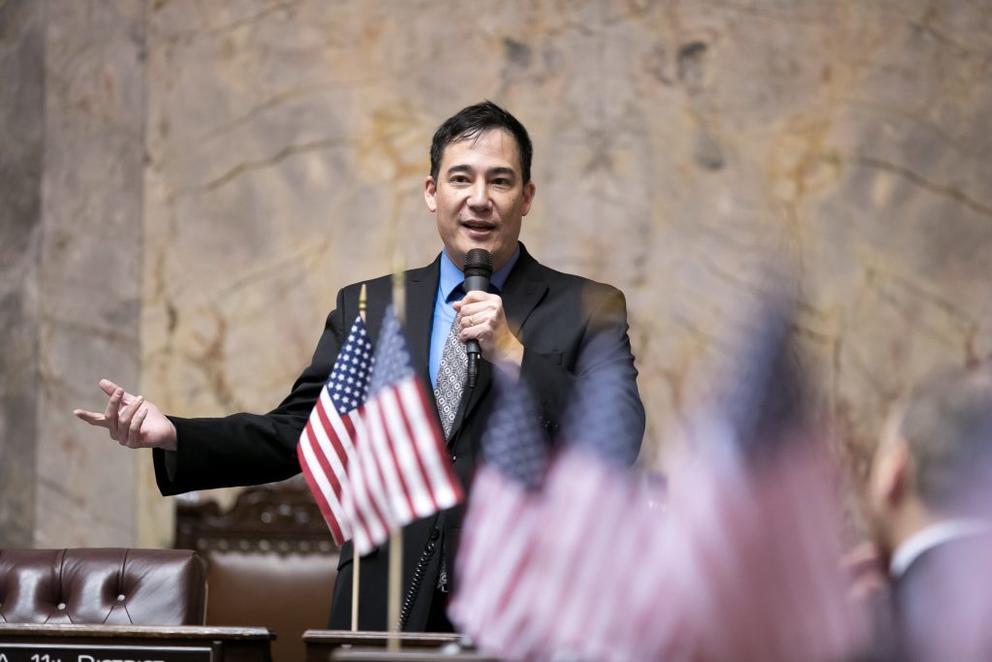 For the first time in almost 60 years, Washington state’s new chief elections official will be a Democrat.

Wyman, who won reelection to a third term last fall, is the only Republican statewide elected official on the West Coast outside of Alaska. Last month, Wyman announced she will resign to become the senior election security lead of the federal Cybersecurity and Infrastructure Security Agency (CISA).

Hobbs will take office Nov. 22; Wyman is resigning on Nov. 19. Hobbs will serve until November 2022, when a special election will be held to determine who will serve the final two years of Wyman’s term.

Inslee’s decision to appoint a Democrat immediately angered some Republicans. A few weeks ago, state Republican Party Chair Caleb Heimlich called on Inslee to appoint a Republican to the secretary of state job, saying that’s what a majority of Washington voters chose when they elected Wyman last year.

“If Gov. Inslee cares about the trust and integrity of our electoral process, he should appoint a capable Republican, just as the voters did in November of 2020,” Heimlich said in a statement last month.

But Inslee said Wednesday that Hobbs is a moderate who has shown political independence in the Legislature, making him a good choice for the job.

“Steve has demonstrated through his career as a senator the ability to act independently, to not be swayed by any party,” Inslee said in a video announcing the appointment.

“We know Steve’s relationship with the guard will help in our continued efforts on cybersecurity,” Inslee said.

Hobbs, who chairs the Senate Transportation Committee, has often clashed with Inslee on policy matters. For many years, Hobbs opposed Inslee’s efforts to enact a new low-carbon fuel standard to reduce emissions from vehicles. Earlier this year, Hobbs also was one of only a few Democrats to vote against a new tax on capital gains, which include profits from selling assets such as stocks and bonds. Hobbs' departure for the secretary of state job will mean someone else will need to take his place in the state Senate.

In a prepared statement, Hobbs called the appointment "a tremendous honor and responsibility."

"There is nothing more sacred than the right to vote," Hobbs' statement said. "I've fought for that right overseas and will do everything in my power to protect that right here in Washington. Our state leads the nation in voting access and security and under my watch I will ensure that we only move to solidify our national standing in this arena."

Hobbs, an Asian American, will be the first person of color to serve as Washington’s secretary of state, according to the governor’s office. He previously ran for lieutenant governor but was unsuccessful.

In a call with reporters Wednesday, Hobbs said he plans to run for election as secretary of state next year, with the goal of finishing the final two years of Wyman's term.

Hobbs' departure from the Senate is likely to make the Legislature more liberal and progressive, said state Sen. Joe Nguyen, a West Seattle Democrat who is one of the body's more liberal members. Whoever is picked to replace Hobbs, Nguyen predicted, will most likely be further to the left politically and “more receptive to progressive investments and progressive revenue.”

That likelihood caused Heimlich, the state Republican Party chair, to quickly criticize Inslee’s choice as being motivated by politics.

“This is a crass political move by Gov. Inslee to help pass his radical liberal agenda by removing an obstacle from the state Senate,” Heimlich said in a statement Wednesday. “This selection is a complete disservice to the voters who elected an elections professional and now are getting someone with little to no technical experience.”

Unlike Wyman, Hobbs won’t have spent years as a county elections official before becoming Washington’s secretary of state.

Hobbs told reporters that even though he lacks that background, he has significant management and leadership experience that will enable him to step into the role. In leading the Washington National Guard's COVID-19 response in Western Washington, for instance, he managed a team of about 750 people, he said.

Hobbs also pledged to "work with all Washingtonians" — including Republicans — when he takes over the job of overseeing the state's elections. He said the state GOP chair should be pleased that Inslee didn't appoint a "party hack," but instead someone who has a record of bipartisanship in the Legislature.

Wyman, for her part, has also become known for bucking her party, especially when it came to calling out baseless accusations of voter fraud. At one point, she called Trump’s voter fraud claims “ludicrous.” More recently, she pushed back against GOP gubernatorial candidate Loren Culp’s unfounded claims of fraud in the 2020 election, which Culp lost.

In a statement Wednesday released through the governor’s office, Wyman indicated she supported Hobbs as the choice to replace her.

“As a state senator, Steve has a demonstrated record of seeking bipartisan solutions to complex problems, which is essential to the position of secretary of state,” Wyman’s statement said. “It is imperative the secretary of state  —  the state’s chief elections official  —  serve as a neutral arbiter in order to inspire confidence across the political spectrum in our election processes and results.”

In addition to overseeing elections, the secretary of state manages the state archives and registers charities and corporations.

To fill Hobbs’ Senate seat in the Legislature, local Democratic party officials will send three candidates to the Snohomish County Council, which will make the final choice, in accordance with a process outlined in the state constitution.

State Rep. April Berg, the district's other state representative, said she wouldn't pursue the job, but instead would support Lovick in his bid for the open seat.

Updated to add quotes from Steve Hobbs and from others reacting to his appointment.