Seattle voters appear to elect Bruce Harrell to be next mayor

In city council contests, Sara Nelson and Teresa Mosqueda are likely to win their races. 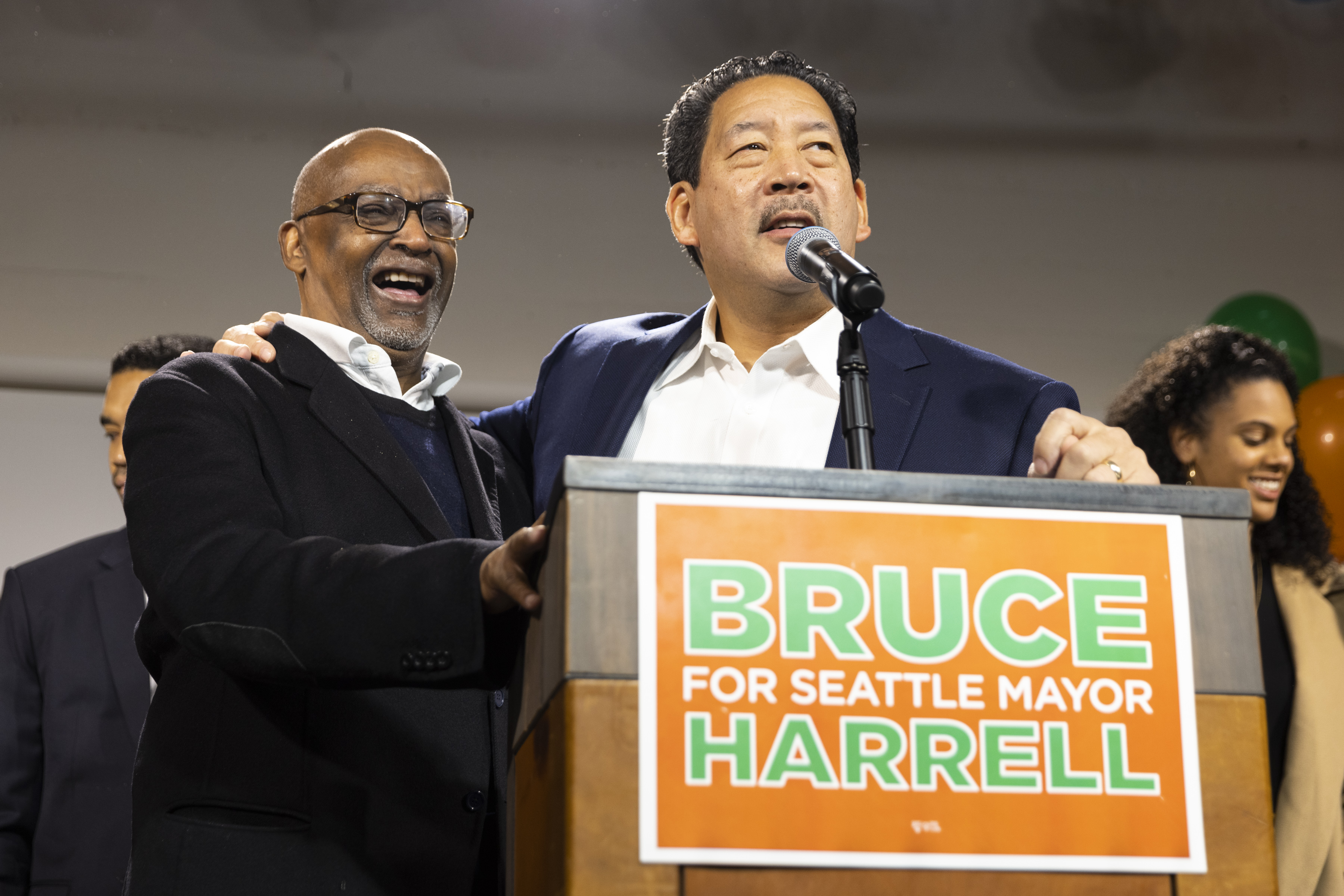 Bruce Harrell is likely to be Seattle’s 57th mayor, early election results showed Tuesday evening. Harrell will take over for outgoing mayor Jenny Durkan at a pivotal time for Seattle, as voters demand immediate and lasting solutions to the city’s homelessness crisis, prohibitive housing costs and a police department in flux.

For Harrell, the son of a Black father who grew up in the Jim Crow South and a Japanese American mother who was incarcerated in an internment camp during World War II, his likely election enables him to realize an ambition he has held since at least 2013, when he first ran for mayor.

"We're going to bring Seattle back together," Harrell told an exuberant crowd. He shared the stage with an emotional Norm Rice, Seattle's first and last Black mayor. Harrell pledged to be a unifying mayor and to find the "pathway of commonality."

Harrell is capturing a comfortable 65% to 35% lead over his opponent, Seattle City Council President Lorena González. That margin suggests Seattle voters may be validating Harrell’s message that he will improve policing by spending more, not less, and that he will take a more forceful approach to removing public homeless encampments.

González will almost certainly benefit from late-counted ballots in the coming days, which consistently favor the more progressive candidates in Seattle races. But the margin between them is wider than any Seattle candidate has ever overcome. Tuesday’s tally included roughly 50% of all ballots cast, according to a spokesperson for King County Elections.

González acknowledged her deficit, but declined to concede Tuesday night.

"The votes of so many of our voters who tend to vote at the very end have not been counted," she told a crowd of supporters. "That means we may not know until later in the week for sure who the next mayor of Seattle will be. On this campaign we respect every vote as equal regardless to when it was cast." 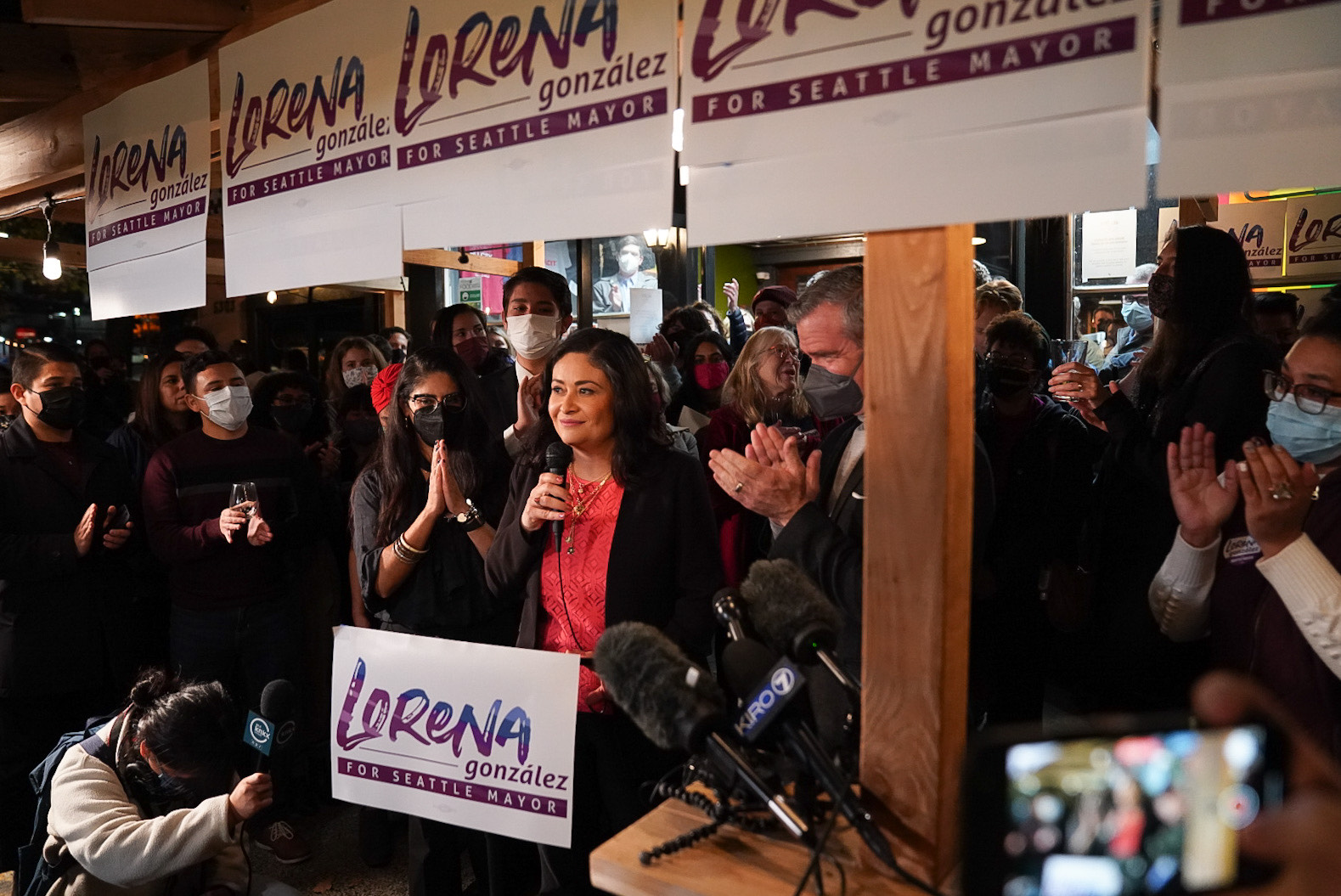 In the contest for the ninth seat on city council, Fremont Brewing owner Sara Nelson is leading attorney and activist Nikkita Oliver by 20 points. That margin could be difficult for Oliver to make up in the coming days.

Meanwhile, Ann Davison looks poised to defeat Nicole Thomas-Kennedy to be the city’s next city attorney.

City council incumbent Teresa Mosqueda is well-positioned to win reelection, the one bright spot for the city’s progressives. She leads engineer Kenneth Wilson by 5 points, a margin that, while likely enough for her to win, is nevertheless far closer than many had initially expected.

If Harrell’s lead holds, he will be sworn in on Jan. 1 as Seattle’s fourth elected mayor in the last 10 years. As candidates of all stripes have acknowledged, his first priority will be to address homelessness in the city.

But unlike past mayors, the reach of Harrell’s influence could be more limited; as a commitment to more “regional” solutions to the problem, the city has turned much of its homelessness budget and response over to the new King County Regional Homelessness Authority.

Where he will have influence is over the city’s response to tent encampments — an issue he pledged to address throughout the campaign. Harrell has made clear that he would be less tolerant of public camping and could wield a heavier hand in attempting to push people toward temporary shelter.

As he said often on the campaign trail, Harrell grew up in Seattle. A standout football player for both Garfield High School and the University of Washington, he opted for a legal career over what he says could have been a path toward the NFL.

A graduate of the UW School of Law, Harrell spent much of his early career in telecommunications. He was elected to the Seattle City Council in 2007, when every member still represented the entire city.

He chaired the public safety committee and was an early backer of body-worn cameras for police officers. He also pushed for “ban the box” legislation to limit employers’ ability to ask about criminal history.

During his time as a council member, Harrell’s colleagues didn’t view him as the most proactive, and his vote was sometimes uncertain until the final moment. But, as council president, he  allowed other members to proceed with their work largely unimpeded.

Harrell served as mayor for five days in 2017 after Ed Murray resigned the position. He then returned to his seat on the council and opted against seeking reelection in 2019.

In his race against González, Harrell made a gamble that, despite the massive protests of 2020, Seattle voters were frustrated by public camping and nervous about the large numbers of police officers leaving the department. He repeatedly brought up González’s statements supporting a 50% cut to the police department. His path was one of reform, not wholesale rebuilding — that what the police need is not fewer resources, but more to become better versions of themselves. 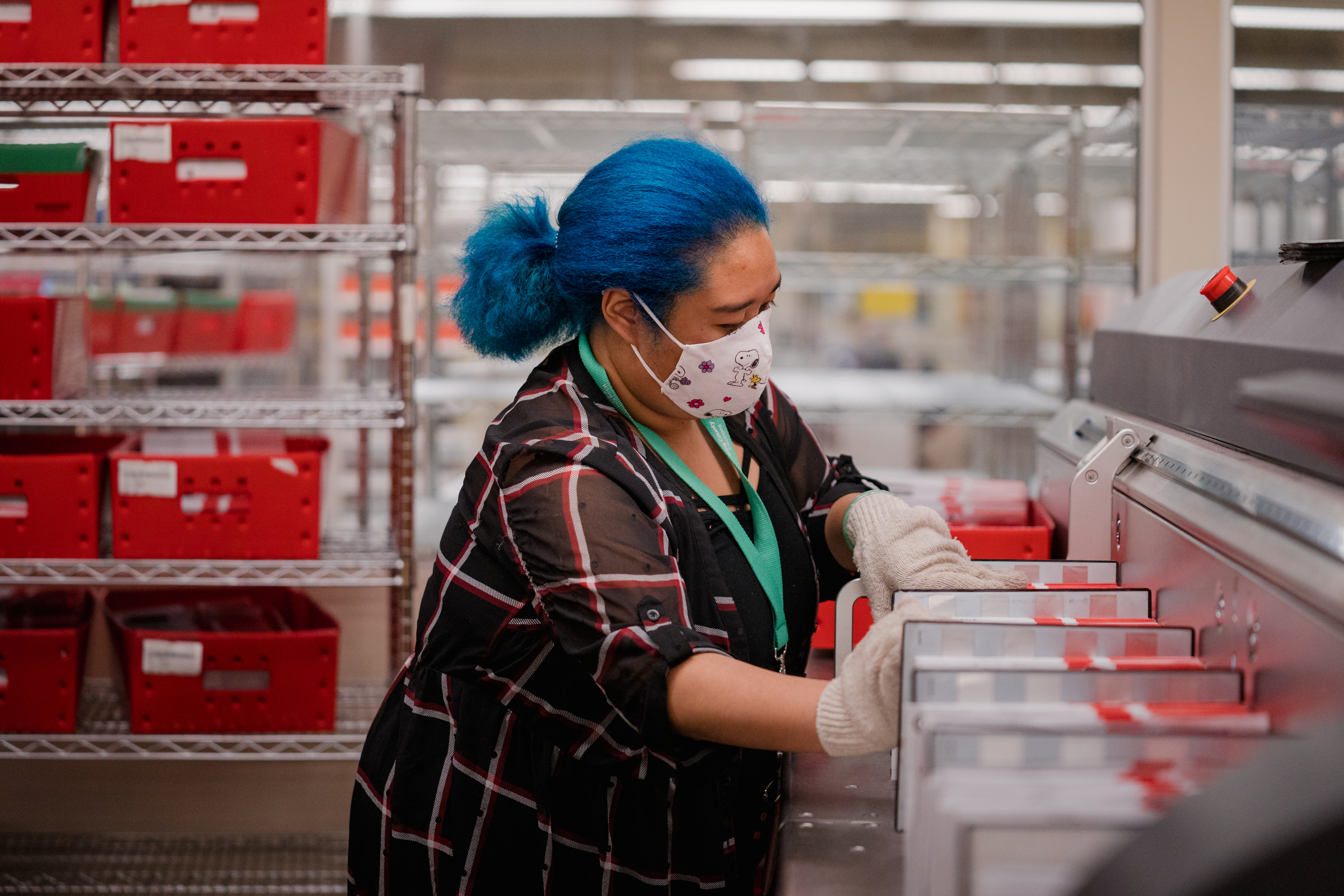 Kamisha Baseden loads ballots onto a sorting machine for processing at the King County Elections headquarters in Renton on Tuesday, Nov. 2, 2021. (Jovelle Tamayo for Crosscut)

Kamisha Baseden loads ballots onto a sorting machine for processing at the King County Elections headquarters in Renton on Tuesday, Nov. 2, 2021. (Jovelle Tamayo for Crosscut)

Tuesday’s first batch of results begin to tell the story of how voters are responding to two years of COVID-19 lockdowns, mass protests against police violence and a growing homelessness crisis. The results show an electorate reluctant to endorse defunding the police and eager for candidates who say they’ll be less tolerant of public camping.

This is Sara Nelson’s second run for Seattle City Council. She worked under former Councilmember Richard Conlin before transitioning to Fremont Brewing full time. She ran a campaign explicitly against the Seattle City Council, accusing its members of reckless abandonment of businesses and citizens in pursuit of lefty goals.

“After talking to people across this city, across racial lines, economic lines, occupational lines, one thing was constant: People were sick of the status quo, and they wanted change,” Nelson told supporters gathered at The Fisherman's Restaurant & Bar, perched at the base of the Great Wheel on Seattle’s waterfront.

Standing on a small podium, Nelson stressed that people wanted a “responsive” city council: “They want a council that gives a damn about their electricity bill, the fact that their garbage wasn’t picked up. Parks — clean parks … these things are simple and basic and the city has kind of dropped the ball on the promises of basic services,” Nelson said.

While happy with the result, Nelson didn’t declare victory: “I don’t know if I’m going to be the person that is in that seat,” she said in her speech. In a reaction, Nelson told Crosscut that the margin by which she was leading was higher than expected, but that “late ballots can make all the difference.”

After running for mayor in 2017, Oliver, who uses they/them pronouns, remained a prominent voice in the protests of 2020 against police violence, pressuring City Hall and Mayor Jenny Durkan in particular to make changes to law enforcement. Their campaign followed suit, pushing for new ways of thinking about public safety and law enforcement.

Speaking at a “mutual aid” event before the results were released, Oliver said that whatever the results of the election, they were proud of how the narrative around social justice has changes in Seattle.

“I actually think the consciousness of Seattle is continuing to shift. It will continue to shift regardless of who wins,” Oliver said.

As Seattle comes to term with a new direction in City Hall, it will also have to immediately prepare for the next contested ballot question, coming up in just over a month: Whether or not Councilmember Kshama Sawant should be recalled.