State officials said they want to make tweaks to the state’s new long-term care insurance program, after a flood of people sought to opt out. 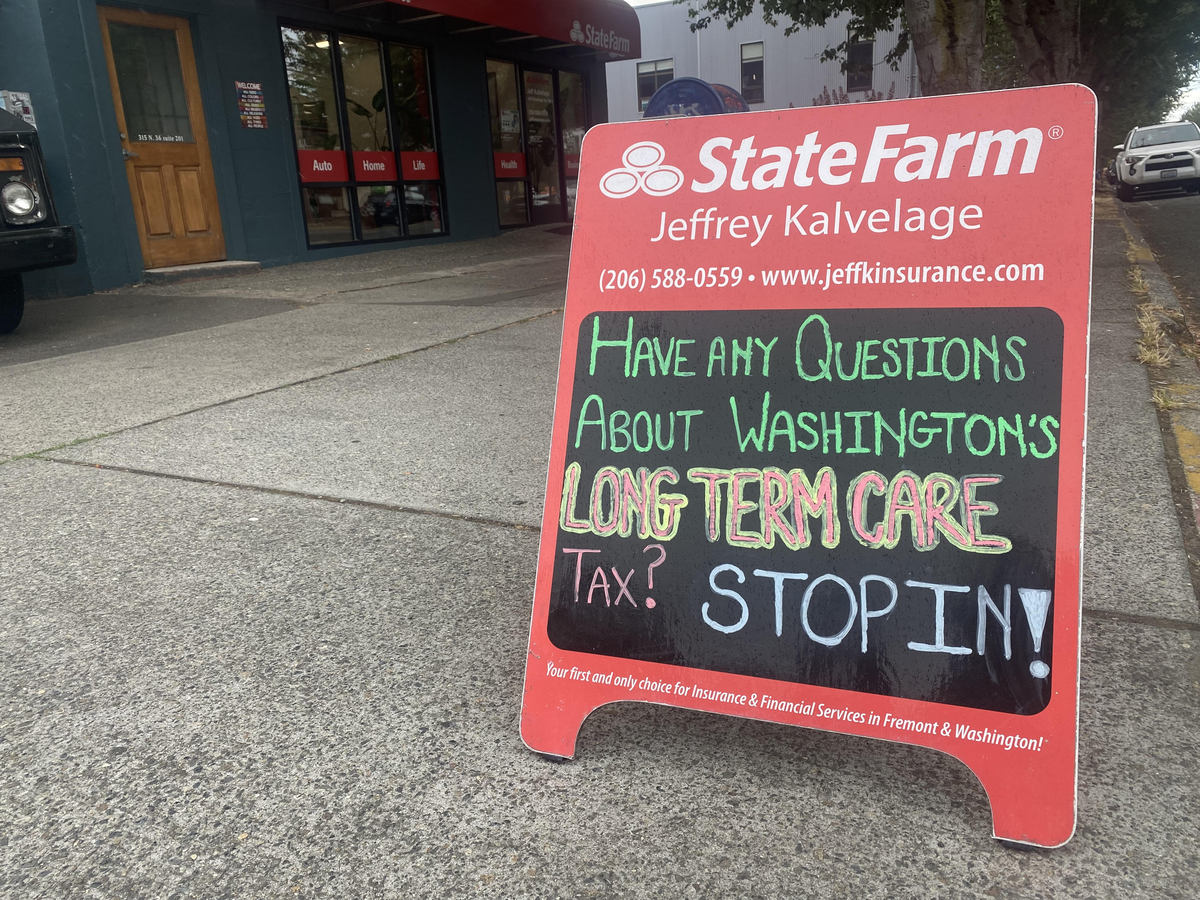 A sign on the sidewalk in Seattle's Fremont neighborhood in August invites people to talk to an insurance broker about Washington state's new long-term care tax. After hundreds of thousands of people rushed to opt out of the new long-term care program, Gov. Jay Inslee announced Friday, Dec. 17, he would be delaying the tax collections so lawmakers could make changes. (Melissa Santos/Crosscut)

A new payroll tax designed to pay for nursing care and other services for aging Washingtonians won’t take effect in January as planned.

Washington Gov. Jay Inslee announced on Dec. 17 that he would delay the payroll tax that bankrolls the program, known as WA Cares. That means employers won't be charged the premium and won't be penalized if they don't take the 0.58% tax out of workers' paychecks starting Jan. 1.

Inslee's order is designed to halt the program temporarily, until the Legislature can formally vote to delay it.

Such action appears imminent. Top legislative leaders said they plan to act swiftly to delay the program — and its payroll tax collections — once they convene for a new legislative session Jan. 10.

Still, some employers, including the state of Washington, intend to withhold the payroll tax from employees until the Legislature takes that official vote. Should state lawmakers follow through and approve a delay, any payroll tax money collected from workers will have to be returned to them, Inslee's office said.

The move to delay the long-term care program comes after more than 450,000 people applied to opt out of the new system. Insurance programs require a certain level of participation to break even.

In a written statement, Inslee said he wants to give state legislators time to make tweaks to the program, which top lawmakers said they intend to do.

“Legislators have identified some areas that need adjustments and I agree,” Inslee said in the statement.

The long-term care program, which state lawmakers approved in 2019, is intended to provide individuals who struggle with multiple aspects of daily living with a lifetime maximum benefit of up to $36,500 each. That money is supposed to pay for things like in-home nursing care, time in an assisted living facility or even home improvements, such as wheelchair ramps, that could help people age in place.

But lawmakers have raised concerns about the program in recent months, particularly as many Washington residents rushed to opt out.

The Long Term Care Trust Act included a provision allowing people to opt out of paying the 0.58% payroll tax, as long as they could show they had other long-term care insurance in place as of Nov. 1.

Top legislators said they heard concerns from constituents about the size of the tax compared with the amount of the benefit.

Other workers said that despite paying the tax, they weren’t sure they would ever benefit, either because they were too close to retirement or that they planned to move out of state. As the law is currently written, only those who remain in Washington state can collect the long-term care benefits. Those on the cusp of retirement are unlikely to qualify, either, but would still have to pay the payroll tax until they stop working.

In a joint statement, House Speaker Laurie Jinkins and Senate Majority Leader Andy Billig said they plan to address those issues in the coming legislative session, while the payroll tax collections are paused.

“Pausing the program so that it can better serve disabled veterans, military spouses, nonresidents, and near retirees will improve the program,” Jinkins and Billig said in their joint statement.

“A pause will also give the Long Term Care Commission the ability to study and make recommendations about residents who move out of Washington to retire,” added the Democratic lawmakers.

Earlier this year, lawmakers and insurance companies also had expressed concern that many people rushing to buy private long-term care insurance might simply drop those plans after they successfully opted out of the state program.

Jinkins and Billig said the state’s Long Term Care Commission also will study how to “assure that those who have opted out of the program maintain their private insurance policies."

While Inslee's delay of tax collections lasts only through April 2022, legislators intend to vote to delay the tax for at least another year beyond that, Jinkins and Billig said.
That would give the state time to study fixes and implement them in the 2023 legislative session, which is scheduled to conclude in April 2023.

Updated Dec. 17 to add detail about how long legislators would like to delay the tax and how many people have applied for exemptions. Updated Dec. 24 to reflect that some employers, including the State of Washington, still plan to collect the tax from people's paychecks until the Legislature formally votes to change the long-term care law.