About 1,200 ballots are yet to be counted, officials say. 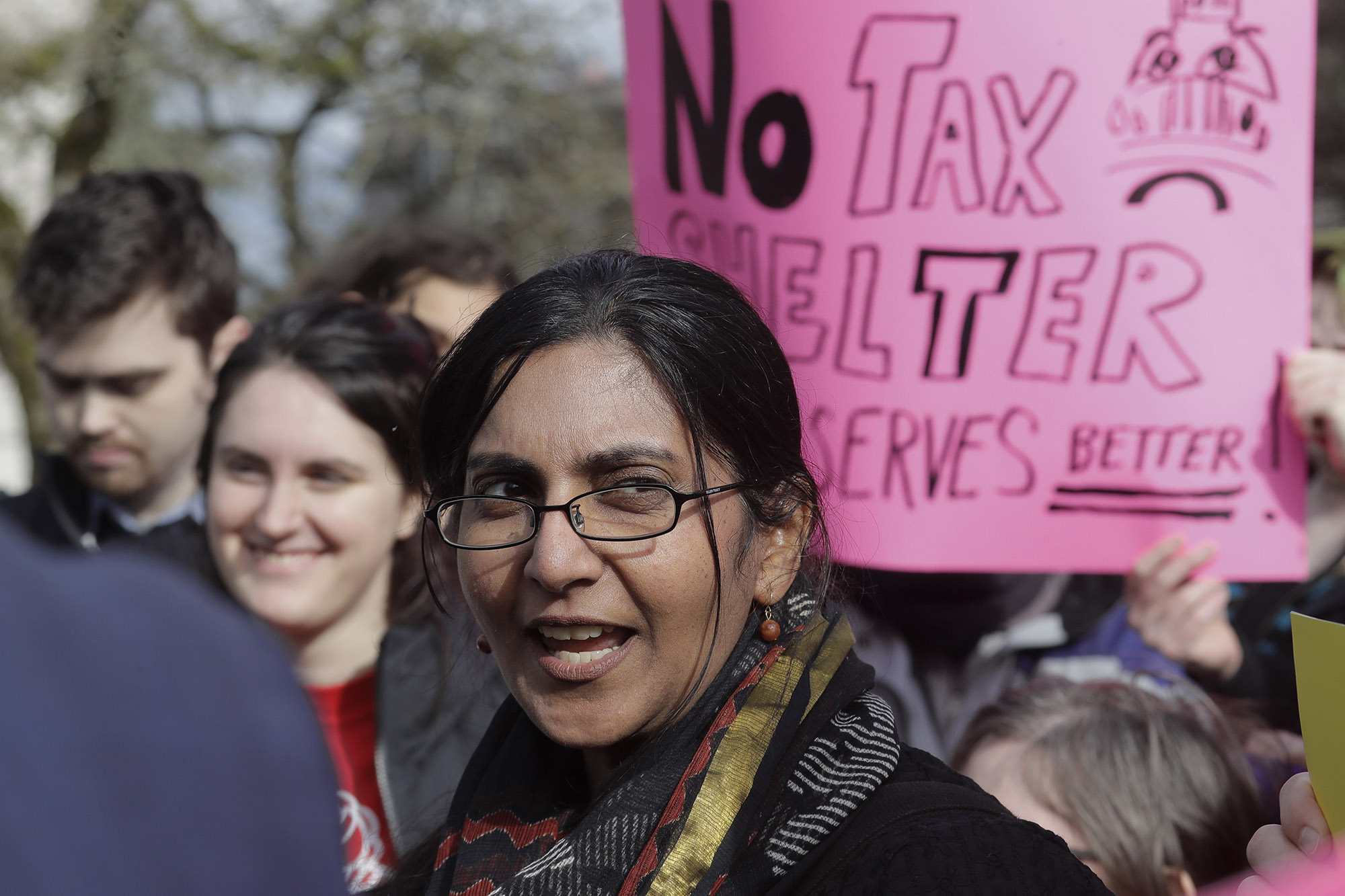 Seattle city councilmember Kshama Sawant talks about her proposal for a tax on large businesses that she says would raise $300 million to build thousands of new homes in Seattle and retrofit existing homes as she appears at a rally, in this Feb. 12, 2020 file photo. Ballots were due today, as Seattle’s third district voters decide on whether to recall Sawant. (AP Photo/Ted S. Warren)

The recall effort against Seattle City Councilmember Kshama Sawant has narrowed to a tight margin after Wednesday's voting results were released.

A larger-than-expected turnout for a December election makes it harder to predict the final results. King County reported nearly 40% of district voters had turned in ballots by Monday and officials were predicting a 50% turnout for the election.

Sawant expressed optimism she would prevail after more ballots were counted, noting that ballots have swung her way after initial vote counts in previous elections.

"While we cannot be sure of the final results, if past trends hold, it appears that working people may have prevailed in this fight," she said at an election night gathering on Capitol Hill.

The other side was just as optimistic on Tuesday night. Henry Bridger II, campaign manager and chair of the Recall Sawant campaign, said he doubted late returns would be enough for a Sawant comeback.

"I'm not worried about that. We have over 45% of the vote this early and I don't think she'll be able to overcome that," Bridger said.

The last time Sawant was on the ballot, in a 2019 city council race, challenger Egan Orion led by eight percentage points on election night, only to lose decisively in later returns. In Seattle, later returns have typically favored progressive candidates.

The special election comes a month after Seattle voters in the general election appeared to lean away from progressive candidates for the Seattle City Council and in the races for mayor and city attorney.

But Sawant, a Socialist who is a frequent speaker at protests and events for progressive causes, has beaten the establishment and her other detractors before. Sawant was first elected in 2013, ousting longtime Councilmember Richard Conlin, when all council seats were elected citywide. In 2015, the city switched to district-based elections, and Sawant defeated former Urban League CEO Pamela Banks to retain her seat. In 2019, Sawant defeated Orion, producer of Seattle’s PrideFest, whose campaign had been championed by an Amazon-backed political action committee.

All of these elections were in the national spotlight and watched closely by progressives, moderates and conservatives. They almost became a shorthand symbol and lightning rod for Seattle and its progressive politics.

Sawant has championed causes like the $15 minimum wage, rent control, defunding the police, and a city tax on Amazon and other large corporations.

The Recall Sawant campaign accused the council member of breaking her oath of office by using city funds to push for a potential 2020 ballot measure on a new Seattle tax for large corporations. She was also accused of violating outgoing Mayor Jenny Durkan’s privacy during a protest at the mayor’s house and of opening City Hall to protesters when the building was closed.

The Kshama Solidarity Campaign, which has campaigned in support of retaining Sawant, told Crosscut earlier this year that the recall campaign is part of “a nationwide right-wing backlash against Black Lives Matter” and other progressive causes.

While the 77,000 voters in Seattle’s District 3 were the only ones eligible to weigh in on Tuesday’s contest, the special election has attracted attention nationwide. Sawant received endorsements from prominent socialists such as Noam Chomsky, and the conservative website Breitbart drew attention toward the recall campaign, linking it to Sawant’s support of issues such as defunding the police.