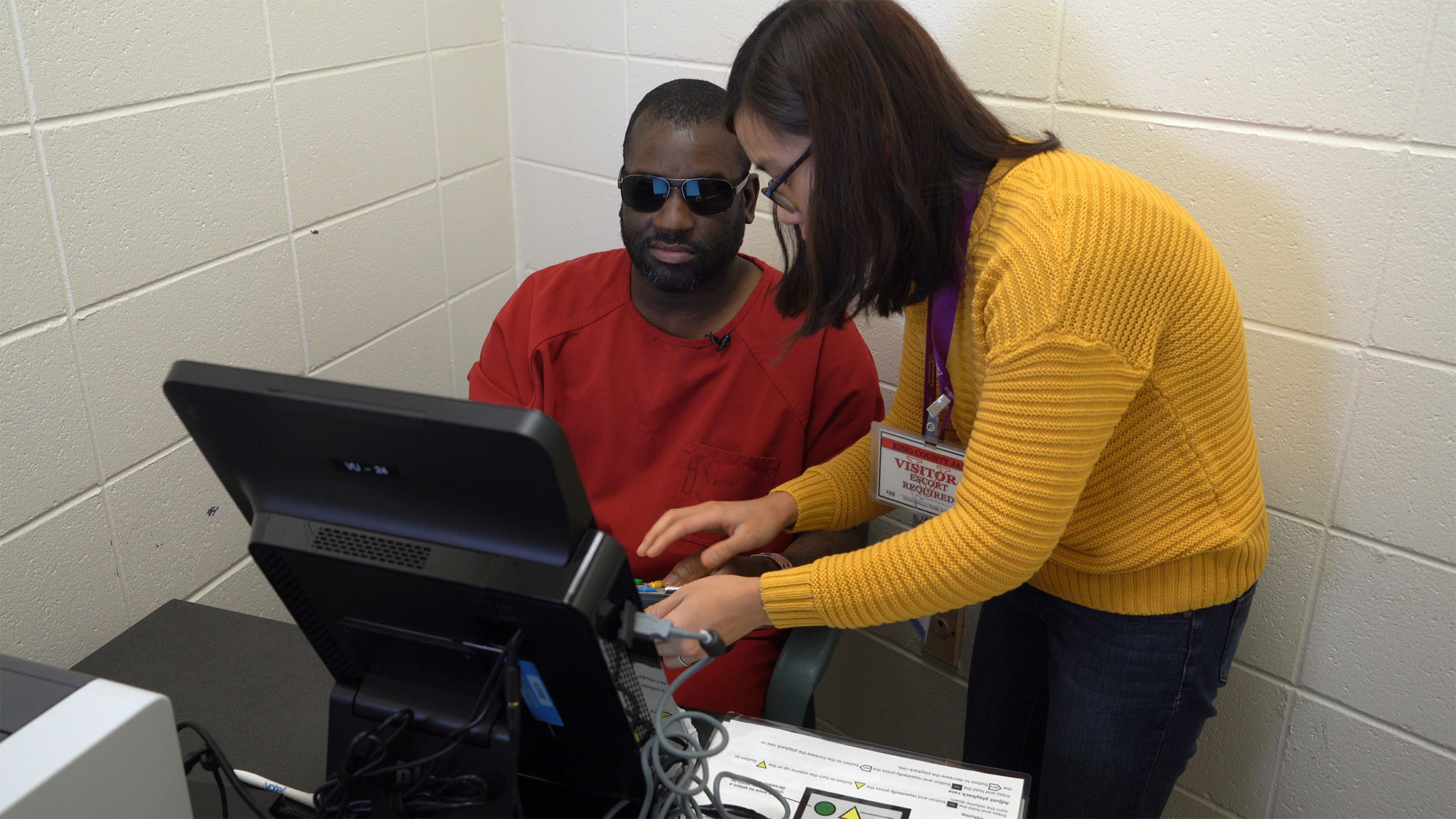 Language Services and Community Engagement Specialist at King County Elections Nhien Huynh assists Jordan Landry, who is visually impaired, as he uses an Accessible Voting Unit to cast a vote in the November 2019 election while incarcerated at King County Correctional Facility. (Courtesy of Rooted in Rights)

Election officials across Washington state may soon have extra money to break down the barriers that often prevent county jail inmates from voting.

Gov. Jay Inslee’s proposed budget for 2022 would allocate $628,000 to the Office of the Secretary of State to distribute to up to 10 county jails to help them improve voter awareness, registration and voting. Grants would be allocated in advance of this year’s August primary and November general elections. Counties that receive grants could implement their own plans for increasing voting access in their jails.

“We want all eligible persons to participate in elections and exercise their right to vote,” Charlie Boisner, communications director at the Office of the Secretary of State, wrote in an email.

For election officials in King County, improving voting access in county jails has been a high priority in recent years.

“I think jail is an area that we really need to spend more time and attention thinking about how we make sure these folks have access and can make their voice heard,” said Kendall Hodson, chief of staff of King County Elections.

King County has worked alongside nonprofits such as Disability Rights Washington to spread awareness of voting rights and assist jail inmates in the voting process. Jordan Landry, who has been awaiting trial in the King County jail since March 2019, wrote to the House Appropriations Committee to express support for the jail voting budget proposal. In the letter, Landry explained that he had been unaware that he had the right to vote while in jail, and that most facilities do not publicize this and most inmates do not know about it.

“If we truly desire to use incarceration as a tool to produce better citizens I feel that teaching inmates how to exercise their civic responsibility and how important it is to partake in our community’s sacred process of selecting leaders and laws is of critical importance,” Landry wrote. 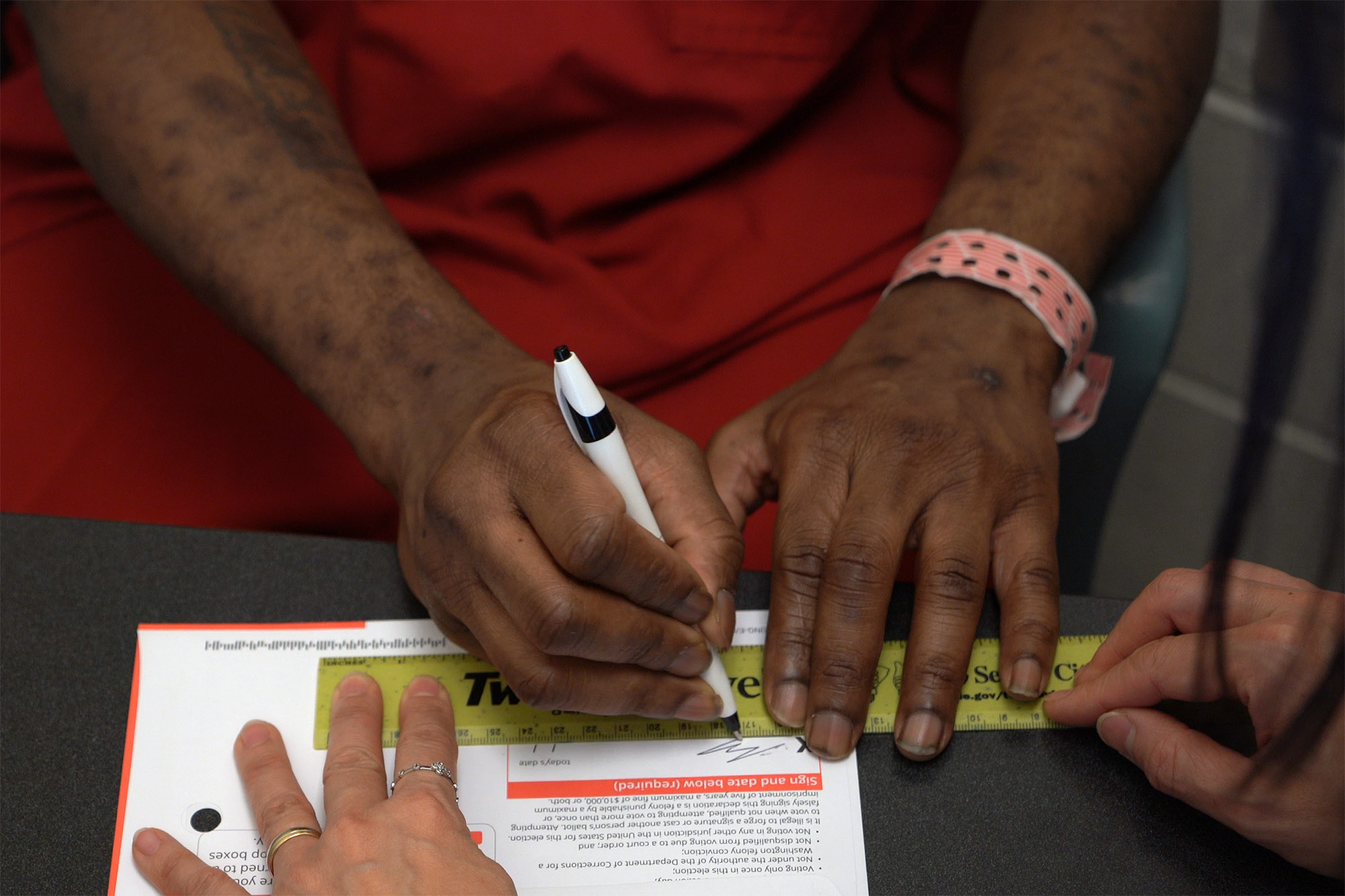 Language Services and Community Engagement Specialist at King County Elections Nhien Huynh assists Jordan Landry as he signs his ballot for the November 2019 election while incarcerated at King County Correctional Facility. Landry was previously unaware that he still had the right to vote while in jail, as most facilities do not publicize this and many inmates do not know. (Courtesy of Rooted in Rights)

Language Services and Community Engagement Specialist at King County Elections Nhien Huynh assists Jordan Landry as he signs his ballot for the November 2019 election while incarcerated at King County Correctional Facility. Landry was previously unaware that he still had the right to vote while in jail, as most facilities do not publicize this and many inmates do not know. (Courtesy of Rooted in Rights)

“Now we’re trying to tackle how we can do a better job improving access, and removing those barriers to voting for folks in jail,” said Jaime Hawk, legal strategy director at the American Civil Liberties Union of Washington.

The majority of jail inmates are in the pretrial state or awaiting sentencing, meaning they are not under complete state Department of Corrections confinement. Jail inmates have the right to vote as long as they meet the other eligibility criteria — they are a Washington state resident, a U.S. citizen and  at least 18 years old. For those convicted of a felony, their right to vote is restricted only while they are physically serving time in state or federal prison.

One of the most important factors in facilitating voting in jail is hiring dedicated staff to do outreach within jails. This means using professional election officials rather than relying on jail workers, who are typically occupied with other tasks.

Counties could also use grant money to purchase computers and printers and to set up polling stations within jails, where election officials could register voters and print out replacement ballots on the spot.

The money in the governor’s budget comes into play following the passage in the last legislative session of House Bill 1078, which automatically restored voting eligibility for those with a felony conviction “who are not in total confinement under the jurisdiction of the Department of Corrections.” The law went into effect Jan. 1.

Although jail inmates have had the right to vote before HB 1078 passed, there was still a lot of confusion among inmates, jail workers and voting rights advocates surrounding voter eligibility.

“When we would talk to public defenders, jail workers, auditors, they would say, ‘It’s really hard for us to know if someone’s eligible to vote,’ ” Hawk said.

In the past, the Legislature restricted voting eligibility for those under Department of Corrections community custody, or who had accumulated enough unpaid legal financial obligations, which no longer makes them ineligible to vote. According to Hawk, it’s difficult for auditors and jail workers to tell which inmates are under Department of Corrections community custody, complicating widespread voter access. HB 1078 clarified and simplified voting rights, removing these contingencies.

Despite the new law, misconception and confusion among inmates and formerly incarcerated people are still common.

“There’s de facto disenfranchisement because there are so many people in Washington state who still think they’re not eligible to vote,” Hawk said.

Voting rights advocates are strategizing how they believe county jails should use the grant money to increase awareness and convenience for county jail inmates.

In the grand scheme of the more than $3 billion in spending for new programs and program expansions that Inslee is proposing in his 2022 supplemental budget, half a million toward jail voting is not very significant. However, Republican legislators are skeptical about the relative importance of improving jail voting access. According to state Rep. Jenny Graham, R-Spokane, her constituents do not contact her about expanding voting access in jail.

“I have constituents that are asking me to make their communities safe again, asking why violent crime is at a 25-year high,” Graham said. “Those are the issues my constituents are concerned about.”

Graham expects the state budget to look quite different after the governor’s proposal makes it through the House and Senate. For her, the governor’s budget indicates Inslee’s priorities are incorrect with regard to serving Washingtonians.

“The governor is prioritizing people who have committed crimes,” Graham said. “I think we should be prioritizing the people who have not committed crimes. He wants to spend this money on criminals. It’s sad, because we have people in our community that that $628,000 would go a long way in helping crime survivors. Sadly, it feels as though they are being treated as second-class citizens in Washington state.”

Despite a lack of bipartisan support, voting rights advocates remain hopeful that this budget proposal will remain intact as it moves through the Legislature.

“Democracy is best when everyone is able to make their voice heard,” said Hodson at King County Elections. 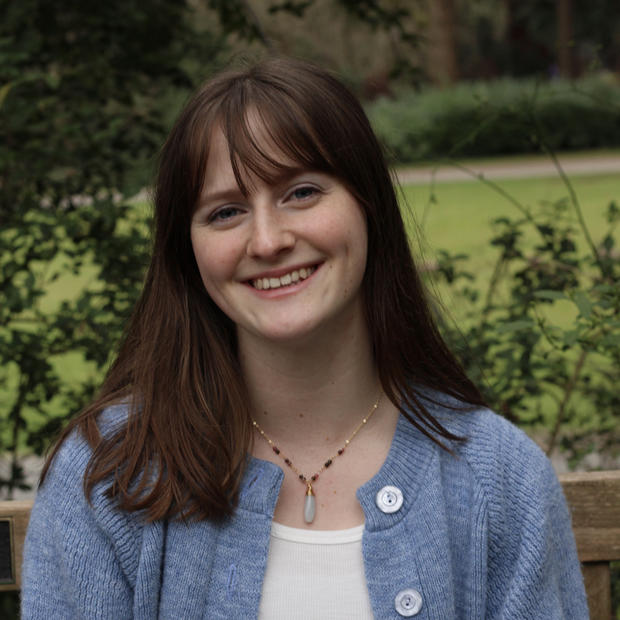