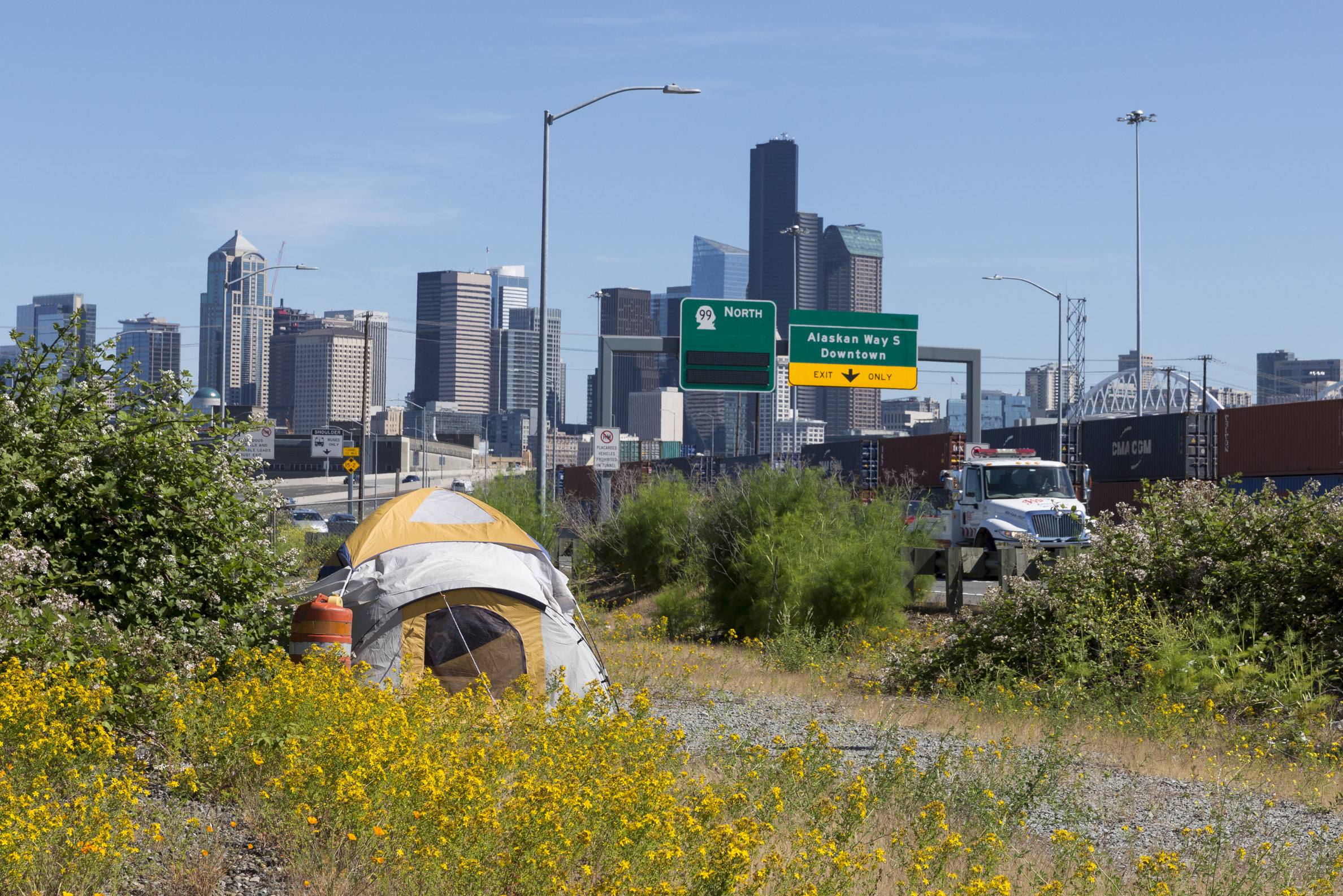 A lone tent is pitched between East Marginal Way South and Highway 99 in South Seattle in this June 11, 2019 file photo. (Paul Christian Gordon for Crosscut)

The new government agency in charge of Seattle and King County’s regional homeless response is finally up and running. But the King County Regional Homelessness Authority doesn’t plan to simply streamline business as usual. It’s bringing a new philosophical and practical approach to homeless service work that will affect everyone from the cities involved to service providers to people on the street. And that change is making some people nervous.

But some providers, like Daniel Malone at Seattle’s Downtown Emergency Service Center, are taking a wait-and-see attitude.

“We have to recognize that this is a big undertaking to launch this new entity and to take on even just the administration of a lot of different funding streams and contracts with providers,” said Malone, who is the shelter and housing nonprofit’s executive director. “That would be difficult to do in a calmer time. But this is not a calm time, both with the effects of the pandemic really dealing a series of blows, as well as the very dire state of homelessness and amount of suffering that’s going on.”

The King County Regional Homelessness Authority is meant to serve as a single clearinghouse for homeless policy and procedure around King County, rather than having overlapping agencies from each city and county government take their own approach. The authority is tasked with administering and providing oversight of the many contracts Seattle, King County and other cities in the region hold with organizations running shelters, transitional housing, street outreach and more.

This story is the result of reader-driven story ideas. Have a story idea of your own? Share it with us!

The job is big. The regional homelessness authority will also serve residents as a single point of contact on homelessness, set the metrics by which the region’s homelessness response is measured, make policy decisions and serve as the go-between for the region and the U.S. Department of Housing and Urban Development to receive federal funding.

Authority CEO Marc Dones’ theory of change puts people who’ve experienced homelessness at the table shaping policy and practices. They want to center racial justice to account for homelessness’ stark disproportionality, and attempt to take some of the politics out of the hard, on-the-ground work of helping homeless residents.

On Jan 13, the authority adopted its first, $170 million annual budget. Just under $70 million of the authority’s funding comes from the city of Seattle and $50 million from King County to maintain homelessness work already underway.

Seattle also passed along almost $40 million in one-time federal and state COVID-19 relief dollars. That money is being used to expand shelter capacity, expand safe parking options for people living in vehicles, do COVID mitigation work and continue other efforts to ease the pandemic’s impacts on the region’s homeless residents. About $11.9 million of the regional authority’s budget will be used for administrative costs. In the future, the authority hopes to get financial support from the other 38 cities in King County, as well as private and philanthropic funding.

The Seattle city and King County councils each voted to create the regional homelessness authority in December 2019, but it took until April 2021 to hire the authority’s first leader, Dones.

Because 2021 was mostly spent staffing up and because the authority joined the city and county budgeting processes when they were already in motion, the 2022 budget is largely just a continuation of the work service providers were already doing.

Giving a taste of the future, Dones had requested $27 million to target downtown homelessness from the city of Seattle during the council budget process last fall. It would have paid for a 150-bed shelter staffed with medical professionals for people with significant mental health and substance use issues. But the council turned down that request.

“We’re still in a startup year,” said Dones. “It would be destabilizing to attempt [to make significant changes immediately] so we are going to fund everything [at the same level as previous years] that currently exists in order to make sure there is no gap in service.”

Although the entity relies on Seattle and King County for funding, the regional homelessness authority CEO has a lot of autonomy and authority to shape the regional homeless strategy and set the terms of future contracts with nonprofit providers. It’s a level of power sharing that city and county leaders aren’t used to. And there are signs in the budget they are not yet fully comfortable with the idea of handing over the reins on homeless response.

In providing funding for the authority’s budget, Seattle’s mayor and city council used earmarks and a tool called a budget proviso to dictate how the authority can use some of the money. One proviso requires the authority to use $10.7 million for tiny house village operations. Another reserves $800,000 of the COVID-19 mitigation funds for services and improvements at YouthCare.

The city also earmarked some funding for specific projects, including $100,000 to expand the homeless day center at God’s Lil Acre in Lake City and $980,000 to build an additional 20 tiny houses at Camp Second Chance tiny house village in West Seattle.

The use of provisos along with the fact that Seattle funds about two-thirds of the authority’s budget prompted some concern among the authority’s implementation board, which provides policy and planning recommendations, about the city’s potential outsized influence.

“Are we independent, or do we owe the city something tacit about doing it this way or that way?” said Harold Odom at a Jan. 12 implementation board meeting. Odom is a board member and is a tiny house village resident in Georgetown. “From my point of view as on the ground, we have to not be persuaded by government officials. They’re not out there doing the hard outreach work. Hearing those voices that are so bone chilling when you’re out there and you just can’t get out of your head. Those are the people we need to be uplifting.”

Most of the homeless service providers and advocates Crosscut reached out to for this article declined to be interviewed or provide comment. Those who did respond expressed a mix of optimism about Dones and the new authority, and trepidation about the changes that might come down the line.

“I think Marc is hitting the right notes,” said Downtown Emergency Service Center’s Malone. “They’re not promising things that are not possible to be delivered. And Marc is being clear about the things that are needed that we need to focus on.”

Jon Grant is the chief strategy officer at the Low Income Housing Institute, which operates nine Seattle tiny house villages along with traditional affordable housing. He is excited about the consolidation of contracting and what that means for providers that were often duplicating their contract reporting efforts for the same work when it was funded by multiple entities. But Grant expressed some concern for Dones’ opposition to tiny house village expansion. Seattle has a goal of doubling the number of tiny house villages.

"It's unclear to us why there has been some criticism of tiny houses,” said Grant. “They are very successful and desired by people who have been chronically homeless. About 50% of people in tiny houses secure permanent housing, where the typical mat-on-a-floor congregate shelter model has a 3% success rate of finding housing.”

Dones has highlighted several priorities for transforming the regional homelessness infrastructure. For one, Dones wants to see a significant pay increase for homeless service providers. Low pay, along with extremely difficult working conditions, has led to significant turnover among shelter staff and outreach workers. That, in turn, has made it hard to expand the number of shelters Seattle and the region have.

The Seattle City Council included a 5.8% cost of living adjustment for service providers in the authority's budget. “I’m grateful for a one-time investment,” said Dones. “We need to figure out how to annualize it and figure out how to go beyond. When we look at the level of investment to raise wages in this sector to where teachers or law enforcement are, we are talking tens of millions if not hundreds of millions.”

Dones also wants to see far more people who have experienced homelessness taking prominent roles in outreach, homeless policy creation and other roles in the homeless response infrastructure. Both the authority’s implementation board and governing board include people who have been or are currently homeless. Similarly, Dones said, their work will center racial justice. The majority of people experiencing homelessness are people of color, both locally and nationally. “The disproportionality in Native and Black communities is wild and has been for years.”

When it comes to shelter and housing, Dones wants to continue moving toward using more “noncongregate” shelters that provide people more privacy and security than the traditional mat-on-floor style mass shelters. They also want to invest in more “high acuity” shelters staffed with clinical professionals to help people with the highest, most complicated needs and build more affordable housing with in-house services, such as career counseling, health care and more.

All of that will cost a lot more than the $170 million a year the authority is currently getting. “I’ve been super clear from the jump that we’re not spending enough money,” said Dones. “I did some napkin math that pencils out that our budget provides about $3,000 a year per person. Or if you divide it by days it turns into a little over $10 a day. That’s not enough money.”

Dones’ final message, as the regional homelessness authority really gets underway, is that there will be no easy fix for the region’s homelessness crisis, which is said to have been 30 years in the making.

“There’s no reaching 2024 and, yay, everything’s fixed. I believe our community has the capacity to carry the long-haul work at a political level, narrative level and level of doing the work,” Dones said. “But we have to be really clear-eyed. … It’s about the economics of homelessness, the disproportionality, the root causes. It’s about being honest about what we can or cannot do at any given moment.”