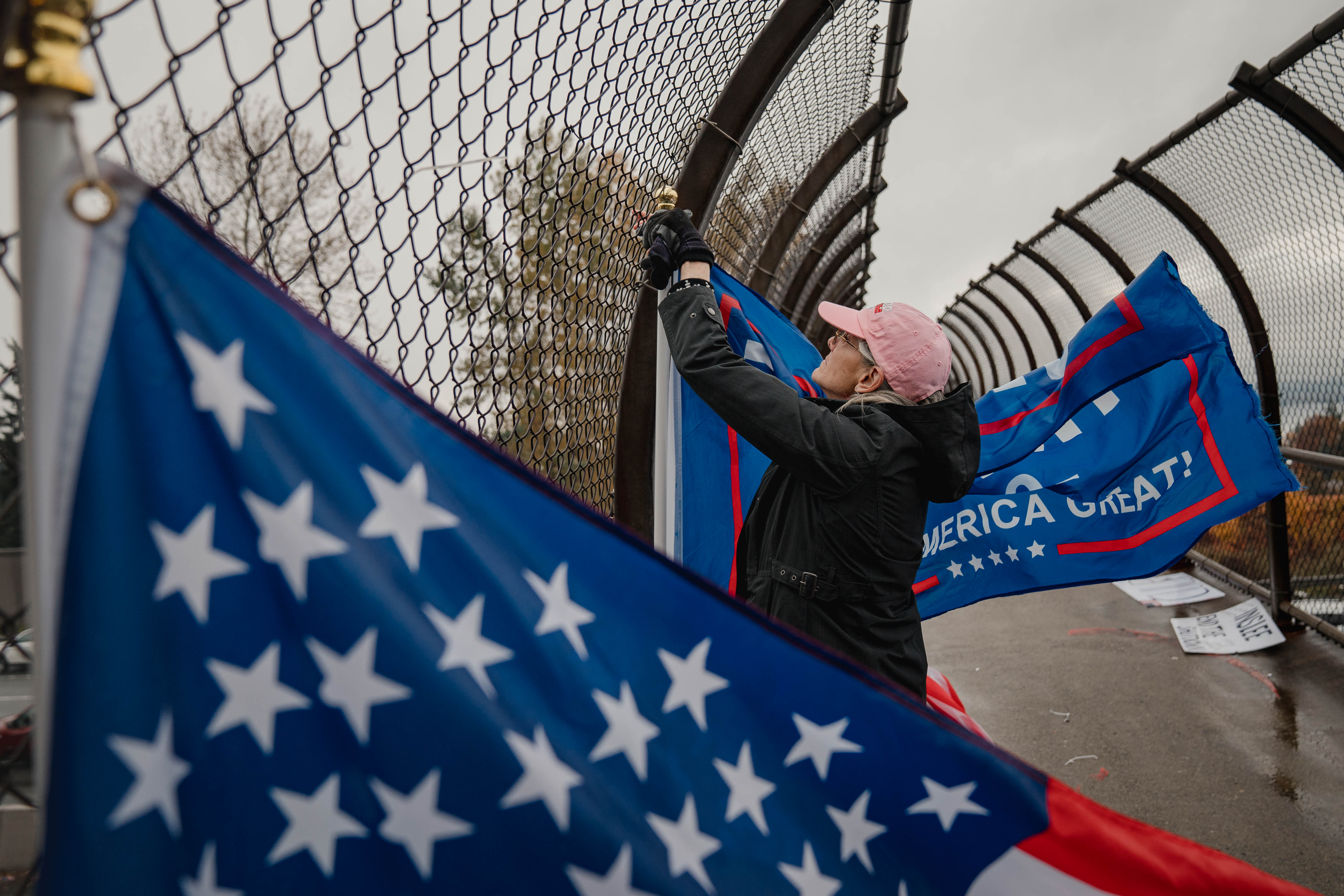 In this Nov. 3, 2020 file photo, Judy Gunn, 63, hangs up posters and flags in support of presidential candidate Donald Trump, gubernatorial candidate Loren Culp, Washington Congressional District 1 candidate Jeffrey Beeler, at the 60th Street overpass in Kirkland, Wash. “Every one of these sign and flag waving [events] represents voter encouragement. It’s mostly about voter awareness and support — that the Republican Party is alive and well,” said Gunn, who has been organizing for the Trump campaign since late 2019. (Jovelle Tamayo for Crosscut)

When the results came back for the most recent Crosscut/Elway Poll earlier this month, the party identification numbers caught my attention. The percentage of respondents who identified as Republican had jumped 10 points since last July to close the gap with Democrats, from 18 percentage points to 7. In the 30 years I have been measuring party identification in the state, it has been rare to see so large a shift.

Then a week later the Gallup Poll showed a more dramatic shift nationally: a 9-point Democratic advantage in party identification at the start of 2021 flipped to a 5-point Republican advantage by last month.

Something is going on. Party identification, while generally relatively stable, is more of an attitude than an attribute, like age or ethnicity. Here in Washington, where we don’t register by party, the proportion of voters identifying with each party varies from month to month. As such, it is seen as a kind of political baseline, like a golf handicap.

Maybe it’s a combination of these negative events, plus the stalled Congress, on one side, and the absence of Trump on the other side that makes moderates who opposed the former president feeling comfortable again to identify as Republicans.

Washington has been a reliably Democratic state for two generations. It is well-known that we have not voted for a Republican for president since 1984, governor since 1980, or for U.S. senator since 1998. In addition, Democrats have controlled the state House of Representatives for 20 years. It wasn’t always so.

The shift at the national level is not so dramatic and the causes are not so clear here in Washington. As with the national figures, there has been more movement on the Republican side than the Democratic side. The Republican rebound in our poll puts the GOP at its highest point since early in the Bush Administration. The Democrats are about where they were early in the Trump administration.

Republican identification hit bottom here in July at 18% before rebounding to 29% in the recent poll. Meanwhile, Democratic identification, which had been above 40% for most of the past two years, contracted to 36%, reducing the Democratic advantage from 18 points to 7 heading into the midterm elections.

It does not appear to be Jay Inslee’s doing. Inslee has been governor for nine years and has never enjoyed a positive approval rating. True, he got his lowest rating ever in this poll (60% “only fair” or “poor’). But his ratings are not likely to be dragging down the Democrats. It is more likely to be the other way around. Inslee came into office with less approval from his party than either of his two Democratic predecessors. Inslee’s initial approval rating among Democrats was 60%, compared with 76% for Christine Gregoire and 65% for Gary Locke. At the end of two terms, Inslee had more support from Democrats (74%) and less support from Republicans (3%) than either Gregoire (62%/15%) or Locke (61%/19%).

One poll does not make a trend. But the national Gallup data indicate that the political tide has shifted, reinforcing what national pundits have been predicting — a big election for the Republicans this year.

Of course, individual campaigns and elections matter. There will be 122 legislators, 10 members of the U.S. House and a U.S. senator elected here in November. Although no one is expecting Washington to turn Republican, our poll suggests that we are not entirely insulated from the national tide. The Democrats may be heading into this election with less of an advantage than they have had in a quite a while.