With 5 open seats representing Seattle in the Legislature and a new county prosecutor coming in, lots of interesting competition is expected. 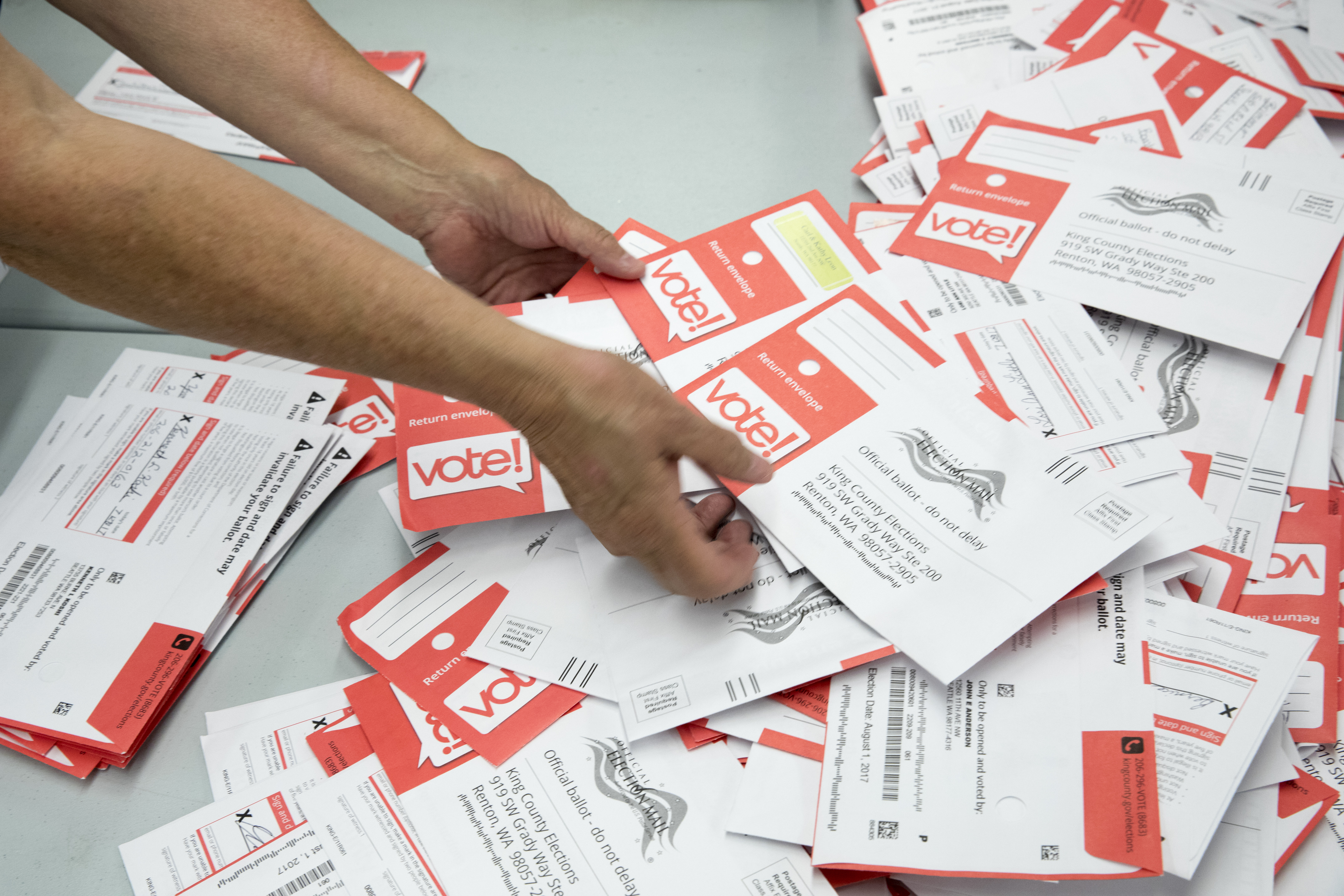 The departure of two longtime Seattle legislators, state Sens. David Frockt and Reuven Carlyle, and the retirement of King County Prosecutor Dan Satterberg, means that 2022 is shaping up to be a big year for local politics. (Matt M. McKnight/Crosscut)

Typically, Seattle’s hottest elections happen in odd years, when half the jobs at City Hall are up for bid. But 2022 is shaping up to be an unusually big year for local politics as well, with more candidates jumping in every week.

State Rep. Noel Frame, D-Seattle, announced in late January that she will run for the state Senate seat being vacated by state Sen. Reuven Carlyle, who isn’t running for re-election this year. And state Rep. Javier Valdez, also a Seattle Democrat, is running to replace David Frockt, another longtime Seattle legislator who is retiring.

That shuffling will leave two Seattle House seats open for the taking. And a third House seat is also opening up, with the retirement of longtime state Rep. Eileen Cody, D-West Seattle.

Meanwhile, three high-profile candidates are competing to succeed King County Prosecuting Attorney Dan Satterberg, who has held that job since 2007.

More people may declare their candidacy for these open positions in the coming days and weeks.

For those who are interested, but would rather not scour a dozen articles looking for this information, here’s a rundown of who is running for what in major Seattle races in 2022. We’ll update this as new candidates throw their names into the mix.

Frame, a Democrat who lives in Greenwood, is running for the Senate seat being vacated by Carlyle. The district they both represent, the 36th, includes not only Greenwood, but also Ballard, Queen Anne and Magnolia.

Frame has served in the House since 2016, spending the past two years chairing the House Finance Committee, which handles tax policy. Frame also has played a major role in several juvenile justice reform bills and measures to improve the life of children in foster care.

Before joining the Legislature, she was a progressive organizer who recruited and trained candidates to run for office.

So far, no one has filed paperwork indicating they planned to run against Frame for Carlyle’s seat, but that could change.

Valdez, a Democrat, has served in the state House since 2017. His district encompasses the Northeast neighborhoods of Lake City, Northgate, Laurelhurst, Wedgwood and Maple Leaf, as well as the suburbs of Lake Forest Park and Kenmore.

Valdez is running to replace Frockt, his Democratic seatmate, who is retiring after more than a decade in the Legislature.

In the House, Valdez chairs the State Government and Tribal Relations Committee. As a legislator, he has worked on measures to strengthen the state’s hate crime statute and collaborated with the state Attorney General’s Office on gun control legislation. Valdez also works for the city of Seattle as a senior equity and inclusion adviser.

McLeod is the cofounder and board president of Alliance for a Healthy Washington. She has lobbied for universal health care at the Legislature and also works as the director of external affairs for the state Department of Natural Resources. As part of her advocacy work, McLeod has pushed for legislation to help make health insurance more affordable on the state exchange. She also advocated for health care reforms as a board member for the Seattle-King County NAACP.

Like Valdez, McLeod is running for the open Senate seat as a Democrat.

Gross, also a Democrat, is a deputy prosecutor who works in the King County Prosecuting Attorney's office. He is a lifelong Seattleite who went to law school at the University of Washington, according to his campaign website. Crosscut has reached out to Gross to ask more about his background and experience.

With Frame running for the Senate, her seat in the state House will open up — and it’s sure to attract some attention. We'll update here as more people join the race.

Tyler Crone is a lawyer who has advised government agencies on global health issues. Most recently, she was cofounder and coordinating director of the ATHENA Network, an organization focused on advocating for the rights of women and girls in the global response to HIV. Crone, who announced her candidacy March 10, is running for the position as a Democrat. In addition to a law degree, she holds a master's in public health.

Gomez is the cofounder and board secretary of the Alliance for a Healthy Washington. She has lobbied for universal health care at the state Legislature and also pushed for other state policies to help make health care more affordable. Gomez previously handled workers compensation claims and worked as a crime victims advocate. She also is a past chair of the 36th Legislative District Democrats.

Manson is an administrative law judge who resolves people's disputes with state agencies. As a lawyer, he previously represented low-income clients who were appealing state agency decisions to terminate their benefits. At one point, he helped lobby the Legislature to let administrative law judges form a union. He serves on the executive board of the 36th Legislative District Democrats.

Reed, a Democrat, announced her candidacy for Frame's seat on Feb. 1.

Previously, Reed worked as a senior policy adviser to former Seattle Mayor Jenny Durkan and as the City of Seattle's regional affairs director. Before that, she worked for the federal government, holding positions in the State Department and the Office of Management and Budget during the Obama administration. She chairs the 36th District Democrats and now works for a consulting firm that helps businesses with workforce development and diversity, according to her campaign announcement.

While still a college student, Robert lobbied for state lawmakers to provide more money for libraries in cash-strapped counties. He has worked as the lobbyist and fundraising coordinator for the City of Hoquiam, as well as for Supreme Court Justice Steven Gonzalez, U.S. Rep. Derek Kilmer, and King County Councilmember Larry Gossett. Crosscut has contacted Robert to ask more about his background and his campaign.

Valdez’s House seat is also up for grabs, now that he is seeking Frockt’s Senate seat. Already, it’s turning out to be a crowded race. All the candidates listed below are Democrats.

Farivar is the director of public policy at the advocacy group Disability Rights Washington. There, she has focused on the Trueblood case, in which a federal judge found the state of Washington was violating people’s rights by taking too long to determine if they are competent to stand trial, leaving them languishing in county jails. That court case also concerns the state not providing mental health treatment in a timely manner.

Martinez, a technology and business consultant, is also running for Valdez’ open House seat. She is the board chair of the Latino Civic Alliance, a statewide Latino civil rights organization. She has also served on multiple statewide task forces, including the governor’s Task Force on Independent Investigations of Police Use of Force. She previously ran for the Port of Seattle commission in 2019.

Rave is a pediatrician who has also worked as the legislative committee chair of the Washington chapter of the American Association of Pediatrics. In that role, she has urged the Legislature to adopt a range of policies to help children, including banning toxic flame retardants, restricting teenagers’ access to tanning beds, raising the legal age to purchase tobacco from 18 to 21, and establishing the state's Children's Mental Health Work Group.

Taylor has been active in local Democratic Party politics and is the co-founder of Persist PAC, which has worked to elect Black women to public office. Previously, she traveled to Olympia as a parent to urge the Legislature to increase funding for K-12 education, including by enacting progressive tax measures.

Connolly is a doctor who works at the University of Washington's Harborview Medical Center. In her work at Harborview's Pioneer Square Clinic, she said she interacts daily with people experiencing homelessness, which has fueled her advocacy for finding solutions to the region's homelessness crisis. She now serves on the board of directors of the Seattle/King County Coalition on Homelessness. Previously, Connolly spent 10 years as a primary care physician at Virginia Mason.

This is the seat being vacated by state Rep. Eileen Cody, who plans to retire from the Legislature after serving for 28 years.

Griffin is a certificated school librarian who has spent the past eight years advocating for sexual assault survivors at the state and federal levels. After she was raped in 2014, she served on the state's Sexual Assault Forensic Examination (SAFE) Task Force, which examined the state's backlog of untested rape kits and suggested policy solutions. Since then, Griffin has pushed the Legislature to pass new laws to better track rape kits, treat rape survivors with more compassion, and ensure untested rape kits get submitted for processing. At the federal level, she has worked with U.S. Sen. Patty Murray and U.S. Rep. Pramila Jayapal on legislation to try to increase access to sexual assault nurse examiners at hospitals.

Dembowski has served on the King County Council since 2013. On the council, he has pushed for criminal justice reform and ending juvenile solitary confinement. He is a lawyer who previously worked in private practice at the firm Foster Pepper, now known as Foster Garvey.

While the position of county prosecuting attorney is nonpartisan, Dembowski identifies as a Democrat.

Ferrell has been the Federal Way mayor since 2014. Before that, he spent a decade on the Federal Way City Council and served as a King County deputy prosecuting attorney, including supervising the county’s domestic violence court. Ferrell, too, identifies as a Democrat.

Manion has been the chief of staff in the Prosecuting Attorney's Office for 15 years. Before that, she spent seven years as the prosecutor’s deputy chief of staff and four years as a deputy prosecuting attorney. She played a large role in establishing the prosecuting attorney’s elder abuse program, according to the state Attorney General’s Office, and serves on the board of the Alliance for Gun Responsibility and the Urban League of Metropolitan Seattle. Like other candidates in the race, Manion is a Democrat.

Thomas is a former King County senior deputy prosecuting attorney. At the prosecutor's office, he also served as director of community justice initiatives, working to expand the county's use of restorative justice programs. Thomas later worked for the national organization Prosecutor Impact, a prosecutor training organization. As the group's director of strategy, he advocated for criminal justice reform at the national level. He now is an adjunct professor at the Seattle University School of Law.

Bonus: A look at the suburbs

Meanwhile, independent candidate Chris Vance is challenging state Sen. Phil Fortunato, R-Auburn, in the 31st Legislative District, which includes south King and northeast Pierce counties. Vance, a former chair of the state Republican Party, broke with the GOP because he disagreed with the party's direction under former President Donald Trump. Fortunato, by contrast, is one of the Senate's most right-tilting members, known for over-the-top floor speeches and sometimes filing bills to poke fun at liberals.