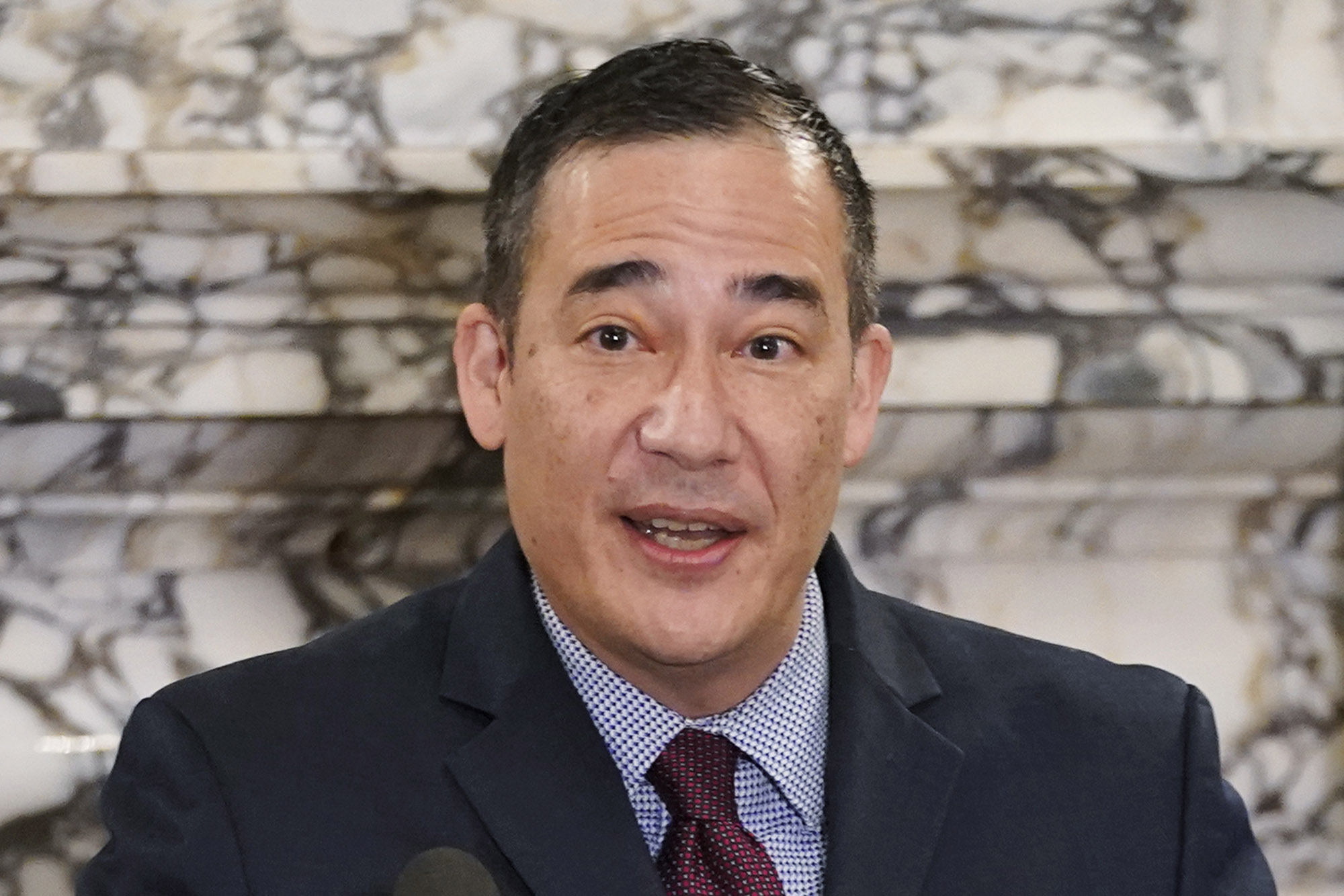 Steve Hobbs speaks after he was sworn in as Washington Secretary of State, Monday, Nov. 22, 2021, at the Capitol in Olympia, Wash. Hobbs, a former state Senator from Lake Stevens, Wash. is the first person of color to head the office and the first Democrat to serve as Secretary in more than 50 years. He replaces Republican Secretary of State Kim Wyman, who resigned to accept an election security job in the Biden administration. (AP Photo/Ted S. Warren)

But Steve Hobbs, the first Democrat to serve as Washington’s secretary of state in nearly 60 years, said he shares the governor’s frustration with people who spread election misinformation and plans to make combating those falsehoods a key focus of his office.

In a 40-minute interview with Crosscut on Tuesday, Hobbs said his office wants to expand the election cybersecurity office created by his Republican predecessor, Kim Wyman, who left in November to take a job in the Biden administration.

Hobbs, a former state senator from Lake Stevens, also wants the Office of the Secretary of State to play an increasingly proactive role in stamping out election-related misinformation and disinformation on social media.

“What we will do is lean forward — as we say in the military, ‘lean forward in the saddle’ — instead of sitting back and allowing a tweet to become a retweet, [then] becoming a meme, and, all of a sudden, people believe in a false narrative of the elections,” said Hobbs, who also is a lieutenant colonel in the Washington National Guard.

Tuesday’s interview, which Crosscut livestreamed as part of its Northwest Newsmakers series, was one of the first times Hobbs has spoken at length about how he plans to run the Secretary of State’s Office, which oversees the state archives, as well as elections and corporate registration. Inslee, a fellow Democrat, appointed Hobbs to the job in November when Wyman took on her new role in Washington, D.C.

Hobbs said his office isn’t taking a stance right now on Inslee’s proposal to criminally charge public officials who spread election misinformation. That proposal, introduced in the Legislature last week as Senate Bill 5843, would charge elected officials and political candidates with a gross misdemeanor if they knowingly spread false information about the election process in a manner that provokes “imminent lawless action,” such as the riot that occurred at the U.S. Capitol on Jan. 6, 2021.

If passed, the bill would also ensure that any sitting elected officials convicted of this new crime would be removed from office.

Hobbs said his office isn’t weighing in right now partly because the measure is so new and partly because of constitutional questions. The state Supreme Court previously struck down a state law that made it illegal for politicians to lie about their opponents, saying the law violated candidates' First Amendment rights to free speech.

“I don't even know if it's constitutional or unconstitutional,” Hobbs said of Inslee’s new proposal, which aims to stop election misinformation. “We'll see what happens in the process.”

The governor, for his part, has argued that his proposal passes constitutional muster because it wouldn’t criminalize all speech that undermines elections, just speech that incites a riot or other lawlessness.

Hobbs said he, too, gets frustrated with other politicians who question the security of Washington’s vote-by-mail election system, which for many years has served as a national model.

That frustration came through when Hobbs shared his thoughts on three Washington legislators who traveled last summer to an event held by MyPillow CEO Mike Lindell, who claimed without evidence that hackers stole the 2020 presidential election from Donald Trump.

“Here you actually have legislators that don’t know what we do in this state and how secure our election system here is in this state,” Hobbs said. “We have logic tests — there are audits. … And perhaps they don’t know that.”

He added, “It is frustrating when you have elected officials trying to propose bills that do away with mail-in voting, and somehow think that we can process millions of ballots in a single day.” Hobbs said that’s a recipe for “long lines and voter suppression — and that’s what we don’t want to do.”

Hobbs, who described himself as a centrist Democrat, said he doesn’t think the voting rights bills being debated at the federal level will have much of an effect on Washington state, which has already enacted many of the reforms contained in the federal bills.

Still, he said he wants to see the federal measures pass so that voters in other states can have equal access to the ballot box.

At the same time, as a former state senator from a swing district, Hobbs said he understands how more conservative Democrats — such as West Virginia Sen. Joe Manchin — feel compelled to vote conservatively on issues such as the voting rights legislation.

“I know [Democrats] are upset with Joe Manchin — I'm upset with him on some of these issues,” Hobbs said. “But guess what? He represents West Virginia. It's a pretty conservative state.”

Hobbs' appointment as secretary of state is temporary; he plans to run for election this November. If Hobbs wins, he will serve the remainder of Wyman’s term, which runs through 2024.

Already, four people have announced they plan to run against Hobbs, including Republican state Sen. Keith Wagoner and Pierce County Auditor Julie Anderson. Anderson has said she plans to run as a nonpartisan candidate.