The vote comes after an analysis found that enforcement disproportionately targeted homeless people and people of color. 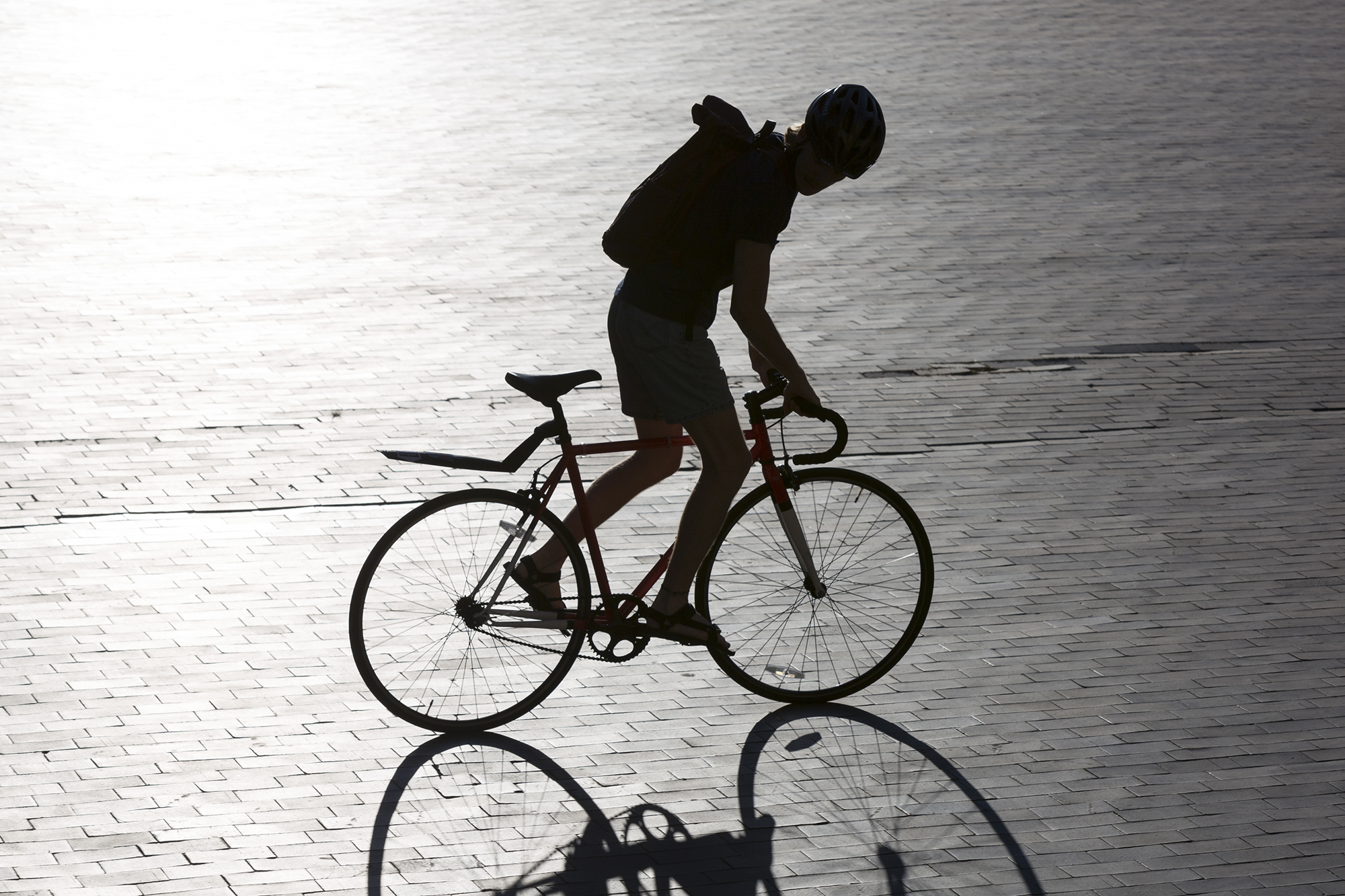 A bicyclist in silhouette passes through Red Square at the University of Washington on June 11, 2019. (Paul Christian Gordon for Crosscut)

The King County Board of Health voted 11-2 Thursday to repeal a law requiring every bicyclist to wear a helmet.

The repeal is not a refutation of how helmet wearing improves safety. Instead it reflects a growing understanding among Board of Health members and bicycle advocates that the helmet law has been inequitably enforced, with a disproportionate number of citations going to homeless people and people of color.

“Helmets keep people safe and prevent traumatic brain injury — this is indeed scientifically beyond dispute,” said King County Councimember Girmay Zahilay, who is also a member of the Board of Health, “That is not the question before us. The question is whether a helmet law that is enforced by police, on balance, produces [positive] results that outweigh the harms the law creates.”

King County Councilmember Joe McDermott, who also serves on the Board of Health, said in an interview with Crosscut that the board’s conversations about repealing the law began after a December 2020 Crosscut investigation of helmet citations. The analysis found that at least 43% of the people who received helmet tickets in King County since 2017 were homeless. Between 2019 and 2020, that number increased to 60%.

Another analysis, by Seattle Neighborhood Greenways, an advocacy group, found that Black bicyclists were cited for not wearing helmets at nearly four times the rate of white bicyclists.

The repeal has garnered support from the Cascade Bicycle Club, a large and influential Seattle-based club and advocacy organization. Cascade helped lobby for the passage of the county helmet law in 1993. Advocates from Transportation Choices Coalition, Seattle Neighborhood Greenways, Real Change and King County NAACP also spoke in favor of the repeal at Thursday’s Board of Health meeting.

“Cascade is pro-helmet use,” said Executive Director Lee Lambert in an interview. “But we are not supportive of maintaining the helmet law because of the negative impacts it has on our unhoused neighbors and communities of color.”

Instead, Cascade wants to see an increase in bicycle safety education programs and low-cost and free helmet distribution to ensure people have equitable access to helmets. Cascade does bike safety programs in every elementary school in Seattle and sells youth and adult helmets for $10. Bike Works, a nonprofit in the Columbia City neighborhood, similarly does bike safety education with children and holds helmet giveaways for children.

The repeal drew significant opposition from board and staff members of the Brain Injury Alliance of Washington and a slew of doctors and medical professionals at Harborview, University of Washington and Seattle Children’s Hospital.

Opponents of the repeal spoke about the undisputed effectiveness of bicycle helmets in preventing traumatic brain injuries and expressed fear that a repeal would lead to an uptick in injuries and deaths. Many asked the board to maintain the helmet law while focusing on ways to improve equitable enforcement of the law or, at the very least, delay the repeal until the county conducted a more thorough analysis of its impacts.

After Thursday's helmet law repeal, the Board of Health voted 13-0 to adopt a resolution affirming its support for using helmets while on bikes, scooters, skateboards and other wheeled devices. It also affirmed the increase in safety from head injuries helmets provide and encouraged the King County Council to fund a public outreach and education campaign about helmet use.

In the 1990s, when King County created its helmet law, very few bicyclists wore helmets.  Now helmet use is much more prevalent. In 2019, Seattle police wrote just 118 tickets, despite record levels of ridership. The fine is $30, but can rise to $154 with court fees. In January of 2022, the Seattle Police Department announced it would no longer enforce several low-level traffic violations, including not wearing a helmet.

Lambert said a shift in culture and education about helmet use will ultimately have a more significant impact than the county’s law. He points to Portland, where the helmet law applies only to kids 16 and younger. But upwards of 80% of Portland bicyclists wear helmets, according to city data.

Even more than helmet use, Lambert said, the biggest safety improvement Seattle and King County could make for bike riders is building out its network of bike lanes and paths that are physically separated from car traffic.

King County Councilmember Jean Kohl-Welles, also a Board of Health member, was the lone member opposing the repeal (county council member's votes count for two votes on the Board of Health). She said she was torn between the harms the helmet law creates for homeless residents and communities of color and the potential that repealing the law would lead to less helmet use.

“I cannot support a full repeal of this law,” said Kohl-Welles. “My fear is we will send a very unfortunate and powerful signal to the public that helmets are not necessary and we will see an increase in injuries and likely fatalities for all demographic groups.”

The Board of Health resolution encourages other jurisdictions to repeal their helmet laws.

Correction: A previous version of this story said the repeal does not take effect for 30 days. It takes effect immediately.