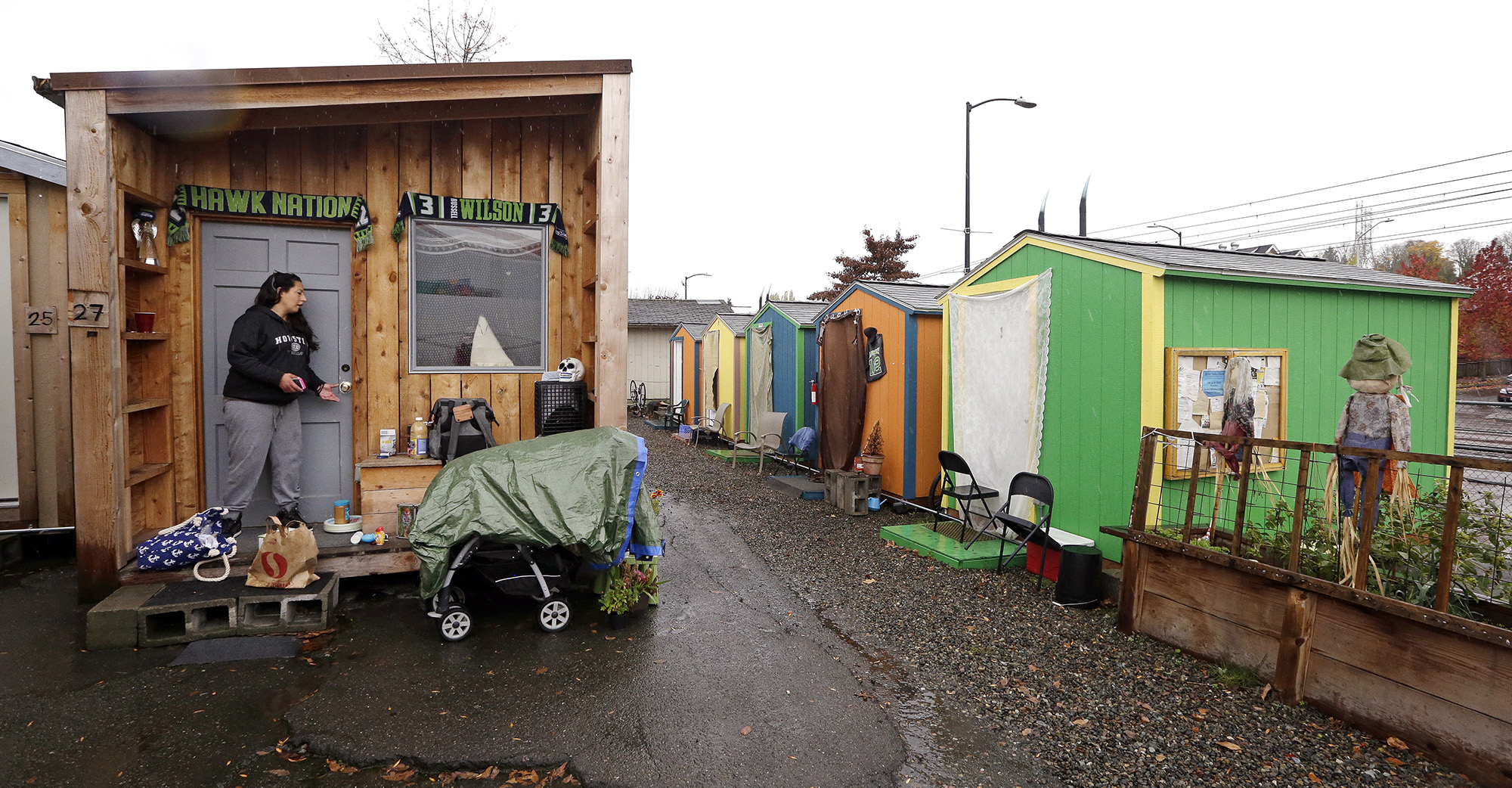 In this Nov. 9, 2017, file photo, Eva Stough opens the door to her tiny house, where she lives with her partner and baby, at a homeless encampment in Seattle. Politicians and advocates have been scrambling to keep up with the surge of unsheltered residents in the state. One answer in Seattle has been the so-called tiny houses, portable 120-square-foot structures of simple wood construction. Sen. Joe Nguyen has authored a bill that would exempt temporary homeless shelters from the State Environmental Policy Act (SEPA) process and the potential for NIMBYs using the tool to block construction of tiny house villages. (AP Photo/Elaine Thompson)

In early December 2021, the city of Seattle cleared the last remaining residents from an unauthorized homeless encampment in Ballard Commons Park. Many of the residents moved to Rosie’s Village, a new tiny home community in the University District built as part of the effort to get campers out of the park.

Planning for Rosie’s Village got underway in early spring 2021. According to the Low Income Housing Institute, the organization that operates Rosie’s Village, tiny house villages should take about 10 weeks to plan and construct. But Rosie’s didn’t open until November because of a monthslong environmental review called the State Environmental Policy Act, or SEPA, that tiny home villages must undergo. State Sen. Joe Nguyen, a Democrat from West Seattle, hopes to change that this year.

“If the Legislature had passed Sen. Nguyen’s bill last year, we could’ve cleared Ballard Commons in July or August instead of November,” said Seattle City Councilmember Andrew Lewis. “Everything gets slowed down by the tedious and unnecessary environmental review process. We’re talking four to six months of delay really for no legitimate reason.”

Nguyen’s bill would exempt tiny house villages from SEPA review when they are located in communities that have declared a homelessness state of emergency, which includes Seattle, Tacoma, Olympia, King County and Thurston County. The bill passed the Senate 41-8 on Feb. 8 and now must make its way through the House.

To qualify for the exemption, tiny home villages must be used for people experiencing homelessness, have no more than 200 beds, exist for no more than five years and include no permanent structures — tiny homes are, after all, meant to be stopgap measures, not permanent housing. The villages must also comply with local water quality and erosion regulations, have a solid waste and medical waste mitigation plan and form a community advisory committee to provide input on village operations and address any complaints that arise from neighbors

“The homelessness crisis is getting worse,” said Nguyen. “In lieu of having supportive housing and affordable housing preservation, we need some sort of stopgap. Tiny homes are not the answer to homelessness. But we need something to get people stable in safe places and off of our streets and tiny homes work.”

SEPA requires governments and private companies to evaluate the impact of new construction projects — from apartment buildings and grocery stores to highway expansions and new wastewater treatment plants. The project proposer must go through a lengthy checklist of potential environmental impacts on the natural world, including air, water, plants, noise and light. SEPA also evaluates impact to the built environment such as utilities, transportation, parking and aesthetics.

“The end goal is how you get folks out of unsafe spaces that hurt our environment currently,” said Nguyen, referring to unauthorized encampments. “It helps to have them in tiny homes that are regulated. … It’s an emergency and in those cases I think it’s OK to circumvent reviews like SEPA.”

The Low Income Housing Institute, which fully supports Nguyen’s bill, points out that tiny home villages are typically built on underutilized or vacant parking lots or fields and don’t have a permanent impact.

Because the villages are built as temporary installations, LIHI said, it’s easy to remove them and revert the land to its original use. “This is not a permanent multifamily building that has a multigeneration impact that needs to be analyzed [through SEPA],” said LIHI’s tiny house project manager Brad Gerber. “For Rosie’s Village we barely penetrated the ground. It was an existing parking lot that we just put homes on top of.”

The multimonth review process isn’t the only problem SEPA can cause for tiny house villages. SEPA allows citizens to file an appeal arguing that the initial environmental analysis was insufficient. Even if a hearing examiner ultimately rejects the appeal, it can add months and even years of delay. SEPA appeals are commonly used to delay new affordable housing projects, bike lanes and many other types of development.

According to LIHI, a SEPA appeal delayed the expansion of a tiny house village in Interbay. As a result, said Gerber, “everyone living in the village had to use honey buckets and a gray water sink instead of having running water, hot showers and bathrooms as planned” during the delay.

In Bellingham, delays from SEPA appeals almost killed the Gardenview Village tiny house community LIHI was trying to open. “We didn’t know if there was an end in sight for the appeals process.” In addition to Rosie’s Village, LIHI operates 15 tiny house communities in Seattle, Tacoma, Olympia and Bellingham.

Nguyen has introduced his SEPA bill several years in a row without success. Last year, the bill passed out of the Senate, but did not pass in the House. This year’s Senate version was opposed only by seven Republicans and one Democrat.

During a press conference in early February, state Sen. Mike Braun, a Republican representing southwest Washington, said that though he had some reservations about SEPA in general, he was skeptical about exempting tiny houses. Braun was one of the bill’s eight nay votes.

“Why would we exempt one kind of development from all the others?” Braun asked in the press conference. He argued that SEPA is a “simple process” that helps all parties involved in development better understand environmental impact and therefore worth keeping in place.

Nguyen is hopeful that because the homelessness crisis continues to get worse, his bill might not hit the same roadblocks this session that it has in previous years.

“The need is more clear now than it was before,” said Nguyen. “The nuances of how to address homelessness has always been up for debate. But homelessness is so prevalent even folks on the fence and, dare I say, NIMBYish [not in my backyard] see the impacts in their communities now.”

Councilmember Lewis sees the bill as an effort to treat declarations of a homeless state of emergency as an actual emergency.

“Homelessness is a huge, crushing humanitarian emergency,” said Lewis. “I don’t think it’s really factored with people that we’re facing the same thing as if we had been hit by an earthquake or tornado. We have an urban refugee crisis. … We need to pass the bill so we have the tools to respond quickly and sufficiently.”