WA redistricting panel admits it broke the law. What now?

A settlement will allow new congressional and legislative maps to stand, but the commission must make changes going forward. 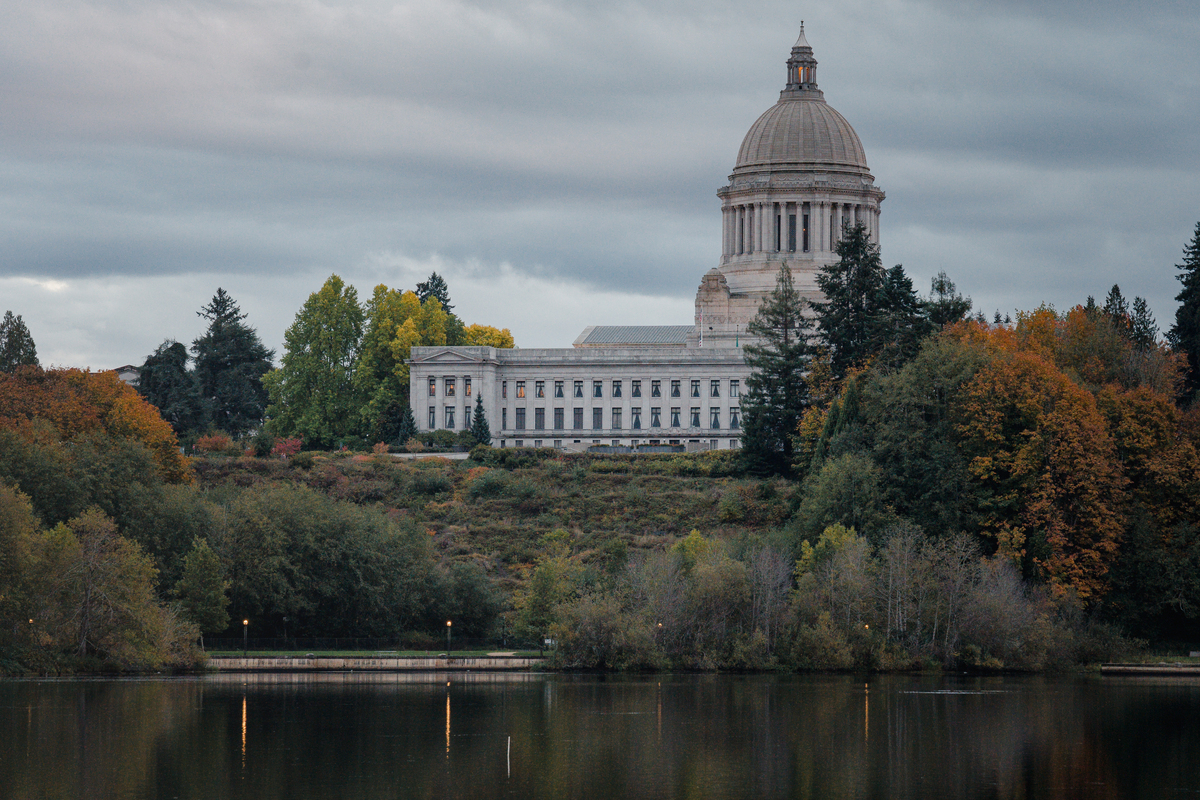 The Washington State Capitol and Supreme Court buildings, photographed from Heritage Park on Oct. 21, 2020, in Olympia. (Jovelle Tamayo for Crosscut)

The commission in charge of redrawing Washington state’s political district boundaries has admitted that it broke the law last year by conducting its negotiations in secret.

A settlement agreement, which Washington’s Redistricting Commission voted to approve on Wednesday, concedes that the commission members violated the state’s Open Public Meetings Act last November by approving new congressional and legislative district maps with little to no public deliberation.

The settlement resolves two open-meetings lawsuits filed against the five-member commission, a body that meets every 10 years after the U.S. census to decide how to redraw the state’s political districts.

As part of Wednesday’s settlement, the Redistricting Commission agreed to adopt new rules that aim to prevent a repeat of last year’s opaque, closed-door mapmaking process. Those rule changes will include a ban on commission members retreating into private sessions to negotiate district boundaries, something they did repeatedly last November in the hours before their final deadline to approve new redistricting maps.

At the same time, the settlement ensures that the new political maps approved by the commission won’t be overturned in court because of open-meetings violations.

That means the new districts decided on by the commission are almost certain to be in effect for the November 2022 midterm elections — a huge relief for politicians who are trying to run for reelection this fall, as well as those seeking public office for the first time.

“We concluded the Supreme Court and Legislature had no interest in invalidating the plan and maps so close to the 2022 elections,” said Mike Fancher, president of the Washington Coalition for Open Government, in a news release Wednesday. The nonprofit government watchdog group, which filed one of the lawsuits accusing the commissioners of secret deal-making, had originally sought to get the maps invalidated over the public-meetings act violations.

“We took no position on maps, but pursued an outcome that ensures this commission and future commissions will not repeat the same mistakes,” Fancher said in Wednesday’s news release. “We feel this outcome achieved that aim.”

The settlement, which must be affirmed by a Thurston County Superior Court judge, also requires the five members of the commission to pay $500 each in penalties, as well as to cover the open-government group’s legal costs, which total about $120,000.
The commission separately agreed to pay citizen activist Arthur West, the plaintiff in a second open-meetings lawsuit, $15,000 to drop his claim.

The Redistricting Commission consists of four voting members, one appointed by each of the Legislature’s four political caucuses, plus a nonvoting chair.

The Redistricting Commission’s decisions have deep ramifications, determining who can run for office in a given district, which party has an advantage and whether communities of color end up split between districts, diluting their voting power.

Both of the open-meetings lawsuits filed against the commission focused on the commission’s meeting of Nov. 15, 2021. That was the deadline for the commission to approve a plan for new congressional and legislative district maps..

During a five-hour meeting that evening, the commissioners retreated into private sessions, emerging a few minutes before their midnight deadline to vote on an agreement they didn’t discuss or share in public.

Commissioners over the following days said they had come to an agreement in private on a “framework” for a deal, but did not have finalized maps at the time of the vote. Nor was that “framework” documented in writing. While the commissioners conceded they blew their deadline, the state Supreme Court subsequently said that it would accept the commission’s work and not take over the redistricting process, which normally would be the next step outlined in the state constitution.

Later on, legislative staffers said commission members were making decisions on map boundaries after the midnight Nov. 15 deadline, outside of any public meeting. The state’s Open Public Meetings Act, which applies to the Redistricting Commission the same way it applies to city councils, requires a legislative body’s decisions and deliberations to occur in public.

The commissioners also broke the law by taking actions after their meeting adjourned, such as deciding when to post final maps to the commission website, the settlement said.

A press release from the commission said the violations were not intentional. The four voting commissioners — Joe Fain, Paul Graves, April Sims and Brady Walkinshaw — did not provide additional information when asked for comment Thursday.

As part of the settlement, the commission agreed to change its practices going forward so that similar violations are less likely to take place during the state’s next redistricting process, in 2031.

For one, the commission members — present and future — will have to go through more thorough open government training.
And, going forward, the commission will not be allowed “to convene a public meeting and then recess to enable commissioners to deliberate among themselves,” according to the settlement. Exceptions will be allowed only for specific reasons already allowed in the open-meetings law, such as to discuss pending litigation or personnel matters.

Voting in private and negotiating a deal in private, as the commission did in 2021, won’t be allowed.

What’s more, the commissioners will have to make their final redistricting plan public before they vote on it.  And that final plan will need to include actual district maps, along with detailed descriptions of which census blocks and tracts fall into which district.

That means no more voting on a vague, unwritten framework of a deal

Some of those reforms echo those sought by state legislators this year. A bill that cleared the state Senate earlier this month, Senate Bill 5560, similarly would require the commission’s final redistricting plan to include completed district maps. But the legislation would go even further by requiring final district map proposals to be made publicly available 72 hours before a final vote.

State Sen. Jamie Pedersen, a Seattle Democrat who sponsored the measure, wrote in a text message Thursday that passing his bill remains important despite the settlement, because the reforms his bill would require "are more specific."

Earlier this month, the Legislature approved the maps submitted by the Redistricting Commission with only minor changes.

That means those maps are most likely the ones the state will use for the next decade.

The boundaries of legislative districts could end up changing if a court rules the lines violate the federal Voting Rights Act, as another lawsuit alleges. But it is unlikely that both the congressional map and legislative map will be thrown out in their entirety, as the open-meetings lawsuits originally sought.