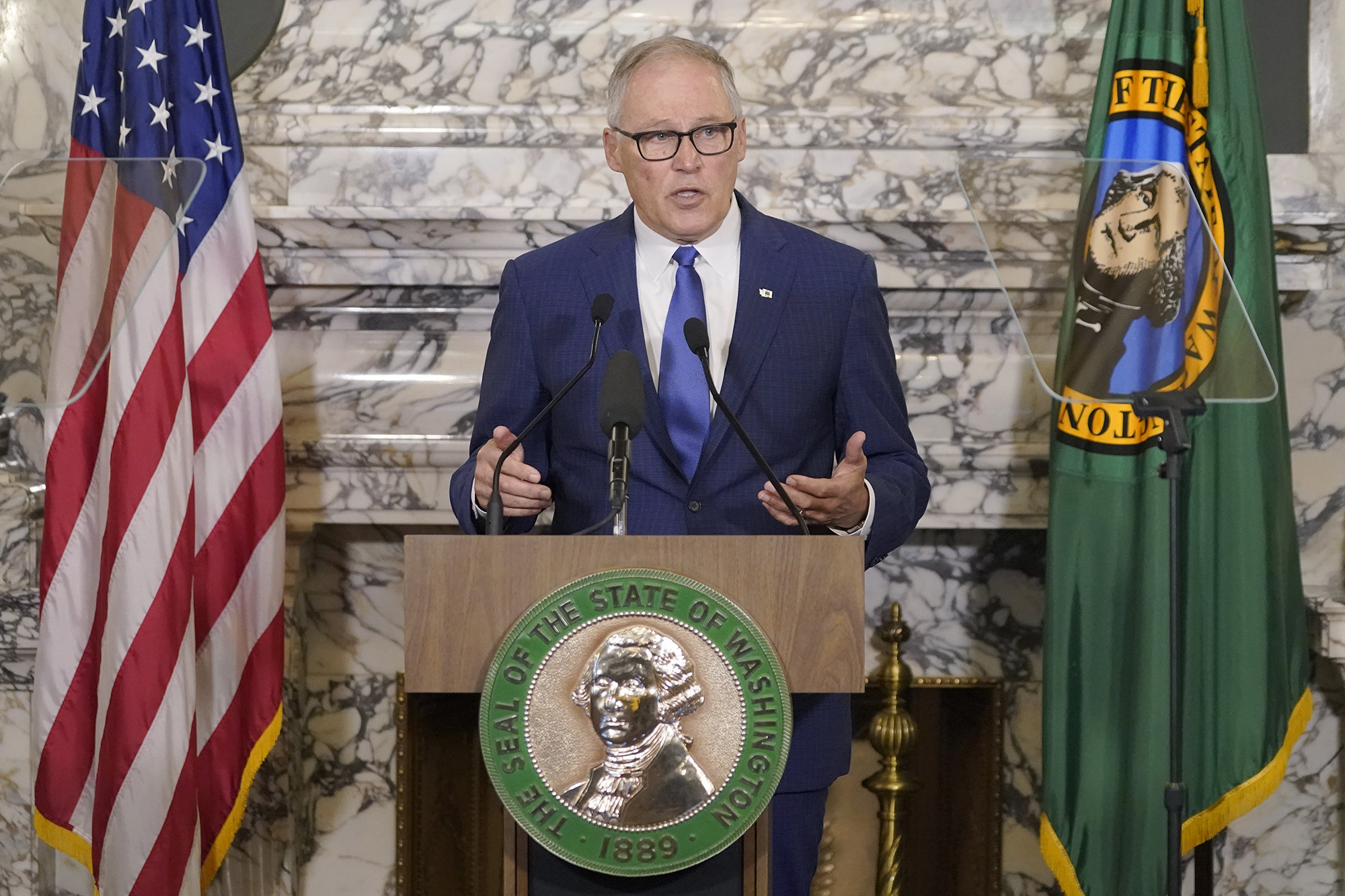 Washington Gov. Jay Inslee speaks as he gives his annual State of the State address, Jan. 11, 2022, at the Capitol in Olympia. On Feb. 17, Inslee announced the state will end its indoor masking requirements in most settings starting March 21. (Ted S. Warren/AP)

This story has an important update: the indoor mask requirement in Washington state is now lifting earlier, on March 12. Read more here.

Starting March 21, Washington residents and schoolchildren will no longer be required to mask up when indoors.

Gov. Jay Inslee announced Thursday that the state’s indoor mask mandate will be lifted in a little more than a month. The sunsetting of the mask requirement will apply to most public indoor spaces, including schools, child care facilities, restaurants, bars, churches, gyms and grocery stores.

Masks will continue to be required in most public indoor spaces until March 21. And private businesses can also continue to ask their customers to wear masks as a condition of entry, even after the statewide mandate lifts.

Even after March 21, masks will still be required in health care settings, such as hospitals and nursing homes, as well as on public transit, school buses, and when using taxis and ride-hailing services.

Local health jurisdictions can also impose their own local mandates that are stricter than the state’s.

Other states have similarly announced ends to their mask mandates in recent weeks.

However, he said, “That would not be consistent with where the science is right now.”

“It would not be safe to do this today,” Inslee said Feb. 17, citing hospitalization rates that remain higher than at many earlier points in the pandemic.

While some states like California, New Jersey and New York have let their indoor mask mandates expire earlier, Inslee said last week that those states had experienced an earlier rise in cases, fueled by the omicron variant of COVID-19. Washington’s wave of omicron cases came slightly later, Inslee said, which is why he wanted to wait a little longer before relaxing indoor masking requirements in Washington.

“We’re making decisions based on the epidemiology of our state,” Inslee told reporters Feb. 9.

Inslee instead took the intermediate step that day of announcing an end to the state’s outdoor mask mandate, which applies to people attending large outdoor events of 500 people or more. That requirement ends Feb. 18. Inslee also announced that a ban on elective, nonemergency surgeries would end Feb. 18.

The lifting of mandates in Washington state comes as COVID-19 cases have declined over the past month.

Hospitalizations also have declined, but not as dramatically, according to the state Department of Health. An average of 302 people per day were hospitalized for COVID-19 in mid-January, while the average number of daily hospitalizations fell to 240 in early February.

Data on deaths from the past few weeks is still being reported and can lag by three to four weeks.  But in early to mid-January, the seven-day average number of people dying from COVID-19 was about 45 people per day, matching or surpassing previous peaks in the pandemic.

“No doubt, the health care system is still stressed in many ways, and it’s going to continue to be so,” said Dr. Umair Shah, the state’s secretary of health.

Still, Shah said, “This is an incredibly important milestone for us in the state of Washington, and we’re thankful that we’re getting there.”

Inslee originally imposed an indoor masking requirement in June 2020, during the height of the early pandemic when vaccines were not yet available.

He then relaxed indoor masking requirements for vaccinated individuals in June 2021, the same month he lifted several other pandemic restrictions.

But in August 2021, the governor reimposed the indoor masking requirements amid a spike in cases fueled by a rise in the delta variant of COVID-19. The new requirement has been in place since then, although it allows for some exceptions, such as letting vaccinated people remove their masks in private indoor office spaces when no visitors are present.

Chris Reykdal, the state’s superintendent of public instruction, recently said he thought it was time to phase out the indoor mask requirement for students, citing high vaccination rates and the widespread availability of rapid antigen testing in schools as some of his reasons.

Shortly after the governor announced the sunsetting of the mask mandate, Reykdal called it “a pretty powerful moment ... where we take another step to normalcy.”

“While folks will have the opportunity to continue to wear masks if they choose, this takes the state mandate out of the way,” Reykdal said Feb. 17.

The state Department of Health plans to issue updated guidance for K-12 schools the week of March 7, so schools can have time to prepare for lifting of the mask mandate on March 21.

Republican leaders in the state Legislature said they wished Inslee would end the mask mandate sooner.

"It's time to end the mask mandates now. Don’t wait another month," House Minority Leader J.T. Wilcox, R-Yelm, and Senate Minority Leader John Braun, R-Centralia, wrote in a joint statement Feb. 17. "If someone wants to wear a mask in public, it should be by choice — not by mandate."

Vaccine verification requirements are also being lifted. Inslee said the state’s requirement that people have their vaccine status checked in order to attend large events will expire March 1.

King County also announced this week that it will no longer require vaccine verification at restaurants, bars and other indoor spaces starting March 1.

Inslee noted that people can still choose to wear masks in indoor settings, and people should respect others who choose to continue to mask even after the state’s mandate expires.

"People will be able to make their individual decisions about wearing masks after March 21," Inslee said. "...We will protect that right."

This story has been updated to include quotes from the governor's press conference held on Feb. 17, as well as a response from Republican lawmakers. Update notice about change in date of end of mask mandate added Feb. 28.