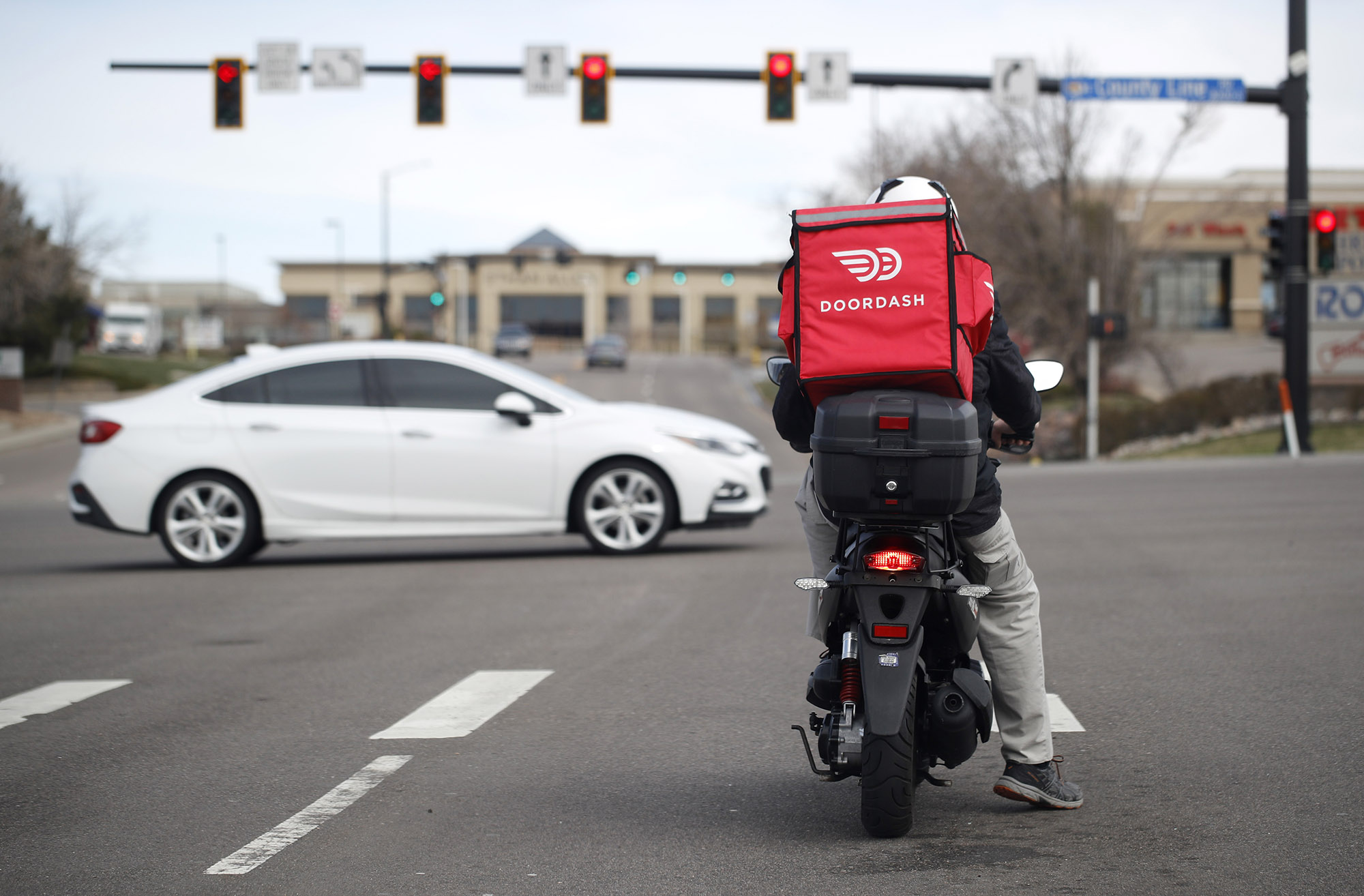 A food delivery rider waits for the traffic light to change on March 30, 2020, in Lone Tree, Colorado. (David Zalubowski/AP)

Driving from client to client, finding and sometimes paying for parking and waiting on a building manager to let her into an apartment are all part of a day’s work for Mandolin Noir, who provides dog-walking service through the Rover app. But they aren’t parts of the job she gets paid for.

And after that time spent traveling and waiting and paying for parking, gas, dog care supplies and other expenses, she said her take home pay can be as low as $15 an hour.

That’s less than Seattle’s $17.27 minimum wage at large employers. Some delivery drivers for platforms like DoorDash fare far worse, sometimes netting just a few bucks per delivery, according to Working Washington, an advocacy nonprofit focused on improving wages and conditions for low-wage workers.

Noir is part of a coalition of gig workers partnering with Working Washington to push the city for new regulations that would guarantee a minimum wage, along with pay transparency, flexible scheduling and other protections. The group estimates there are at least 40,000 app-based gig workers performing jobs in Seattle each year, not including Uber and Lyft drivers.

If passed, the law would apply to delivery drivers on Door Dash, Instacart, UberEats and others, along with workers who provide services through TaskRabbit, Rover and similar apps. The proposed policy would not apply to Uber and Lyft drivers, who are covered by Seattle’s 2020 Fair Share law and a similar state law that passed during the 2022 legislative session.

“Nobody should be working for less than minimum wage in Seattle in 2022,” said Working Washington Executive Director Danielle Alvarado at the committee meeting.

The Pay Up policy would accomplish that by requiring app companies to pay a per minute and per mile rate to delivery drivers that begins when they accept a job offer and ends when the job is complete. The base rates are tied to the city’s $17.27 minimum wage and the standard mileage rate set by the Internal Revenue Service.

Those base rates are then multiplied by an “associated cost” factor meant to offset some businesses expenses, such as vehicle wear and tear and the time necessary to log on and accept jobs, take breaks during the day, take care of administrative work and so on.

Wei Lin is a delivery driver for Gopuff, a snack and alcohol delivery service. Lin said most of the business comes in the afternoon and night shifts, so he mostly works 1 p.m. to 2 a.m., seven days a week to make enough to live on. Driving his personal vehicle for work means changing his oil monthly, buying new brakes annually, and filling up his tank every two days — a particularly painful exercise with gas prices sky high.

Workers on apps such as TaskRabbit and Rover, where the company does not track mileage and hours, will have their pay set under a slightly different formula presented to the worker before they accept a job.

In addition to addressing base pay, the proposed legislation would require companies to provide workers and customers with more information about jobs and costs. Workers would get the companies’ best estimate of a job’s time and mileage to complete, along with how much the job will pay — details many gig workers testified are currently not always available to them. Customers would get a breakdown of their costs, including how much of the charge goes to the worker and how much goes to the company.

Finally, the proposed policy would enshrine gig workers’ ability to set their own schedules as they please. Companies tout the flexibility of independent contracting as a perk of gig work. But workers testified that the apps punish workers for turning down too many jobs by reducing the number of jobs they can get in the future or by having their accounts deactivated.

For many workers, flexibility is a central reason for doing gig work. For example, Noir told Crosscut the flexibility of Rover helps her take care of her stepfather, who moved in with her after a hospital stay this winter.

The Pay Up policy would allow gig workers to cancel or refuse jobs if they have cause — including discovering information about the job is substantially incorrect, unforeseen obstacles for completion that come up or a good-faith complaint about harassment by a customer — without retribution from the companies.

Public testimony at the April 12 committee meeting was split nearly 50-50 between those for and against Pay Up. Many gig workers testifying in support of Pay Up spoke about their low wages and challenging working conditions, especially during the pandemic. Those against the bill included representatives from Instacart, Shipt and Uber, as well as industry groups such as the Washington Technology Industry Association, TechNet and the Washington Coalition for Independent Work, along with the Seattle Metropolitan Chamber of Commerce. One DoorDash driver, Brian Rodriguez, spoke against the bill, expressing concern it might accidentally harm delivery driver work.

Opponents cautioned that increased worker pay would likely result in higher costs for customers, in turn reducing demand for services and job opportunities for gig workers.

“Worker earnings in this sector are highly complex, and if regulated poorly, can adversely impact a broad ecosystem of merchants, customers, and workers,” said Molly Jones, Washington Technology Industry Association’s vice president of public policy. “We are concerned this ordinance fails to take into consideration sufficient stakeholder consultation and learnings and data from industry partners.”

Herbold said, however, that many of the app companies were at the table for the 13 stakeholder meetings the city council has hosted to help shape the Pay Up policy, along with gig workers, Working Washington, council members and staff and the Seattle Office of Labor Standards.

Councilmember Teresa Mosqueda joined Herbold and Lewis in supporting the Pay Up policy. Councilmember Sarah Nelson dissented, echoing the companies' concerns that the policy was too broad and could pose risks for the people it’s meant to help.

“My problem has always been the inevitable unintended consequences on the drivers, the small businesses that are supported by these apps and the customers when you impose a single regulatory framework on such a wide diversity of business models,” said Nelson at the committee meeting.

Nelson urged her colleagues to consider delaying implementation of the policy until further studies can be conducted. Herbold said she would not.

“I’m interested in learning about the impacts of that very, very basic standard and seeing if there are things to do to mitigate those impacts,” said Herbold. “But not as a prerequisite to the legislation. Again, this is a minimum work standard we want to extend to those workers.”

The Public Safety and Human Services Committee will discuss potential amendments to the bill on April 26 and will likely vote on those amendments on May 10.

This bill is the first in a series of legislation Herbold and Lewis plan to introduce under the Pay Up policy banner. Future bills are expected to address restroom access, anti-discrimination measures, background checks and other issues.

Correction: An earlier version of this article quoted Molly Jones saying "I am concerned." She said "We are concerned."