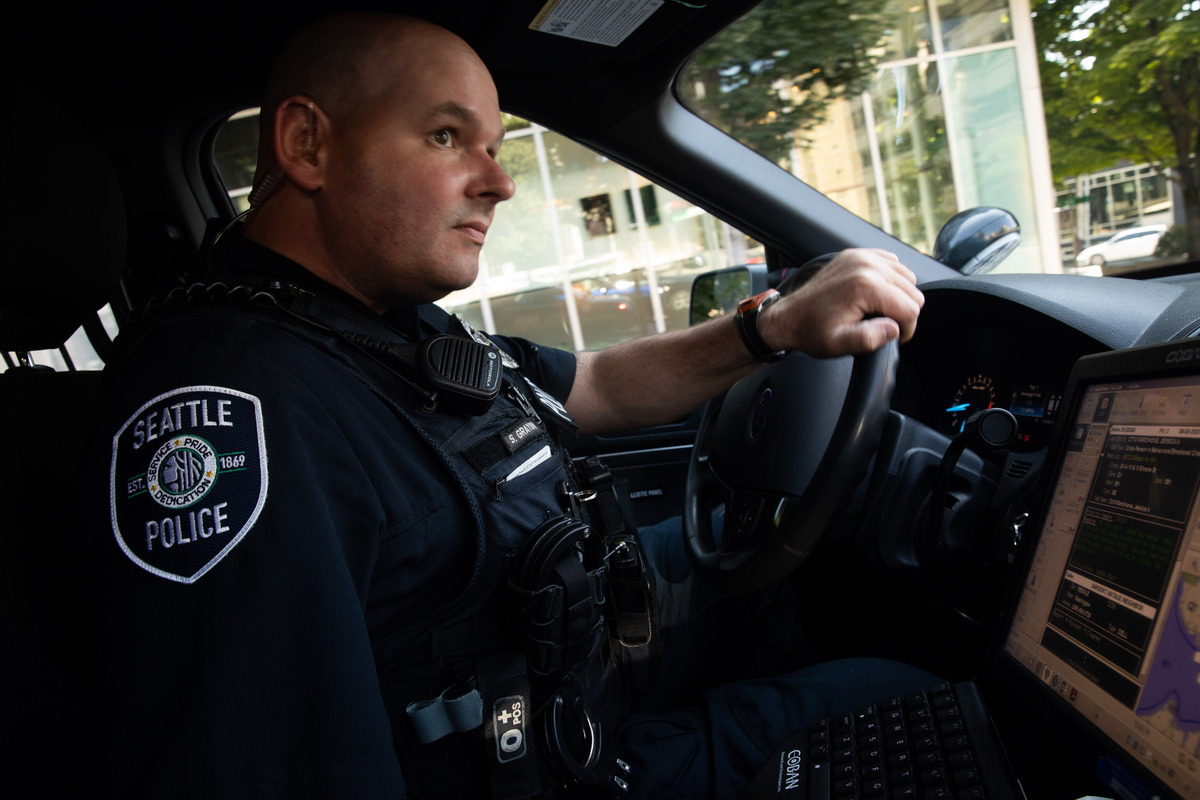 Crime gets a lot of airtime in Seattle these days. Headlines abound about retail theft and gun violence. Crime rates have increased. But perceptions of crime and safety can vary greatly from reality.

A new Crosscut/Elway Poll found Seattleites are just about evenly split when it comes to their concern over crime levels, or lack thereof.

The poll also looked at what voters think is at the root of the city’s rising crime rate and how they want city leaders to address it.

Pollsters surveyed 400 Seattle voters via landline, cellphone and text that directed people to an online survey. Respondents were distributed nearly evenly through the seven Seattle City Council districts, split evenly by renters and homeowners and gender and weighted to match the city’s racial demographics, incomes and age.

Seattleite’s perception of crime is the foundation of the poll. Respondents were asked whether they think crime is exaggerated, underplayed or accurately portrayed by the media. The city is nearly evenly split on the question: 35% said the media exaggerates how bad the city’s crime is, 32% said crime is being underreported, 25% said reports are accurate and 8% have no opinion.

Public safety and policing are also a central topic among Seattle politicians. City Attorney Ann Davison was elected in November on a tough-on-crime promise for more prosecutions. Councilmember Sara Nelson has made hiring more police officers one of her highest priorities. One of Mayor Bruce Harrell’s first actions in office was to call for a police crackdown downtown and in the Little Saigon neighborhood and followed it with a continued police focus on downtown called Operation New Day.

Thirty-six percent of the Crosscut/Elway Poll respondents said they themselves had been a victim of either a property crime (28%), personal crime (2%) or both (6%) in the past year. But 60% said as far as they know, someone in their neighborhood had experienced a crime, possibly illustrating a gap between perceptions and narratives of crime and the reality a majority experience.

Staci Wilkie is a lifelong Lake City resident who responded to the poll. Wilkie, who works downtown, said that to her mind, crime is unequivocally worse than it used to be in Seattle, and she is deeply bothered by the drug use and shoplifting she sees downtown. A carjacking in Northgate has her especially worried.

“That’s close to home and it’s scary,” Wilkie said. “My head is on a swivel constantly. Before I was cautious downtown. Now I’m cautious everywhere I go, even at home.”

Asked to pick from a list of potential causes of crime and say whether they think they are major, minor or noncontributing factors, respondents put a lack of mental health and addiction services at the top of the list. Eighty-five percent of respondents said that was a major factor in Seattle’s crime. The next highest contributor was homelessness, with 67% of respondents calling it a major factor. Economic conditions were cited as a major factor by 63%, while 56% pointed to political leadership,  and 53% cited a lack of law enforcement.

Virginia Salles, a homeowner in Rainier Beach who participated in the poll, said she thinks crime is a little worse now than it has been in recent years, but nowhere near as bad as it was in Seattle in the ’80s and early ’90s. She blames the city’s widening wealth gap for contributing to crime.

When asked where they think the city should direct its resources to deal with crime, 92% of respondents said funding for more addiction and mental health services. Eighty-one percent want to see more de-escalation training for police officers, 80% want more social programs to address crime’s root causes, 75% want to add more nonpolice staffing, and 73% want to see an increase in court staffing to process the caseload.

A smaller majority of respondents, 64%, said hiring more police would help, and just 51% said more prosecutions for low-level crimes such as shoplifting would help. It’s worth noting that respondents were not asked to rank solutions or pick just one, so the percentages add up to far more than 100. Still, they paint a picture of Seattleites’ priorities.

Poll respondent Sam Stimson is a renter and barista living in the Rainier Valley. He said the coffee shop he works at has been robbed twice in the past two months, but he still feels safe everywhere he goes in Seattle and thinks crime is an exaggerated problem.

To start improving conditions in the city, Stimson said he wants to see Seattle fund more social programs that address problems such as addiction and provide housing for the homelessness, rather than making arrests and sweeping homeless encampments. To pay for it, he wants to tax the city’s wealthy residents.

“Funding social programs would do a lot more to treat systemic issues instead of just treating the symptoms we see. The city could train more social workers and have more public programs,” Stimson said.

Digging into respondents’ demographic data shows a classic, and mostly intuitive, divide in the city. Older, wealthier residents who’ve lived in Seattle longer tend to think crime is either being reported accurately or underreported. Younger, less wealthy residents who haven’t been in the city as long tend to think the media is exaggerating the crime problem. The exception is the 45% of people making less than $50,000, who said crime is underreported by the media — the highest of any income bracket.

White respondents were likelier to think crime is exaggerated in the media than people of color, with 39% of white people saying it’s exaggerated and 39% of people of color saying it’s underreported. But that comes with the very important caveat that the sample sizes were too small to break out responses by race, and perceptions and experiences of crime within racial groups vary significantly.

So what do Seattleites think of Mayor Harrell so far and his efforts to address crime and homelessness in the city, now that he’s four months into his term?

Forty percent of respondents said they’re encouraged so far by the new mayor, 19% said they’re discouraged by him and 41% said they don’t have an opinion. As is so often the case in Seattle politics, homelessness is a dividing factor. For those with positive views of Harrell, 20% said it’s his focus on homelessness they’re encouraged by. Among those discouraged by the mayor, 23% point to his approach to homelessness. Some advocates worry Harrell is returning to a policy of sweeping encampments, which can move the problem out of sight, but rarely helps people exit homelessness.

Asked to respond to the voters’ perception of his early performance, Harrell provided a statement by email.

"Seattleites are rightfully concerned about the impacts of crime at home, in the community, and across the city,” wrote Harrell. “In One Seattle, everyone has an absolute right to safety. That's why my administration is taking action with urgency and a holistic approach — a comprehensive effort bringing together law enforcement, social services, economic development, community engagement, and neighborhood activation and beautification. We will continue to focus on innovative and sustainable solutions that make Seattle safer now and in the long-term."

To get a qualitative sense of voter's views on the city, the poll also asked people to describe their feelings about Seattle today in one word, here's what they said: