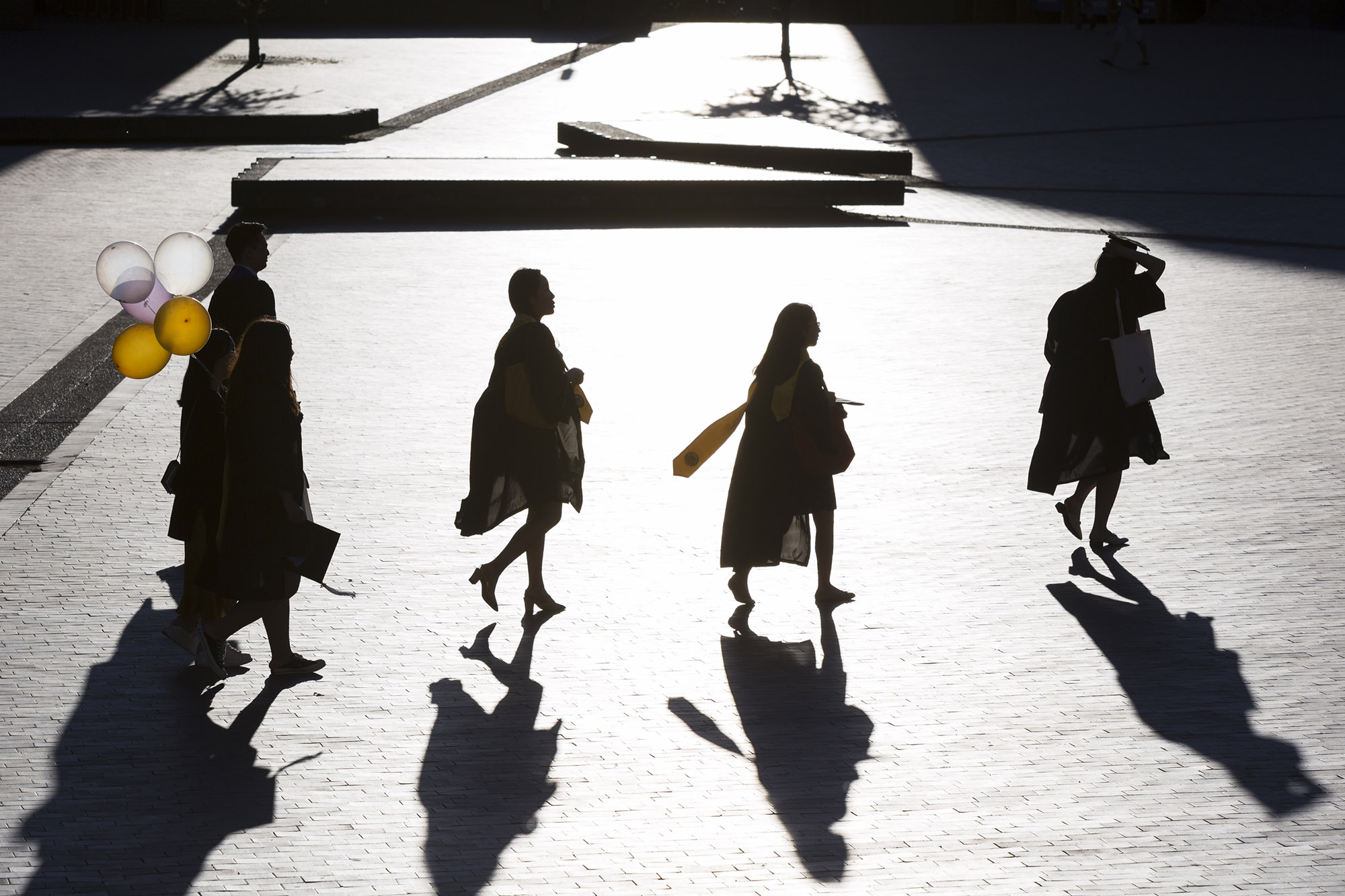 A group of graduates in silhouette walks through Red Square after a commencement at the University of Washington on June 11, 2019. (Paul Christian Gordon for Crosscut)

As the federal government debates student loan forgiveness and increases interest rates on future loans, the Washington State Legislature is stepping in to make borrowing for school more affordable for students here.

“One of the biggest frustrations that I heard from parents was the cost of college,” Sullivan said in an interview with Crosscut, “and from students as well.”

The lawmaker has advocated a 1% ceiling on interest rates to make it easier for students as they move on to their next endeavors. HB 1736 passed both houses on nearly a party line vote.

The Washington program arrives at a time when Democratic legislators at the federal level are pushing President Joe Biden 一 who paused student loan repayments for more than 44 million Americans 一 to reduce student loan debts for borrowers by $50,000, a much higher figure than Biden has indicated he would forgive. According to HB 1736’s text, the Evergreen State has an estimated 800,000 people with student debt, with an average debt of about $33,500.

The promise of a low-interest Washington program may be especially enticing amid news that federal student loan interest rates will increase for the 2022-23 academic year. Interest rates on federal loans have ebbed and flowed in the past few academic years: For example, loans for undergraduate students had a rate of 5.05% in the 2018-19 academic year and  2.75% in the 2020-21 academic year.

“At 17, I thought student loans were an investment,” said Carla De Lira, who testified for HB 1736 on Jan. 31. “I did not fully understand the implications of taking out tens of thousands of [dollars in] loans.”

Washington joins a host of other states that offer their own student loans.

In Massachusetts, for example, residents can access zero interest student loans that must be repaid within a decade, according to a roundup of state programs provided by the National Conference of State Legislatures. Georgia students enrolled in the state’s university and technical college systems, as well as those in private schools, can take out loans with fixed interest rates of 1%.

“We’ve heard stories over and over about how debt is overburdening students, and it’s time to do something about it,” Rep Sullivan said in a statement. “While the state can’t cancel federal student loan debt, we can provide hope for students to be able to access a college education without taking on crushing, high-interest debt that puts things like home ownership out of reach after they graduate.”

Washington lawmakers plan to pay for the program with a one-time deposit of $150 million (earlier versions of the legislation aimed for a bigger investment of $300 million to $500 million). The Washington Student Achievement Council will need to contract with an actuary to analyze the plan, including whether the program can be self-sustaining on loans repaid at 1% interest.

“It just makes sense to me that you have a guaranteed 1% rate, that’s it,” Sullivan said. “You’re not at the whim of whatever the [federal government] is offering at the time.”

The council is also tasked with ensuring institutions prioritize these new state loans for specific groups, including first-generation students and those considered lowest income.

Borrowers who were 18 to 39 years old and identified as first-generation students were more likely than their counterparts to fall behind on loan payments, according to data from the Federal Reserve, which also identified Black and Hispanic borrowers (age 18 to 39) as “disproportionately likely to be behind on their debt.”

Most, but not all, of the state’s Republican representatives rejected the legislation.

The bill was heard in the House College and Workforce Development Committee, as well as in the chamber’s Appropriations Committee. Rep. Kelly Chambers, R-Puyallup, who sits on both, voted against the proposal, preferring to support measures that put money in people’s pockets so they can run their households.

“Right now, with inflation, with supply chain issues, with affordability in Washington, we’re just seeing the squeeze on typical, working families in Washington,” she said in an interview with Crosscut.

Chambers noted that the state has made recent investments in higher education. In 2019, legislators passed the Workforce Education Investment Act, a bill intended to make college more affordable for lower-income students.

Two GOP legislators, Rep. Skyler Rude, R-Walla Walla, and Rep. Joel Kretz, R-Wauconda, broke from their colleagues to vote yes on the bill.  Rude considered interest a significant hurdle in people’s efforts to pay down their loans — an issue he understands personally as someone with student debt.

“It’s not 1%, I can tell you that,” said Rude, who hopes to see a shift toward no- or low-interest loans.

The representative also got involved with the crafting of the bill, when he introduced an amendment to guarantee the program also covers students attending independent colleges in the state.

What’s left to figure out

Elements of the program were up in the air when HB 1736 passed, including its final interest rate, loan limits and the distribution between undergraduate and graduate students.

Undergraduates who meet the program’s requirements are eligible, while graduate students must be pursuing “a specialized field of study” that is experiencing a workforce shortage or in high demand.

Reanne Chilton, a graduate student pursuing a doctorate in clinical psychology at Washington State University, testified in favor of HB 1736 on Feb. 17. Chilton, the first in her family to get a college degree, described having to rely on state and federal assistance to pay for her education because her family could not financially support her schooling.

“I have always known that I would have to work harder than others to get an education,” she said.

In her testimony Chilton described turning down an offer to pursue a graduate degree in teaching, believing she could not afford it. She eventually decided to continue her education, which meant leaning on student loans throughout her graduate career to pay for expenses such as textbooks.

“In a perfect world, all students would be able to go to school without having to take on any debt,” Sullivan said. “Student loans are part of our system. That’s the reality and, if it is, then let’s make it at least more workable.”

The Washington Student Achievement Council is required to report to Gov. Inslee and the Legislature by Dec. 1 on details of the program, including its design, sustainability and implementation.