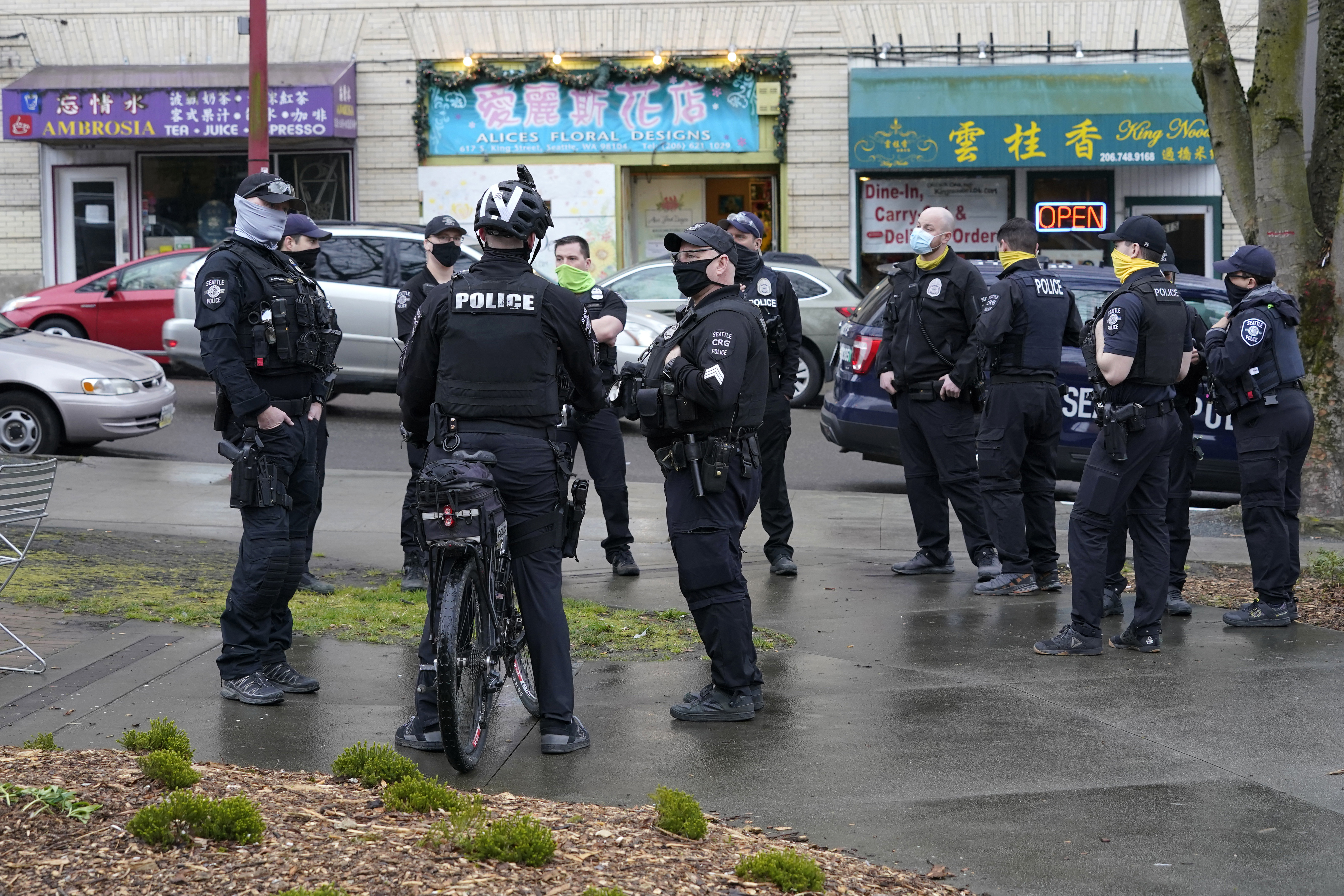 Seattle police officers confer after taking part in a public roll call at Hing Hay Park in Seattle's Chinatown-International District on March 18, 2021. The Seattle Police Department had detectives and nonpatrol staff respond to emergency calls because of a shortage of officers that union leaders had feared would be made worse by COVID-19 vaccine mandates. (Ted S. Warren, AP file)

The Seattle City Council laid the groundwork on Tuesday morning to allow the Seattle Police Department to offer hiring bonuses or other incentives to new officers, pay for moving expenses and hire a police recruiter.

Several council members and Mayor Bruce Harrell say these steps are necessary to combat years of mass resignations and slowed hiring in the department.

Council members passed two items out of the May 10 Public Safety and Human Services Committee: a resolution stating their support for funding a hiring incentive program and a proposed ordinance that would allow SPD to pay moving expenses for experienced officers coming from other departments, as well as hire a recruiter and pay for a recruitment ad campaign.

The department has lost nearly 400 officers since January 2020, hiring only 145 in that same timeframe. Seattle’s experience is part of a national trend of U.S. police departments losing officers to resignations and retirement far faster than they can hire replacements.

A national survey of police departments found low morale in the face of shifting views of policing, the COVID-era Great Resignation and an aging workforce hitting retirement were all factors in the imbalance between departures and new hires.

Councilmember Sarah Nelson sponsored the resolution to support the creation of an incentive program for new hires. The exact incentives in the package will ultimately be decided by Mayor Bruce Harrell’s office, but Nelson has lobbied for hiring bonuses, citing the bonuses offered by other departments around the region.

The Tacoma Police Department offers a $10,000 sign-on bonus to lateral hires — sworn officers from other departments moving to the Tacoma PD — with $7,500 more after a probationary period and another $7,500 after a year of service. Bellevue offers new hires a $1,000 bonus after completion of field training and lateral hires a $16,000 bonus. Kirkland has a $16,000 hiring bonus for lateral officers.

The incentive program would be paid for by unspent salary money in SPD’s budget. Because the department has lost more officers than it has hired, it has about $4.5 million in salary savings from its $355 million annual budget. When the city council adopted its 2022 budget last November, it placed a proviso — essentially a conditional block — on the department spending its salary savings.

Nelson’s resolution is a statement of intent by the council to partially lift that proviso. Nelson’s original goal was to lift the proviso entirely, giving the department access to all $4.5 million, but an amendment from Councilmember Lisa Herbold caps the funding at the amount necessary to provide hiring incentives for at least 98 officers, the department’s current hiring goal. That exact figure is yet to be determined.

“We don’t have enough money to have officers respond quickly to emergencies,” said Nelson at Tuesday’s committee meeting. “To me nothing is more important than ensuring the safety of our residents.”

The resolution passed out of committee 4-1.

Councilmember Teresa Mosqueda was the lone no vote. She said her opposition stemmed from concern about a projected $35 million city budget shortfall that the SPD’s salary savings could help fill. Mosqueda also expressed a desire to fund other social services and police alternatives that she said could help improve public safety in Seattle as well.

“This is not the time for us to be looking at giving over money to SPD when we are asking other departments to put a hold on spending and potentially asking for reductions next year,” she said at Tuesday’s meeting. “We need every dollar available to make sure we are investing in core government services. That is making sure people have access to critical services in addition to public safety.”

Herbold sponsored the ordinance to allow SPD to pay moving expenses for lateral hires and to hire a recruiter. Her original bill would have used $650,000 in SPD salary savings to pay for the moving expenses and a recruiter. An amendment from Nelson expands that to $1.15 million toward moving expenses, a recruiter, a marketing and ad campaign and a national search for a permanent police chief.

The ordinance passed out of committee 4-1, with Mosqueda again serving as the lone dissenting voice.

Both the resolution and ordinance will go to the full council for consideration on May 24.

The idea to create police hiring bonuses and other incentives has garnered broad support in Seattle. The Downtown Seattle Association and the Seattle Metropolitan Chamber of Commerce have voiced support. Chamber policy director Mackenzie Chase testified Tuesday that the group wants a “yes, and” approach that includes more officers along with more alternative emergency responses and social services.

“This legislation is rooted in anti-Blackness and racism,” said Travonna Thompson-Wiley, a community organizer and council District 2 resident. “Why should we continue to invest in a system filled with oppression and lacking accountability? Y’all give SPD a blank check while residents are being displaced, unable to afford child care, lack food support and get thrown in cages.”