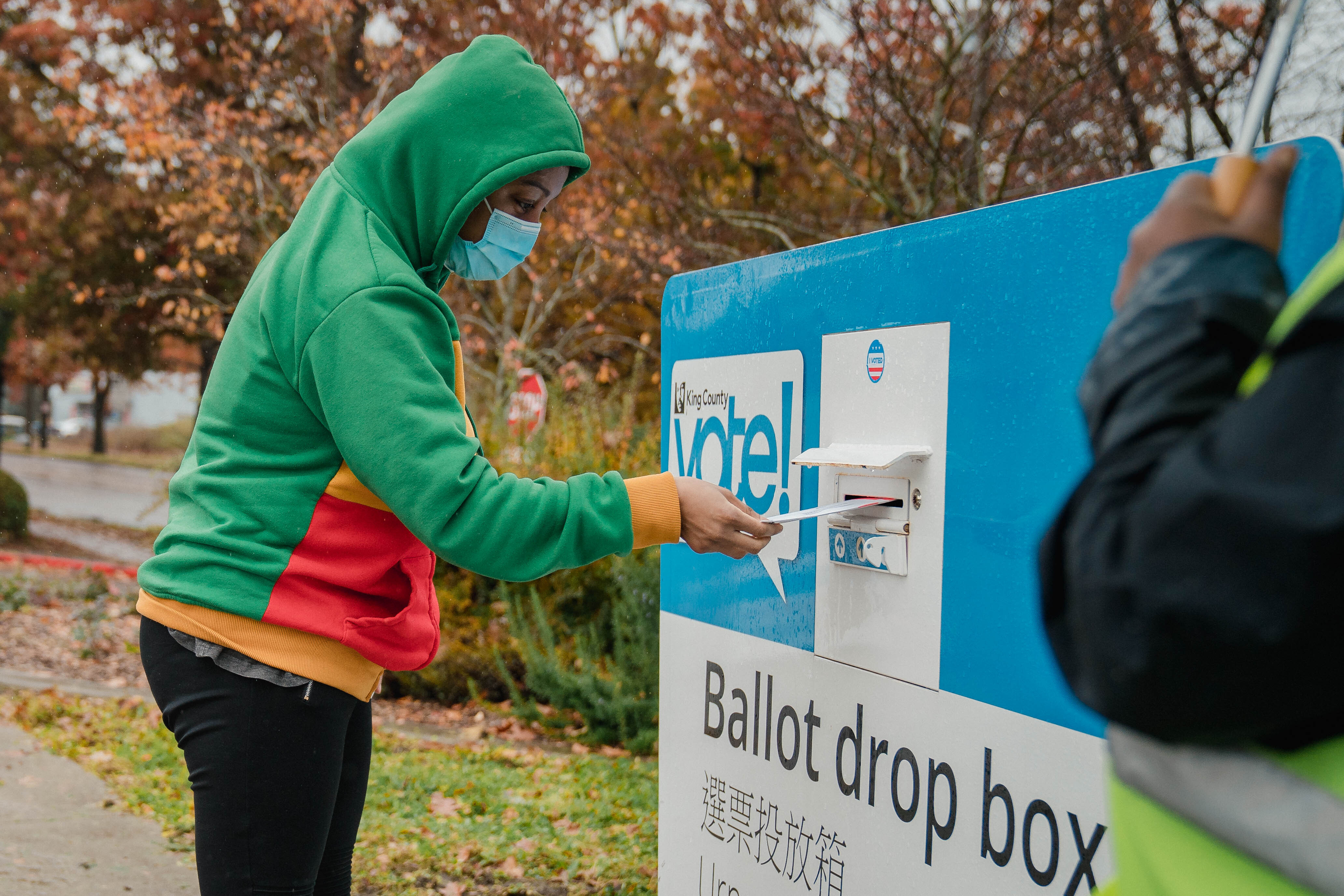 Politicians in Washington state would be wise to channel the core message of Bill Clinton’s 1992 presidential run: “It’s the economy, stupid.”

The newest Crosscut/Elway poll of statewide voters found that economic issues are the top concern for Washingtonians.

Poll respondents were asked an open-ended question about what issues they want to hear state legislative candidates discussing. About 33% responded with an economic issue including inflation and cost of living, housing, income inequality, jobs and unemployment. This was only the second time since 2014 that people cited the economy as their top issue in the Crosscut/Elway poll. The last time was about six months ago.

Homelessness was the next most common concern with 17% of voters citing it as one of their priority issues. Homelessness has been a perennial top-three issue in Crosscut/Elway polls in recent years as the crisis has continued across the state.

Another 15% of respondents cited a public safety issue including crime, drugs and police reform. Fourteen percent of respondents said they want to hear politicians’ plans for addressing abortion and women’s rights in the state. Taxes rounded out the top five issues, with 12% of respondents citing taxes in general, property taxes, and state budgeting and spending as key concerns. 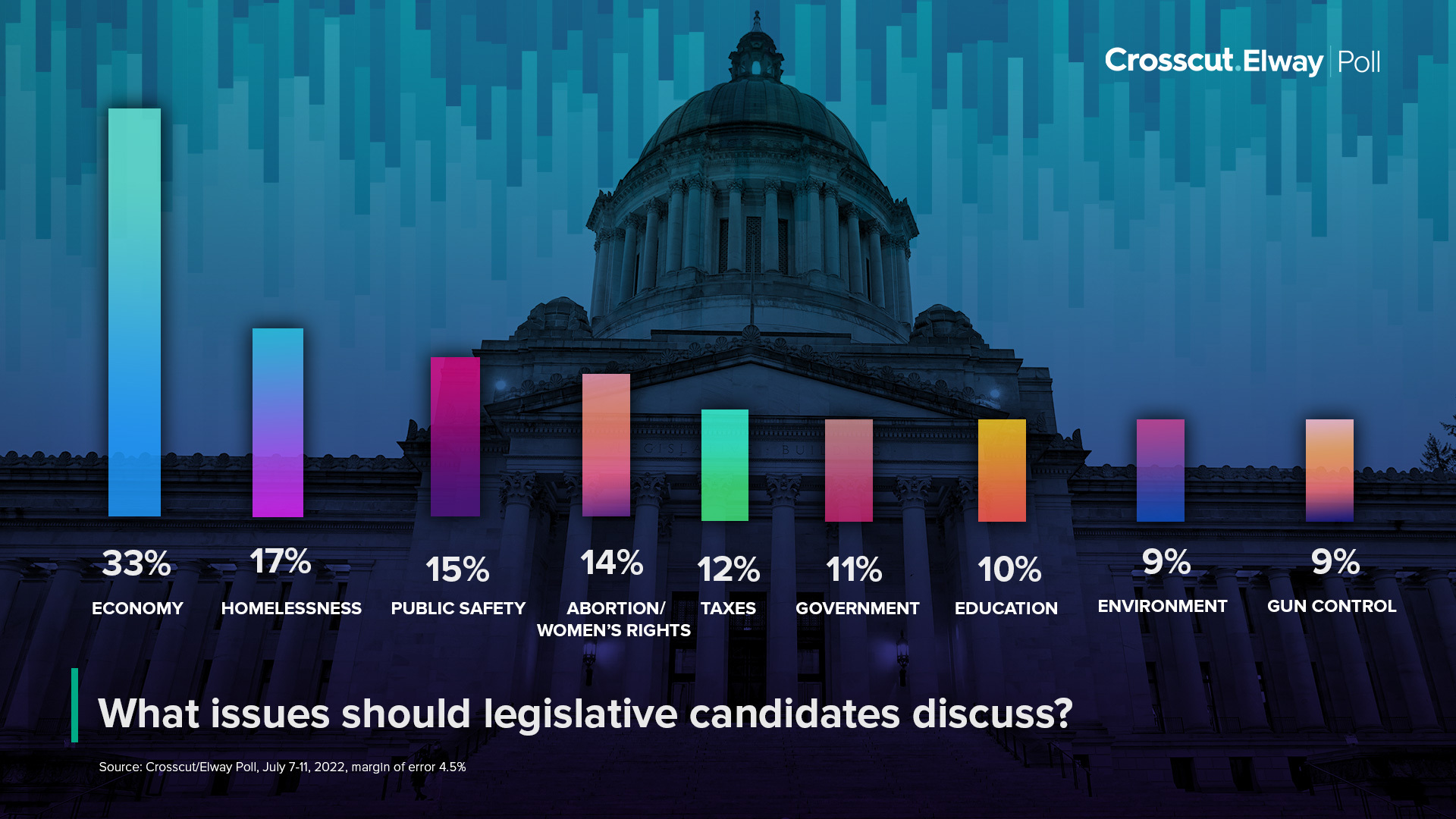 With U.S. inflation hitting a 40-year high in June, it’s not surprising voters are prioritizing pocketbook issues. Concern about the economy was shared fairly evenly among Democrats (37%) and independents (33%), while 25% of Republican respondents cited it as a top concern.

“It seems like I can’t step out the door without it costing me a bunch of money,” Ensminger said. “Groceries, filling up the vehicle to go somewhere, doing fun things with my grandkids, it’s so costly. My grandkids don’t ask to do a lot. So when they do, it’d be nice to be able to afford it.”

Ensminger’s economic anxiety extends beyond day-to-day costs; she also worries about the ever-rising cost of housing in her community. She said she’s thinking about selling her house someday, but fears she wouldn’t be able to afford a new home if she did. The average home price has doubled in Chelan County in the past five years, according to Redfin.

Bruce Lomer, a 65-year-old Democrat in Seattle, wants to hear cogent plans from Democrats for a post-pandemic economic recovery.

“The Democrats have done a very poor job of messaging,” said Lomer. “They’re almost embarrassed to criticize anybody. They’re too nice. They have to learn to be a bit more forceful.”

Like Ensminger, Lomer also worries about skyrocketing housing costs, especially as he looks toward retirement. “I think at a more Seattle local level we’re off track, especially with the housing crisis,” he said. “Values have shot up … and it’s pricing people out of their homes, especially retirees.”

Because respondents were asked about priority issues as an open-ended question, some like-issues were grouped together such as inflation and housing costs. Looking at individual answers, however, abortion was the second most common answer among respondents after homelessness.

Unsurprisingly – as it is a deeply partisan issue – 23% of Democrats cited abortion as a top concern compared to just 7% of Republicans and 9% of independents.

The poll was conducted July 7-11 among 400 registered voters statewide, just two weeks after the Supreme Court overturned Roe v. Wade. The Crosscut/Elway Poll has a 4.5% margin of error at the 95% confidence level, which means that if the survey had been conducted 100 times, the results would be within 5 percentage points of the results reported here at least 95 times.

Abortion is legal in Washington state, something many Democratic politicians have vowed to protect. Gov. Jay Inslee has expressed a desire to codify the right to abortion in the state constitution, which would require passage by a two-thirds super majority in the state Legislature, followed by voter approval of a ballot measure.

Protecting abortion rights through the more onerous constitutional amendment process would make it harder for Republicans to eliminate those rights should they gain majorities in the state House and Senate. They could overturn Washington’s Reproductive Privacy Act, which became law in 1991 through a voter initiative.

Respondents were asked a separate question about what they think the Washington state Legislature should do about abortion rights in the wake of the Supreme Court’s decision on Roe. Forty-one percent of respondents want abortion rights protected in the state constitution. Another 32% said to keep the state law as is while 23% want more restrictions on abortion in Washington.

Andrianna Cseri, a 31-year-old Democrat from Bothell, says abortion rights are a top issue for her this election because she’s thinking of her young daughter’s future. Alhough she thinks Washington is in a pretty good place on abortion rights relative to many other states, she wants to see more progress on the issue.

“This is a conversation for a doctor and a woman, not anyone else,” Cseri said. “We worked so hard to get to this point and I don’t want to move backwards. I have more rights now than my daughter will when she grows up and that seems absurd to me. I would love to see abortion rights cemented in Washington.”

County election offices began mailing out ballots on July 15. Unregistered voters can still register for this election by July 25. Ballots must be returned or postmarked by Election Day: Aug. 2.

For a complete list of candidates and issues on the ballot this primary, read Crosscut’s 2022 Voter Guide.

Correction: This article has been updated to reflect that county election offices mail out ballots, not the Secretary of State office.