As the City Council digs into Mayor Harrell's $7.4 billion 2023 budget proposal, there's friction over policing, homelessness and how to pay for a big shortfall. 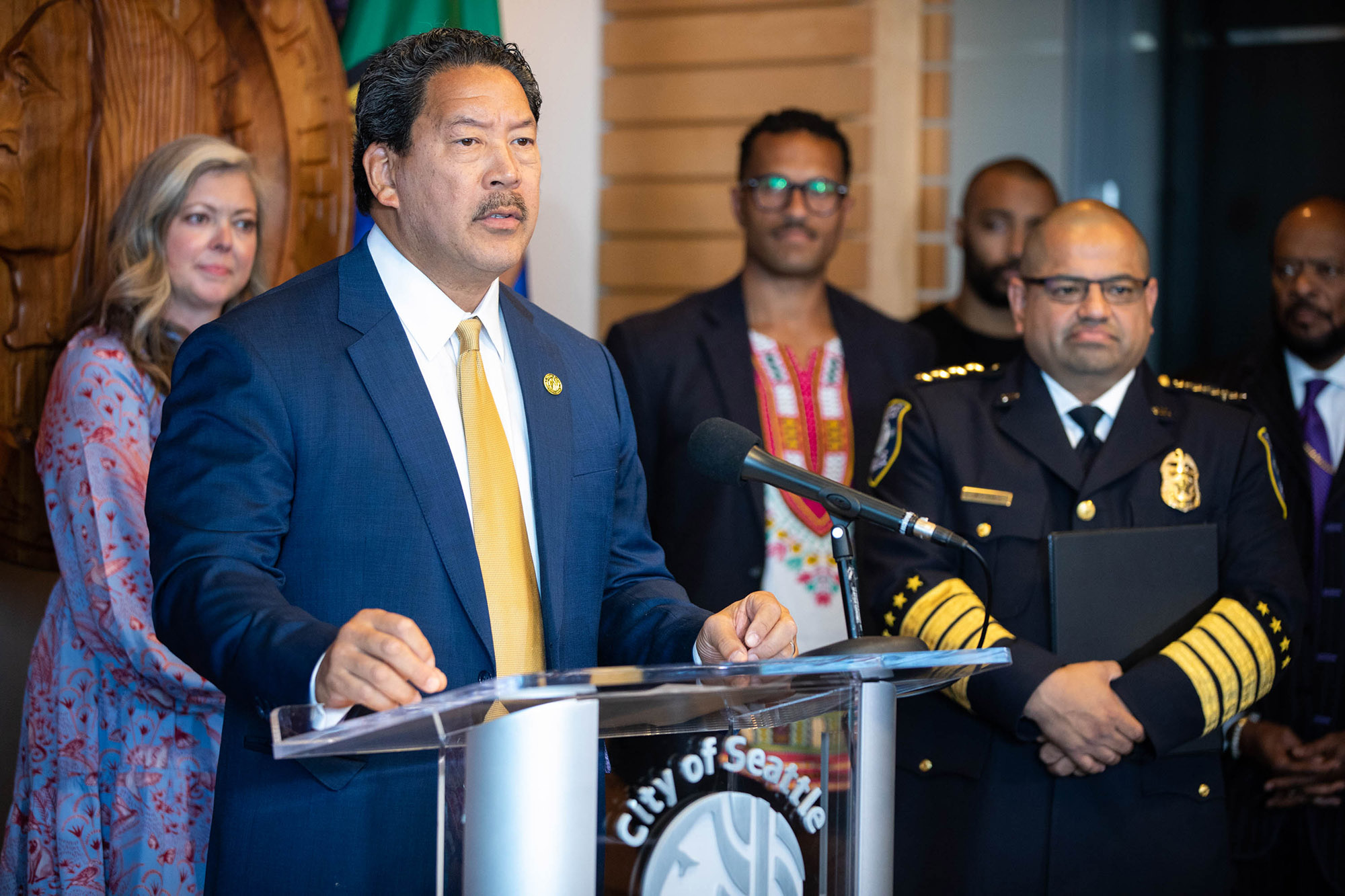 It's city budget season in Seattle and everyone – from the mayor to the city council to department heads to advocates of all stripes – wants their priorities paid for. The city is facing a $141 million budget deficit in 2023, however, and the shortfall is expected to grow in coming years, so budget cuts loom large and there will certainly be tradeoffs. The city council and the mayor need to hash out whose priorities get the money they need and whose will be cut.

The budget is now in the city council’s hands. Last week, council members held four days of budget hearings to work through the mayor’s proposal and begin hashing out their priorities.

Over 26 hours of hearings, several conflicts emerged – both between the council and mayor and within the council. They centered on how to pay for the budget shortfall, undoing pandemic-era police reforms and how to address homelessness. Here are five key issues to watch as the budget process plays out.

The city is required by law to have a balanced budget. With a projected $141 million revenue shortfall next year, two choices are on the table: cut costs or find a new source of money to close the gap. Harrell has proposed a hybrid plan.

In his proposed budget, many departments, though not all, see reductions. To stave off deeper cuts, Harrell wants to fill some of the hole in the general fund with about $95 million in tax revenue earmarked for affordable housing, homelessness, climate resilience and small business support in 2023 and $93 million of it in 2024.

Seattle created the Jumpstart Payroll Expense Tax on large businesses in 2020. After first being tied up in court then redirected to help with pandemic emergency costs, the tax is operating as designed and is proving lucrative. It raised $231 million in 2021, $31 million more than estimated.

As part of his plan to use Jumpstart revenues, Harrell also sent the council a proposal to revise rules governing how those funds can be spent, which would open the door to always using Jumpstart to backfill deficits in lean budget years – something council budget chair Teresa Mosqueda strongly opposes.

“I want to make sure we’re not creating cliffs or ebbs and flow in programs that are intended to serve our most vulnerable,” said Mosqueda during last week’s budget hearings. The council might consider a middle ground to allow the use of Jumpstart in this biennial budget, but restrict the proposal to use it for budget gaps in perpetuity.

In response to 2020’s calls for police reform and racial justice, the Seattle City Council voted to move the parking-enforcement division from the police department to the department of transportation.

The transition was bumpy. Administrative oversight led to parking-enforcement officers working without authority under SDOT for seven months, which meant the city had to refund $5 million in parking tickets and dismiss another $5 million in unpaid tickets written during that time.

In a recent internal survey of parking-enforcement officers, a majority said they wanted to move back to the SPD. Harrell has proposed doing just that, putting $20 million in the police department budget to pay for it. He argues it will be more efficient, since most parking-enforcement operations are still physically run out of the police department, and the move will result in $5 million in administrative cost savings.

Councilmember Lisa Herbold, who chairs the public safety committee, voiced concern about moving parking enforcement back to SPD, but doesn’t want to keep it in SDOT either. She instead wants to see it move to the newly formed Community Safety Communications Center, which handles 911 calls in Seattle and is another attempt by the city council to remove civilian roles from the SPD.

Relative to the total $375 million proposed police budget, Harrell’s request to spend $1 million piloting a gunshot detection technology program in Seattle is small. But it generated a big response from councilmembers last week.

Gunfire detection systems use audio and video monitoring to alert police to live gunfire. ShotSpotter, one of the best-known companies that produces the technology, has contracts with Chicago, Detroit, St. Louis and others.

In their presentation about the technology, council central staff said it has been shown to increase police response time to gun violence. But they also cited a peer-reviewed study that found ShotSpotter has led to increases in biased policing, because officers use ShotSpotter’s presence in a neighborhood as a pretext for stops. In St. Louis, a study found, the technology has led to a reduction in 911 reports of gun violence in neighborhoods where it’s installed.

Herbold once again raised opposition to the mayor’s proposal, saying that while she appreciates his accurate assessment of rising gun violence as a major issue, she wants instead to see increased investment in gun-violence prevention programs.

“In my conversations [with the mayor] about the proposal, there is an understanding that this technology is not a gun-violence prevention tool, but rather there's a belief that it is a tool that helps the prosecution of people engaged in gun violence,” she said during the budget hearings. But, Herbold continued, her understanding from the peer-reviewed studies is that the technology neither helps with gun violence reductions or leads to more weapons arrests.

Nelson, on the other hand, wants to see the pilot program go through. “Gun violence is going in the wrong direction. To me this is another tool we can have in our toolbox.”

Shortly after Harrell took office in January, he created the Unified Care Team, an intradepartmental group focused on city cleanup and encampment removal. The Team serves as a customer-service portal for resident complaints; cleans up graffiti and trash in parks and public spaces; and, as part of the removal of unauthorized homeless encampments, does outreach work meant to connect their residents to shelters and services.

Harrell has proposed spending $38 million on the Unified Care Team in 2023, including adding six full-time homeless outreach staff. The proposal would create four to six units within the team, each assigned to a specific region in the city. The mayor’s staff argues this approach will help them better serve residents of those communities and build better relationships with the homeless people they’re trying to connect to services.

Several council members raised concern about expanding the city’s capacity to remove encampments while the city still suffers from a severely insufficient amount of shelter space and affordable housing to refer people to.

“If we want to spend several million dollars making sure the parks and city are clean, that’s fine,” said Mosqueda. “What I don’t understand is why that money has to be tied to moving people from one side of the street to another.”

Councilmember Andrew Lewis, who chairs the public assets and homelessness committee, supports encampment removals by the Unified Care Team if they lead to people getting connected with shelter and housing.

"I want encampments to be removed as quickly and efficiently as possible," Lewis told Crosscut by phone. "But if we just have an encampment removal that moves people a few blocks away, that is something I’m trying to avoid."

He said he’d be happy to see the city council impose performance metrics on the Team’s work. But Lewis said he’s leery of reducing the mayor’s proposed budget for the Team without coordinating with Harrell on a plan.

Seattle’s Human Services Department manages the city’s social safety-net programs. But the actual work of providing elder care, homeless services, youth programming, victim counseling and much more falls on the more than 170 nonprofit organizations that contract with the department.

Those organizations have long struggled with a workforce crisis, with low wages and high-stress work leading to significant turnover. The issue predated the pandemic, but the extra stresses of that era made the turnover problem more acute.

In 2019, the city council voted unanimously to tie Human Services Department contract increases to the Consumer Price Index, in part to ensure wages at least increased to match inflation. In his proposed budget, Harrell would cap those contract increases at 4%. Provider contracts were supposed to increase by 7.6% in 2023, however, meaning Harrell’s proposal amounts to a pay cut.

The proposal drew the ire of many social-service providers who testified in opposition at last week’s budget hearings. Mosqueda, Morales and Herbold also opposed to Harrell’s proposal.

“We’ve been very, very clear on the council about our intent to invest in our provider workforce,” said Herbold at the hearings. “Yet the budget as proposed fails to follow the law and only provides a 4% inflationary increase, far from the 7.6% required.”

She continued, “This leaves council saddled with a huge gap… and the difference is taken out of the pockets of frontline workers who are least able to afford it.”

With the first round of budget hearings out of the way, city council members are now working on their proposed amendments to the mayor’s budget. They will then work to balance any adopted amendments with the mayor’s proposal before finalizing and adopting the 2023-2024 city budget in late November.

If you have your own disagreements with the mayor’s budget proposal, or the counterproposals the city council is introducing, you can weigh in on the budget with public testimony or in writing.