Unlike other minimum wage fights, Tukwila's sees no opposition

If it passes, the city’s new $17-plus hourly wage would apply to businesses with 15 or more employees. 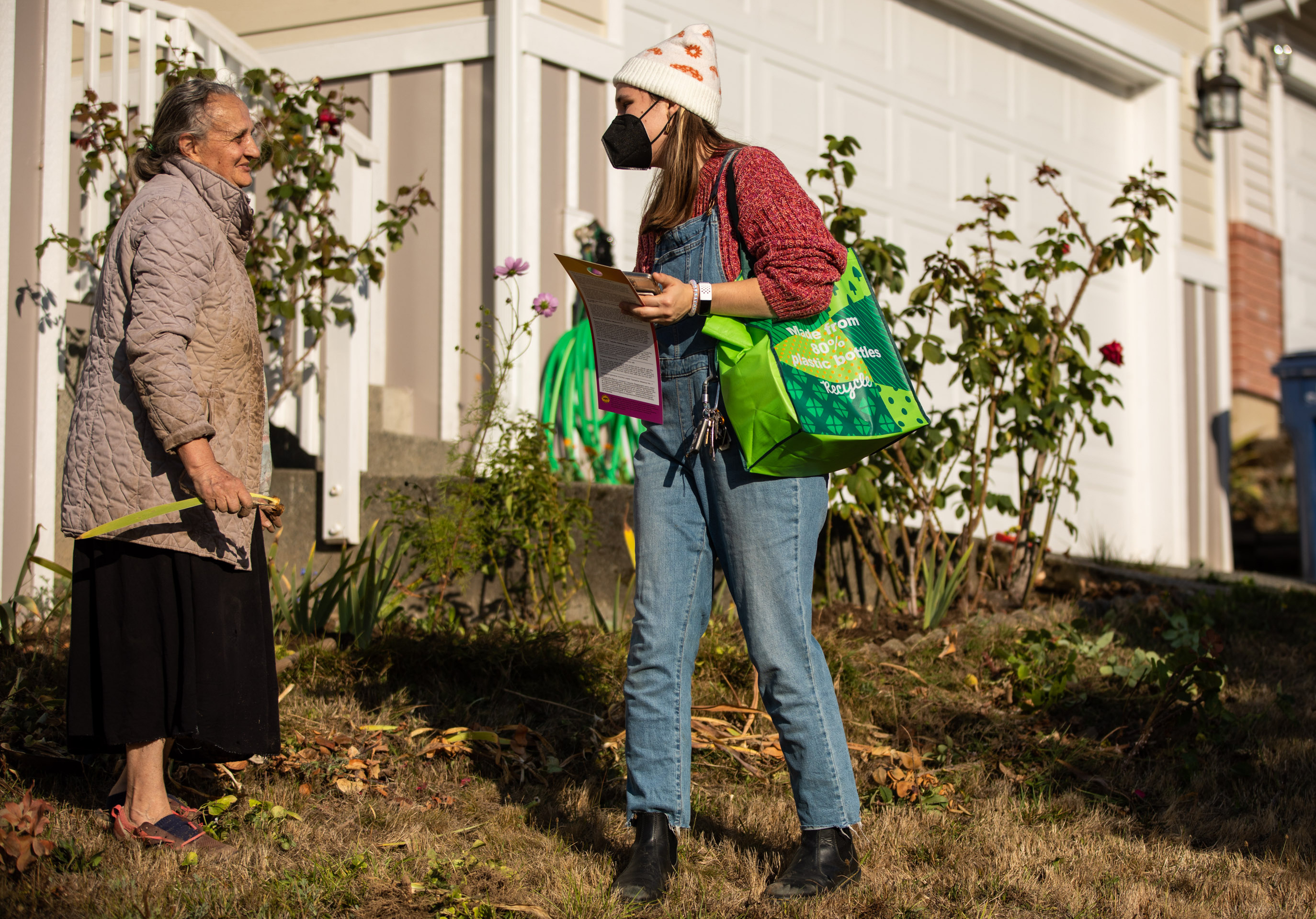 George Manning, field manager with the Washington Community Action Network, right, speaks with a voter while canvassing a neighborhood in Tukwila on Friday, Oct. 28, 2022. Manning is asking voters about Initiative Measure #1, which will decide whether to raise Tukwila’s minimum wage. (Amanda Snyder/Crosscut)

It was a small election that drew notable attention: In 2013, voters in the city of SeaTac narrowly approved a $15 hourly minimum wage for some eligible workers. The next year, the city of Seattle followed suit, moving to phase in a broader $15 minimum wage that became the highest of any city in the nation.

Voters around Washington took it from there. In 2016, they approved a minimum wage hike to $13.50 per hour. Indexed to inflation, each of those minimum wages go ever higher, along with the state’s housing costs and overall cost of living.

Now, proponents of a similar measure this year in Tukwila are campaigning for a minimum-wage hike that would put the city at roughly the current inflation-adjusted wage floors for Seattle and SeaTac airport workers. If approved, Proposition 1 will establish different wage floors for large businesses and medium-sized businesses, with exemptions for some small businesses.

But this time around, there’s much less drama for the city measure being pushed by the advocacy organization Transit Riders Union, Washington Community Action Network, several labor unions and others.

The measure has no formal opposition – no spending committee to put out ads or mailers against it, not even an opposition statement in the voter’s guide.

“This is the thing about this campaign that just totally blows my mind,” said Katie Wilson, general secretary of the Transit Riders Union. “More established organizations were saying don't do this, we're going to get crushed.”

“Every time there's been a campaign to raise the minimum wage ... there's always been really powerful opposition,” she added. 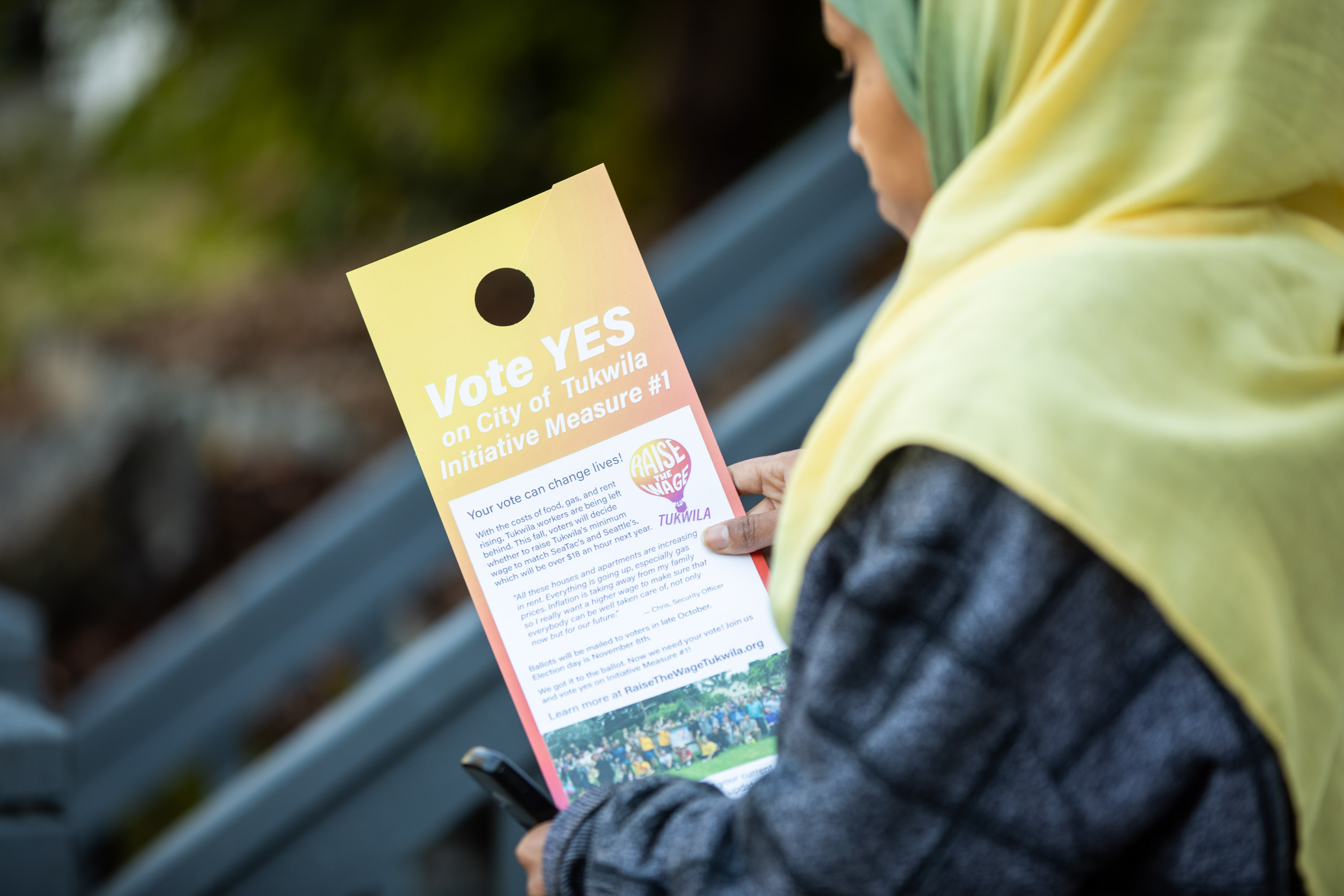 A voter discusses the minimum wage with field manager George Manning while they canvass a Tukwila neighborhood on Friday, Oct. 28, 2022. Manning is asking voters about Initiative Measure #1, which will decide whether to raise Tukwila’s minimum wage. (Amanda Snyder/Crosscut)

A voter discusses the minimum wage with field manager George Manning while they canvass a Tukwila neighborhood on Friday, Oct. 28, 2022. Manning is asking voters about Initiative Measure #1, which will decide whether to raise Tukwila’s minimum wage. (Amanda Snyder/Crosscut)

Tukwila, pop. 22,000 or so, is sandwiched between Seattle and SeaTac and is tied to the statewide minimum hourly wage, currently $14.49. It has a diverse population, according to city statistics: 44% of residents are white, 19% are Asian, 18% are Black, 12% are Latinx and 1% are Native American.

And though it is tiny, Tukwila is home to lots of airport- and hospitality-related jobs, said Wilson, and to Westfield Southcenter Mall.

The Seattle Southside Chamber of Commerce didn’t respond to a request for comment, and inquiries to the corporate offices of Macy’s and JC Penneys – which have stores at the mall – were not returned. A voicemail left for Hot Topic’s corporate upper echelons likewise went unanswered.

It probably doesn’t hurt the minimum-wage proposal that Puget Sound’s economy is booming. Unemployment last month in King County was 2.9%, not seasonally adjusted, according to state figures. Washington’s statewide unemployment rate was 3.7%. And Tukwila employers are competing for employees with higher-paying businesses in SeaTac and Seattle.

Meanwhile, the region’s soaring housing and rental costs put a middle-class life beyond the reach of many workers.

If passed, Proposition 1 would begin to kick in on July 1, 2023, when a minimum wage for businesses with 500 or more employees worldwide would rise to nearly $19 per hour, Wilson said. That’s about on par with where Seattle’s minimum wage will rise to next year: $18.63 per hour.

Smaller employers have a phased-in schedule that would allow them to gradually raise wages, according to the measure’s text. In future years, the wage would rise with the annual inflation rate as figured by the Seattle-Tacoma-Bellevue Area CPI-W.

Employers with fewer than 15 workers with less than $2 million gross annual revenue would be exempt from the measure.

“At this moment, we do have an overheated labor market,” said Dashkeev, adding: “And we’re in the situation of labor shortage, that’s what’s provoking this tight labor market and very low unemployment.”

He credited the COVID-19 pandemic, which prompted a chunk of people around the nation to retire early. As many as four million Americans left the nationwide workforce due to lingering illness from the virus, according to one estimate.

Dashkeev cautioned that many forecasts are predicting an economic recession next year, when Proposition 1 would take effect. More abstractly, rising wages could intertwine with rising prices for gas, groceries and consumer goods – if they keep going up – and could contribute to further inflation.

“And this of course is an issue, because this will lead to new requests for higher wages,” he said, encouraging a price spiral.