WA Republicans are pushing this write-in for Secretary of State

State Rep. Brad Klippert, who has been skeptical of the state's voting system, is campaigning after the GOP was shut out in the August primary. 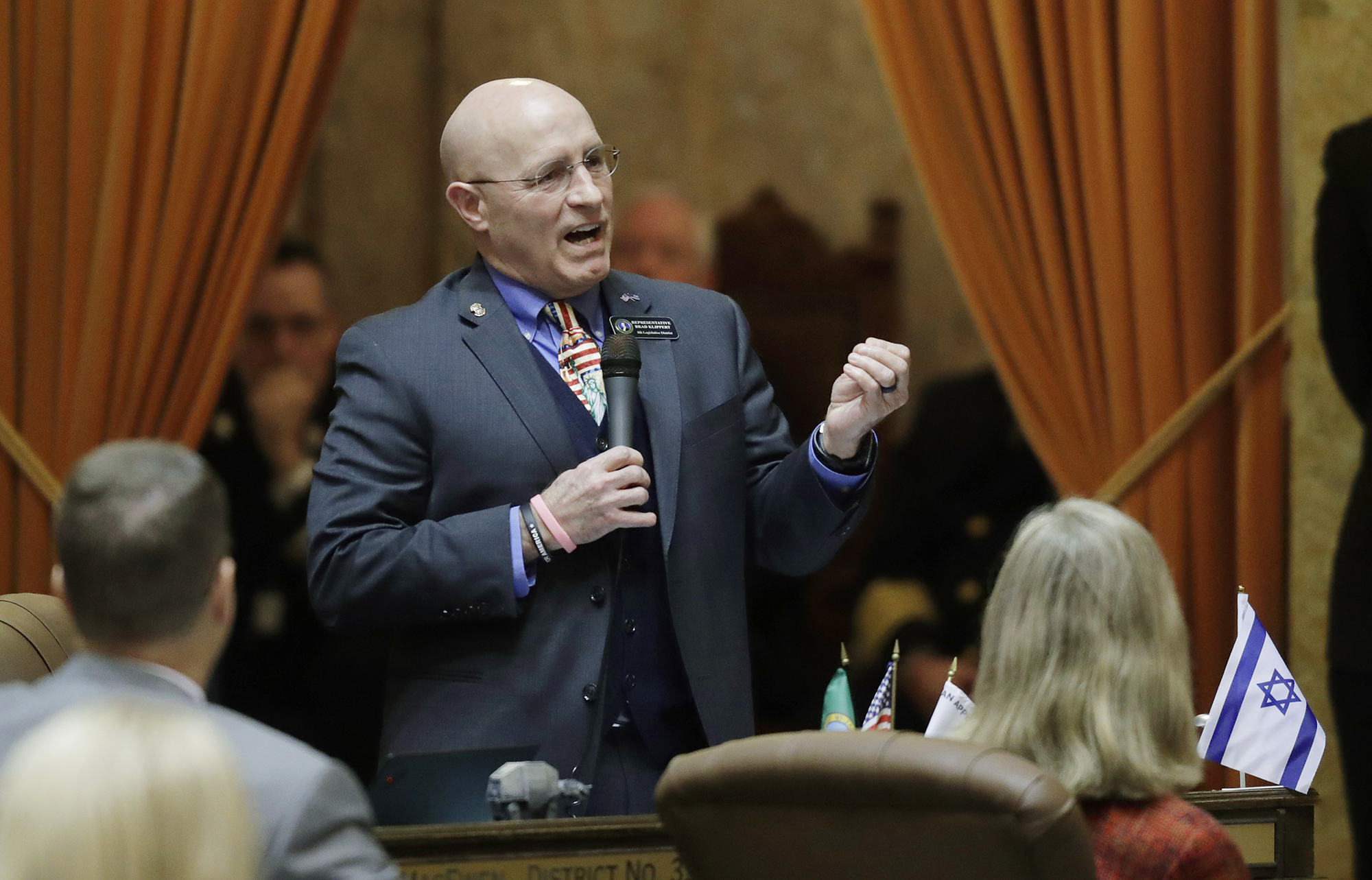 The campaign for Washington’s top elections official has largely skirted the proverbial elephant in the room: the voters, egged on by some politicians and candidates, who increasingly believe the state’s elections are rife with widespread fraud.

Klippert’s bid comes after right-leaning voters split among several conservative candidates in the August primary, leaving the GOP off the ballot for a statewide race they’ve won for decades.

Voters instead chose Hobbs, a moderate Democrat and former Snohomish County lawmaker, along with Anderson, an experienced local elections official who is running as a nonpartisan, to appear on the Nov. 8 ballot.

A conservative lawmaker and Benton County sheriff’s deputy, Klippert has been focusing on unfounded election-fraud conspiracies after the losses of President Donald Trump and GOP candidate for governor Loren Culp in 2020 at the ballot box.

First elected to the state House in 2008, Klippert was a longtime senior member of the House Public Safety Committee. He opted not to run again this year to instead challenge U.S. Rep. Dan Newhouse, a fellow Republican who voted last year to impeach Trump in Congress after the insurrection at the U.S. Capitol. Newhouse prevailed in the August primary over both Klippert and Culp, who likewise challenged the congressman.

Klippert’s write-in campaign also highlights the deepening fissures in the Washington Republican party. The moderate bloc for years managed to elect statewide candidates, despite Washington’s progressive lean, and even helped take control of the state Senate between 2013 and 2017. Hard-line conservatives don’t fare as well in the state’s most populous counties or in statewide races.

Write-in campaigns are often longshot bids, but in an interview, Klippert said he’s running to win. And he’s not on his own: Klippert has the support of several county-level GOP organizations and the Washington State Republican Party, which hailed his “strong record of serving and fighting for the residents of Washington.”

If elected, Klippert would seek to scrap Washington’s vote-by-mail system: “You're going to go back to the polls, vote on a paper ballot, paper and pen, and in-person observers.”

“We do not have a secure election process in Washington state, nor do we have a transparent process,” said Klippert, 65.

Klippert was also motivated to run, he said, because he is concerned that Anderson or any other secretary of state might ultimately want to implement ranked-choice voting in Washington.“And the citizens of Washington state deserve a process that is not complicated or confusing,” he said.

In the August primary, a quartet of conservative candidates split roughly 40% of the vote. That dynamic allowed Anderson to grab the second spot for the November ballot. For the primary, Klippert said he supported the bids of state Sen. Keith Wagoner, R-Sedro Woolley, and former Sen. Mark Miloscia, R-Federal Way.

Wagoner and Miloscia both campaigned on eliminating the possibility of fraud, but they also acknowledged that the notion of widespread fraud in Washington in 2020 did not comport with reality.

Klippert has gone in a different direction, using tax dollars to travel to a South Dakota election symposium where Trump supporter Mike Lindell promised to show “irrefutable proof” that Chinese hackers stole the election from the former president, according to The Seattle Times. The event ended with the cyber expert hired by Lindell himself to review data declared that the claims could not be substantiated, according to the Washington Times.

While no election system is perfect and extremely small numbers of fraudulent or incorrect ballots are discovered, Washington’s system is considered one of the more safe and secure in the nation. The extended voting period allows local elections officials extra time to verify that returned ballots have the proper signatures, and to resolve mistakes or irregularities.

The mere presence of mail ballots allows for manual recounts after the fact, in contrast to electronic voting. The computers that tabulate Washington election results aren’t hooked up to the internet. Residents can even visit their county auditor office and observe the local elections process for themselves.

Nearly all of the lawsuits around the nation challenging Trump’s election loss were dismissed, some by Trump-appointed judges. After his 2020 election loss, Culp sued fellow Republican and then-Secretary of State Kim Wyman, alleging widespread election fraud in his race. But Culp withdrew his lawsuit last year after Attorney General Bob Ferguson announced he would seek penalties for filing meritless claims in a court of law.

Similarly, a nonprofit organization and its attorney earlier this year were fined by the state Supreme Court for submitting meritless claims alleging widespread voter fraud, according to The Seattle Times.

As evidence of fraud, Klippert in his interview repeated one debunked claim that has been circulating: that Snohomish County in 2020 received 29,000 more general-election ballots than it sent out to voters in the first place.

That inaccurate analysis came from a comparison of two different types of voter lists requested by a county Republican official who then tried to match up those lists, according to Snohomish County Auditor Garth Fell. That claim was also made before the Republican official in question received all the files they had asked for from the county through a public records request, Fell added.

The allegation purported to show fraud by documenting that more ballots came in than could possibly have been issued to eligible voters. But under state law, voters living overseas or serving in the military are allowed to vote electronically and wouldn’t necessarily have ballots printed for them, Fell said. Additionally, some ballots are printed that voters can pick up in-person, like for someone registering to vote for the first time.

Snohomish County’s own analysis of the Republican official’s claim showed about 5,000 ballots that weren’t printed specifically for a voter, Fell said. That is broadly in line with the number of military and overseas voters and of people getting a ballot in-person for a presidential election year, he added.

Fell – who isn’t endorsing any candidate in this year’s secretary of state race – said he and other elections officials are happy to walk through any claims that leave voters feeling skeptical.

Hobbs has touted his own efforts to dispel election disinformation since being appointed secretary of state last year, and his experience as a lieutenant colonel in the Washington National Guard.

In a statement via his campaign, Hobbs said it was "deeply upsetting that Representative Klippert has become a mainstay at misinformation-fests promoted by the My Pillow Guy that erode public confidence in our democracy.”

“I assure voters that their ballots are secure and that their voices matter in our democracy,” he added.

Anderson, who was first elected Pierce County Auditor in 2009 and as such has run more than a decade of elections in Washington’s second-biggest county, said she is not surprised about Klippert’s entrance.

Since she is a nonpartisan candidate – and is calling for the secretary of state to be turned into a nonpartisan position – Anderson said she’s being targeted by both the major parties.

Anderson dismissed Klippert’s claim on ranked-choice voting, saying: “That's not what I'm promoting at all, and that's a really big step for Washington.”

But she does support the rights of local governments to conduct their own elections with the process if they want, Anderson said, and she supports a bill in the Legislature that would allow the option.

“I think the local option is an important part of Americanism,” she said.