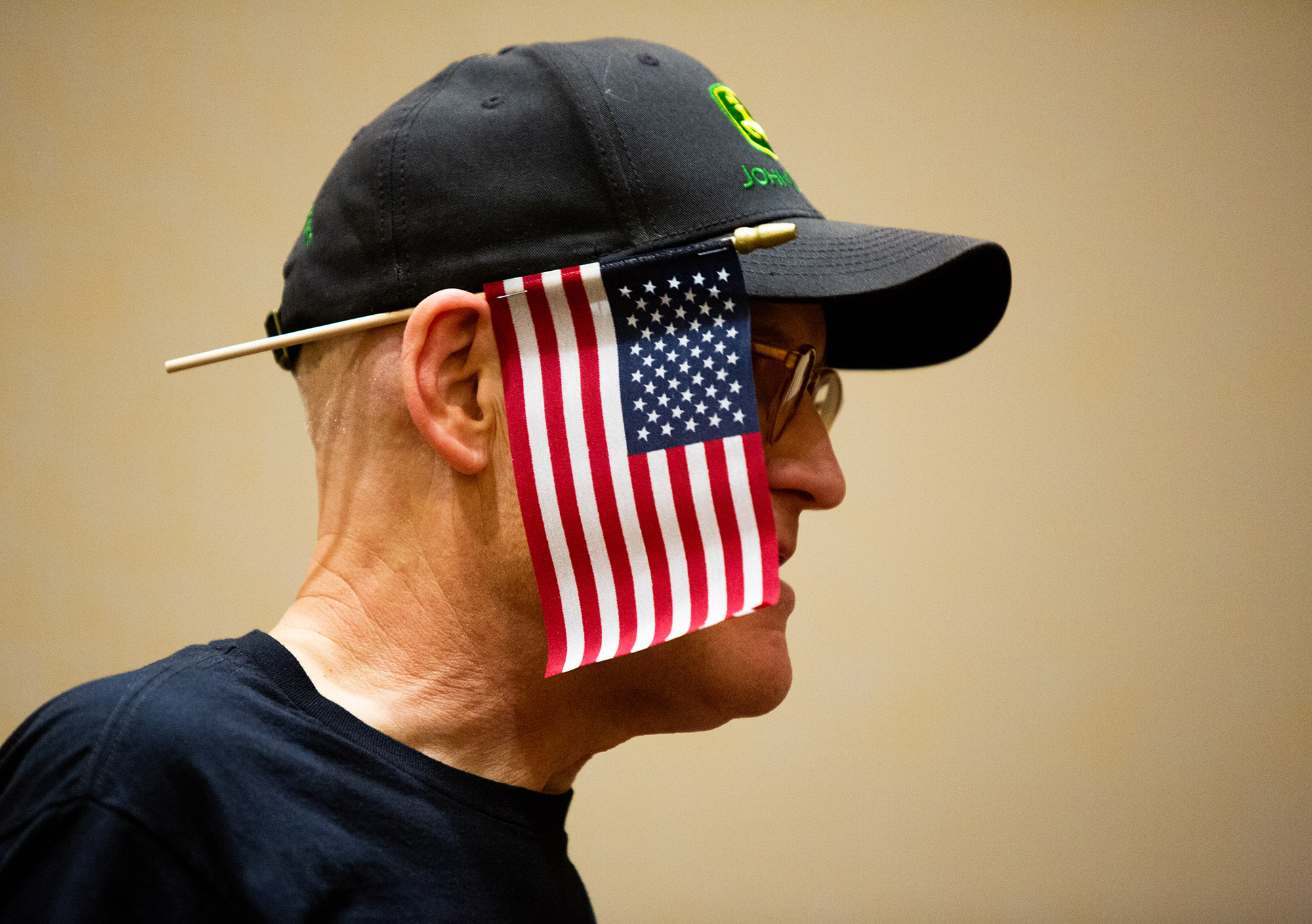 An attendee wears an American flag on his ear at the Washington State Republicans election-night watch party Tuesday, Nov. 8, 2022, at the Hyatt Regency in Bellevue. (Lindsey Wasson/Crosscut)

As he stepped up last week to speak at a town hall, Brett Simpson didn’t wait long to tell the crowd who he was. To loud cheers, Simpson, who was running for Clark County auditor, told the crowd: “I’m your local election denier.”

But the roughly 65 people gathered last Thursday in Ridgefield to hear Simpson after a southwest Washington town hall for Republican Joe Kent don’t seem to be representative of the broader electorate.

Election skeptics in Washington had a tough night. Republicans who have played up and campaigned on tales of election fraud aren’t doing well – at least so far.

Challengers campaigning for county auditor – the local offices that conduct elections by mailing, receiving, verifying and counting ballots – who have questioned the election system are also trailing in Mason, Pend Oreille and Spokane counties.

As in Kimsey’s race, the contest in Pend Oreille is not close, with County Auditor Marianne Nichols leading a challenger by a nearly 3-to-1 vote margin. But the contests in Mason County and Spokane County – where GOP Rep. Bob McCaslin is challenging Auditor Vicky Dalton –  remain close. Those outcomes could still flip in the coming days.

Meanwhile, two Republican state lawmakers who have talked up election fraud – Reps. Robert Sutherland of Granite Falls and Rod Chase of Spokane Valley – were trailing challengers from within their own party. Sutherland used taxpayer dollars to attend the MyPillow election symposium last year in South Dakota, while Chase helped organize an Idaho event that promoted tales of election fraud.

Kent – who has vowed to use congressional authority to investigate the 2020 elections – is trailing Democrat Marie Gluesenkamp Perez by almost six points in his bid for Washington’s 3rd Congressional District seat. That’s still close enough for the results to change as more ballots come in and are tallied in the coming days.

And state Rep. Brad Klippert, the Republican from Kennewick who ran a write-in campaign for secretary of state after the GOP got shut out in the August primary, is sitting somewhere at or below 3%. That’s after Klippert got the endorsements of the Washington State Republican Party and the King County Republican Party.

In that race, appointed Democratic Secretary of State Steve Hobbs is leading nonpartisan challenger Julie Anderson, 50% to 47% in initial results. The 3% of write-in ballots, meanwhile, are not yet broken out by name and may not all be for Klippert.

Those results mirror the difficulties of other notable candidates around the nation who have questioned the 2020 election results, said longtime Washington pollster Stuart Elway. He pointed to the loss of Mehmet Oz in Pennsylvania’s U.S. Senate race and Republican Kari Lake’s trailing numbers in the Arizona governor race. The Arizona race, however, remains too close to call.

“Most of the election deniers are not winning,” said Elway. “And if that carries down to these local races, too, then that's going to be a big message to the Republican Party to move on from that message.”