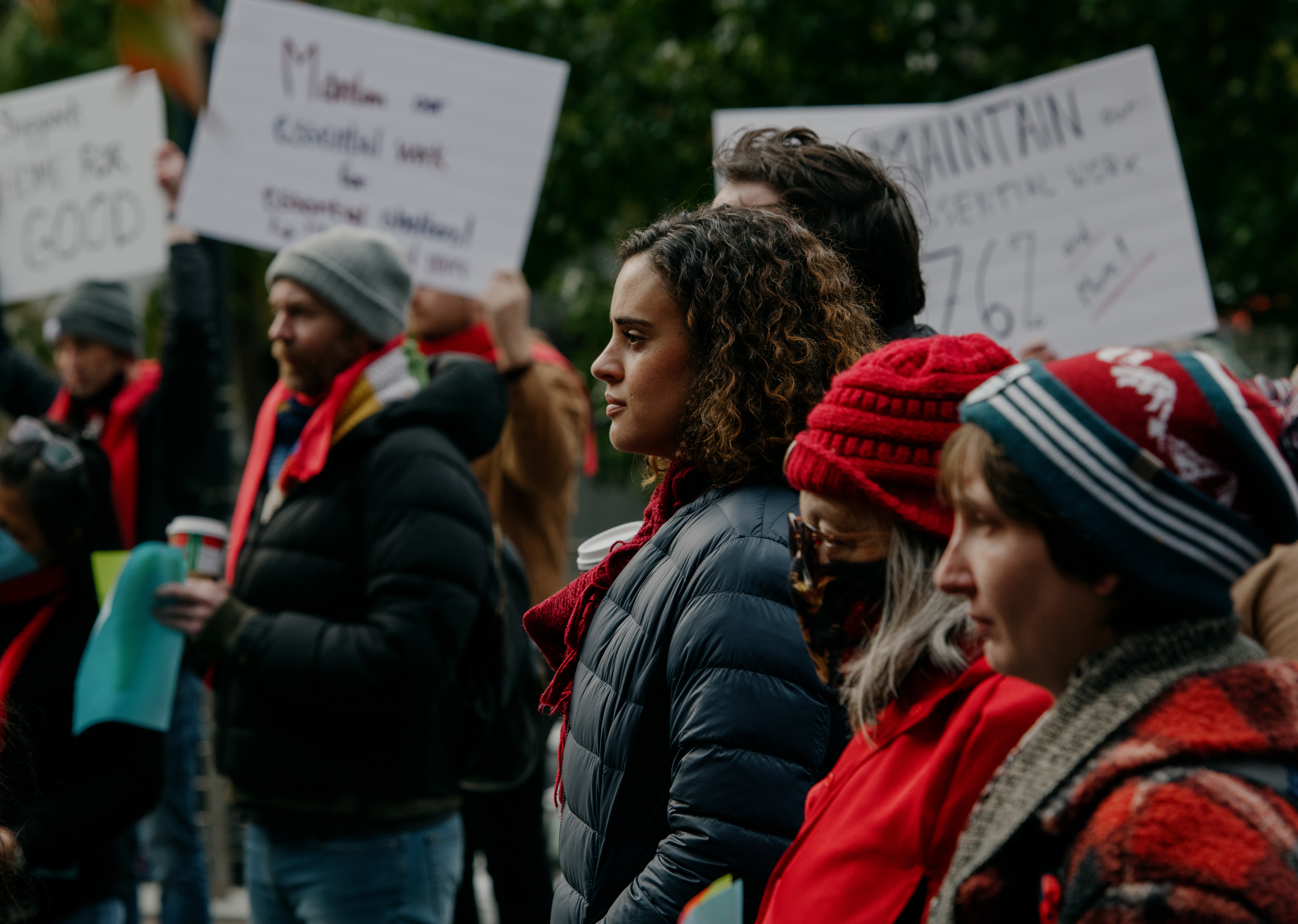 Kyle Lane of the Low Income Housing Institute, center, rallies with Seattle human-services providers as they request an increase in wages at the Seattle City Hall plaza on Tuesday, November 8, 2022. City council budget chair Teresa Mosqueda and councilmember Lisa Herbold committed to ensuring a 7.6% raise for human-service contracts to match inflation. In his proposed budget, Mayor Bruce Harrell capped the contract increase at 4% to save money. (Grant Hindsley/Crosscut)

The city of Seattle’s most recent revenue forecast paints a grim picture for city coffers over the next three years. The city’s Revenue and Forecast Council’s November report estimated that Seattle will face an additional $82.3 million revenue shortfall on top of the $141 million general-fund deficit the city had already expected to face in its 2023-2024 budget.

The new forecast comes in the final weeks of the city budget process. The city council was already working to balance its priorities with those of the mayor, while attempting to shore up that original $141 million hole in the general fund.

The additional $82.3 million deficit all but guarantees some projects and programs will go unfunded in the next few years, especially capital infrastructure projects.

Real estate is the main culprit for Seattle’s additional budget woes. The city gets a significant amount of money from the Real Estate Excise Tax (REET), a tax on the sale price of a residential or commercial property.

Higher interest rates have impacted REET revenues twice over. As mortgage interest rates have risen and buying power has dipped, sellers have reduced their asking price. On top of that, the volume of sales has dropped dramatically. Fewer property sales at lower prices means less tax revenue for the city.

Earlier forecasts estimated the city would see more than $106 million in REET revenue in 2022. Now the forecast council predicts REET will bring in around $95 million this year, an $11 million drop. Between now and the end of 2024, forecasters estimate it will bring in a total of $64 million less than previously predicted. 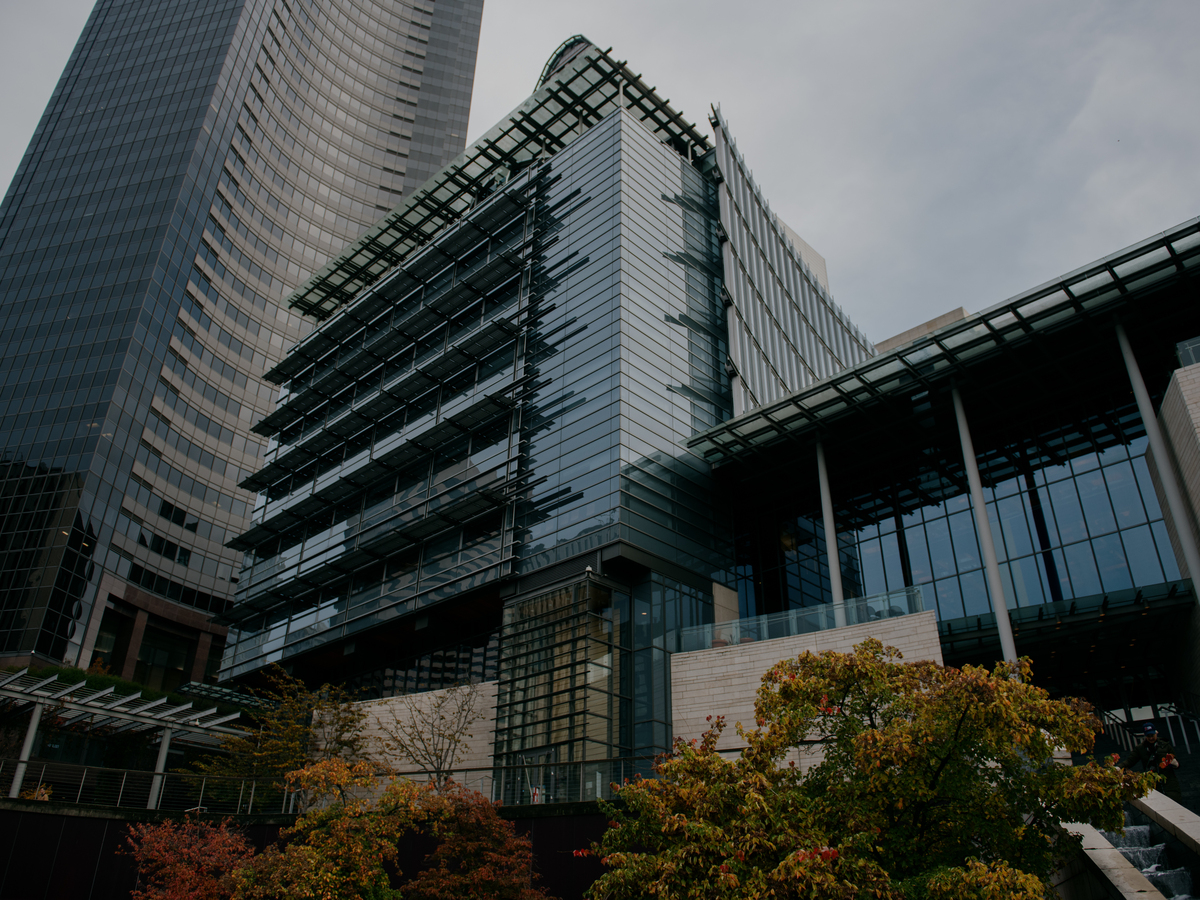 Seattle City Hall on November 8, 2022. The Seattle City Council’s balanced-budget proposal will be released Nov. 14. The council will take its final vote on the 2023-2024 budget on Nov. 29. (Grant Hindsley/Crosscut)

Seattle City Hall on November 8, 2022. The Seattle City Council’s balanced-budget proposal will be released Nov. 14. The council will take its final vote on the 2023-2024 budget on Nov. 29. (Grant Hindsley/Crosscut)

Real estate isn’t the only factor. The city’s sweetened beverage tax will come up $4.49 million short by 2024. A shortfall of retail sales, Business and Occupation taxes and other revenue will add another $9.37 to the general-fund deficit. Vehicle license fees and commercial parking taxes will contribute $1 million and $3.47 million respectively to the shortfall.

The city relies heavily on REET to pay for capital infrastructure projects — a category that includes a wide variety of construction such as bridge repairs, bus rapid-transit corridors, street paving and bicycle and pedestrian improvements.

City council budget chair Teresa Mosqueda said capital infrastructure projects funded by REET are the most likely to be cut in the 2023-2024 budget. The council’s final budget proposal has not been released, but Mosqueda said she hopes to find money for capital infrastructure projects already in progress or soon to be underway, while shelving longer-term projects until the city’s finances improve.

“There’s no way to make up a $64 million reduction with a general fund that’s already been stretched to its max, given that we don’t have additional federal investments,” Mosqueda explained.

Despite the additional budget shortfall, Mosqueda has maintained her commitment to staving off austerity measures for social services such as homeless outreach, shelter and affordable housing, domestic-violence assistance, youth counseling and more.

Mosqueda spoke at a rally outside City Hall on Tuesday morning along with her colleague Councilmember Lisa Herbold at which they committed to ensuring a 7.6% raise for human-service contracts to match inflation. 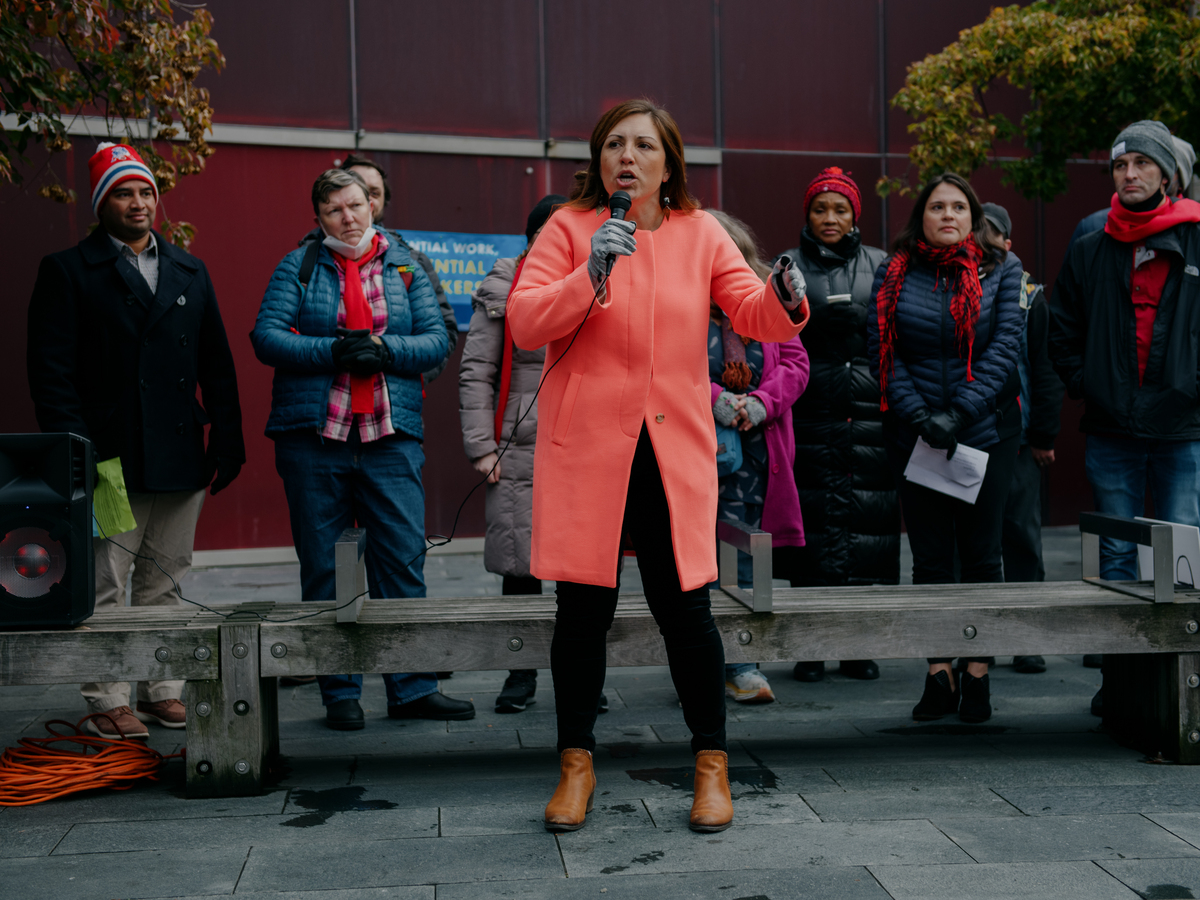 But the budget news is not all bad. The new Jumpstart payroll tax on big business has outperformed projections so far, raising $292 million in 2021, about $92 million above what was forecast.

Jumpstart tax revenue is earmarked for affordable housing, homelessness, climate initiatives and small business support. The mayor and council have both proposed allowing it to be used for a broader array of things in the 2023-2024 budget, including shoring up the general-fund deficit. As such, Jumpstart likely won’t help much with the additional budget shortfall this next biennium.

Asked for comment on the more dire budget forecast and how it might impact Harrell’s priorities, the mayor’s office provided a written statement: “The mayor’s proposed budget makes critical investments in key priority areas including public safety, housing and homelessness, and the essential city services residents expect. Based on our collaboration throughout this process, we believe the Council will ensure these priorities remain adequately funded in the final budget.”

If current conditions hold, the Revenue and Forecast Council expects the downturn to be relatively short-lived, with recovery beginning by mid-2023. But they predict that recovery will be fairly slow, with the city not returning to current employment levels until 2025.

In response to the new budget forecast, the city council has delayed its budget process by an additional week. The council’s balanced-budget proposal will be released Nov. 14. The council will take its final vote on the 2023-2024 budget on Nov 29.

CORRECTION: This article has been updated with the correct figure for 2021 Jumpstart tax revenue. 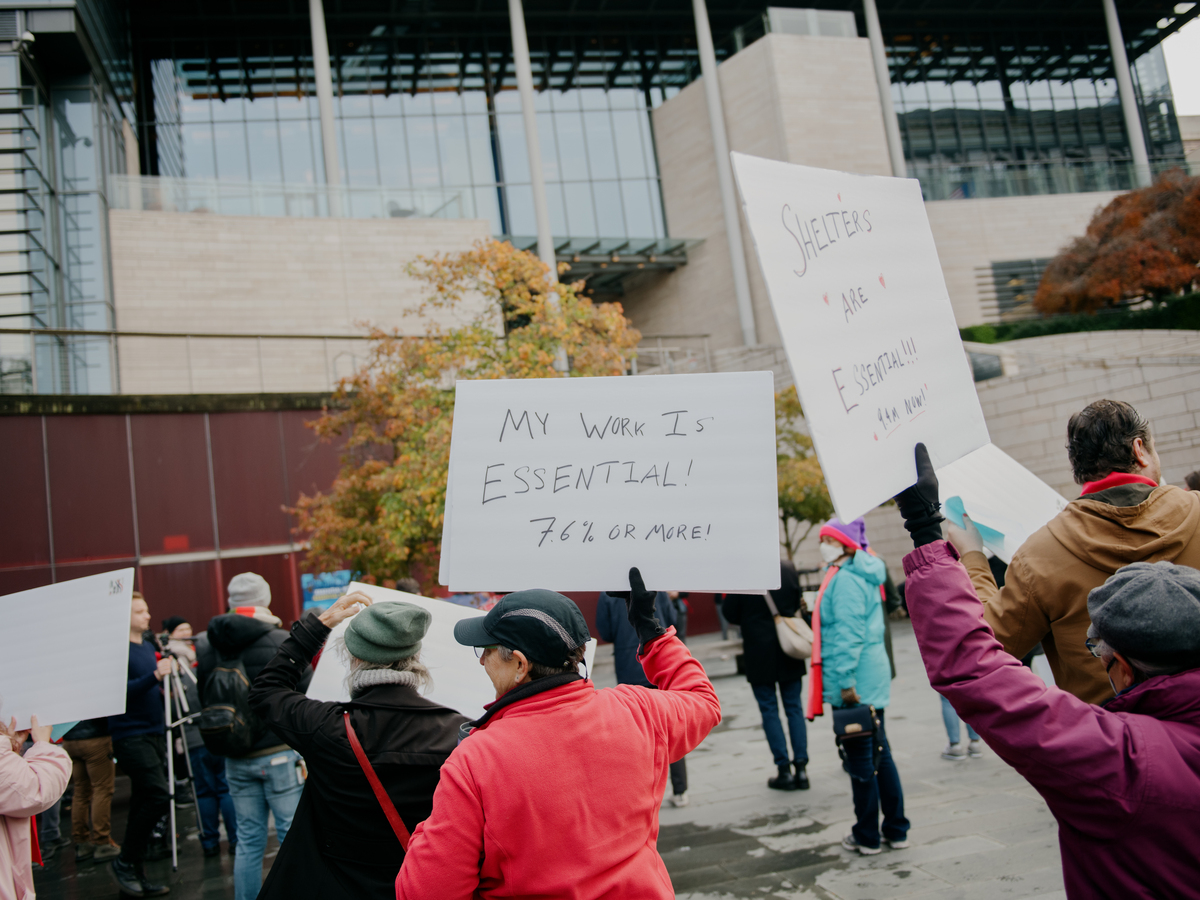 Human-services workers gather at the Seattle City Hall plaza to rally for increased wages that will cover inflation, at a minimum, on Tuesday, November 8, 2022. (Grant Hindsley/Crosscut)

Human-services workers gather at the Seattle City Hall plaza to rally for increased wages that will cover inflation, at a minimum, on Tuesday, November 8, 2022. (Grant Hindsley/Crosscut)