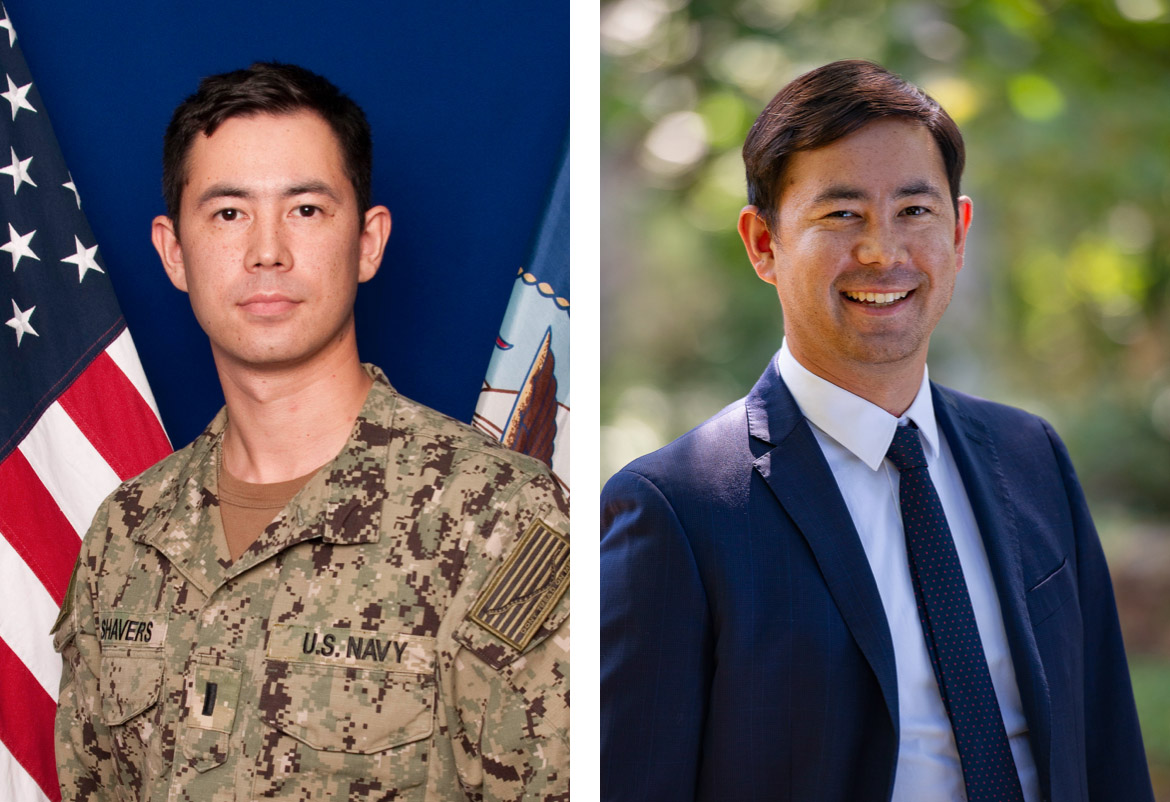 Among Washington Democrats, Clyde Shavers could be called “a good fit” for the military-heavy 10th Legislative District: a veteran, nuclear submarine officer, attorney and advocate. And Shavers has put that story to good use, referring to a career as a submariner in his big-dollar campaign to unseat state Rep. Greg Gilday, R-Camano.

It’s a story that can be found on an archived version of Shavers’ campaign website: “For more than 8 years, he served as a nuclear submarine officer and public affairs officer with tours in the Middle East and Southeast Asia.”

But that narrative deflated this week, after Shavers’ father, Brett Shavers, penned a letter detailing how the candidate never served on a submarine and isn’t yet an attorney. In a statement, Shavers acknowledged not serving on a submarine and not being an attorney despite having described himself as one in a state disclosure filing. But he questioned his father’s political motives – and called for healing and moving forward.

The episode arrives in the closing stretch of a major push by Democrats to unseat Gilday –  perhaps the most vulnerable House Republican – and boost their majorities in the Legislature. The race is playing out in one of the rare districts currently electing both Democrats and Republicans to Olympia. The 10th Legislative District includes Island County as well as parts of Skagit and Snohomish counties.

The Democratic push has come with big money, too. Shavers’ campaign so far brought in more than $475,000, according to the Public Disclosure Commission, nearly half from Democratic Party committees. That boost put his campaign in the top-10 state campaigns this year for fundraising.

And then came the letter by Brett Shavers.

“Clyde was never a submarine officer, not even for a day,” reads his letter. “Prior to Clyde’s announcement to run for office, he had asked me how to explain his failure of the submarine officer pipeline training.”

“I stressed to Clyde that he must be truthful and simply state that he went through the many weeks of training,” the father added. “Yet, as seen in campaign materials, Clyde chose instead to claim that he was a submarine officer.”

On Tuesday, The Daily Herald of Everett – which first reported the story – withdrew its endorsement of Shavers. The paper then moved to back Gilday, an attorney and businessman first elected in 2020.

Meanwhile, on Tuesday the chair of the House Democratic Campaign Committee – which had contributed more than $100,000 to the campaign – admonished Shavers.

“I would say that he was insufficiently clear in how he has described several aspects of his experience,” said Rep. Joe Fitzgibbon, D-West Seattle. “Our expectation is that candidates be completely clear and accurate.”

Asked whether House Democrats are still backing Shavers, Fitzgibbon indicated that the question is sort of moot, given that most campaign spending has been distributed at this late stage of the election.

“I hope he's successful,” said Fitzgibbon, who had not spoken to Shavers but had been briefed by the candidate’s campaign. But, “Prospectively, we would expect that he would be more clear in talking about all aspects of his work.”

In a statement, Washington State Republican Party spokesperson Ben Gonzalez said Democrats “should immediately rescind their endorsement of his campaign with these new revelations coming to light, but they won’t because all they care about is political power.”

Hays also called for New Direction PAC, an independent spending committee aligned with Democrats, to pull down its website suggesting Republicans are smearing Shavers by pointing out that he misrepresented himself. New Direction – which is funded largely by Democratic Party and labor-union contributions – has spent about $250,000 this year promoting Shavers.

The PAC has no plans to pull down its website, according to New Direction spokesperson Jared Leopold.

“New Direction PAC will continue to highlight the choice for voters between Clyde Shavers’ plans to stand up for the people of the 10th District and Greg Gilday’s record of standing with anti-abortion and gun lobby special interests," he wrote in an email.

The week’s revelations evoked the 2016 episode of Rep. Graham Hunt, though perhaps not on the same scale. A Republican from Pierce County, Hunt resigned after stories in The Seattle Times revealed he exaggerated his military record, including lying about serving in the Marines and being injured in combat.

Through a campaign spokesperson, Shavers declined an interview request but confirmed the letter was from his father. In the statement, Shavers blamed political differences with his father.

“To be clear, this letter is all about politics,” Shavers said, adding later: “This is the kind of politics that’s tearing apart families and communities, and my campaign is about healing and moving forward.”

Shavers told The Herald that he listed himself as an attorney in a financial-disclosure filing because he didn’t see another option for his work, which is with Perkins Coie, in the drop-down menu on the filing website. A spokesperson for the Public Disclosure Commission said people filing such statements can click “other” in that drop-down menu, and then describe their work.

Requests for comment from Perkins Coie – an international firm with offices in Seattle – were not returned.

In August, Shavers told The Herald editorial board that he was a nuclear submarine officer “for a couple of years,” according to that newspaper’s report, and a mailer from Shavers’ campaign before the August primary repeated that claim.

In his statement, Shavers said that he was "commissioned into the nuclear submarine community after graduating from the U.S. Naval Academy in 2013.”

But, “After facing challenges and realizing that I wasn’t a good fit for this community … I discussed with my supervisor to undergo the process to transfer to a different naval community,” according to the statement. “I served 6 more years in the Navy as a public affairs officer.

“To be clear, I have never said that I deployed on a submarine, but only that I was commissioned as a nuclear submarine officer,” he added.

That explanation hasn’t necessarily sat well with everyone in the military community in the 10th Legislative District.

Terry Sparks, a retired member of the U.S. Navy who served as enlisted crew on a diesel submarine, said he met Shavers last year. Sparks was left with the impression that Shavers had actually served on a nuclear submarine, he said. Sparks said he supported Shavers early in the campaign, but gradually began to question the Democrat’s story – including when Sparks didn’t see Shavers wearing the insignia members earn after qualifying for submarine duty.

“When I started out, some things didn't match up and his timeline didn't make sense, and I didn't see a picture with dolphins on him,” said Sparks, 75. Sparks said he brought his questions to Shavers, but never got answers.

“It's important for us,” said Sparks. “Honor and honesty is something we take very dearly.”