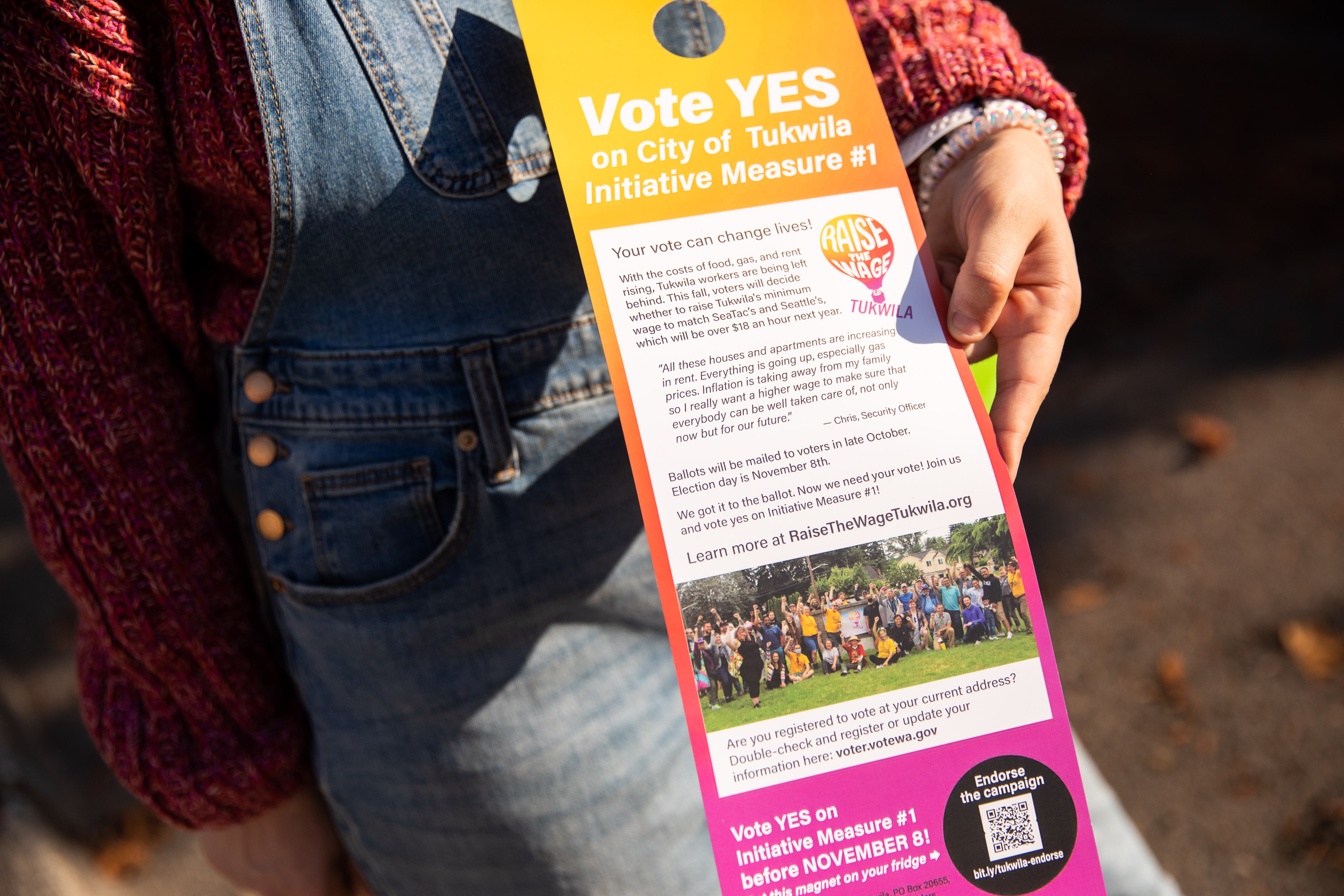 Voters in Tukwila gave their approval to a major increase in the city’s minimum wage, while Seattle seems evenly split about whether to change its voting system from a top-two primary to ranked-choice voting.

As of Friday, Tukwila voters had clearly approved Initiative Measure No. 1 by an enthusiastic 83% to 17%.

The proposal to increase the city’s minimum wage for workers at companies with 15 or more employees would put them and their employees more in line with neighboring cities, including SeaTac and Seattle. Tukwila’s current hourly minimum wage is $14.49 an hour, compared to $17.54 for hospitality and transportation workers in SeaTac and $17.27 for most workers in Seattle.

If approved, the new city ordinance would match SeaTac’s minimum wage for employers with at least 500 employees worldwide, and phase in that wage for companies with at least 15 employees. Companies with fewer employees would be exempt. The campaign in favor of the change says the ordinance could help employers who are already competing for employees with those other cities. For more about this initiative, read this Crosscut story. 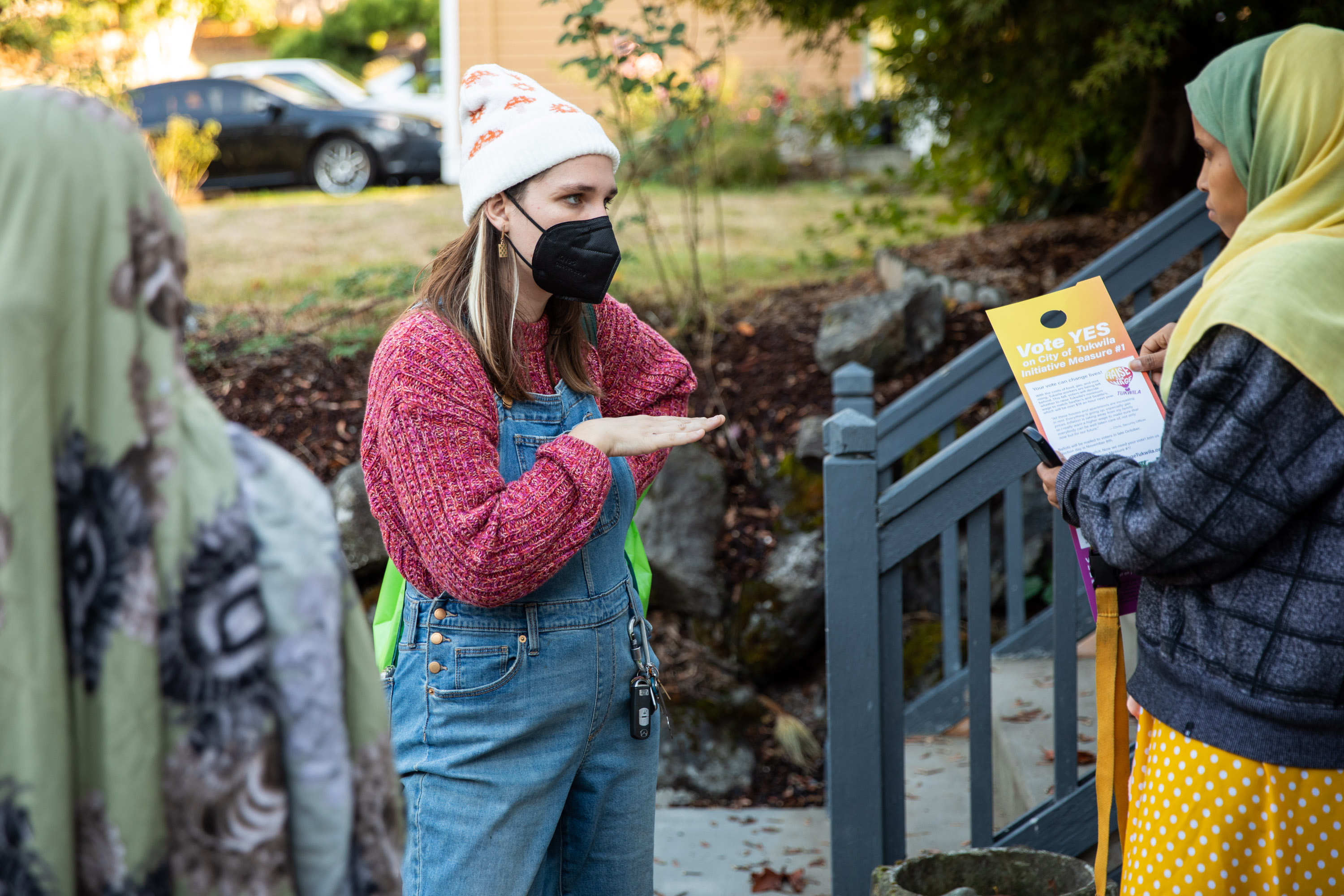 George Manning, left, field manager with the Washington Community Action Network, speaks with a voter while canvassing a Tukwila neighborhood in support of Initiative Measure #1, which will raise the city’s minimum wage, on Friday, Oct. 28, 2022. (Amanda Snyder/Crosscut)

George Manning, left, field manager with the Washington Community Action Network, speaks with a voter while canvassing a Tukwila neighborhood in support of Initiative Measure #1, which will raise the city’s minimum wage, on Friday, Oct. 28, 2022. (Amanda Snyder/Crosscut)

Votes for a Seattle-only proposal to change the way elections are run from the statewide top-two primary to either ranked-choice voting or approval voting was complicated with two questions before the voters. First they were asked to decide whether they wanted to change the format of Seattle’s primary, which was split right down the middle after Friday's vote drop. About 50% of voters indicated they wanted to change the voting system and about 50% said no, with fewer than 1,000 votes separating the two sides.

On the second part of the ballot question, voters could choose which change they preferred, whether they voted for or against changing the system. Election results so far say they would prefer ranked-choice over approval voting by 75% to 25%.

Voters in San Juan County rejected a similar proposal to adopt ranked-choice voting with 43% of ballots supporting the idea.

Another voting “format” question on the King County ballot appears to be passing. As of Friday, King County Charter Amendment No. 1 was ahead by a margin of 70% to 30%.

The proposal would change the King County charter to move all elections for the county offices of executive, assessor, director of elections and councilmembers from odd-numbered to even-numbered years. As this Crosscut story explains, the purpose of the change would be to increase voter turnout for these elections by putting them on the ballot with votes for Congress, the president, governor and state lawmakers.

King County voters are also giving their enthusiastic OK to Proposition No. 1, by a vote tally so far of 69% to 31%. The Conservation Futures Levy would approve a property tax levy rate of $6.25 per $100,000 of assessed valuation in 2023 to pay to acquire and preserve urban green spaces, natural areas, wildlife habitat, trails, river corridors, farmlands and forests. This proposition would restore the levy’s original rate and set the level for future tax collections.

The proposal was put on the ballot by a vote of the King County Council. Supporters of the proposition say it would cost the average homeowner a tax increase of just over $2 a month, with relief available to qualified low-income seniors and other low-income households. Opponents of the proposal call it a land grab by the county and say that the government already owns a lot of land in King County.