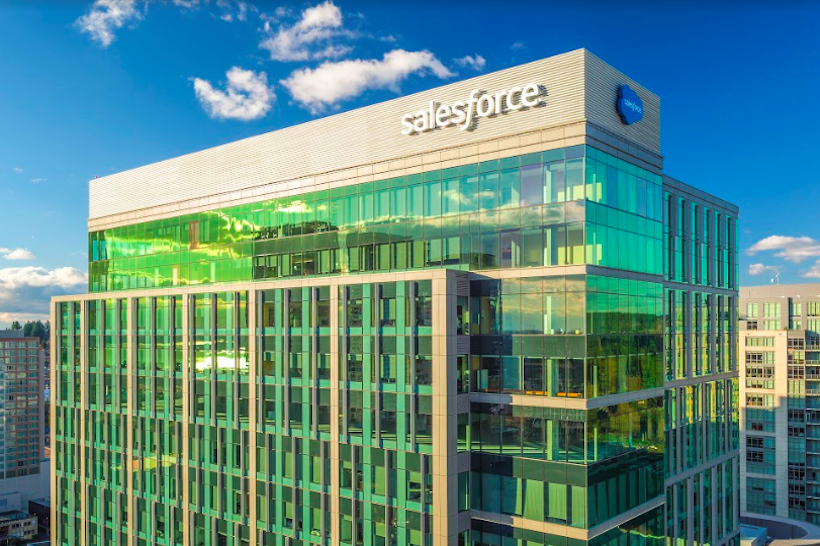 Salesforce’s Bellevue office, which opened in 2017 for more than 3,800 regional employees, is on its way towards achieving LEED Platinum certification. (Photo courtesy of Salesforce)

Salesforce, a major player in customer relationship management, proudly embraces its role in sustainability leadership, and the company’s impact can be felt here in the Pacific Northwest. Not only does Salesforce’s 70,000-square-foot Bellevue outpost house more than 3,800 regional employees, it’s also made waves locally in the field of green building, and further extended its reach into the Northwest in 2019, when the company acquired Seattle-based Tableau Software.

At a time when climate change stakes are critically high and governments are often slow to act, corporations increasingly must take action instead of waiting on state policies to materialize. “At Salesforce, we have been on a sustainability transformation journey for over a decade,” says Vice President and Global Head of Sustainability Patrick Flynn, “and we have long been committed to setting ambitious climate targets and supporting progressive public policy to drive climate action.”

The company recently announced that it reached net zero across its full business model, meaning it has offset greenhouse gas emissions, and has achieved 100% renewable energy for its operations. The team has developed emissions reductions strategies in four key categories — work from anywhere, infrastructure, business travel and supply chain. “We are bringing the full power of Salesforce to create a sustainable future by accelerating the world’s largest businesses to net zero; sequestering 100 gigatons of carbon through conserving, restoring and growing 1 trillion trees; protecting our oceans; [and] energizing the ecopreneur revolution,” says Flynn.

By sharing its own discoveries, the company is also working to get the world’s largest businesses to net zero faster. “Our Climate Action Plan is a blueprint for others and aligns to a 1.5°C [limit on global warming] by focusing on six sustainability priorities: emissions reduction, carbon removal, 1 trillion trees and ecosystem restoration, education and mobilization, innovation, and regulation and policy,” says Flynn.

In addition to groundbreaking initiatives like including climate as a part of the company public policy platform and Sustainability Cloud analytics allowing companies to track carbon emissions, Salesforce has committed to integrating green building practices within its real estate strategy. Currently, 74% of Salesforce spaces have earned or are pursuing green building certification, with the Salesforce Tower in San Francisco, the company’s most sustainable building, serving as a roadmap for green building around the world.

Amanda von Almen, Head of Sustainable Built Environment at Salesforce, has dedicated the last six years to making the company’s real estate team a template for innovative and streamlined sustainability. Salesforce follows one central design standard for all of its buildings. “No matter where in the globe, we want [the buildings] to embody our values and sustainability goals and commitment to community,” she says.

Since each site is unique, von Almen is involved in the entire green building process, from consulting and certification to supply chain engagement and sustainable operations like waste management and energy management. At this point, they have the end-to-end process dialed in, and Salesforce makes its eco-friendly intentions clear from the initial contract phase. “It’s important to be able to see the full life cycle, versus just the construction.” von Almen says.

The company adapts existing spaces, preparing them for green certification. “We can set the example for tenant fit-outs,” von Almen says. “It’s important to be able to see the full life cycle, versus just the construction.”

Before the COVID-19 pandemic, Salesforce was building at a rapid rate, but still managed to streamline the cost of LEED and become far more intentional about which credits to pursue. This was all possible, von Almen says, without any “Herculean effort” or simply tackling “easy, low-hanging fruit.” Take their Bellevue building, which opened in 2017. Though initially intended to be LEED Gold-certified, the company exceeded that goal when it learned full LEED Platinum certification was within reach.

Salesforce evaluates local, high-quality, renewable energy options and chooses the ones that drive the most environmental impact. “While we have a broad-reach approach, we try to reach local, too,” von Almen says.

In states like Washington, Salesforce has found like-minded advocates for green building practices. State Representative Joe Fitzgibbon, widely considered one of Washington’s leading voices on sustainability and climate change, is one of them. He says it’s imperative for cities like Seattle to lead the work of mitigating the effects of climate change. “All cities face distinct climate threats, but for cities at sea level, these threats are particularly clear and imminent,” he says.

Policies like House Bill 1257 align with Salesforce’s own construction efforts. The company’s Bellevue project was one of the first buildings to incorporate the company’s Healthy and Sustainable Materials Program. Testing the building’s initial indoor air quality, for example, led Salesforce to collaborate with the landlord to choose a different concrete sealer, an undertaking that demonstrates the team’s philosophy of pursuing the greenest standard possible. Salesforce was not willing to just settle on Gold with this site, von Almen says. Going for Platinum “was achievable — and the right thing to do.”

A recently published white paper shows that Salesforce has also made significant progress in cutting greenhouse gas emissions from the manufacturing, transportation, installation, maintenance and disposal of building materials, also known as embodied carbon. They saw initial success by reducing operational energy use by 30% and embodied carbon emissions by 20% with overall ambitious goals to continue over the next 10 years*.

“We know it won’t be easy, but it’s important to lead the way in embodied carbon,” von Almen says.

In general, sharing metrics seems the best way to show other interested companies that Salesforce’s eco-conscious efforts can work. Salesforce is all about transparency, von Almen says, and she loves conversing with customers about how they can make sustainable adjustments, too. When it comes to supply chain implementation, von Almen is inspired to see how the company can take it to the whole business — not just within real estate.

Salesforce has influential counterparts in companies like Microsoft, and von Almen is actively working to figure out how to join forces. “We don’t feel we’re doing our job if it’s all in-house, and then we call it a day,” she says.

As companies push for net zero and renewable energy, says Representative Fitzgibbon, these policy goals become a significant driver of rapid decarbonization of electricity. “Electric utilities tell me that the two biggest factors making them decarbonize are state-level climate laws and increasing demands from their customers for zero carbon energy,” he comments. “Tech companies like Salesforce that use a lot of electricity are at the leading edge of this trend.”

Looking ahead, Vice President for Sustainability Flynn is excited about the future customer-supplier relationship. “Customers are going to increasingly choose to do business with companies that share their values,” he says. “Operational excellence is no longer enough, and every company needs to do work beyond their four walls. This means that your customers are counting on their suppliers — your company — to play a part in enhancing their own reputation.”

Representative Fitzgibbon agrees that customers must demand businesses they work with demonstrate progress on sustainability. “Businesses that are looking to show their sustainability leadership should add their voices to public policy discussions — both at the state and local level — when policies to require faster building decarbonization are under consideration,” he says.

“Nothing is going to test the navigational prowess of every company like climate change,” Flynn says. “And in that journey, the customer will be the guide. We each need to find our most climate-engaged customer right now, because tomorrow there will be many more just like them.”

* An earlier version of this article inaccurately stated initial emission reduction goals. We regret the error.

Salesforce is the No. 1 CRM, and the fastest enterprise software company to exceed $21.25 billion USD in annual revenue. Salesforce is a cloud computing company covering customer relationship management and other business-focused software to businesses, governments and other organizations around the world. Salesforce employs 75,000 people in more than 100 offices across 25+ countries around the world. Salesforce’s ecosystem of customers and partners will create 9.3 million jobs and contribute $1.6 trillion in GDP worldwide by 2026, according to IDC.