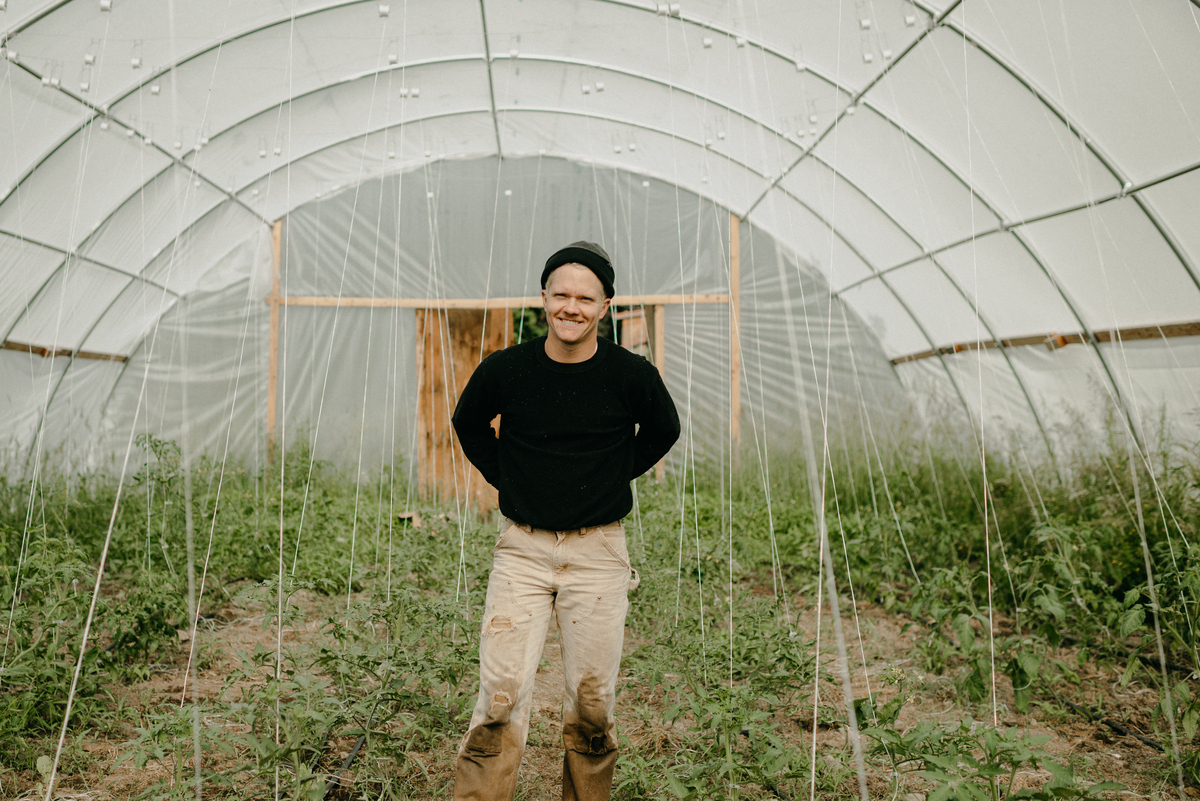 Grayson Crane, a first generation farmer and owner and operator of Pink Moon Farms. The farm received a Ready for Business grant in 2021, which enabled Crane to build fencing to protect the crops.

On an August night in 2021, deer wandered into the cropland of Chubby Bunny Farm in Arlington, destroying 800 tomato plants. A devastating blow for any small farm, it was made more painful by lingering impacts of the COVID-19 pandemic.

“It’s a season worth of work, and then deer come through and destroy everything,” said Michael Deitering, co-owner and operator of the farm.

But deer will no longer be snacking on Chubby Bunny’s tomatoes. That’s thanks in part to a grant from the  Ready for Business Fund, which Chubby Bunny and other farms and small businesses received in 2020 and 2021.

Deitering runs the farm with his wife in Arlington, where they grow a variety of produce and raise chickens and pigs. He started the farm in 2017 as a second career, and is now a first-generation farmer.

To prevent future deer invasions, Chubby Bunny used the grant money to put up fencing, which can be a major one-time expense for small farmers. Since the fence was installed, the farm hasn’t had a single deer wander into the fields.

The Ready for Business Fund was started in 2020 through a partnership between internet-service provider Comcast and the GSBA, Washington’s LGBTQ+ and allied chamber of commerce,, representing over 1,300 small businesses, corporate and nonprofit members.

Originally, the grant was intended to fund specific commercial districts in Seattle that were hit the hardest. But it’s now available to all businesses, with a focus on those led by LGBTQ+ owners, women, and people of color, and businesses in rural areas. Small business owners may apply for this year’s Ready for Business Fund grants now through June 26, at GSBA’s website.

“Our mission at GSBA is to ensure and elevate economic prosperity for the LGBTQ+ community,” said the organization’s’s deputy director Ilona Lohrey.

When the pandemic was just taking hold across Washington in early 2020, Lohrey said GSBA noticed their business members struggling. “We really saw the incredible need in the small business community with the start of the pandemic,” Lohrey said. “We put our heads together and landed on this idea of how we can best support small businesses in the community.”

Comcast had always been a supportive partner in GSBA’s work, and so the two organizations joined forces to help small businesses get through. Diem Ly, director of community impact for Comcast, said the experience of watching many small businesses hit hard by the pandemic made her think differently about them. “We just saw all of our beloved commercial districts and small businesses just falling by the wayside like we’ve never seen before,” Ly said. “You don’t think of small businesses as a rallying cry or a cause – you think of homelessness, you think of low-income families, those are things that you think about.”

But with so many businesses shuttered, Ly said, Comcast began rethinking this perspective. Through conversations with GSBA, the company determined that emergency funding was the best way to provide support, starting with the Ready for Business Fund grants of $2,500.

Comcast is the primary funder of the grant, while GSBA provides businesses with practical support, including GSBA membership, business training and facilitating connections to other grants and funding resources.

“If you're like myself, if you're an immigrant and English is not your first language and you have to go through this application process and there may be language in there that doesn't quite make sense to you,” Lohrey said. GSBA staff can help businesses navigate this process.

The Fund is here to stay, Lohrey and Ly said, because supporting small businesses means supporting your community. “Small businesses are the heartbeat of our economy,” Lohrey said. “But mostly they shape the communities that we live in, and also work in.” Lohrey hopes the grand will become a sustained funding source that can benefit businesses for years into the future.

A flower farm, Yang Farm, was among the Ready for Business Fund recipients in 2021. For Xee Yang-Schell, who works with her parents on the farm, the grant was a vote of confidence for the small family farm. “It definitely helped a lot to know that people cared about us, and wanted us to succeed,” Yang-Schell said of the grant.

Demand had been erratic for the farm during the pandemic, she said. They would be extremely busy, then quiet, in a rollercoaster dynamic that many businesses encountered during the COVID-19 pandemic. “The challenge has been knowing how much to grow, and how much to take to market and things like that more on the selling side,” Yang-Schell said.

The variation impacted the farm’s bottom line. At the beginning of the pandemic, Yang Farm didn’t send representatives to farmers market for nine months. Instead, they got creative and sold at other locations, including outside of a bubble tea shop. But Yang-Schell said pivoting sales this way required significantly more work than usual. “It was new territory we hadn't gone into before, it was new challenges we hadn't faced before,” Yang-Schell said. The grant money from the Ready for Business Fund made up for the income Yang Farm wasn’t making due to the pandemic.

A similar situation presented itself to Grayson Crane, a first-generation farmer like Deitering, and the owner and operator of Pink Moon Farms, which also received a Ready for Business Fund grant in 2021.

Crane began working on farms in 2010 while earning their undergraduate degree, and they found they loved the work, the physicality of it, as well as the long and slow process of growing food. While Crane was hesitant to open their own farm after working on five others, they were ready to be their own boss and start Pink Moon Farms. “You get to a point where … you want to experiment and make your own decisions,” Crane said.

The farm, which produces meat, eggs, fiber products and a variety of produce, is now in its fourth growing season. It’s raised livestock for six years.

Like Deitering, Crane used the Ready for Business Fund money to install fencing around the farm. The investment has helped them sleep better at night by mitigating potential long-term problems. “It has really expanded the space that we can graze, which has been really important for animal health, but also just for general climate resilience and management of our pastures,” Crane said.

Farm to table — in a pandemic

When the pandemic hit, Deitering of Chubby Bunny said he wasn’t concerned about the business until the farmers market where Chubby Bunny sold closed down. Farmers markets make up 70% of their sales, and they worried the other market they sold to would close as well. “That left us scrambling trying to figure out exactly what are we going to do with all of our produce,” Deitering said.

Like Yang Farm, Chubby Bunny pivoted operations. They got involved with a Community Supported Agriculture (CSA) program connecting consumers with farm-fresh produce. The program worked well in 2020 and 2021, but Deitering said he’d seen a drop-off in buy-in this year. “I think that people are starting to be a little bit burnt out on it,” he said. “Not on ours in particular, but on CSAs in general. I think that a lot of people are just kind of burnt out on the whole new normal.” So, he’s shifted that energy back into farmer’s markets, one of which has now reopened for the first time in two years.

There’s still challenges to be had on the farm, chief among them inflation. Deitering said the price of the feed he buys for his chickens has gone up 40%.

For Crane of Pink Moon, the pandemic made them think more about disturbances that can impact farming businesses and people themselves — not just COVID, but the racial reckoning and social justice protests that began in the summer of 2020. “The pandemic, and also the rise of political unrest and white supremacy in our region, and in the US, has woken me up a little bit more around what thinking we need to do to be safe and strategic long-term,” Crane said.

One positive development to emerge from the pandemic was the establishment of direct distribution lines, allowing people to buy produce directly from local farms, or for excess food to be delivered to those in need. These shifts made Crane realize how quickly systems can mobilize for action when there is concentrated effort behind them. But now many of those programs are ending.

The future, and all its problems

At the beginning of the pandemic, businesses faced challengings like setting up online ordering or purchasing personal protective equipment, but now, concerns are focused on inflation and labor shortages. Prices have risen for most items Deitering needs to keep the farm running. The cost for any type of material to build structures has also gone up, and Deitering said he’d been chomping at the bit to get approval to build a greenhouse, because costs are rising weekly. (While he was speaking with Crosscut, Deitering got word that he was finally scheduled to build the greenhouse.) Inflation has also hit farms’ consumer base, and Deitering said customers are less likely to buy products they might see as luxury items, including produce from a local farm.

Yang Farm sells flowers at Pike Place, but Yang-Schell says people seem less willing to spend money on such kinds of purchases due to inflation and economic uncertainty.

This spring has been hard on Western Washington farms for another reason, too: It’s been one of the wettest and coldest springs in years, making planting difficult, Deitering said.

Shifting weather patterns due to climate change is something Crane of Pink Moon Farms is particularly worried about. “Whether that’s wet springs, hot summers, wildfires — it all impacts our ability to produce food and our work environment,” Crane said. Crane said their community has been resilient and clever in the face of these changes, but more tangible resources are needed.

Still, Crane, Deitering and Yang-Schell are motivated to keep going. “I think that feeling of being outside and doing things with my body and producing and making things was something I really enjoyed as a kid,” Crane said. “And especially as a young trans and queer kid living in an environment that wasn't always very supportive, being outside felt liberating.”

Even through the ups and downs of the pandemic, Yang-Schell said her parents have weathered the storm in ways only farmers can. “I think that when you are a farmer, you are so much more resilient than the general population,” Yang-Schell said. “It's quite admirable working with my parents and seeing how truly strong and resilient they are and how accepting they are of whatever comes and just having the courage to face [it] head-on.” 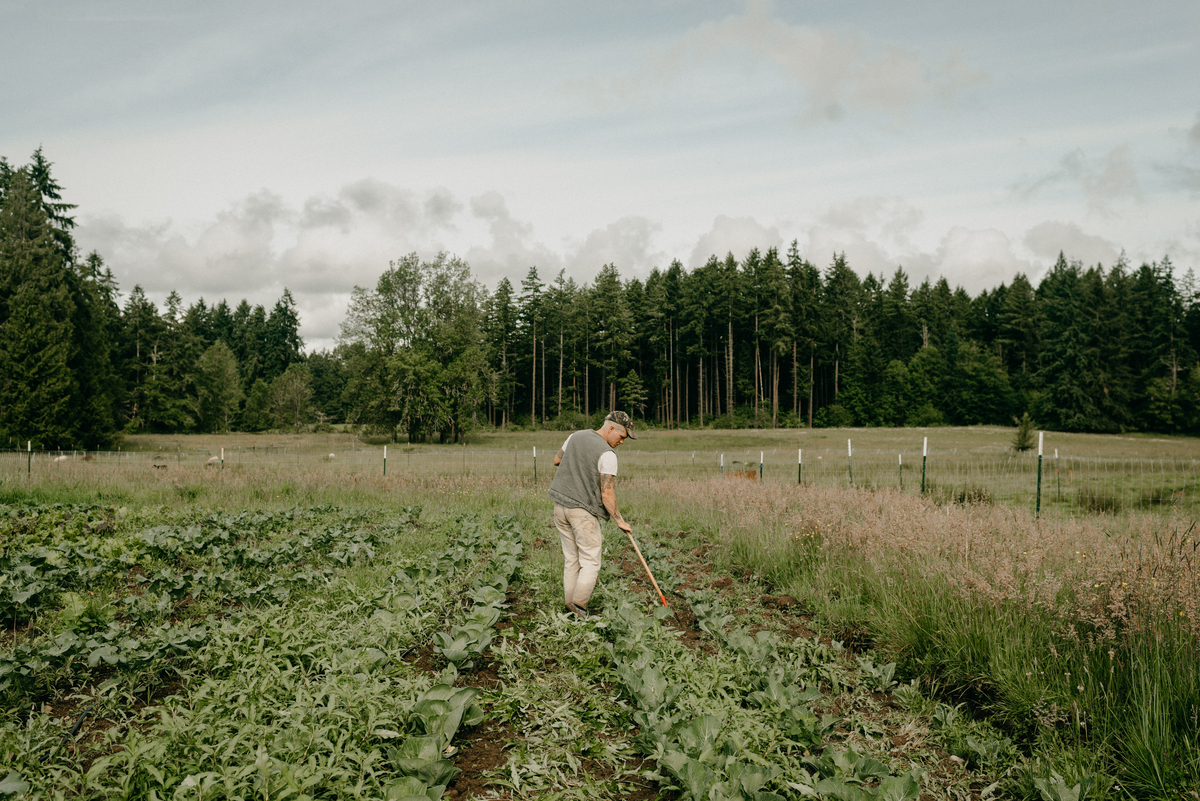 Grayson Crane, of Pink Moon Farms, works on their land in rural Washington. “There’s all kinds of barriers that our community faces," they said. "So, I wanted to create the farming workplace that I wanted to work at.”

Learn more about Comcast's activities in communities around the country at http://corporate.comcast.com/our-values/community-investment and about Comcast in Washington State at https://internetessentials.com/.