In Yesler Terrace, residents help each other bridge the digital divide 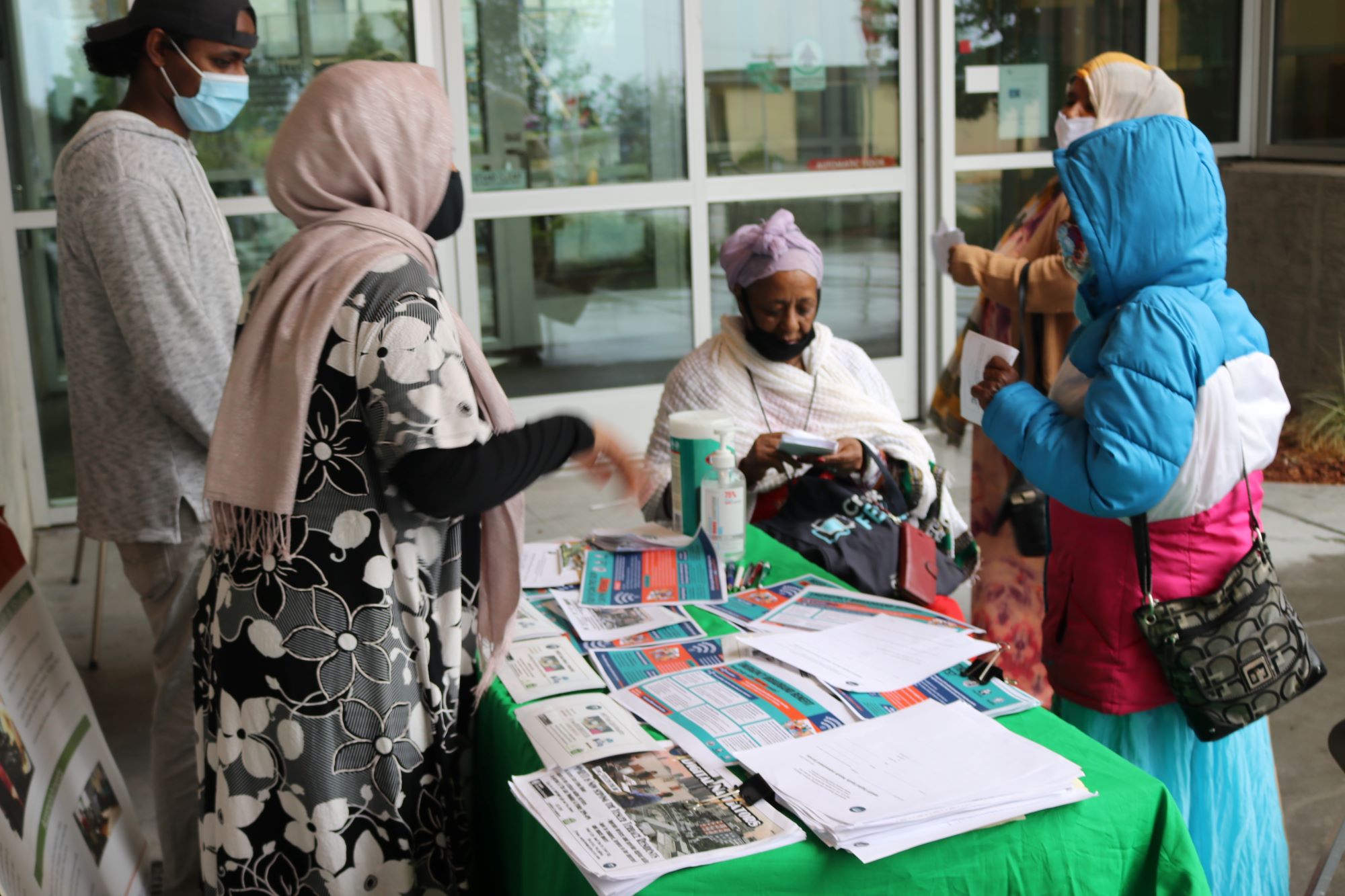 MMRTI volunteers and residents at Yesler Terrace in Seattle. Photo courtesy of MMRTI.

MMRTI volunteers and residents at Yesler Terrace in Seattle. Photo courtesy of MMRTI.

When the COVID-19 pandemic first hit the Northwest, Said Mohammed knew it would have major consequences in his community. In Seattle’s Yesler Terrace neighborhood, where he lives, Mohammed worried his neighbors, many of them immigrants, would face barriers to online resources.

But as an immigrant himself, Mohammed also saw an opportunity to help. Mohammed came to the United States in 2018. He was 14 years old. “I had no one to help me,” he said. Though his parents immigrated at the same time he did, he was more comfortable with technology than they were, he said, so he felt he had to rely on himself to prosper using the internet.

So when COVID hit, he wanted to assist people who shared his own language and experiences as they adjusted to a new digital reality. As a youth leader and tech specialist with the Multimedia Resource and Training Institute (MMRTI), Mohammed now serves his community, helping others to avoid the feeling of isolation he remembers. “I want to make it easy for the younger generation,” he  explained.

MMRTI is a youth-focused community technology program that trains young people to engage their community through technology. “We have these young media makers, actually navigators, who happen to be helping their community,” said Assaye Abunie, MMRT’s executive director.

MMRTI began the digital navigator program as a pilot project for the Seattle Housing Authority during the pandemic, with the goal of connecting people with digital resources. With technical support from internet-service company Comcast, the program is building digital equity in communities like Yesler Terrace.

Yesler Terrace, where MMRTI’s  program operates, is a very diverse neighborhood. “There are so many East Africans, African Americans, Asians…  and we are glad, really, to have young people who are born and grow up here,” Abunie said. “And they are our advocates. They are the community [outreach volunteers]… The navigators speak eight languages between them, easing the language barrier that might prevent folks from getting help.”

MMRTI serves a community that often faces significant barriers to technology. About 90% are low-income, Abunie said. So the program’s first order of business was to get folks connected with devices. Mohammed spent many of those early days finding out what devices people already had, what devices they needed, and whether they already had internet access or could obtain it through a program like Comcast’s Internet Essentials, which offers subsidized internet access to households participating in federal assistance programs, or whose combined income is at or below twice the federal poverty line. In the early days of getting folks situated with technology, Comcast connected MMRTI’s client base with low-cost laptops and internet access.

Mohammed said MMRTI was able to register 60 households for the Emergency Broadband Benefit program, now the Affordable Connectivity Program, which is a federal grant providing financial assistance to households who have an income at or below 135% of the Federal Poverty Guidelines.

He remembers working with one woman in particular striving to help her mother connect to the internet.

“She was from West Seattle, but her mother lived here, in Yesler. So she wanted to register for her mother. So she went back and forth.. about four times,” Mohammed said. “In the end, we were able to register her, and she was eligible, and she was able to get the money. I was really happy at that moment. I was like, ‘Now I know why I'm doing this work.’” 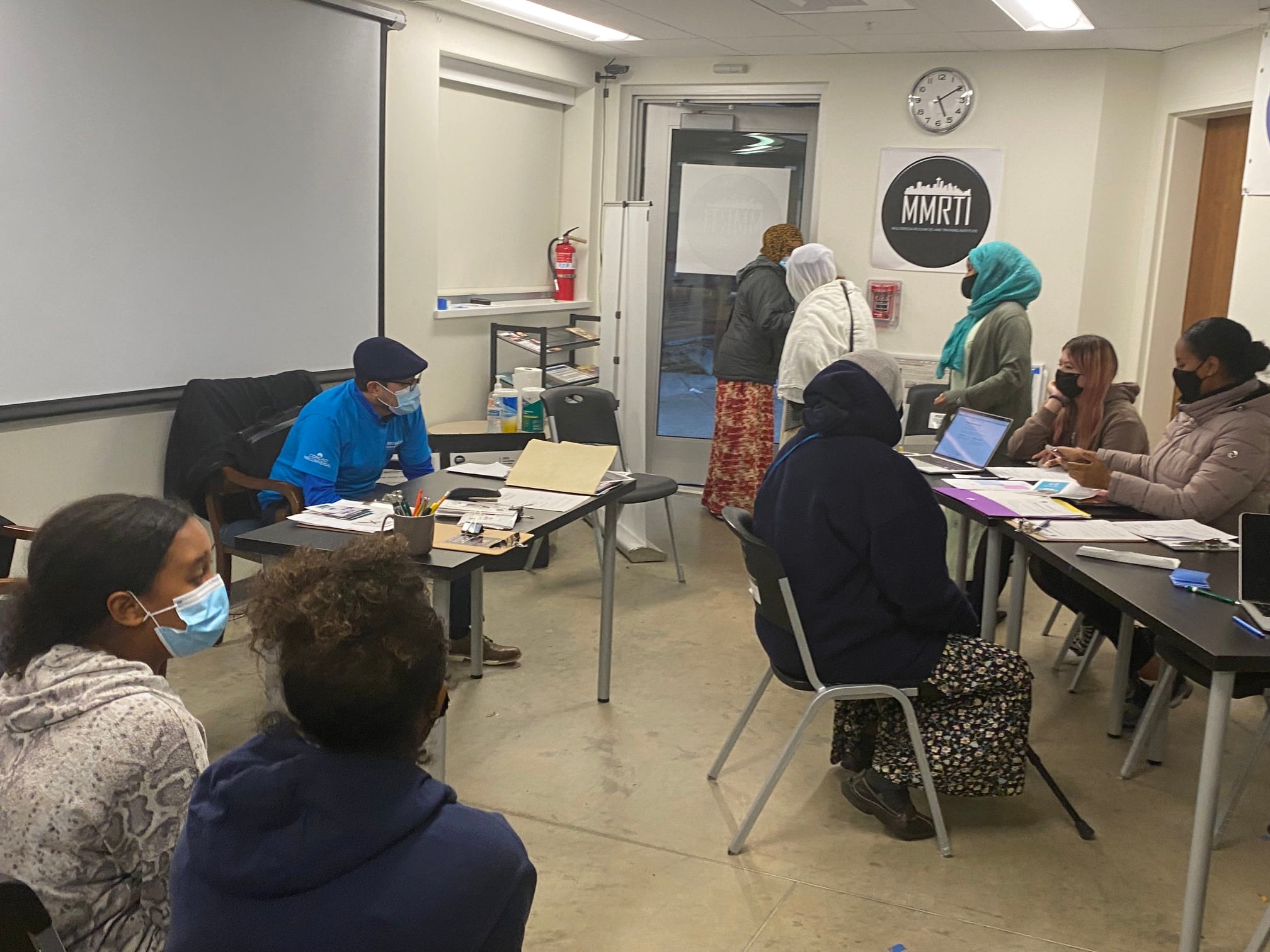 A community-led effort for digital equity

As one of the volunteers who helps MMRTI connect residents in Yesler Terrace with internet and equipment, Sarvar Abdukarimov considers it his primary goal to to bridge people and the internet services they need. During the pandemic, said Abdukarimov, who is also an Xfinity Community Representative for Comcast, it became clear “that being connected to the internet and to the world is very important.” He saw this reality play out in his own home, when his son’s school went online and Abdukarimov  himself had to pivot to working from home.

Like Mohammed and Abunie, Abdukarimov is an immigrant. When he came to the United States in 2001, he said, “a lot of good people helped me to settle.” With this in mind, Abdukarimov said one of the primary objectives he strives for is “to give back to everyone who needs help.”

Those needs are clear. In his work with MMRTI, Abdukarimov has found that many Seattleites are not aware of affordable internet service options available to them. But Internet Essentials and the Affordable Connectivity Program are two options that have “opened up more avenues to see where other opportunities are” and identify folks who could benefit, he said.

One client, a man living on Yesler Terrace, needed better internet service that could accommodate all three of his children attending school online simultaneously.

MMRTI’s services “changed their world because now the kids were able to do their homework at the same time,”Abdukarimov said. “All three laptops could be connected.”

MMRTI has also been holding training sessions for residents to learn how to apply for these low-cost internet programs and how to use technology basics like email.

Community is what empowers this work for Abdukarimov—and for Abunie and Mohammed, all making a difference on Yesler Terrace by connecting their neighbors and peers  to increasingly vital technologies.

For Mohammed, Yesler Terrace is his home. “I know [the] majority of the residents, and I know who needs help,” he  said.

And he’s even making a difference in his own family. During the pandemic, he helped his mother learn new skills. Her digital literacy was limited, but with support from Mohammed and his sister, he said, “She honestly improved. I was really happy.” She is now working at a job which frequently requires her to use email.

Learn more about Comcast's activities in communities around the country at http://corporate.comcast.com/our-values/community-investment and about Comcast in Washington State at https://internetessentials.com/.