Best of 2015: The Cascadia megaquake – 3 experts weigh in on what to expect 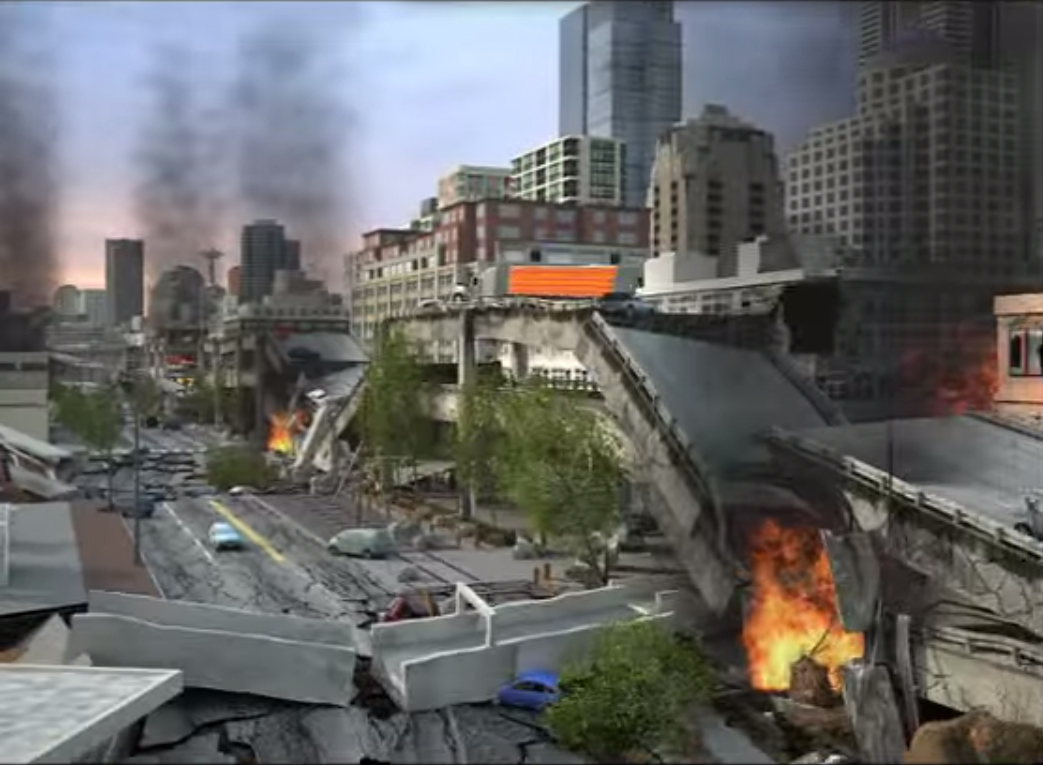 Is the Pacific Northwest about to be wiped out in a massive earthquake? A New Yorker article on the region's seismic vulnerabilities has provoked widespread interest in the subject, if not outright panic. At issue is the Cascadia Subduction Zone, which is primed to unleash an earthquake that may go down as America's worst natural disaster in recorded history. From the piece, one quote has stood out from a FEMA regional official: “Our operating assumption is that everything west of Interstate 5 will be toast.”

To tamp down on any misconceptions out there, Reddit hosted an expert panel on the subject Tuesday, fielding questions on the Pacific Northwest's impending demise in an AMA (Ask Me Anything) session. The participants were John Vidale, director of the Pacific Northwest Seismic Network; Debbie Goetz of Seattle’s Emergency Management Office; and Sandi Doughton,  science writer at The Seattle Times and author of Full Rip 9.0: The Next Big Earthquake in the Pacific Northwest.

Q: Did you see inaccuracies in the New Yorker article or was there anything about it that bothered you?

Vidale: Overall, it was a well-written and documented article. The scenario left an impression of much greater devastation [than] is anticipated to occur, however. [Asked to elaborate, specifically about the aforementioned I-5 quote] Yes, you put your finger on the quote most easily taken out of context. Communications may black out, transportation may grind to a halt, stores conceivably could run out of goods for a while, but that doesn't constitute "toast" in one's mind. The speaker must have been referring to some aspect of those problems, not to smoking rubble.

Q: This is a very selfish question. I love Seattle. A lot of my friends are there, my GF has an interview for a job in town, and it's a place where it'll be relatively easy for me to find work. Assuming we make the move, what should we consider when looking for housing to minimize our own risk in the face of this danger?

Doughton: I live here, and I personally wouldn't advise anyone to stay away from this beautiful region because of earthquake risks. Some things you might consider when choosing a house: A newer home will be built to stricter codes; if you choose an older home, make sure the house is bolted to the foundation; avoid steep slopes; look for something on solid ground, not fill or loose soil. (You can find geologic maps of the area, or hire an engineer to advise you.)

Q: Hi, I live on the Southern Slope of Queen Anne. My sister lives on the water in Normandy Park. We are wondering what would be the best thing to do when this earthquake hits?

Goetz: We expect most of our homes and structures to fare relatively well, especially if you are a wood-frame construction. For condos, there are other ways to reinforce the structure - it's worth having a structural engineer do an assessment. Check with your homeowner's association. For homeowners, especially for homes built before around 1980, bolting the house to the foundation through seismic retrofit will help it survive.

Q: What are the chances "the big one" will never come in our lifetime? How much do most of us not understand about probability and statistics when it comes to natural disasters like earthquakes?

Vidale: If the chance it will come is 15%, the chance it won't come is 85% (if we're expecting to live another 50 years). However, there are plenty of "pretty big ones" to worry about as well, so you're overwhelming likely to see some action in the PNW.

2. What will topple in the next big quake?

Q: How would the skyscrapers and the Space Needle in downtown Seattle fare against the big one?

Doughton: Almost half the tall buildings in Seattle, Portland and Vancouver BC were built before anyone knew we could get this kind of megaquake in the Northwest. It wouldn't surprise anyone if some of those older buildings collapsed in a major quake. Newer skyscrapers are much better designed, but under current building codes, all they have to do is NOT collapse. If the building is completely unusable after the quake, that's fine per current codes.... The Space Needle was built with redundant support systems and the heaviest steel available. I'm betting on it to survive.

Q: We all know the Alaskan Way Viaduct is toast, but are any of the other major transport routes in the Seattle area particularly vulnerable? I-5 ship canal bridge? I-90 floating bridge? Is Seattle going to be completely cut off if the big one hits? Is it time to move to Spokane?

Doughton: Hundreds of bridges in Washington have been retrofitted, including the ship canal bridge. But hundreds more haven't been. Washington's resilience plan estimates it could be months before all major transport routes are reopened, though emergency routes - the airport, etc.. - will open up before that. But parts of Seattle will definitely be isolated, which is why the recommendation is to be able to survive on your own for at least three days and perhaps a week. The coast is expected to be cut off completely, probably reachable only by boat or air.

Q: When did Seattle structural code begin to require buildings be designed to withstand a megaquake, if ever? Without an early warning system, what is the best thing for someone to do if they're living or working in a structure that is not likely designed to stand-up in the Really Big One and they feel the first pulse?

Doughton: Seattle first began to factor quakes in its building code after a quake near Olympia in 1949. Bigger quakes didn't begin to be factored in until the mid-1990s. Even today, the building code does not require consideration of how long the ground will shake, just how hard. Oregon is in much worse shape, because it didn't even consider quakes at all until the 1990s.

Goetz: We expect most highrises in Seattle to shake and sway, but ultimately stay standing. When you feel the first pulses - take a quake-safe action - within the first 30 seconds, get somewhere secure like under a table, desk or countertop, and prepare to ride it out. For highrise residents - it's not practical to think you can leave the building - stay in place where you are during the shaking. Afterwards, the conditions outside may actually be more hazardous than inside.

3. Is it just Seattle that needs to worry?

Q: Will the earthquake reach places like Redmond, Bellevue, and Kirkland? If so, will it be very severe?

Doughton: Yes, the shaking from a coastal megaquake will be felt in all those areas. We also have shallow faults in the Puget Sound region that can generate local quakes that can be very damaging. For the M9 megaquake, the shaking on the east side of Lake Washington won't be bone-rattling, but it will go on for a very long time - perhaps 5 minutes or more. For a quake on a local fault the shaking can be much stronger and more intense.

Q: Could Edmonds be hit by a tsunami generated by (the) Seattle Fault?

Doughton; Yes, it could. The last known quake on the Seattle Fault occurred about 1,100 years ago, and evidence of the tsunami was unearthed at West Point, in Seattle (Magnolia) and also on the south end of Whidbey Island. Washington DNR has created maps of areas likely to be flooded by a Seattle fault tsunami - you can find them on the web.

Q: What about Eugene/Portland? Similar damage/problems to Seattle? Would you advise people to be moving from the area?

Vidale: Portland has a bit less of a problem than Seattle. It doesn't have the massive basin underneath to amplify the motions and is a little farther from the Cascadia fault.

Doughton: Portland's buildings are more vulnerable, because Oregon didn't adopt a seismic code until ... the late 1980s. (They thought they were immune from quakes!) Most of the bridges downtown are really old and aren't going to stand up to much shaking. Also, most of Portland's fuel supplies (gasoline, jet fuel, oil) are concentrated on the banks of the Willamette, on ground that's going to liquefy. On balance, I think Portland is going to suffer more. Seattle's utilities are very vulnerable, but some of our major bridges through town - the Ship Canal and the 99-bridge, have been recently upgraded. In both cities, neighborhoods will be cut off and folks will have to get by on their own for quite a while - days, maybe weeks - because emergency responders will be overwhelmed.

Q: What's the chance of previously dormant cinder cone like Mt. Tabor or even worse, not-so dormant Mt. Hood/St. Helens/Bachelor/Sisters, joining the party once it kicks off?

A: About 10% of great earthquakes trigger a volcanic eruption, and most eruptions are fairly minor, so the volcano risk is small compared to the earthquake risk.

Q: When we say "Seattle", will the earthquake disaster/tsunami actually hit the city of Seattle? Or are we referring to the coasts of WA? In other words, do the people within Seattle (downtown, etc) and even neighboring cities like Bellevue, have to worry about these affects and 100ft waves?

Q: Any chance of a NW quake setting off the Yellowstone caldera?

Vidale: Zero. And a Yellowstone eruption is so unlikely and so prevalent among questions from the public that it is a major source of irritation to many scientists.

5. How prepared will we be?

Q: Will Seattle (or anywhere in the PNW, really) ever implement earthquake early warning systems as mentioned in the New Yorker article about Japan?

Vidale: We are currently testing earthquake early warning in the Pacific Northwest, in fact I have it on my phone now. It needs more testing and full funding before it is ready to be released to the public, however.

Q: Is the city of Seattle working on having an emergency plan?

Goetz: Yes, there are several plans in place and in development, including a Mitigation Plan, a Recovery Framework. Here is a web link for the City's plans: http://www.seattle.gov/emergency-management/what-if/plans... Also, Seattle did extensive work as part of a Regional Catastrophic Planning Effort. All of those plans are on the State of Washington's web page: http://mil.wa.gov/other-links/plans

Q: How realistic is it that 3 days' supplies (the minimum recommended) will enable my survival of the Very Big One in Seattle? And how many days' supplies do you personally have in your home ready for an earthquake?

Goetz: We recommend people prepare themselves for 7 to 10 days vs. three. For a major quake, life won't be back to "normal" after just three days. I've got enough at home to make it through a week, and also keep a stash of stuff in my car as well as at work. Beyond supplies, I always encourage people to talk about their plans - especially around communication, which we know will be affected. Where will they be? How can they get back together? Where could they meet if not at home?

Q: This is a bit dreary question, but how likely do you think people in Seattle/Portland/etc. are to actually pay attention to the data and start preparing for potential earthquakes?

Doughton: Human nature is the same everywhere. Some will pay attention and get prepared, others won't. We all need to press our state and local governments to improve infrastructure so the region will be able to recover more quickly.