Best of 2015: Why the city's new buildings often look the same 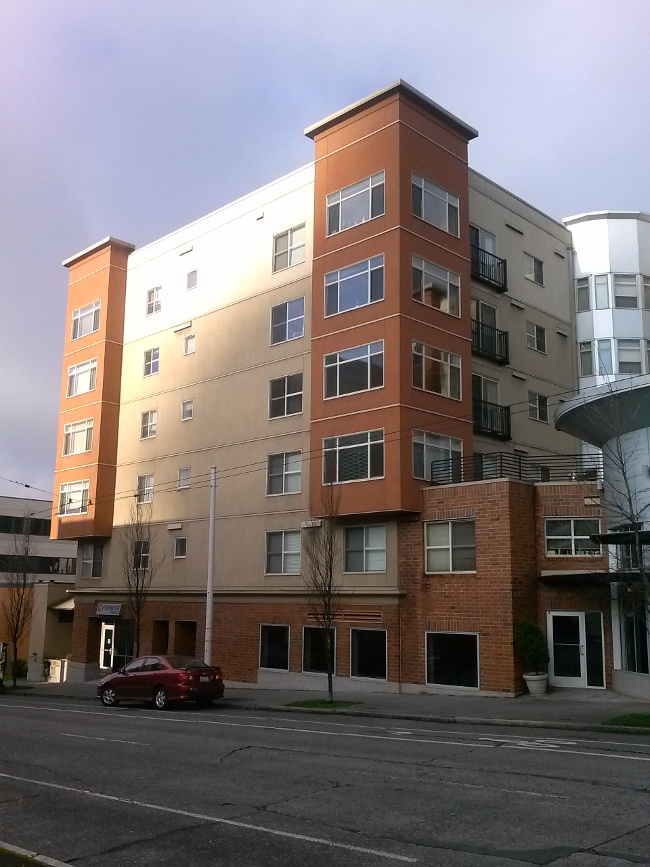 The generic design of many "5 over 1" buildings presents blank walls at street level and seem divorced from their surroundings - like this one on Queen Anne near Thomas.

This is the first in a 2-part series on changes in Seattle's built environment. You can read Part 2 here.

Tucked into a side street in Seattle’s International District is a three-dimensional metaphor for the changes being seen all across the city.

The delightful Eastern Café is bounded by two long interior walls. The south wall is layered with many decades of paint, some of it peeled off to reveal the handiwork of past owners and purveyors of goods and services. The wall is chipped and battered, possessing a richly colorful and eccentric patina. The other wall is made of gypsum board, a synthetic product of the 20th century that replaced hand-built lath and plaster for interior walls. It is flat and boring with a relentlessly perfect smoothness and uniform beige color that add to the monotony.

The contrast between these two walls is being writ large across the city, with large blocky new apartment buildings replacing smaller scale, often idiosyncratic structures. In many neighborhoods behemoth projects consuming entire blocks now rise up eight stories. A number of developments in Ballard reflect this shift in scale.

Occasionally, we get a flash of design brilliance with forms, patterns and compositions from creative minds. Some of the recent development along 12th Avenue East on Capitol Hill falls into this category. But in most cases, new buildings are wrapped with the external version of gypsum wallboard; they are repetitive, flat and featureless.

The reason for this visual "meh" can be traced back to the early 90’s when the City of Seattle did something that no other city in the country had done: It adopted a building code which allowed a never-before-seen, hybrid form of construction. The development industry calls it “5 over 1”; that is, multiple floors of light wood-frame construction erected on top of lower floors made of concrete. (In the lingo of building codes, wood frame construction is called “Type 5”; fire-resistant, concrete construction is “Type 1.” Hence the "5 over 1" nickname.) In some cases, this code has been literally translated into five floors of wood frame over one floor of concrete, but it can also be six levels on top of two.

One rationale for this hybrid approach was lowering the cost of construction and, therefore, the price point for the consumer. Prior to the code change, buildings taller than four stories had to be built with much more expensive materials and systems. Over the years, as dozens of 5 over 1 structures went up in Seattle, fire marshals around the country watched to see if residents would be consumed by conflagrations. When that didn't happen, building codes were changed to allow 5 over 1 anywhere.

Since Seattle has been at this longer than anywhere else, the city also discovered a basic flaw in the 5 over 1 approach. Because wood expands and contracts in response to changes in weather and moisture content, certain types of rigid materials used on building surfaces pull apart at their seams, leaving cracks that wind-driven rain can penetrate. And penetrate it did.

Along with the accompanying mold and mildew, water damage led to massive insurance claims, litigation and costly repairs. For more than a decade, numerous buildings around Seattle were cocooned in plastic wrap while their exteriors were being reconstructed. As it turns out, only a few materials perform well when stretched across many floors of wood framing. Many of these materials, such as "Hardy" planks and metal sheeting, are, well, as boring as sheet rock, aesthetically speaking.

Thankfully, in recent years new exterior materials have become available that can convey a richer character and perform well over time. But despite the wider array of choices, the results can be either overly repetitive or visually chaotic. As with any artful endeavor, striking a balance can be challenging.

There are ways to bring elegance to 5 over 1 structures, but it requires a high degree of skill and commitment. Only a very talented designer can take such a limited palette of materials and make the resulting building interesting, if not elegant. But developers must be willing to hire those skilled designers. Many are simply not interested. And this reveals a hidden flaw in the City’s design review process: No amount of process can “make” a designer talented or a developer committed to creating superb buildings. Hence, the wildly uneven — and often uninspiring — architecture in Seattle today.

Recently the rapid pace of development has exposed this construction-based flaw. There are scores of sites under construction, as documented by the wonderful SeattleinProgress.com. With tall steel cranes visible in every direction, the city seems besieged. In a sense, Seattle is a victim of its own success. With all the articles and rankings touting its culture, its music, its natural setting and its high-paying jobs are we really surprised that so many people want to move here? Even corporations that previously located in outlying areas — Weyerhaeuser, Facebook and Expedia, for example — are piling on.

The pace of development here has also been fueled by dramatic changes in the national demographic makeup. Households are smaller but more numerous. Boomers, who make up a quarter of the population, are downsizing and opting for more compact dwellings in urban places that offer transit, cultural amenities and high-quality health care. Millennials, another 25 percent of the population, are eschewing the suburbs in favor of density, diversity and public transit that only urban places offer.

Some middle-aged cynics suggest that Millennials will refill the suburbs once they have children. I’m not so sure. In sharp contrast to past generations, Millennials are putting off marriage and kids. Moreover, their values are rooted in lifestyles that only denser urban places can provide.

We are seeing a sea change in the preferences of younger Americans. For one thing, Millennials are acutely aware of the environmental damage done to this country by five decades of outward expansion into an auto-dependent landscape. Climate change is only one negative outcome of those growth patterns.

Right now, virtually every major metropolitan area in the country is seeing a significant uptick in the development of rental housing, often in the form of multi-story, stacked flats. This is due, in part, to the fact that financing for condominiums has been, until very recently, non-existent. But even if owner-occupied housing was more available, many Millennials would rather not be tied down by a house with 30-year mortgage. Given college loan debts, even those with higher incomes may not have enough saved for a sizable down payment on increasingly costly single-family, detached houses. No surprise then that apartment development is booming like never before. Seattle is not unique in this regard.

Last May, The Seattle Times made an assertion that has been repeated by politicians, journalists, and community activists: Seattle is the country’s fastest-growing city. Too bad the claim is untrue for the metropolitan area as a whole. We are not the fastest growing urban area; we’re not even in the top three. Those honors belong to cities in Texas according to recent research by Forbes Magazine.

One explanation for this claim, alluring or alarming as it might be, is that most national organizations monitoring urban growth look at entire metropolitan areas, not at the individual jurisdictions within them. This is because markets do not match government boundaries; the dynamics of an urban region are more complex than what can be described using data about individual cities. But rather than touting a dubious title we should instead be discussing how to shape the patterns of growth as well as the choices we offer.

In this region, growth and change are occurring in almost every city and town surrounding Puget Sound. We live in an urban region with “Seattle” as its collective avatar. Seattle may be seeing a decrease (aka displacement) in certain population groups, but those folks are replenishing older, inner-ring towns that were, not too long ago, mono-cultural bastions of the white middle class.

All cities change over time; that is their nature. Many Puget Sound communities are now a rich mixture of cultures with different customs, history, language, dress and cuisine. There are certainly downsides to gentrification. This trend isn’t one of them.

For the last decade, we have gone through an awkward period of adjusting to a whole series of changes. We have seen a rapid uptick in demand. Some developers are here merely to grab the gold; they seem to have little interest in creating lasting communities. Meanwhile, designers with wide-ranging abilities try to create buildings of larger scale and higher densities and they frequently miss the mark.

And even more changes are coming. Within the next decade, we will very likely see a massive misalignment in the demand and supply of particular housing types. But that is another story.

Click here for Part 2: How Millennials - and Boomers too - are driving a need for more townhouses.