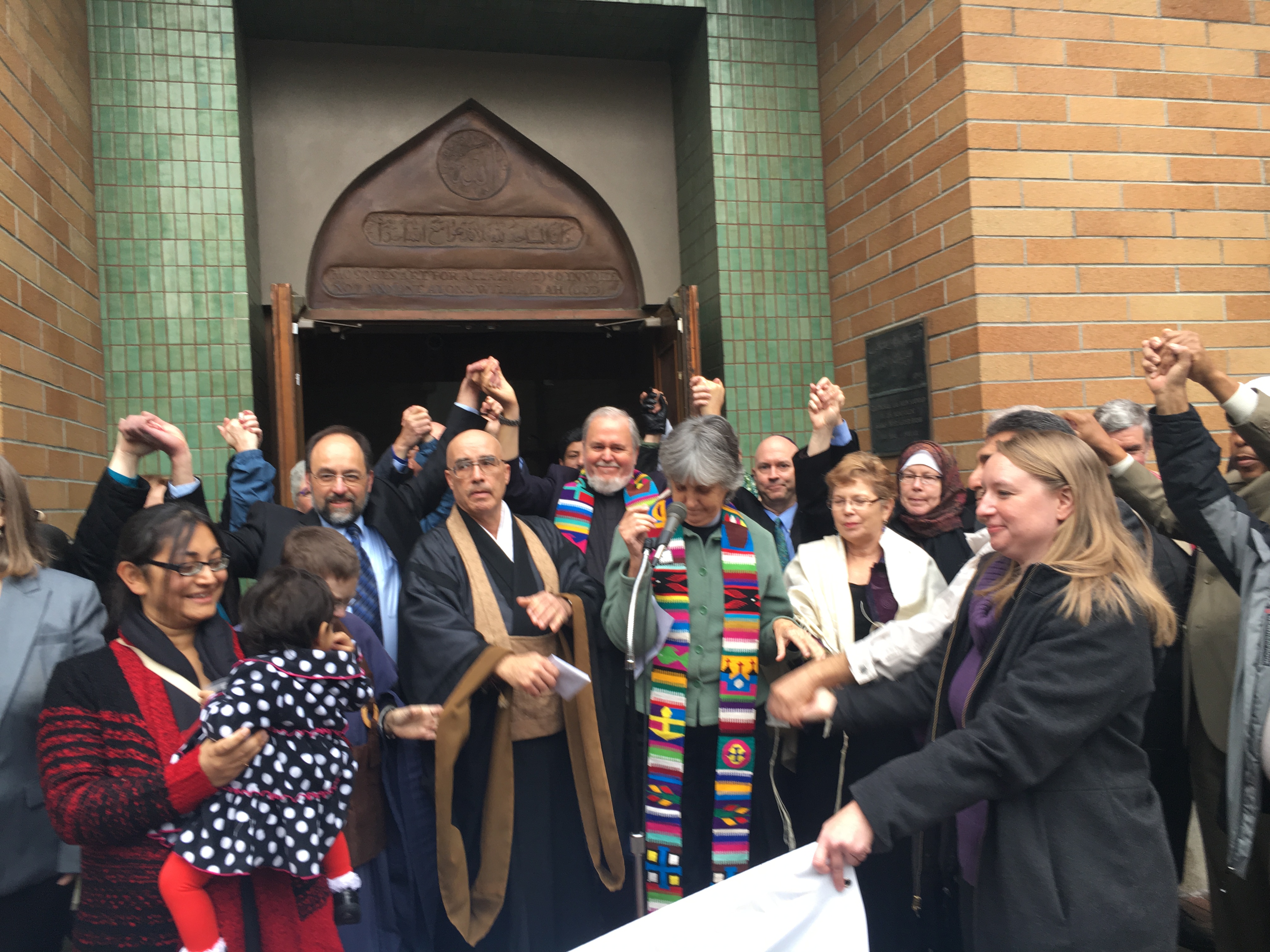 Religious leaders from across the region gathered Friday to support their "Muslim sisters and brothers."

The fears of Muslims in America have been on the rise since gunmen opened fire on Paris last November. That tension has hit Seattle hard over the last week amid anti-hate protests and a crime against an Uber driver Wednesday night.

The Seattle Police Department is investigating the Uber incident, at the same time that it is generally trying to be watchful for more trouble. That is nothing out of the ordinary, since the police often react locally to events on the national stage. When Planned Parenthood was attacked last month, for instance, officers were notified of the locations of all Seattle Planned Parenthood and similar clinics to prevent copycats. Likewise, after the shooting in San Bernadino, California, SPD focused patrols around social service buildings.

In light of the recent rhetoric around Muslims, SPD has adopted a strategy of putting extra focus on what might be at-risk areas in the Islamic community.

Amid the tensions, more than 20 members of the Faith Action Network gathered on Friday in front of North Seattle's Idris Mosque in solidarity with the Muslim community of the Puget Sound region. Under the minaret above Northgate Way, rabbis, priests, monks and Muslims spoke, occasionally alluding to the recent anti-Muslim rhetoric of Donald Trump and Washington state Representative Jay Rodne. “We say no to the fear mongering that has come from so many voices,” said Reverend Paul Benz.

The fear for Muslim Americans across the country has been that of physical and vocal backlash, a result of post-terror anxiety and Trump's speeches. “Hate crimes inquiries are opening around the U.S., amid suggestions that harassment of Muslims and people misidentified as Muslims may be on the rise,” read the New York Times Thursday. In Philadelphia, a severed pig’s head was left outside a mosque (Islam bars eating pork). In California, a Sikh temple — not even home to Islamic beliefs — was vandalized.

Arsalan Bukhari, executive director of the Washington chapter of the Council for American-Islamic Relations (CAIR), said Friday that, on a national level, CAIR has reported an average of one hate crime per day over the last several weeks. And, as the Uber incident reflected, Seattle is by no means immune.

Elsewhere, Seattleites have been hyper-sensitive to any whiff of fascism or hate crimes. A rally of more than 500 people marched through Capitol Hill last Sunday in response to a rumored white supremacist gathering.

After Hamza Warsame, a 16-year-old Somali boy, fell to his death last Saturday off a Seattle Central Community College balcony, more protests formed as many suspected it was the result of a hate crime. Police have reportedly been talking to the family about their investigation, but officials have said little publicly.

Mike Hogan, a King County prosecuting attorney who handles hate crimes, says, "I think it’s a fair statement that there is a rise in fear and anti-Muslim violence in the recent months. ... I think our local experience is consistent with that."

The Seattle Police Department heightened its focus immediately following the attacks in Paris. Part of that was a more general response, similar to the response to the Planned Parenthood attacks. But it was also grounded in at least two early reports of bias.

In the first incident, a man reported someone approached him at a community center and made reference to the Paris attacks, describing the attackers as "your people." Although, there were no reported specific threats or harassment, the incident was reported to SPD.

In the second incident, someone called an Islamic community organization and left a voicemail replete with slurs and threats. The bias crimes unit is still investigating.

Officer Lauren Lovanhill with SPD’s Public Affairs unit said that, in general, SPD is “doing what we’ve always done.” But at morning roll calls, officers are reportedly being made aware of Islamic schools, community centers and mosques in their particular precincts and patrols have been heightened. In some instances, SPD officers are reacting to requests from the community and in others, the department is acting on its own.

King County's Hogan said local law enforcement and criminal justice, including the U.S. Attorney's Office, the FBI, SPD and the prosecuting attorney's office, are working together to increase outreach.

The extra vigilance is registering in the community. President of the Islamic Center of Washington and Idris Mosque board member Hisham Farajallah said he has been quite pleased with the support from both the community and the police. “We trust the police,” he said. “We trust they’ll do the right thing.”

When Bukhari was asked if he has noticed heightened security, he said, “Oh yes. Given that we’ve seen more threats, local mosques have asked for extra police patrols during event times.” He lives just north of Seattle and is equidistant from three mosques. Mosques, he said, are not quite like churches in that membership isn’t quite so ingrained, so he tends to bounce around, and he said he’s seen more patrols at each.

But the fear is still there. Bukhari said he knows of a few mosques that have hired private security firms as a precaution. To really increase safety, he said, “leaders at all levels have a duty to speak publicly of the value and goodwill of Muslims in their community.” That way, the public will see Muslims as people, not part of some faceless demographic. Bukhari’s generally encouraged by the response of local leaders, but said, “we need to see more.”

The name of the man who was attacked Thursday hasn’t been released. According to the Seattle Police Department’s blog, three passengers hailed the driver for a ride from Southwest Seattle to downtown. The 36-year-old man harassed the driver the whole way, reportedly accusing him of being a member of a terrorist organization. When the driver eventually kicked the passengers out at First Avenue and Seneca Street near the Seattle Art Museum, the passenger punched him in the face.

The bias crimes unit is officially investigating the attack. Putting this unit on the crime puts a different lens on the investigation. The detectives have a better understanding of hate-crime laws and they have contacts with prosecutors who specialize in bias crimes.

Hogan of the King County Prosecuting Attorney's Office said he'd received preliminary material from SPD, but not enough to definitively call it a bias crime, or not. "We’d have to prove beyond a reasonable doubt that the victim was selected based on religion" or other person-specific characteristics. He said SPD is currently trying to get an in-car video from the incident.

With the country on edge, a bias crimes investigation can be especially important because the detectives are more likely to flag trends in reports of bias incidents and crimes throughout the city. The information is then shared with the whole the department. Command staff also talk about the patterns at their bi-weekly SeaStat meetings, which focus on crime analysis and strategy development.

Bukhari said he doesn’t know more about the latest investigation than what is already public, but said he would love to get the name of the attacked man so he could reach out to him and his family to offer support.

When the interfaith group gathered Friday, it was a cold morning and the mood was bittersweet. Sweet because of the symbolism inherent in a collared priest holding hands with a Muslim community leader holding hands with a rabbi. Bitter because the unity is the result of what Reverend Carol Jensen called "inflammatory, divisive speech."

But if the faith leaders needed reason to feel good about their community, all they had to do was listen to the cars and trucks driving down Northgate, honking and waving in support as they passed.