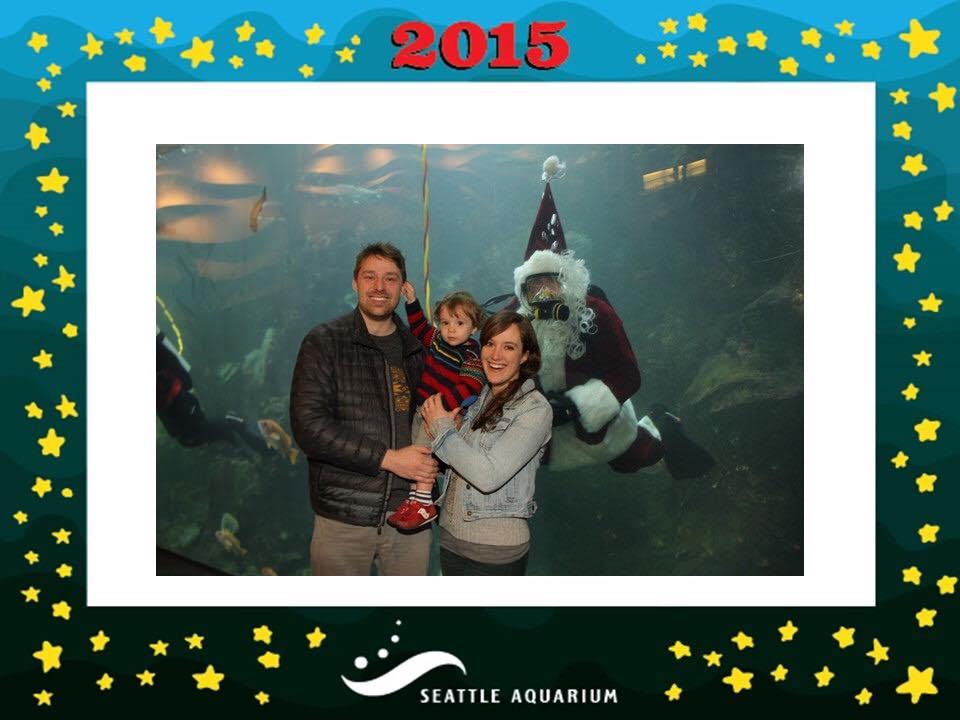 Here is something a little unusual to do this weekend — the opportunity to take a picture with a ...  scuba diving Santa? Grab your family and head to the 120,000-gallon Window on Washington Waters exhibit at Seattle Aquarium and check this one off your bucket list. Not only will you get your picture taken, but at 1:30 p.m. on both Saturday and Sunday, there will be live music, water and Santa! You're probably wondering, how does one scuba dive in a big Santa suit? Is the beard water-proof?

Seattle Aquarium Dive Safety Officer Jeff Christiansen said he takes a commercially available Santa suit and modifies it so it's saltwater friendly. "It's important to sew sutures and keep the suit in place under water and make sure air can come out so the suit doesn't balloon all over. There are also bubbles going into the hat to keep it pointy like an elf hat." As for the beard, it isn't really waterproof, but it is nylon. "Some beards are made of a variety of synthetic materials so we choose one that is neutral or negatively buoyant so it floats naturally like real hair does under water," he said.

In 2003, a group of thoroughly trained dancers decked themselves out in massive eyeliner, spandex and mullets and rocked the night away. I mean, they danced — to heavy metal, hard rock and the motley crew. They performed their Buttrock Suites, earning a devoted audience who would love them for years and pack houses. Then poof, they disappeared. Now it's 2016 and the metal-loving performers have returned with a new show called The Buttcracker, billed as a "silly raunchy hoot." It's an '80s hair metal version of the holiday classic featuring aerialist Cathy Sutherland, local fave Wade Madsen as Herr Drosselmeyer and a holiday hand bell choir that misbehaves. Likely the only time a dance show will prompt you to throw up the horns.

Here’s an immersive take on a public art project that began in 1992 on the streets of Greenwich Village and has since been replicated in 101 cities around the world. Folks download an app (iOS, Android) and gather at an appointed place — this time, it’s outside the On The Boards theatre in Lower Queen Anne — and at an appointed time, everyone hits “play,” creating a soundscape that accompanies the group as they roam the neighborhood. A community experience that takes caroling to a whole new level with holiday treats offered at the finale.

Have I mentioned that it’s dark?! Do a U-turn from that planned hibernation, don’t put in that bid on the house in Equatorial Guinea — the days are about to get longer again. Celebrate this inevitable fact by seeking solace in alcohol while trying new things at Stout’s Darkest Days Beer event. Over the three-day festivity, Stout will be pouring at least 10 ales of the dark persuasion, including stouts, porters and other limited run winter brews from Ballast, Two Beers and Alesmith, among others. There at least 10 other beers on tap to try, along with a huge bottle selection, cocktails and an inventive, tasty menu with offerings like cheesy cauliflower grits and chicken sausage and pistachio-basil pesto flatbread.

Olympic Sculpture Park during one of the special evening events throughout the year is always a can’t-miss affair, but nothing is quite as festive as its annual SAM Lights with all those luminaries dotting the path. Local band Lemolo provides the music; food trucks offer up grub; and artists Romson Regarde Bustillo, Sandra Farmer and Janet Fagan will help you create illuminated silhouettes and lanterns.