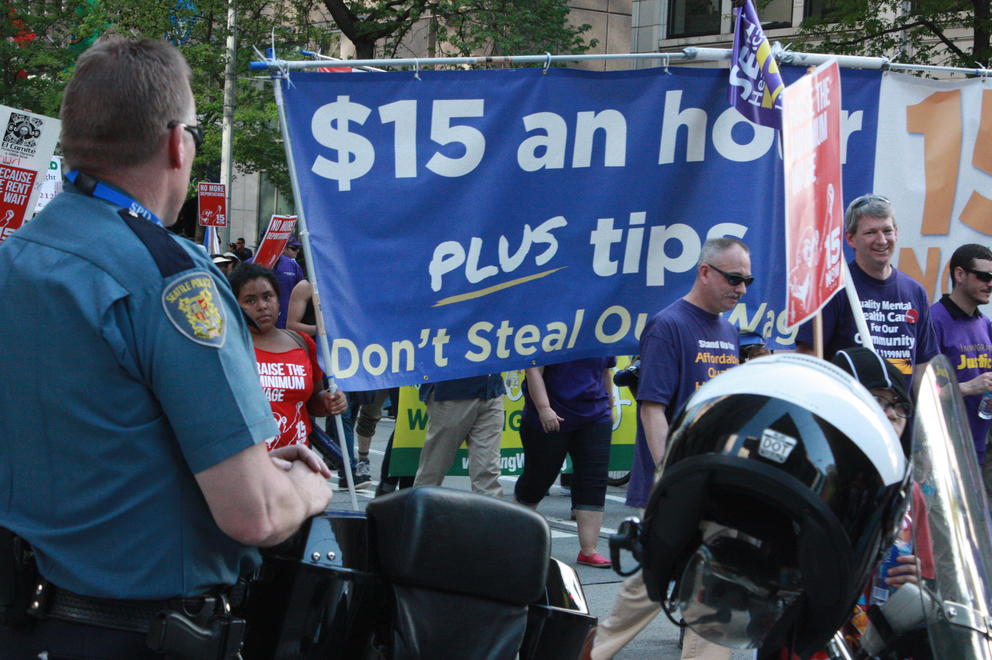 A demonstration in favor of the $15 minimum wage adopted in Seattle.

The good news is that people are taking advantage of Seattle's Office of Labor Standards (OLS) — the 9-person subsidiary of the Office of Civil Rights tasked with enforcing Seattle's suite of labor laws, including the new minimum wage. The bad news is that enough people have questions and concerns that it's unimaginable how such a small office could handle a city's worth of labor complaints.

With the City’s most recent bump in its minimum wage and the “ban the box” ordinance passed last summer – meant to reduce discrimination against those convicted of crimes – the number of cases crossing OLS’s desk have ballooned; the office currently has only three investigators for 112 open cases. Combined with the staggering number of inquiries and complaints from both employees and employers, it’s a wonder director Dylan Orr remains as positive as he does.

“We’re small but mighty,” he says.

OLS was established in 2014 after the City approved a $15 minimum wage. It got off to a rough start. When the first wage hike came last year, the Office of Civil Rights still had ads out on Craigslist looking for an executive director. Mayor Ed Murray sparked a bit of controversy when he sidestepped the final four choices for the role and hired Orr from the Department of Labor.

That means OLS has really only had its feet under it for seven months. Meanwhile, the minimum wage ordinance, paid sick and safe time, “ban the box” (officially known as Fair Chance Employment) and wage theft laws trekked along irrespective of who was there to enforce them.

Despite the minor controversy surrounding his hiring, Orr has been mostly praised for the work he’s done in his short tenure: staffing up the office, unveiling a public dashboard of enforcement statistics and, most impressively, working with the Mayor’s Office to roll out an enormous package to strengthen labor laws. It was passed by the Seattle City Council in December.

Outward press aside, Orr and his staff’s main duty nevertheless remains enforcement and education. Since June, OLS has received more than 1,500 employer inquiries – in the form of calls and in-person drop-ins – and more than 600 questions and complaints from employees. That’s about 70 a week.

The volume is only going to increase. “We got a new uptick with the bump in minimum wage [January 1],” says Orr. Employers, he says, generally lay out their situations and wait for answers, saying “this is how many employees I have or I’m part of a franchise network or I have business affiliates in other parts of the world.”

Regarding employee inquiries, many of them are complaints. As they come in, says Orr, the offices checks if they fall under the proper jurisdiction. If they qualify, OLS will open an investigation, not just into that one complaint, but of the entire company. “If one worker has contacted us that they’re not being paid the minimum wage, it’s likely others aren’t either,” Orr says.

Close to a third of complaints result in an investigation. The majority of the time, those investigations end in a settlement. OLS tells the employer the complaint and the employer agrees to work with the office to fix the problem. So far, only about fifteen percent of investigations have actually ended in a violation finding – which results in higher fines and penalties. The rest are either quickly dismissed or end in no violation.

Last year, OLS investigations paid out $177,000 to employees, mostly in back pay.

In his 2016 budget, Mayor Murray approved funding to hire two more investigators, because the burden of enforcement is only growing. The average length of an investigation is 127 days, but in December that number was up to 190 days or more than 6 months. While Orr is adamant that the quality of the investigations haven’t suffered, he hopes that the passage of the new labor laws in December will give employees more opportunities to resolve conflict without going through his office.

While he was hesitant to say exactly how many investigators he thought the office needed, he also didn’t say “five.” Orr will present this data to the Seattle City Council Tuesday, after which the City will launch an exploration of need. This council is very labor friendly, so it would not be surprising to hear advocacy on OLS’s behalf.